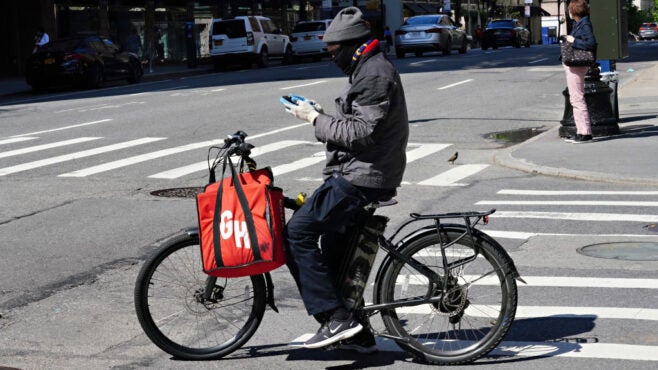 A Grubhub delivery person checks his phone during the coronavirus pandemic on 3 May, 2020 in New York City. (Photo by Cindy Ord/Getty Images)

US restaurants have been dealt a devastating blow in 2020. Buffeted by the forces of the pandemic economy, many eateries have turned to food delivery as a lifeline. But those using third-party delivery apps like DoorDash and Grubhub say their profit margins are squeezed by the platforms’ fees, especially where delivery has become the only game in town.

“We’re held hostage by the third parties – their fees and their marketing platforms,” says Scott Weiner, co-owner of Fifty/50, a restaurant group in Chicago. “It’s definitely been a love-hate relationship with them.”

City governments have stepped in throughout the year by passing emergency legislation limiting the fees these services charge restaurants. Typical agreements between restaurants and the platforms include a commission of 30% or higher on the total cost of each order placed through their sites, but local ordinances proliferated this year to limit those commissions to between 15% and 20%.

In December, Cleveland joined about a dozen other cities, including New York, Los Angeles, Chicago and Washington, DC, in putting a cap on the fees. Lawmakers are hopeful that the measures will not only give restaurants some much-needed support during the pandemic but also make way for long-term action to address the ways these Silicon Valley-backed companies have disrupted the dining market in US cities.

“We had this fight a year before the pandemic started. Other cities have reached out to us to ask more about what we’re doing.”

Soon after New York issued its first stay-at-home order in March, closing restaurants for indoor dining, City Council Member Mark Gjonaj recognised the trouble ahead for the city’s independent eateries. He advocated for a new cap on delivery fees, approved by the city council in May, that prevented the companies from charging more than 15% per order on deliveries and 5% on all other types of fees, or 20% overall. Gjonaj put forth a supporting bill prohibiting the services from charging restaurants for telephone calls placed through their sites that did not ultimately result in an order, which up to that point had been allowed.

“We had this fight a year before the pandemic started,” says Reggie Johnson, Gjonaj’s chief of staff. “Other cities have reached out to us to ask more about what we’re doing.”

San Francisco and Los Angeles, among other metro areas, passed similar measures in the spring that capped total fees at 15%. These mandates were initially meant to last until indoor dining resumed in some capacity, but the cities renewed them in the summer and fall as it became clear that such service would not be enough to sustain restaurants for some time. The measures will remain in place until indoor dining is fully restored to 100% capacity.

The delivery companies have come out strongly against the fee caps, frequently citing the adverse impact they would have on customers and delivery drivers. “A proposed cap on these fees would result in fees for consumers rising and service areas shrinking, cutting off consumers from the services they rely upon in this crisis,” representatives from UberEats, DoorDash, Grubhub and Postmates wrote to council members in Washington, DC. “Delivery people – who are currently relying on on-demand work opportunities to earn an income – would have fewer work opportunities and lower earnings.”

The Chicago City Council initially considered a much tighter cap of 5%, but after opposition from the companies (including Chicago-based Grubhub), it approved a 15% cap in late November. A week later, DoorDash began adding a $1.50 “Chicago fee” to customers’ orders to offset the reduction in restaurant commissions. Alderman Scott Waguespack, who sponsored the Chicago bill, saw the move as a direct response.

“The ordinance’s intent was to stop the price gouging by these companies,” Waguespack told Eater Chicago. “Their fee just piles more of the pandemic pain on restaurants and customers.”

DoorDash enacted a similar customer fee in Denver, which passed a commission cap in October. And the company’s attempt to offset caps in Washington, DC, by raising fees on its premium DashPass subscription was halted by the city’s attorney general.

Gjonaj would like to see New York’s fee caps made permanent. He has also proposed measures around such matters as increased transparency and broader worker protections for delivery drivers. Waguespack indicated similar priorities in Chicago, including reviewing deliverers’ status as independent contractors and the apps’ control over restaurant menus. They’re all efforts to more closely regulate an industry that has amassed power over the restaurant sector. The emergency ordinances in many cities reveal an existing tension between the delivery apps and the restaurants that benefit from their services. The measures are also intended to curb these companies’ increased control over access to consumers. Gjonaj and others are confident that the fight to regulate Big Tech delivery apps will continue well beyond the pandemic.

“The fee caps are nice,” says Weiner, “but they haven’t changed the overall game.”

Topics in this article : Hospitality , Megacities