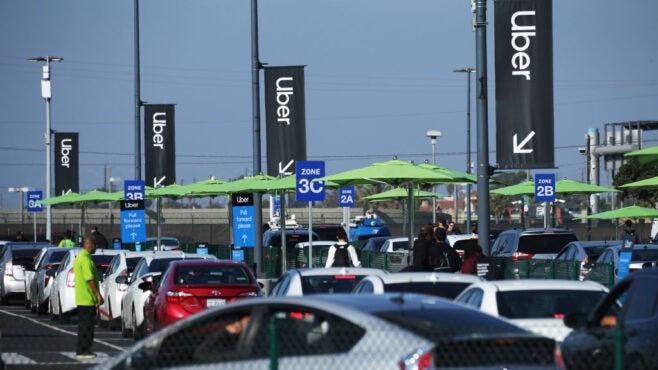 Uber drivers in California will remain independent contractors with the passage of Proposition 22. (Photo by Mario Tama/Getty Images)

After scoring a big win to override California’s gig-worker employment law on Tuesday, Uber, Lyft and other gig-economy giants say they’re ready to lobby for similar laws in other places.

California’s Proposition 22, which passed with 58% of the vote, definitively classifies gig workers in the state as independent contractors, not employees. The result is a significant victory for tech companies that rely on such contractors: they have been battling regulators and lawmakers for years over the status of their workers, and classifying them as employees would pose a threat to their business model because of the added costs of protections that employees get under labour laws.

The proposition was a repudiation of California lawmakers, who passed Assembly Bill 5 last year to classify gig workers – like Uber drivers and DoorDash deliverers – as employees. That status meant workers were able to access health insurance, unemployment protection and other benefits through the company. The thinking behind the law was that workers should be classified as employees, not contractors, if they spend the majority of their time in this work, provide an essential service to the business and cannot do the same work independently. Studies in multiple cities have shown that this largely describes the experiences of many ride-share drivers, who are predominantly immigrants and people of colour: they work close to full-time hours, consider the work to be their primary source of income and have few other job prospects.

California’s vote concluded the most expensive ballot-measure campaign in state history: Uber, DoorDash, Lyft and other players in the gig economy spent over $205m in the effort to override Assembly Bill 5. Now executives at the companies say they’re ready to take the fight elsewhere.

“Going forward, you will see us more loudly advocate for new laws like Prop 22,” Uber CEO Dara Khosrowshahi said Thursday in an earnings call with investors, according to Politico. “It’s a priority for us to work with governments across the US and the world to make this a reality.”

That sentiment was echoed by Lyft chief policy officer (and former US Transportation Secretary) Anthony Foxx, who indicated interest in taking the policy to the federal level. DoorDash CEO Tony Xu told the New York Times his company is now “looking ahead and across the country, ready to champion new benefits structures that are portable, proportional and flexible”.

Khosrowshahi and other executives have referred to Prop 22 as a “third way” that allows protections and independence for workers, and that’s what they hope to replicate it in other places. The measure includes a provision for a healthcare stipend and an earnings minimum equal to 120% of the local minimum wage ($15.60 for California in 2021). Still, a study from the Labor Center at the University of California Berkeley found that when all of a driver’s costs are taken into account, this comes out to as little as $5.64 per hour.

The companies’ success with Prop 22 suggests they won’t ease up on their tactics anytime soon. Uber and Lyft initially refused to abide by AB5 and pursued the ballot initiative to supersede the state legislature. The proposition effectively makes the contractor status quo permanent thanks to an unprecedented clause requiring a seven-eighths majority of the California State Legislature to make any changes to the law. While the companies can’t pursue ballot measures everywhere, they can replicate big-money lobbying campaigns to support similar policies in other jurisdictions.

“They’ve shown a willingness to spend what it takes to win,” says Ken Jacobs, author of the UC Berkeley study on Prop 22. “It’s very hard to overcome that kind of money.”

Still, “Big Gig” has significant policy fights looming in other places. This year, French courts upheld a decision to classify Uber drivers as employees, and similar cases are being heard by the supreme courts of Canada and the UK. In the US, New York City passed a wage law in 2018 that guarantees Uber and Lyft drivers $17.22 per hour after expenses. Seattle passed a similar bill this year. New York’s Governor, Andrew Cuomo, has hinted at legislation to address worker misclassification, and in New Jersey, one senator has introduced a bill similar to California’s AB5.

Jacobs cites the successes of New York and Seattle’s wage minimums as examples of effective regulation within the bounds of city government’s powers.

Employment status is hardly the only policy space where gig-economy companies have been sparring with regulators. Ride-share apps in particular worked hard early on to resist rules that blocked or restricted their ability to operate in various cities. More recently, they have focused on limiting regulators’ access to their data, which they compile on everything from traffic flows to driver pay. Last year, drivers in London sued Uber to get access to their own data, in a case that is now awaiting judgement in the UK Supreme Court. New York City similarly mounted a fight for data to pass its wage minimum law. After it was passed, reports emerged that Uber and Lyft were blocking some drivers from the app, which unions claimed was a method to limit the pool of those subject to the new higher minimums.

As the gig economy becomes a fixture of urban life, the question of worker misclassification isn’t going anywhere. The fact remains that labourers around the world rely on gig work, and study after study has shown that when the platforms are left unregulated, the workers struggle to make a living.

Katie Wells, a postdoctoral fellow at Georgetown University, has studied for years how the gig economy has shaped work in cities. She explains how worker classification has impacts that ripple to other parts of society.

“The way in which the US has set up its society is around the employee-employer relationship,” Wells says. “When these companies don’t pay their fair share of taxes to local entities – for their use of roads, for hiring their workers – the city as a whole gets hurt. Misclassification is not just about the worker; it’s about the community.”

Progressive lawmakers at all levels of government have followed California’s lead in challenging the relationship between the companies and their workers and are likely to continue pushing for gig workers to get the protections afforded under existing employment law.

“I don’t think this debate is over by a long shot,” Jacobs says.