Andrew Waugh believes architecture should never not be politically and socially relevant. It is one reason why, when he opened his architecture practice straight out of university more than 20 years ago, timber was on his radar.

Even back then, the idea of slapping a solar panel on the roof or installing double glazing to mitigate climate change – or as he refers to it, “the greatest calamity ever to befall our species” – felt a little half-hearted. 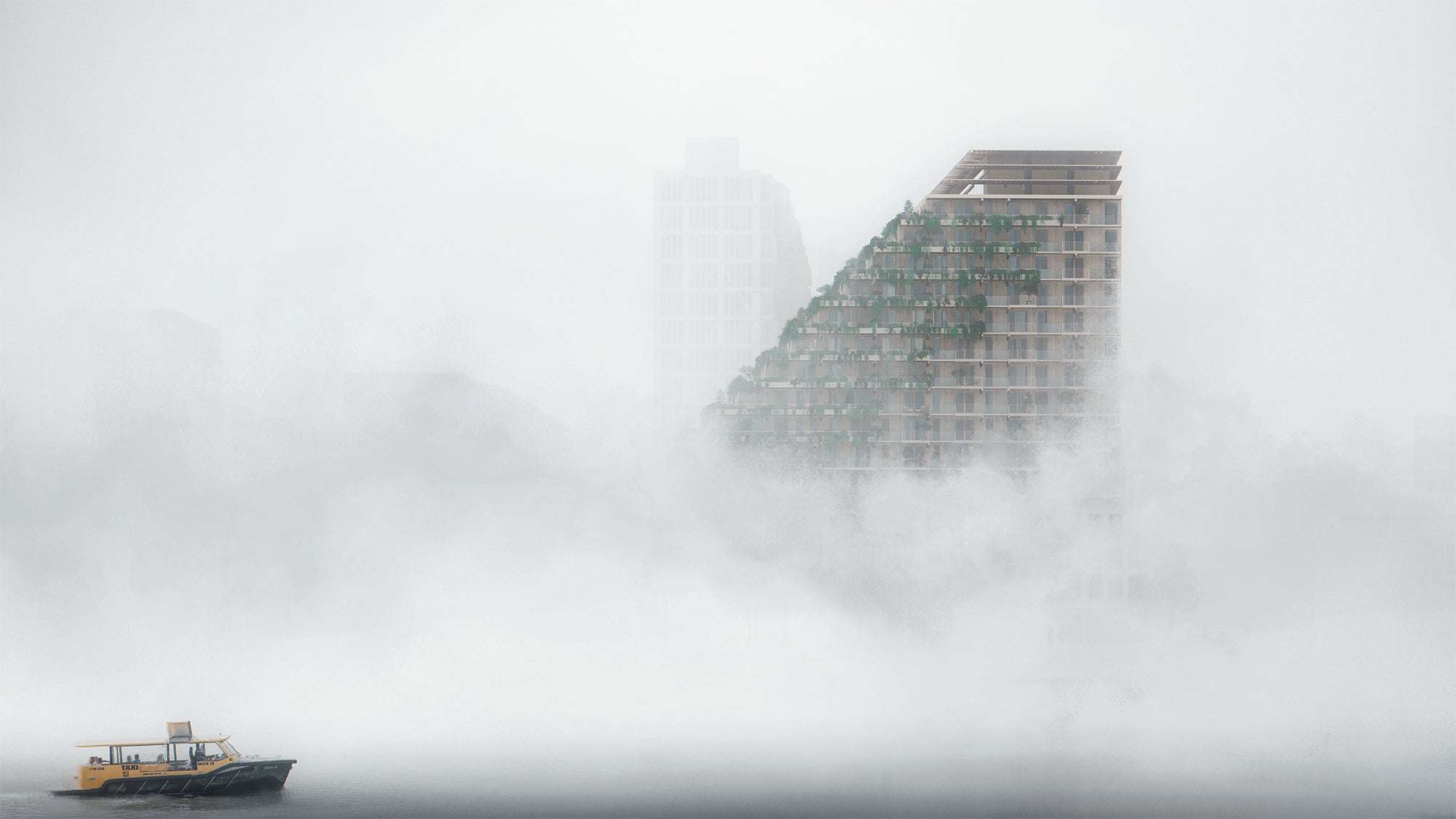 SAWA in Rotterdam, the Netherlands, by Mei Architects and Planners – a fully wooden, 50m-tall residential building. (Photo by WAX)

Taking the problem seriously meant considering the embodied carbon footprint of the materials he was using to construct a building, an approach that has come to define his practice over the past two decades.

At the same time, while he and his business partner Anthony Thistleton were setting up their business, they were both working as model makers for other practices during evenings and weekends. It got them thinking about pre-fabrication and how different elements of buildings fit together.

When they came across cross-laminated timber (CLT), a material that brought both approaches together, Waugh remembers feeling like they had apples falling on their heads.

They designed their first small CLT building in 2003 and have since built 25 across the UK and France, with another 15 or so in the design phase all over Europe, including a master plan in Norway and a half million square foot office space in Italy. Slowly but surely, other architects have followed suit.

This was driven by timber’s technical benefits (wooden buildings are lightweight and quick to erect thanks to the potential for off-site prefabrication), environmental benefits (harvested timber is a replenishable material that absorbs and sequesters carbon dioxide over time) and consumer demand (there have never been more studies focused on the emotional benefits of living in more natural environments).

In France, any new public construction project financed by the state must contain at least 50% wood or other organic materials. In Germany, firm Mad Arkitekter has been commissioned to design the country’s tallest wooden tower, while Mei Architects and Planners recently designed a fully wooden, 50m-tall residential building in the Netherlands, named SAWA.

Even that formidable accomplishment pales in comparison to the current reigning global champion: Voll Arkitekter’s Mjøstårnet building, which rises some 85.4m.

Timber experimentation isn’t confined to the continent either. Previously the title of the world’s tallest timber structure was held by the 53m-high Brock Commons Tallwood House in Vancouver, a hybrid wood and concrete structure.

A leading manufacturer of CLT, New Zealand has ambitious plans for wooden highrises, integrating them into its green agenda. Tokyo, meanwhile, will see a 70-storey block made from 90% wood rise to completion in 2041.

One of Waugh Thistleton’s most high-profile recent timber projects was a flexible working space for British Land on 6 Orsman Road, London, a hybrid CLT and steel building that can be adapted to the needs of its tenants and demounted at the end of its life.

The architect prides himself on only using timber that has been certified by the Programme for the Endorsement of Forest Certification (PEFC) or the Forest Stewardship Council (FSC), which means the forests it comes from are managed to the highest possible standards, taking into account everything from the rights of indigenous communities to the conservation of rare animal and bird species.

Anand Punja, the FSC’s regional director for Europe, says the body is actively promoting the benefits of working with timber – and specifically FSC-certified timber – to the architecture and construction communities and has been pleased to see interest growing.

“A lot of FSC wood or fibre currently goes into pulp or paper value chains and we’re trying to change that a little to get higher-value products out of the forests,” he explains.

“If the timber coming out of these forests get valued highly, that forest is valued for being a standing forest. It’s not going to get torn down to make way for a palm oil plantation. Our goal is to figure out where the bottlenecks are – whether it’s in supply or demand – in getting FSC wood from an FSC forest to an FSC building site.”

Because of the way it was put together with CLT and a lightweight steel frame, 6 Orsman Road can be adapted over time and disassembled at the end of its life.

“You can get a saw and a screwdriver out and fit stuff to it or cut stuff away from it,” Waugh explains. In fact, halfway through the construction process, the decision was made to change the concept from a regular office building to a co-working space. 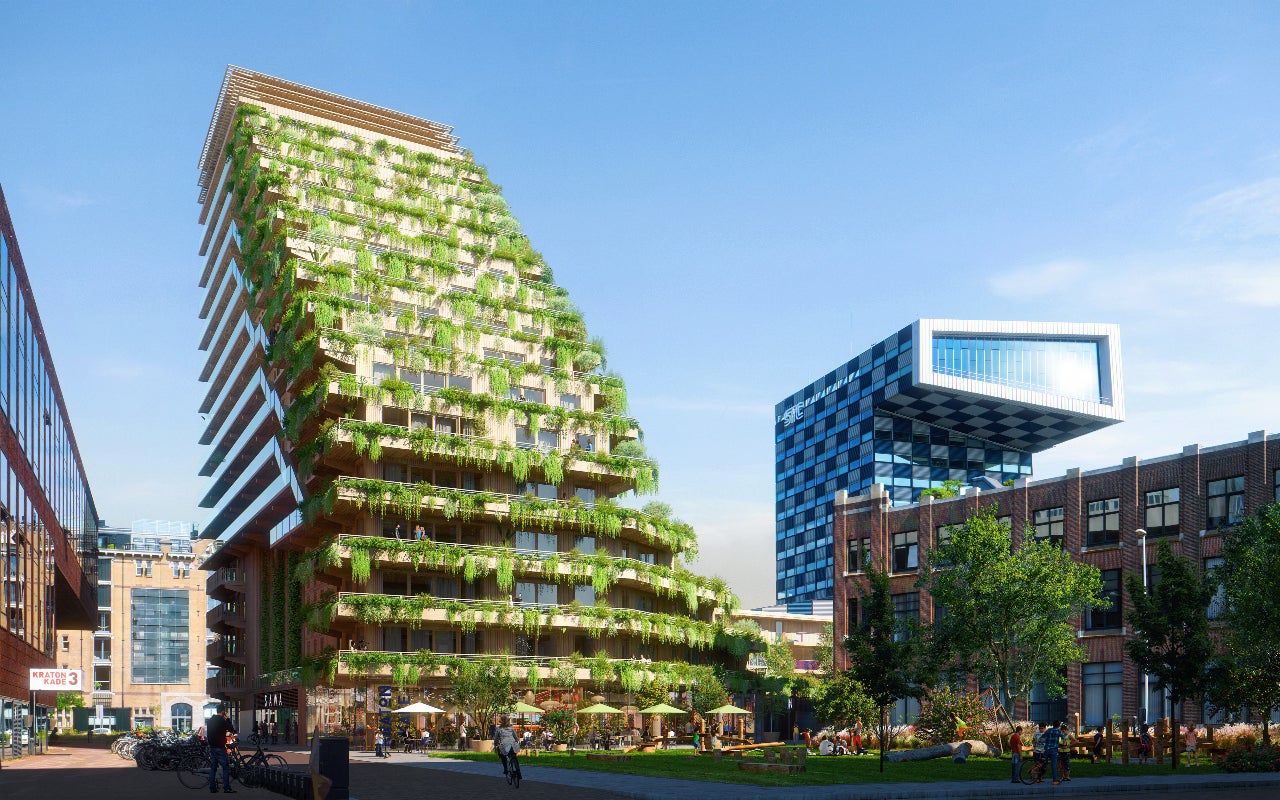 A closer look at the SAWA building by Mei Architects. (Photo by WAX)

“We got out our chainsaw, cut a big hole in a slab across seven storeys and then used that floor slab to build a new staircase,” Waugh says. “Designing for long-term flexibility is wonderful. You can start thinking about making demands of our buildings to be used and adapted many decades into the future.”

It’s an approach of which Robert Winkel, the founder of Mei Architects and Planners, approves. He is the designer and developer of SAWA, which will be the first fully wooden residential building in Rotterdam. Construction is slated to start in 2021 and, when completed, it will also have the potential to be dismantled.

Designing for long-term flexibility is wonderful. You can start thinking about making demands of our buildings to be used and adapted many decades into the future. Andrew Waugh, Waugh Thistleton Architects

Where most architects would include a concrete layer under the wooden floor for pipes and electricity ducts, Winkel plans to use a layer of dry ballast. “After 100 years, you can take these pebbles or small stones out, take the pipes out and then you have the raw material – the wood – left over as a pure product,” he explains.

For Winkel, timber is just one part of the equation he’s working to solve: how to design buildings that address today’s societal and environmental problems. SAWA will also be home to 1km of planters, abundant communal spaces where building inhabitants can plant vegetables, shared e-bikes, cars and scooters and a cross-ventilation system fed with fresh air from outside. In addition, 50 of its 109 apartments will be affordable for renters.

Waugh believes that the coronavirus pandemic has the potential to trigger a paradigm shift in building design like the 1918 flu did just over 100 years ago. “We came out of that pandemic saved by science, cleanliness, modernity and expertise, and fundamentally our architecture was transformed within a generation,” he says.

“I think the pandemic we’re going through now will bring similar results in terms of a yearning for natural materials, fresh air and health and well-being benefits. The paradigm shift we need in architecture is about rethinking what we’re looking for in buildings and it’s going to be simple values like materiality, space and light.”

While timber use in architecture is no doubt increasing, there are two main barriers, according to Waugh: perception and profit. “You have a risk-averse system where a lot of people make a lot of money and don’t really want to change, thank you very much,” he says. “They can get people to work on construction sites with jackhammers, cement mixers and grinders, pay them little money and charge a lot for it.”

Things have to be changed at government level, but what really needs to happen is the consumer has to ask for this and say ‘we don’t want concrete buildings anymore. Robert Winkel, founder of Mei Architects and Planners

The good news, Waugh says, is that demand is increasing, not from architects, engineers or governments, but from investors. In 2021, most of his practice’s new projects came directly through investors who wanted visibly sustainable results for their investments.

“Whereas developers and contractors have their own way of doing things, investors are saying, ‘this matters to our shareholders’,” he says. “In the commercial market things are changing a bit and office users are saying, ‘the space we inhabit needs to be representative of the ethos of our company’ and that needs to be driven by sustainability.”

Punja has seen a similar push. “Investors are greening their investments and passing that pressure onto developers. Developers are also interested because consumers are asking them these questions,” he says.

“Having an FSC plaque on your building might not add an extra 10–15% to the price of a flat, but it does make them more attractive to buyers and renters, and allows them to tell their sustainability story in a bit more of a fun way.”

It may be early days, and there may be a little bit of wishful thinking in Waugh’s final comment. But he believes now is the time for architects to demonstrate real social agency. “For the first time in a long time, we can demonstrate how useful we are as a profession,” he concludes.

Just as doubters ridiculed the construction of the Ingalls Building in Cincinnati, Ohio in 1903, cynicism over timber structures and their structural solidity remain. But travel to East 4th Street and Vine Street in the Cincinnati business district and gaze upwards, and the world’s first concrete skyscraper looms back at you, still capable of weathering storms and the inevitable passing of time.

Topics in this article: Architecture and design

Elly Earls is a freelance journalist based in Portugal.
Websites in our network