The real estate sector has one of the highest carbon footprints of any sector. According to the UN Environmental Programme, it produces around 30% of the world’s annual greenhouse gas (GHG) emissions and, on top of that, consumes getting on for 40% of the world’s energy. 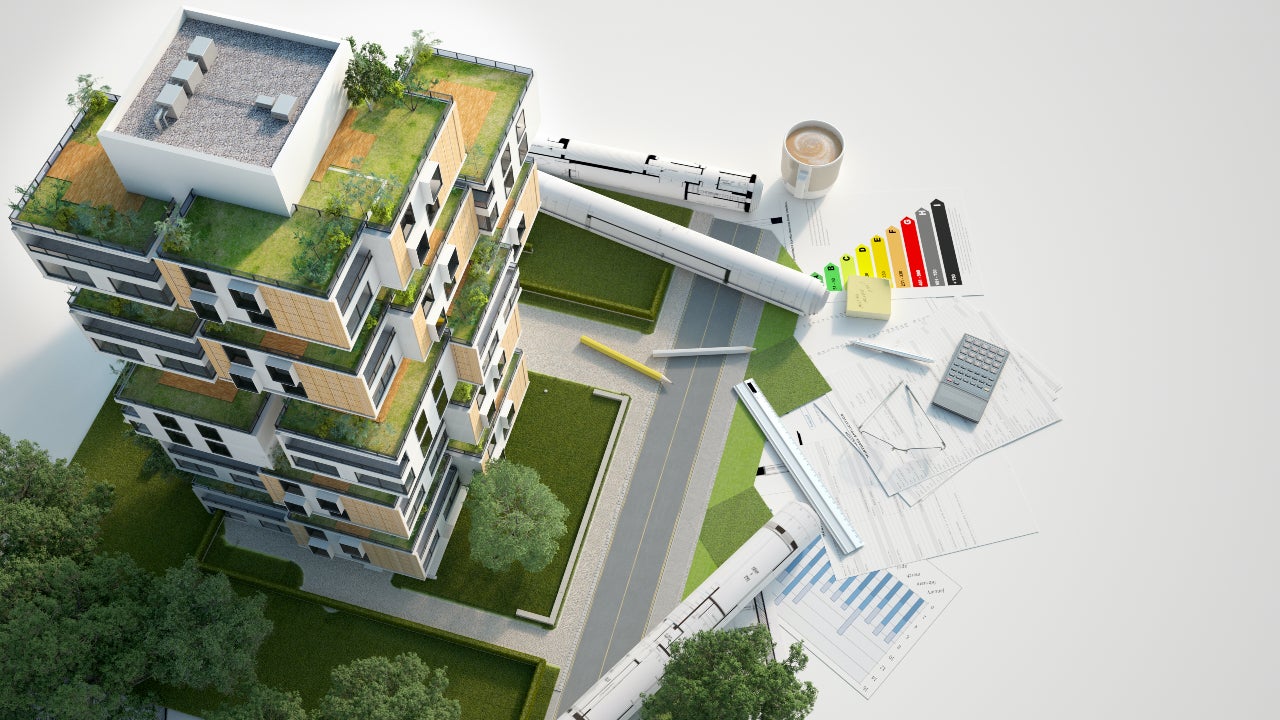 Energy-efficient buildings aim for streamlined air conditioning or elements of green space incorporated within the design or retrofit. (Rendering by Franck Boston/Shutterstock)

As such, real estate developers and managers are under pressure to make their businesses more sustainable – and some are way ahead of the curve on this front.

In a first for the property sector, French real estate investment trust Gecina – which manages €19.7bn of office assets – last month converted all of its outstanding debt into green bonds (see table below). As a result, 82% of the company’s €10bn ($12.2bn) in financing now incorporates a corporate social responsibility (CSR) component.

Most of Gecina’s loans are also now green, and in the same week that the firm converted its bonds it signed two amendments to transform €475m of bank borrowings with HSBC into responsible lines.

The restructuring of €5.6bn ($6.8bn) of debt, carried out by French bank Crédit Agricole and law firm Allen & Overy, did not lead to cheaper funding, as issuing green debt often does. There was no repricing of the bonds and they maintain the same coupons as they did at issuance. The only change has been the use of proceeds under the company’s green bond framework.

It would have been too complicated to change the coupon; we just wanted to focus on the use of proceeds.  Nicolas Dutreuil, Gecina

“It’s a question of responsibility,” Nicolas Dutreuil, Gecina’s deputy chief executive in charge of finance, tells Capital Monitor. “It would have been too complicated to change the coupon; we just wanted to focus on the use of proceeds.

“As a company, we have to take a global approach and not have a part of the company which is green and a part which is not,” he adds.

More bluntly, he said: “A crappy asset in the middle of nowhere, which is consuming a lot of energy, you will never find a tenant for that because most of our tenants are now very sensitive to all these issues.”

One aim of the restructuring of Gecina’s bonds was to boost investor appetite for the paper, and it has certainly done that.

Gecina’s investment-grade ratings of A-/A3  from S&P and Moody’s, respectively, will also have helped its case.

Moreover, the company shows a “high sustainability performance against peers on key ESG issues”, says ISS ESG, the second-party opinion provider for the restructuring. ISS praises Gecina’s high levels of transparency and says the bonds’ use of proceeds was positive in respect of UN Sustainable Development Goals 7 (Affordable and Clean Energy), 11 (Sustainable Cities and Communities) and 13 (Climate Action).

This reflects a long-standing dedication to keeping a lid on emissions. Gecina set up its first low-carbon plan back in 2008. Between then and 2020, carbon dioxide emissions have fallen from 27.8kg/m² to 13.9kg/m² for its office assets and from 43.8kg/m² to 27.1kg/m² for its residential properties.

Gecina’s bond conversion was part of its Carbon Net 0 Plan to be carbon-neutral by 2030.

“We have to continue to improve the efficiency of our portfolio,” Dutreuil says. “It didn’t make sense to wait years to refinance in green.” The longest maturity in the company’s portfolio – which incorporates €19.7bn of assets, 80% of which are in office property – goes out to 2034, he points out.

The company had considered reimbursing all of the bonds and then re-issuing them as green debt, Dutreuil says, but it was just an easier process to ask for consent for green bonds. “It is much more efficient to continue to work with the existing bonds, and it was a good way to check there was an appetite for this green approach,” he says.

Appetite there most certainly was: 92% of the bondholders agreed to the green conversion plan.

In an emailed response to Capital Monitor, Mathieu Gonin, head of euro private corporate debt for France at Aviva Investors, says he welcomes Gecina’s new green financing programme and its “ambition and engagement”.

Stéphane Villemain, head of corporate social responsibility at Ivanhoé Cambridge, the real estate investment arm of Canadian retirement fund CDPQ, says he supports the company’s “efforts in the field of CSR and sustainable finance”. Ivanhoé holds a 15.4% stake in Gecina.

As for the 8% to vote against the change, Dutreuil says they objected to the change in use of the bond proceeds. While they recognised the need for carbon-efficient new buildings, he adds, they had concerns about the restructuring of existing assets.

All proceeds will be used to improve the group’s assets rather than construct any new buildings.

How easy it is to retrofit a building to make it more energy-efficient depends on its structure, says Olivia O’Brien, a sustainability and ESG strategy consultant at London-based environmental consultancy Longevity Partners. Doing so will be harder if the assets are in the centre of a European city, such as Paris – as is the case for most of Gecina’s property.

Dutreuil acknowledges the challenge. While the company may not be able to alter a building’s facade, it can make internal changes. He cites the installation of more efficient heating and lighting in a building as well as slimline and efficient air-conditioning units.

“Today you can decrease the size of these systems [which are located on roofs] by half or a third and even have a terrace with grass and flowers on the roof instead,” he says.

Such challenges are not deterring Gecina from its green path. The next issue may be a sustainability-linked bond, Dutreuil says. Such a transaction will be a step up in terms of criteria because it will have to meet key performance indicators.

“I don’t know if it will be for the next issuance or maybe the one after, but it will be the next step,” he confirms.

This is not so much because of the cost savings it can make from green issuance – Dutreuil thinks the sustainability aspect is already partly reflected in the spread – but rather because investors are analysing what Gecina is financing in more detail.

“Ahead of the game”

Gecina’s forward-thinking approach has won it praise from various quarters. In light of the push from the European Union encouraging companies to become greener, Longevity’s O’Brien says “it is definitely better to get ahead of the game”.

Moreover, analysts at Franco-German financial services group Oddo Securities last month described Gecina as one of the “best-in-class players”. Based on social utility and low-carbon criteria, they said the company was positioned ahead of rivals such as Klépierre, another French real estate investment trust and Europe’s second-biggest publicly traded mall operator, and Paris-based commercial real estate company Unibail-Rodamco-Westfield.

And appetite for such assets is only set to rise.

Fund managers are increasingly paying attention to sustainable real estate. Since 2019 some $33bn has been raised by ESG property funds in Europe and there has been growing interest from infrastructure impact funds run by the likes of CBRE and Franklin Templeton, says Marcus Roberts, head of operational capital markets for Europe at UK real estate broker Savills.

In five years’ time, a building with green credentials “should be far more attractive in the marketplace than something that doesn’t meet those requirements”, he adds.

Gecina’s strategy seems a no-brainer in this environment.