A strange phenomenon is taking place in UK playgrounds: the swings are disappearing. Playgrounds are open during lockdown, so kids are still running and jumping and sliding and see-sawing like it’s going out of fashion – but in many, there are no swings.

The situation is the same in places up and down the UK: at the Viking Ship adventure playground in Cliftonville, Margate – which sits in the bottom 10% of ‘most deprived areas’ of the country – the metal frame is there, but the seats and chains of the swings have been removed. It’s the same in the Hyde Park playground in Westminster, London, where arguably the UK’s richest kids play: there, the wooden A-frame looms, skeleton-like, over the tarmac, but the swings themselves have vanished. What is happening? The pandemic provides part of the answer. While playgrounds were closed during the first of three lockdowns in the UK, recent research has indicated the transmission risk is low there, so the government has decreed they should be kept open.

But for local authorities, that’s a tough ask: complaints from observers and a maintenance backlog mean some have given up altogether and closed playgrounds against government advice. There may be a long-term effect: repeated lockdowns have exacerbated a situation in which kids’ play areas were becoming an afterthought for local authorities, and UK cities already struggle with providing equal access to green spaces. And with public budgets about to become more squeezed, the future for swing sets does not look bright.

“In case nobody’s pointed this out, in terms of equipment, swings are way more popular than anything else,” says Tim Gill, author of Urban Playground: How Child-Friendly Planning and Design Can Save Cities. “Always have been, always will be.”

Their popularity could be the very reason swings are disappearing, says Gill. Local authorities are faced with a dilemma: on one hand, successive lockdowns have hit kids’ mental health hard, with a report by the NHS and the UK’s statistics authority indicating one in six children had a probable mental health disorder last year, up from one in nine three years previously – and outdoor play is seen as a way to combat that. On the other, local residents are complaining to councils that parents may be using playgrounds as an excuse for under-the-radar socialising while their kids exercise.

“Members of the public have noticed that kids are still playing in playgrounds and adults are congregating around playgrounds, so they then have complained to local authorities,” says Mark Hardy, head of the Association of Play Industries (API), which represents 85% of the UK’s play sector. One poll on the TV show Loose Women in January showed 75% of the public wanted playgrounds to be closed.

An easy solution for councils may be to remove the most popular piece of equipment on the playground to control the number of people there. Taking away swings cuts a whole group of parents – of kids who aren’t old enough to use anything but a swing – out of the equation. It also cuts down on the number of people lingering, and potentially socialising, around swing sets as they push their kids or wait for one to become available.

“If a council does… feel the need to stop people from coming to a place – reduce the numbers – the quickest and easiest way to do that is to disable the swings,” says Gill. “It’s a device, I guess, for a certain end to be achieved.”

Other councils have opted to close their playgrounds altogether. In mid-January, Harlow, just north of London, chose to close all its playgrounds because of the area’s “current high infection rates… and the demand on local NHS services”.

“Social distancing is difficult to maintain within playgrounds, especially when large numbers of families are using them,” Harlow council’s chief executive, Brian Keane, said in a statement. It began the phased reopening of the playgrounds in mid-February. 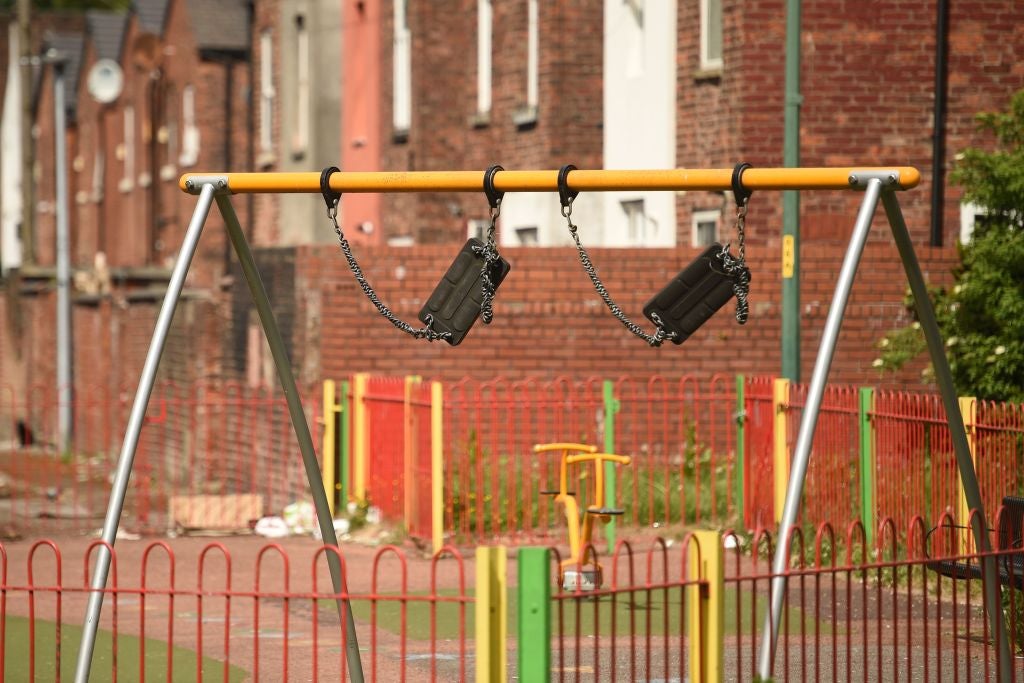 Seats of a swing set are seen tied up to prevent use in a playground in Manchester. (Photo by Oli Scarff/AFP via Getty Images)

Pandemic-related budgetary constraints are not helping. The local authority behind the Viking Ship playground, mentioned at the beginning of this article, said the swings had been removed “for maintenance”. The Royal Borough of Kensington and Chelsea, in which some of the UK’s wealthiest kids play, reported the same for a set of swings that was removed from one of its playgrounds, though they’ve since been returned.

In terms of equipment, swings are way more popular than anything else. Tim Gill

During lockdown, many councils furloughed maintenance staff and closed playgrounds. When playgrounds were allowed to reopen, “the equipment hadn’t been maintained in four months”, he says. Swings, in particular, are “dynamic” – they move, which means they need to be maintained more frequently. “And so the swing seats, etcetera, may have been removed and they were going to replace them,” Hardy says. “But guess what? They haven’t got around to it or they didn’t have the budget to do it.”

“You don’t want to be the council that has a child that falls out of one that’s broken because it hasn’t been maintained,” adds Alexandra Notay, place-making and investment director at Places for People.

It doesn’t look good for the swings’ return. A study by the Institute for Fiscal Studies think tank, published in August, indicated that those maintenance staff may not be re-employed anytime soon. Councils will be left with a £2bn ($2.83bn) Covid-related shortfall in 2020–21, according to the research, despite extra funding from central government – although it also expected a £27m savings from furloughing staff. It almost goes without saying that the worst-hit in this situation will be the one in eight families in the UK who, according to the API, don’t have access to outdoor space.

One solution might be to take the onus off local authorities and shift it onto developers. In London, there is already a planning requirement forcing developers to provide 10m² of play space per kid (although, as in the case of a Henley Homes development in south London, where kids living in the social and private parts of the scheme had segregated play areas, developers have been known to play fast and loose with the requirements).

Developers are struggling, though, says Notay. New requirements from residents like increased deliveries, a major feature of the pandemic, mean those creating new urban spaces are struggling to fit in all the required elements.

“From a place-making point of view, when you’re trying to design these kinds of spaces and you’re the developer, now you’re under a massive planning obligation to make sure that a fire truck can access everything, that a refuse truck can access it – but also nowadays that deliveries can be delivered safely,” she says. “It eats into that public space. It could have been play space or it could have been a bit of rubber flooring and a swing, but actually it needs to be a turning circle for vans.”

What the mystery of the UK’s disappearing swings actually symbolises, says Gill, is the fact that the country’s local authorities haven’t historically taken children’s play seriously.

“This idea that we don’t really need to worry about kids being stuck indoors because they’ve got screens and they’re very happy on Snapchat or whatever, that’s been blown out of the water [by the pandemic],” he says.

A renewed focus on the needs of children, who have sacrificed a year of opportunity for socialising, education and development, may change that. “Maybe the pandemic will be the catalyst for a reappraisal of that as part of a wider recognition of the importance of public space, public life and social contact and all of that,” says Gill. “We shall see.”