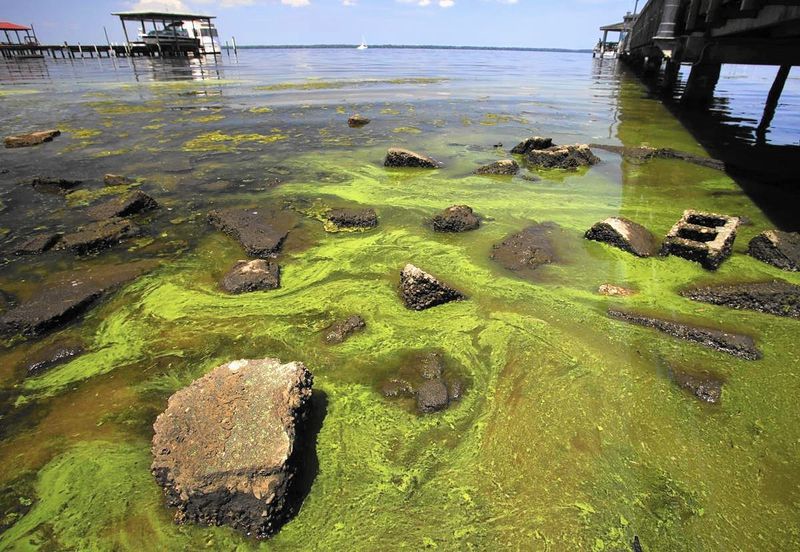 A state water credit programme is among the solutions non-profits and activists are pursuing to fight the pollution that causes algae blooms like this one in Jacksonville. (Photo by Walter Coker via St. Johns Riverkeeper)

The St. Johns River is the largest river in Florida and one of the few in the US that flows northward. It empties into the Atlantic in a quaint fishing village called Mayport in the north-eastern part of the state, but not before running through the heart of downtown Jacksonville, where tourists and residents gather on its banks for summer festivals, boat races and fishing. “It’s the largest urban community on the banks of the St. Johns,” says Lisa Rinamin, chief advocate at St. Johns Riverkeeper, an environmental non-profit dedicated to protecting the river.

But the beloved waterway has become less hospitable in recent years. Its health has declined, and it has grown prone to toxic blue-green algae blooms. The 2019 State of the River report found that such blooms in the lower St. Johns River contained dangerous nerve and liver toxins, which can cause nausea and vomiting, rashes, numbness, incoherent speech and even respiratory failure or liver damage in those who touch, swallow or inhale airborne droplets of the polluted water, posing a threat to swimmers, anglers and anyone out for a jog along the water.

A growing, statewide sewage crisis is at the core of the St. Johns River’s algae problem. Florida is the third-most-populous state in the nation, and its citizenry is increasing at a rate of almost 2.5 million people per year. Its ageing sewage system cannot keep up.

According to a company spokesperson, the Jacksonville Electric Authority (JEA) has invested “millions of dollars” in repairs and upgrades to the city’s sewage system over the past 20 years. But Rinamin says parts of her neighbourhood are still connected to clay pipes leftover from when Florida introduced sewers more than two centuries ago. With ageing pipes, sewage leaks have become commonplace. And blue-green algae feed and proliferate on nutrients common in sewage, like nitrogen and phosphorus. Other  Jacksonville neighbourhoods, many of them Black communities, are not yet connected to the central sewage collection system and rely on septic tanks, which Rinamin says leak nutrients into the surrounding soil and groundwater even when they are well maintained. As septic tanks age, leaks worsen.

“There’s no one at this point that’s focusing on a sustainable management system for our growing volume of human waste.”

The amount of excess nutrients flowing into Jacksonville has also increased since a series of environmental protections were passed to prevent sewage sludge, a semi-solid by-product of sewage treatment, from being dumped in the Everglades region in southern Florida. But while those protections are good for the endangered wetlands in the South, they have resulted in sewage sludge being trucked north and dumped in central Florida instead, where it seeps into the headwaters of the St. Johns River.

Florida lawmakers acknowledge the statewide crisis, but Rinamin says they are “playing whack-a-mole with the problem. There’s no one at this point that’s focusing on a sustainable management system for our growing volume of human waste.”

Florida Governor Ron DeSantis signed legislation this year mandating hefty fines for cities that experience sewage spills due to ill-maintained pipes. This summer, he fined Ft. Lauderdale more than $2m for a series of spills that garnered international attention for their frequency and severity. But he opted not to allow the fines to be spent on pipe repairs – a move that was criticised as punitive, politically motivated faux-environmentalism. A recent state lawsuit filed against Miami for a series of sewer breaks has drawn similar critique. 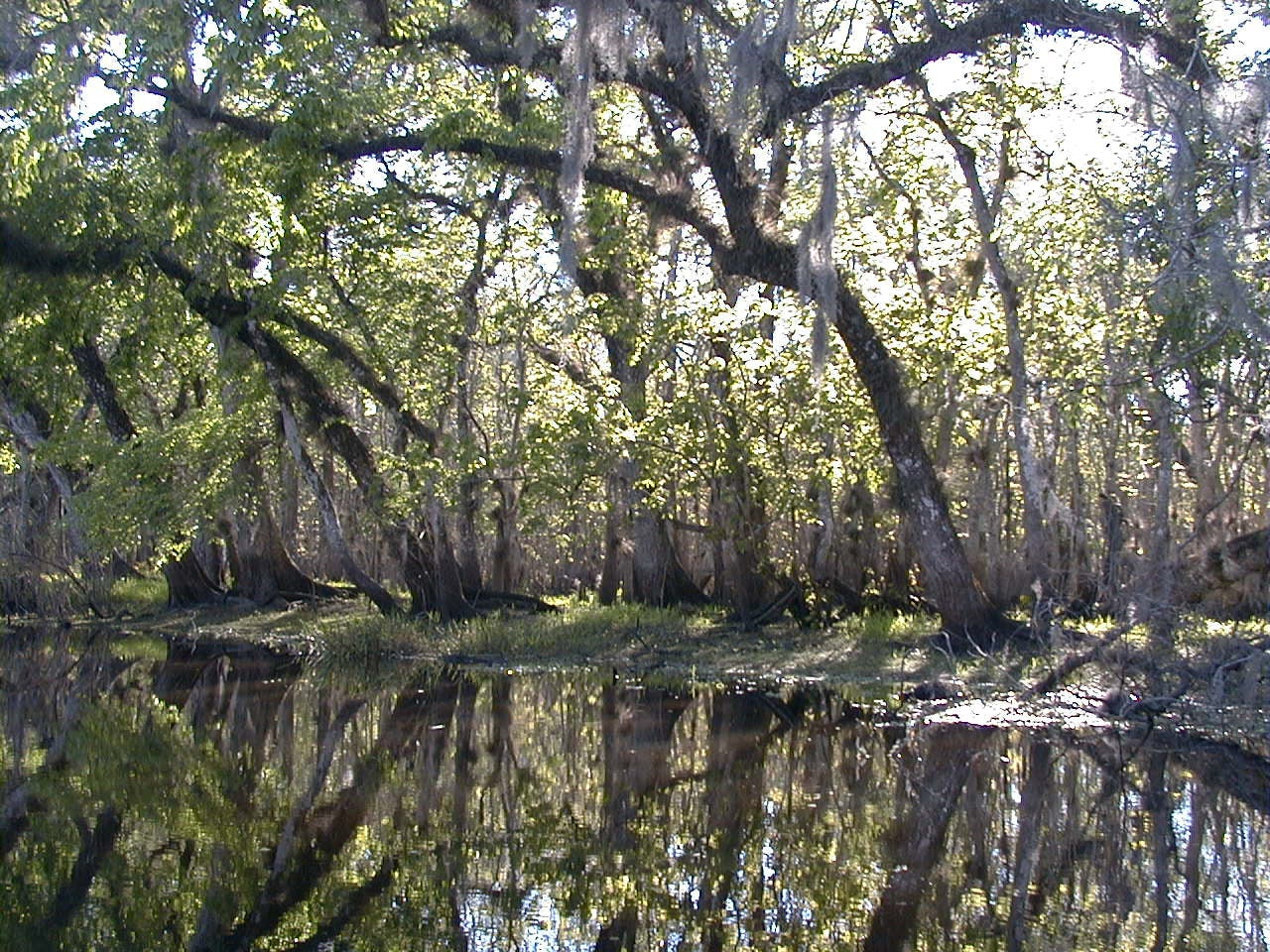 While statewide leadership flounders, a collective of environmental activists, nonprofit organisations and local politicians in Jacksonville are working together to address the city’s sewage crisis and protect their cherished waterways. The crisis and its ties to social and environmental issues have begun to show up in local politics, for example.

Nicole Hamm, a candidate for the Jacksonville City Council in the recent election, explains that the sewage crisis has hit communities of colour the hardest. “The city has not invested in proper drainage and infrastructure so that people can live and thrive [in certain parts of town],” she explains, “and those parts of town were predominantly people of colour.” Hamm campaigned on investing in climate-resilient infrastructure to help address concerns like repeated sewage spills. Her loss to conservative Kevin Carrico was a blow to local environmentalists, for whom Hamm would have been a welcome ally in the legislature. But they picked up wins elsewhere. Ashantae Green, who also ran on an environmental-equity platform, was elected to the Duval County Soil and Water Conservation District. Voters also passed an amendment to the Jacksonville charter to diversify oversight of the JEA board.

St. Johns Riverkeeper and its network of volunteers are at the centre of many ongoing efforts to protect the river from sewage spills and nutrient discharge. “Our approach to these issues is, we need to stop pollution at its source, but we also need to restore the river’s natural ability to filter out pollution,” explains Rinamin. The organisation’s approach manifests in research, education, advocacy, public-awareness campaigns, cleanup events and other restoration works along the St. Johns River.

The non-profit also partners with other groups focused on cleaning and protecting Jacksonville’s smaller waterways, like Groundwork Jacksonville, whose ambitious restoration projects on Hogans and McCoys creeks have improved water quality and flood control, restored habitat and earned praise for its community-oriented, sustainable approach. Groundwork’s efforts on urban-creek restoration are part of a larger project to wrap downtown Jacksonville into a series of public green spaces.

Kay Ehas, CEO of Groundwork, told J Magazine that the cumulative impact of its ongoing projects on both the environment and local communities will be “bigger than any single development… ever”. When finished, Groundwork’s project will bring together 30 miles of trails, greenways and parks, and link more than a dozen neighbourhoods to Hogans and McCoys creeks. Groundwork’s community engagement includes stream cleanups and training about environmental concerns in an effort meant to ensure the continued protection of the local waterways.

“The sewage issue is multifaceted,” says Rinamin. “We need to make sure that not only are we protecting our communities and city infrastructure… but also protecting and fortifying the St. Johns River and its tributaries and supporting efforts to come up with a holistic plan for septic tank phaseout.” In Jacksonville, community members have responded to the need to attack the sewage crisis on all fronts with sweeping efforts from which other cities can surely learn.

Marianne Dhenin is a writer and researcher based in Cairo.