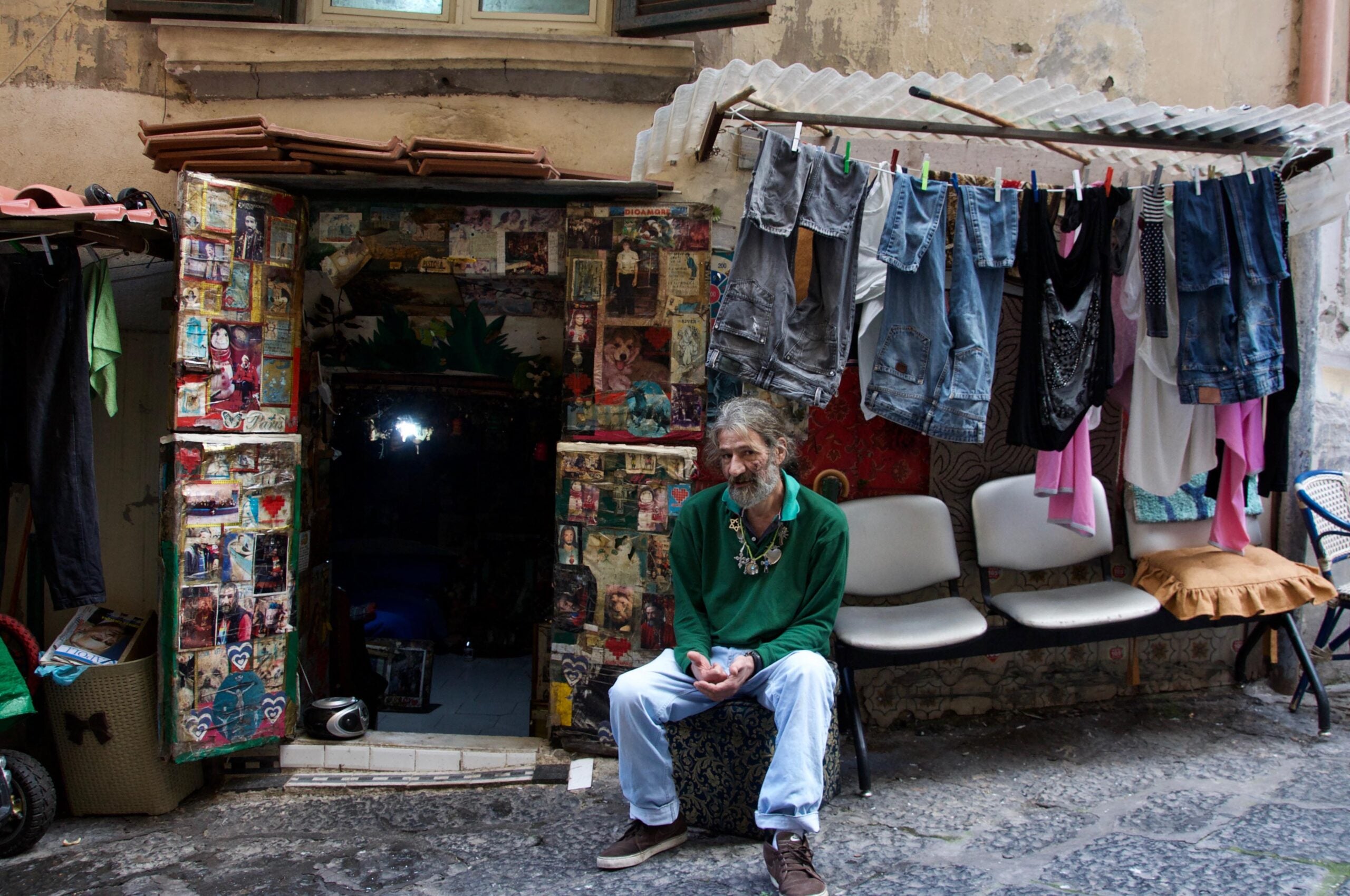 Salvatore Prudele sits outside his basso, which is across the street from his mother’s, in Naples’ Spanish Quarter. It is not uncommon for large families to have more than one basso in the same neighbourhood. (Photo by Savin Massimo Mattozzi)

Walking though any of Naples’ historic neighbourhoods, one might lock eyes with someone just getting out of the shower, cooking or watching TV. These people live in small, street-level housing called bassi (or vasci in Neapolitan), where the line between what is public space and what is private is not always clear.

There are an estimated 40,000 of these tiny apartments in Naples, which are usually packed with numerous family members in only one or two rooms. To relieve some of the claustrophobia that comes with living in a basso, home life often spills outside. 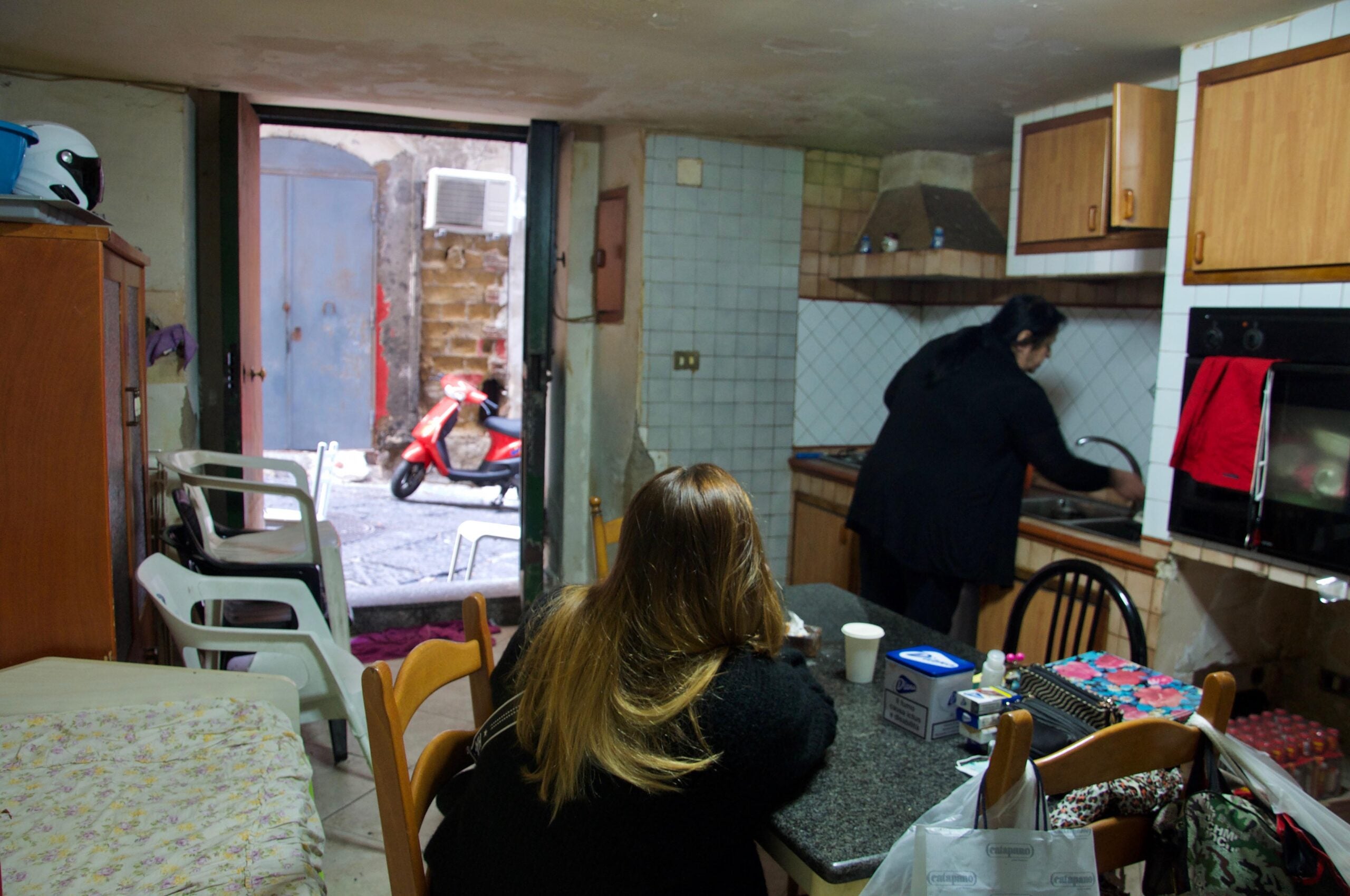 Anna Tucci, right, prepares some coffee for her friend Titta Sereno in her basso in the Montecalvario section of the Spanish Quarters neighbourhood. (Photo by Savin Massimo Mattozzi)

These cramped living spaces arose in medieval times during urban expansion and were generally inhabited by people on the margins of society and the city’s poor. According to Marina Brancato, an anthropology professor at the University of Naples “L’Orientale”, the types of people who live in these apartments haven’t changed much since they first appeared hundreds of years ago. 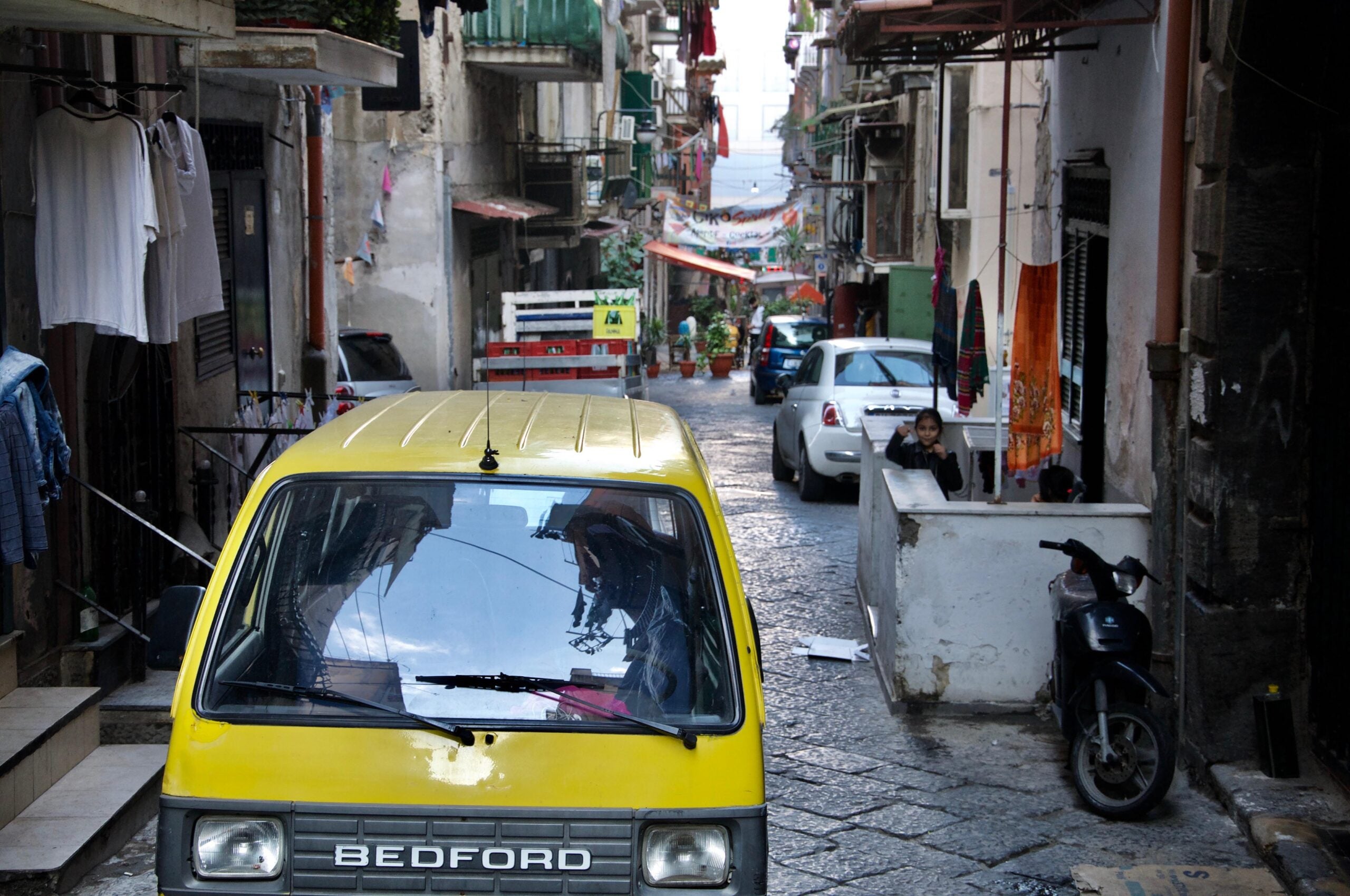 Children play inside a walled-off space outside of a basso. Some families build small walls around their entrance to have a bit of privacy, but they are usually built without permission of the city, shrinking the already tight, historic streets. (Photo by Savin Massimo Mattozzi)

“The only thing that has changed,” Brancato explains, “is the origin of some of the people that live in bassi.” While the majority of people dwelling in this housing type continue to be poor and working-class Neapolitans who have lived in there for generations, there is an increasing population of immigrants, mostly from Sri Lanka, Bangladesh and Central Africa. 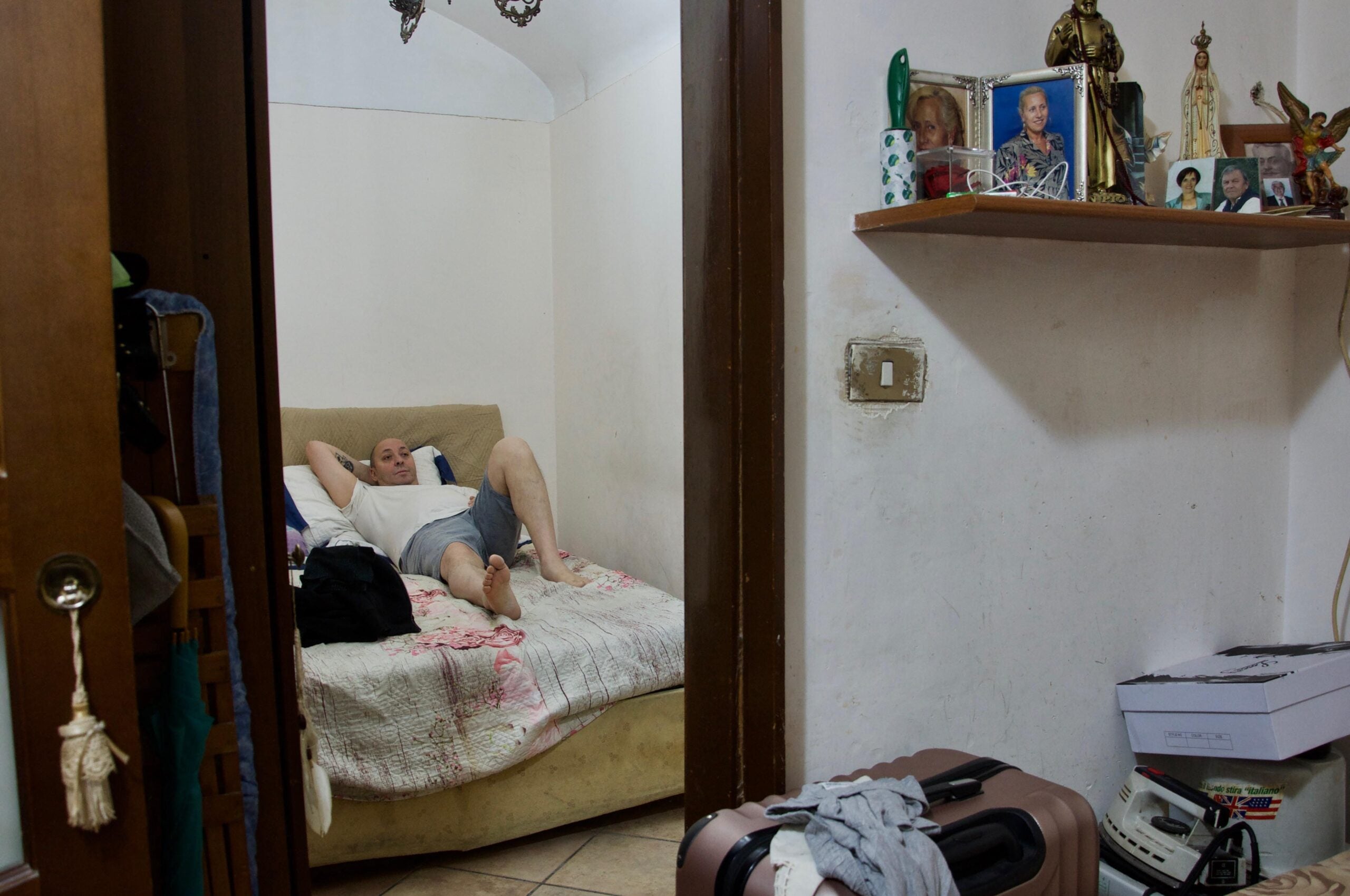 Alberto Albinni takes advantage of a rare moment of solitude to watch some TV in his family’s basso. He shares his 50m² apartment with between five and eight other family members, depending on the day. (Photo by Savin Massimo Mattozzi)

Alberto Albinni shares his 50m² basso with between five and eight family members in Naples’ Spanish Quarters neighbourhood. His family, like most living in bassi, strives to adapt to the challenges that come with living in one. High humidity and a lack of ventilation often cause black mould to grow on the walls of these apartments. Albinni tries to cover it with tile, but it keeps growing, making it difficult for his family members with asthma and allergies to breathe.

The coronavirus pandemic has amplified not only structural problems with these apartments but also issues of personal space in such cramped areas. In Albinni’s apartment, the members of the family do their best to make tiny spaces for themselves, even if it is just a corner of a table. 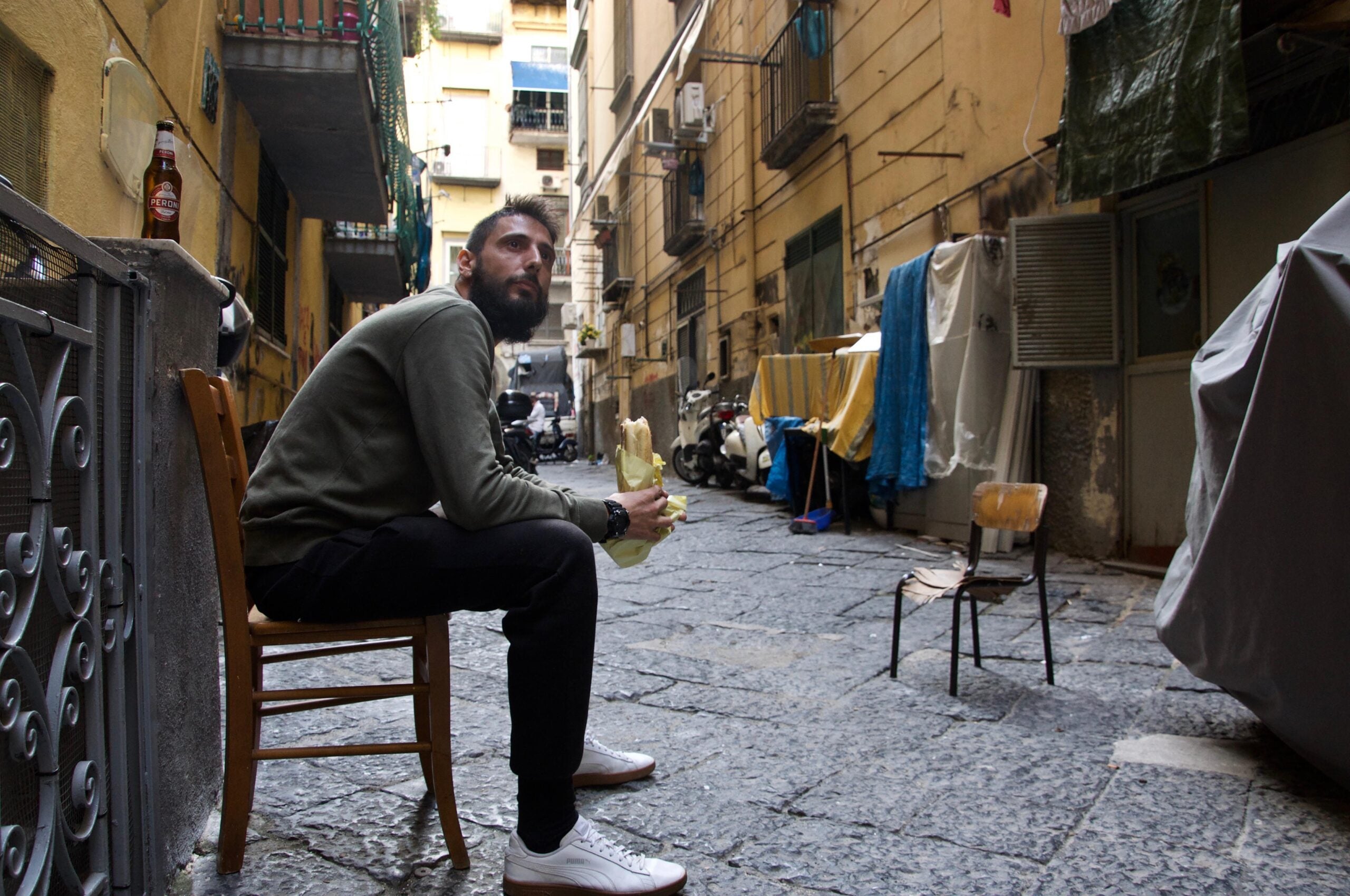 Luigi Bavaro sits outside his mother’s basso and eats a sandwich in the Montecalvario section of the Spanish Quarters neighbourhood. (Photo by Savin Massimo Mattozzi)

One of the ways people use this inventiveness is to create extra living space outside. This, in turn, transforms the streets of historic neighbourhoods into a series of living rooms among buzzing mopeds and tiny trucks. The exchange between public and private spaces creates a living situation that is unique to the areas where bassi are present in Southern Italy.

“There is an extension of the street inside the basso,” says Brancato. “There is obviously a relationship with your own domestic space but also with the urban space, with the street, with the neighbourhood… it’s as if you are sharing [your life] with the public.” 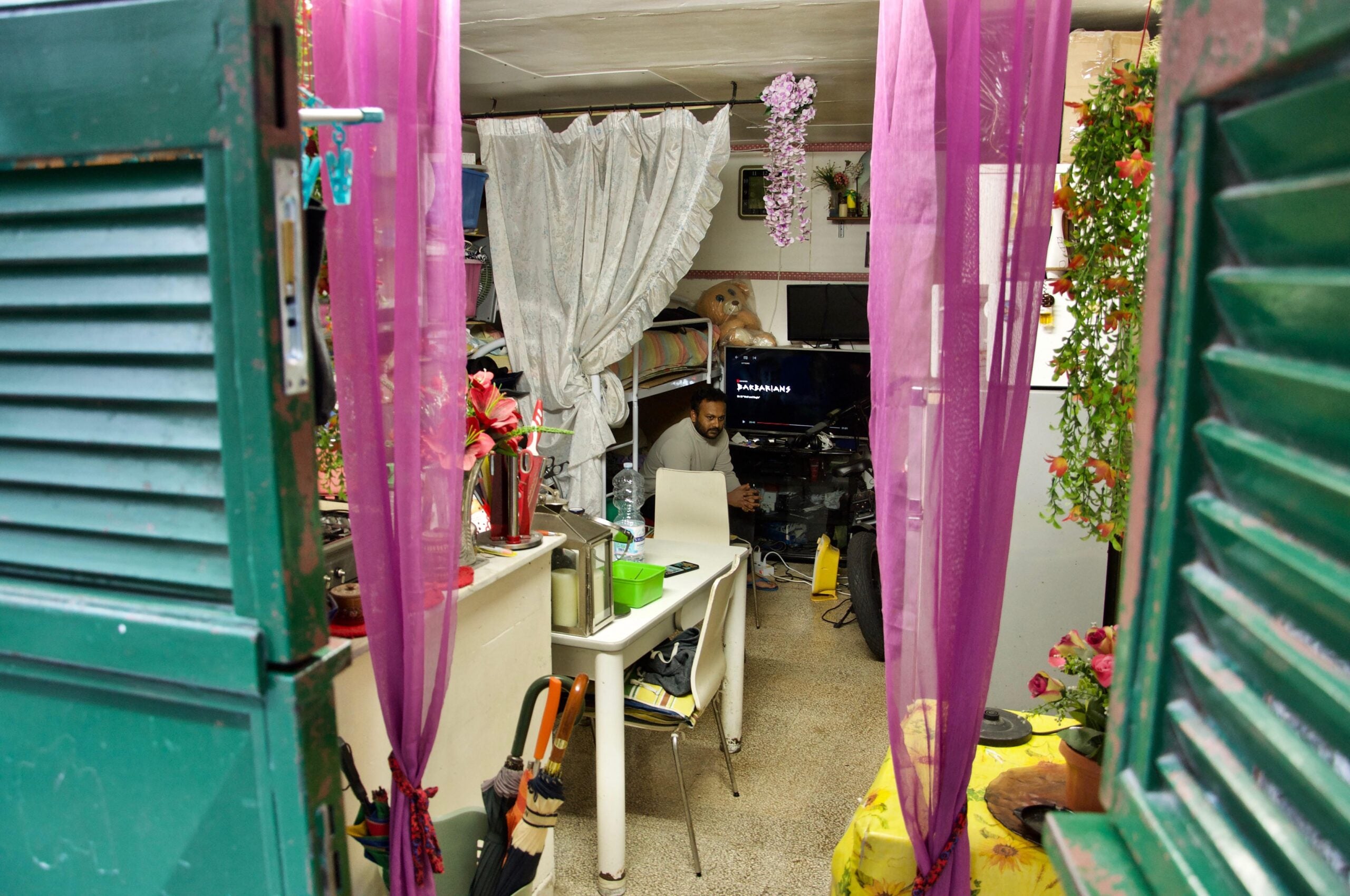 Brinoy Fernando, a house cleaner originally from Sri Lanka, lives in the Montecalvario section of the Spanish Quarter. For him, adjusting to having his life so visible and open to the public took some time. “People just look in the window,” he says, leaning over the only window in his apartment. “There is no privacy, but over time you get used to it, just like anything else.”

Savin Massimo Mattozzi is a freelance journalist based in Naples.