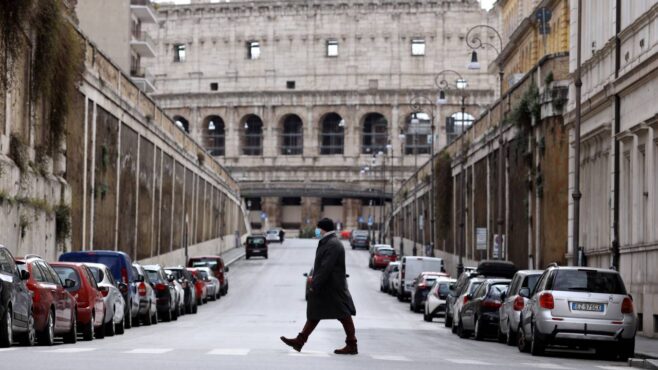 People in Rome sent about 90% fewer requests for walking directions than they did before the Covid-19 quarantine began, according to Apple. (Photo by Alessia Pierdomenico/Shutterstock)

Coronavirus lockdowns led to a remarkable drop in movement around the world, but how much have people stopped moving around their cities?

Among Europe’s major capital cities, Rome and Paris saw the biggest decreases in pedestrian activity in Apple Maps after authorities asked people to stay home, according to a City Monitor analysis.

Apple’s data offers one look at how movement patterns have evolved over time in response to Covid-19. Because the virus has spread at different rates across the globe, cities were affected – and imposed lockdowns – at different times.

To provide a fair comparison between them, we looked at pedestrian activity starting with the first day of lockdown in each city. We also decided to only look at walking, since data on public transit mobility is not consistently available in all locations.

For a baseline, we used an average of pedestrian activity in the two weeks before quarantine was imposed.

Dublin and Amsterdam are both down by an average of 75%. London’s decrease is more akin to Los Angeles (down 52%) and Sydney (down 49%) than many other European capitals.

Here’s a table ranking major world capitals – where data is available – from the highest to the lowest average drop in pedestrian activity since lockdowns began locally:

This comparison is not meant to show whether some cities are better at following orders than others. After all, drops in mobility will be affected by how widespread Covid-19 is, the size of the city, the levels of mobility before lockdown, different lockdown rules and even what kind of jobs people do there. Because this data reflects requests for walking directions, it may also reveal more about walking behavior for certain kinds of trips – to unfamiliar places, for example – than it does about walking for recreation or for more routine, familiar destinations.

For example, there are 16 defined reasons one might be allowed to leave their house in Sydney, including going to school or attending a wedding. In Los Angeles, people are allowed to go out only for essential travel, to get food and health supplies or to look after family and friends.

What the data does show is the sheer extent to which major cities – which rely on free movement to function – have been frozen by virus-related lockdowns.