Cities across Europe are taking on one of the biggest carbon emitters and air polluters: the motor car. Car-free days, car-free streets, and restrictions on diesel cars are staples in an increasing number of cities championing “people first” policies. Oslo is leading the charge and practically car free already, while Paris’ mayor has announced ambitions to make Paris a  ‘15 minute city’, in which everything you need within a 15-minute walk or bike ride.

Here in the UK, cities are at it too, from Edinburgh’s monthly car-free day, to London’s plans to close half its streets to cars, to Brighton, Bristol and York announcing car free ambitions this week. The biggest news, however, comes out of Birmingham – hitherto known as Britain’s ‘motor city’ – whose plans to get people onto bikes and buses goes out to consultation this month.

The city’s plans were inspired by the Belgium city of Ghent, whose zone-centred traffic plan was introduced overnight in 2017 and has been a roaring success. With fewer cars on the roads and cycling booming, air quality has significantly improved, and the number of restaurant and bar startups have increased by nearly a fifth.

In Manchester, young city centre councillors are taking action and pressing for car-free measures. But has it left it too late to pioneer the UK’s people first revolution? Let’s take a closer look at Birmingham’s plans and how Manchester stacks up. 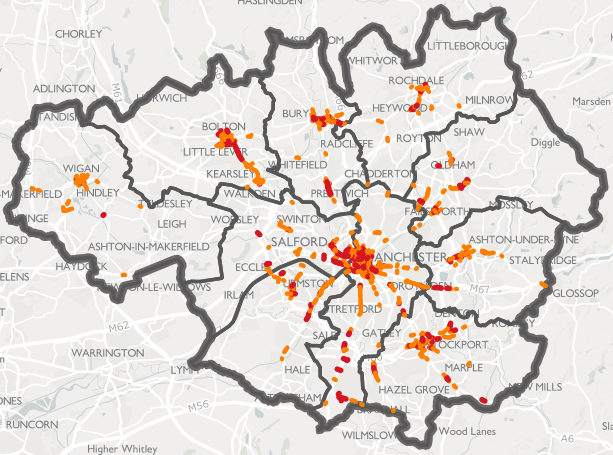 In all, 152 roads in Greater Manchester are in breach of legal air pollution limits. 1 in 23 deaths in GM is linked to air pollution, according to a new study released this week. Image: TfGM.

Why should we go car free?

Why has the tide turned against cars? Simple: cars are the biggest source of greenhouse emissions in the UK. In fact, transport is the only sector not to have cut emissions since the 1990s. That isn’t surprising considering car sales continue to rise.

Car adverts still promise us open roads, freedom, and status. They would do better to show us wasting our lives away in traffic jams while poisoning the environment and children’s lungs. Electric cars aren’t the solution because they produce particulate air pollution too, and don’t make any difference to chronic congestion.

This is the reality of cars: apart from being responsible for 20 per cent of the world’s total C02 emissions, around the world they kill 3,500 people a day (more than any other mode of transport) and result in 11,000 new cases of child asthma a day. Cars are part and parcel of the obesity crisis and linked to cardiovascular disease. And they’re an equality issue, with the poorest in society not owning a car and cut off from job opportunities inaccessible by public transport.

While countries such as the Netherlands have spent decades phasing out the need for cars, the rest of the west is finally catching up. Those cities taking swift, bold action will be tomorrow’s leaders.

In this respect, Birmingham is pulling its ahead of Manchester. The city declared a Climate Emergency a month before its rival, and is now planning to adopt Ghent’s zone-based city centre traffic model.

In this model, the city centre is divided into zones and cars can drive in and out but not across zones, while buses and bikes can. In Ghent the result was a drop in car journeys from 55 per cent to 27 per cent, and a boom in cycling. This clever model doesn’t ban cars but makes public and active transport the natural choice for short journeys, while roads become less congested for those that have no choice but to drive.

Manchester could take a leaf out of this book, as currently 1 in 3 journeys under 1km (⅗ mile) in Greater Manchester are made by car. There’s no reason most people could not easily walk or cycle this distance.

Moreover, most people don’t drive into the city centre. According to property data analyst UrbInfo, 60 per cent of Manchester’s transport infrastructure is dedicated to motorists, even though they only account for 13 per cent of journeys. Birmingham’s plans to reduce cars include reclaiming car parks for new housing. With cars taken out of the equation, we’ll have more space to live, breathe easy, and enjoy our lives. 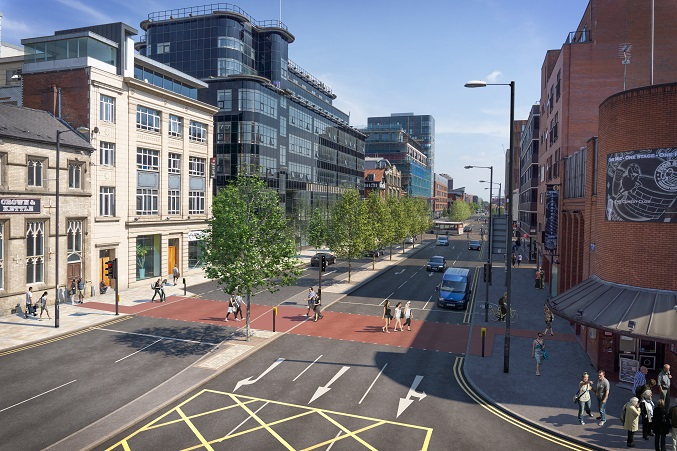 What does Manchester have planned?

Councillors recently agreed to investigate prohibiting through-traffic inside the inner ring road, a proposal introduced by city centre councillors Marcus John and Jon-Connor Lyons. This is excellent news and no surprise it’s come from two of Manchester’s youngest councillors.

The proposals also include exploring feasibility of an ultra low emissions zone, as implemented in London. The recent council meeting also saw councillors supporting no idling zones outside schools and the announcement that 21st June will be a car free day. This is all very promising, as are plans to pedestrianise Albert Square.

However, Manchester needs to act fast on Johns and Lyons’ no through-traffic proposal to catch up with Birmingham, which has already drawn up plans to prohibit through traffic and put them out to consultation.

Moreover, and amidst all this positive news, is an alarming number of multi-million pound road expansion projects currently underway across the city centre, that have faced strong public opposition and feel wholly out of step with the times. Work on Great Ancoats Street, which removes cycle lanes, has commenced. The Princess Road roundabout works expand vehicle capacity and will make it slower for pedestrians to cross. Hyde Road is another road widening scheme that doesn’t include cycle lanes, and will sever the second busiest cycle route in the city for 12 months.

The council also plans to use the former Central Retail Park as a temporary 24/7 440-space car park next to the city centre’s only primary school in an area where the level of air pollution is already classed as “lethal and illegal”. Compared to Manchester’s young councillors’ ambitions, these projects are characteristic of a Council that prioritises the private car as though it were the 1990s.

Manchester can lead the way

Manchester is in a brilliant position to pioneer a car-free city, though. Along with young, forward-thinking councillors consider the recent announcement that Northern Rail have lost their franchise, and the likely re-franchising of buses. This would bring local rail and buses under public control and the aegis of mayor Andy Burnham, the GM Combined Authority (GMCA), and Transport for Greater Manchester (TfGM), who have their finger on the pulse when it comes to the future of transport in cities.

In 2017, Burnham appointed Chris Boardman as the UK’s first cycling commissioner. Together they unveiled a proposal for Greater Manchester to become the first city region in the UK to have a fully joined up walking and cycling ‘Bee Network’ covering 1,800 miles, which could be a “national blueprint” for the UK. This would make cycling a serious mode of transport, following in the footsteps of cities like Amsterdam where 72,000 commute by bike, double the number of cars in the city.

Last year, Burnham also announced plans for a ‘London-style’ integrated transport system for the region, which also expands the network so public transport becomes a default way to travel. TfGM is anticipating Manchester’s population boom, putting itself at the heart of new housing developments so new homes are built around public and active transport and not the car. For this reason, Simon Warburon, Strategic Director of TfGM, hailed the ‘Northern Gateway’ development plans as an “urban renaissance” at a recent event. Warburton also said Manchester can expect to see money for transport coming its way.

GMCA and TfGM have the vision for an integrated public and active transport region. However, they need buy-in from all 10 Greater Manchester councils to make it reality.

While councillors like Johns and Lyons are moving the city forward, Manchester Council’s road widening schemes and slow up-take of street closures is not the stuff of world leading cities. Nor is this insight from Manchester Council Leader’s Blog last year: “Parked cars are zero emissions: they’re only a problem when they move.” Richard Leese has been leader of the council for nearly 25 years – about as long as Johns and Lyons have been alive.

Now is the time for bold leadership. Manchester’s young councillors are leading the way.