In mid-May, as Parisians took their first steps out from one of Europe’s most restrictive lockdowns, many faced the understandable fear of getting on public transport. 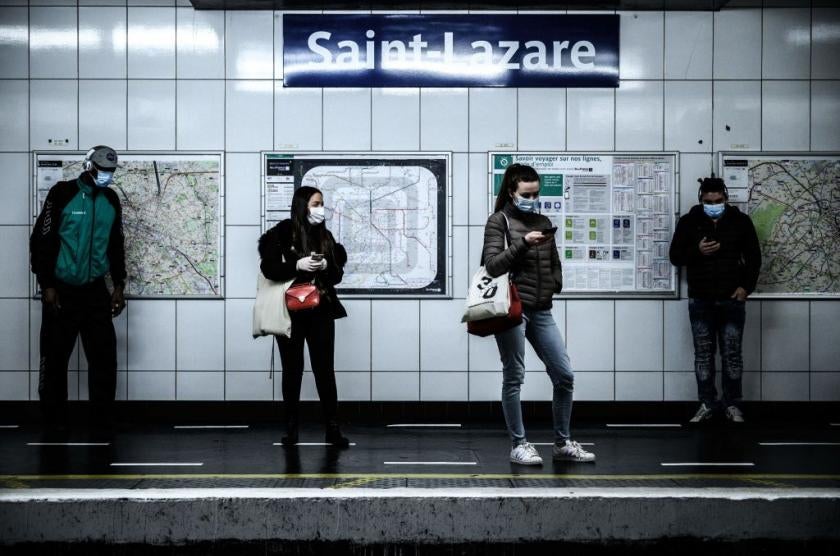 Commuters wearing masks wait for a train at the Saint-Laraze platform in Paris. (Photo by Philippe Lopez/AFP via Getty Images)

That fear exists in any city right now, and for obvious reason: Cramped, crowded and poorly ventilated spaces offer perfect conditions for the coronavirus to spread. In a city like Paris, whose metro has a reputation for being unclean, people might expect the situation to be even more dire.

But as the city emerged from one of Europe’s strictest lockdowns, residents discovered something else: a metro system that feels rather safe. In a notable departure from its status quo, the Paris metro now takes great steps to show that cleanliness is a priority, and passengers can find some comfort in seeing that public health guidance is being taken seriously.

From the start of France’s lockdown period, the three public transport operators in Paris and the surrounding Ile-de-France region announced that masks would be compulsory on all public transport, including taxis. Steep fines were put in place for noncompliance.

After spending two months in my own apartment, I was hesitant to try the metro myself, but curiosity recently won out. I donned my mask as I stepped into the underbelly of Paris and was pleasantly reassured. Staff from the RATP transit operator checked that everybody wore their masks, and I saw them reminding one person to put theirs on, which they sheepishly did.

The staff dished out hand sanitizer, and my platform had a selection of points where the few would-be passengers stood, all looking slightly ill at ease, but at safe distances. Inside the carriages, the metro was gleaming. The seats looked like they must have been shampooed for the first time in years. The floor was spotless. It was an all-around good experience, putting my worries to rest. It seems this really is doable after all.

For the transit operators, there was no hesitation to ensure that public transport was safe to use, right from the beginning of the state of emergency. The systems acknowledged that there were many frontline workers who had no choice but to use public transport. At the same time, it was nearly impossible for the general public to get a hold of masks, so the RATP began distributing masks to commuters in larger stations, while also adding new social distancing measures in the system. Stickers marked seats as off-limits. Markers on platforms and in train cars suggested places where people should stand to keep distance if things got busier.

“I was hesitant about taking the metro when it first re-opened, but was impressed with the level of cleanliness, the way people were quietly maintaining distance, and the signage that indicated seat availability,” says Mary-Louise Gifford, a Canadian expat now living in Paris. “I felt safe.”

A commuter rides a train surrounded by seats that are marked off limits to fellow passengers. (Photo by Philippe Lopez/AFP via Getty Images)

Starting in March, French citizens were restricted to their houses and only allowed outside with a completed permission slip. Exercise, walking the dog and essential trips were allowed, but only within a 1km radius from home, and regular police checks were the norm. The next step to “deconfinement” was to allow excursions around Paris and within a 100km radius from home starting 15 May, with travel allowed within France’s borders since 2 June.

Newly re-elected Paris Mayor Anne Hidalgo pledged that masks would remain obligatory on public transport and that hand sanitiser would be made widely available. Since then, dispensers have been installed at bus stops and major metro stations. Metro carriages are also disinfected once a day.

With hospitalisation rates dramatically reduced, Paris has now been declared a Green Zone, and we can travel around the city freely. Some metro stations are still closed, and some bus services reduced, but the new normal is coming into focus.

On buses, passenger boarding has been moved exclusively to the rear door, while the front area is cordoned off to protect the driver. Again, more than half of seats are off limits, and buses serve every stop by default, so passengers don’t have to push the “stop” button. (That said, on longer routes, trams and the RER suburban trains, you still have to push a button for the doors to open.)

An employee of the RATP distributes hand sanitiser to a commuter exiting a metro station. (Photo by Philippe Lopez/AFP via Getty Images)

While some may scoff at having to wear masks and not getting a seat, the Paris public transport system seems to have looked at everything and made it as safe as possible for its passengers.

This also is true for the Eurostar service, the regular shuttle connecting Paris and London via the Channel Tunnel. This service adheres to France’s strict measures and the wearing of masks is obligatory, with every other seat on the trains kept empty. Once passengers arrive in London, though, it is a different story.

Pictures of crammed Underground trains during lockdown circulated around the world, and with no social distancing measures made law, London’s approach did little to make passengers feel entirely safe.

Maureen Salamon, who recently returned to London from quarantine in the US, says her first impression on the Heathrow Express was as if there were no pandemic. “Some of the seats on the platform were blocked off for social distancing, however, inside the trains no seats were blocked,” she says. “No masks were for sale or in dispensers, and there was no signage asking people to social distance.”

At the larger station of Paddington, she did spot some signs asking people to stay two metres apart, but all in all, for much of the crisis in London’s public transport all distancing measures were mere suggestions. The Mayor of London had initially issued a statement for people to try and avoid public transport at busy times, to wear a mask and bring their own hand sanitizer, but it wasn’t until 15 June that masks were made mandatory on public transport.

Cleaners wearing protective face masks and gloves disinfect a coach in a metro station in Vincennes on the outskirts of Paris. (Photo by Philippe Lopez/AFP via Getty Images)

In Paris, there is a sense of comfort provided by the fact that the pandemic laws have been clear and in place all along. Recently I witnessed a couple board a bus without masks, and other passengers asked them to put them on. After some initial resistance, the newcomers conceded, and we all went back to standing and sitting at reasonable distances from each other, all wearing masks.

It would delight the 30 million visitors Paris normally welcomes each year to see the metro positively gleaming. The platforms are empty of litter, the floors of carriages are shiny, and the available seats invite you to sit without first wanting to set down a piece of paper to protect your clothes. Alas, the visitors have not returned yet, so the new normal of clean metros is purely for the delight of the residents. Long may it last.

Ulrike Lemmin-Woolfrey is a writer living in Paris.