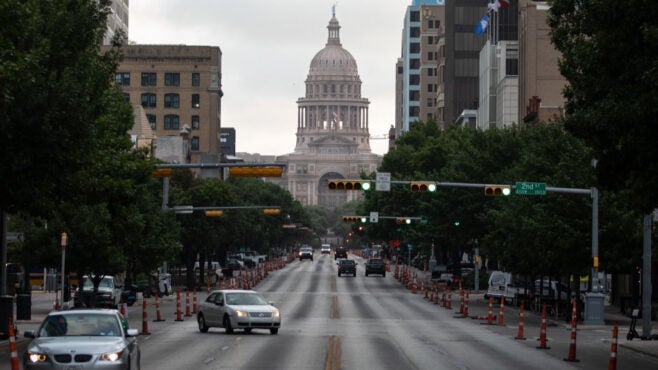 When voters in Austin, Texas, approved a major transportation expansion in November, many welcomed the change as long overdue. After several similar attempts failed in recent years, voters approved a $7bn transit expansion that includes the construction of a light-rail system, expanded bus services, a transit tunnel and an electric bike share fleet. It’s a titanic ten-year project, one that Austin’s mayor, Steve Adler, has said meets “so many long-held needs” for the city.

But Susana Almanza was anything but excited by the news – least of all about the commuter rail system. Almanza is a politician, community activist and director of PODER, an environmental-justice organisation based in East Austin. This historically low-income, working-class part of town has suffered from long-term underinvestment, and more recently its black and Latinx residents have borne the brunt of the costs of rapid gentrification. That experience factored into local resistance to a 2010 transit proposal, and those concerns still resound today.

“Rail to us signifies displacement and gentrification,” Almanza says. “We witnessed back then what rail was going to do to low-income and people of colour.”

These are common concerns in many US cities, where new rail lines can be treated as a tool for neighbourhood redevelopment as much as a mode of transportation. Often the people who might benefit from newly accessible transit are instead pushed out by skyrocketing housing costs.

This time around, however, Austin’s leaders are laying out a plan – and dedicating a sizeable budget – to protect those vulnerable residents from the start. The city’s transit expansion, called Project Connect, includes an equity plan to proactively counter the destabilising impacts of large-scale infrastructure projects. With $300m dedicated specifically to preventing low-income residents from being forced out of their homes, Project Connect represents a chance for Austin to prove that it can expand transit in ways that are both ambitious and equitable, if it can learn from the missteps of the past.

When voters approved Proposition A, the ballot measure for Project Connect put forth by the Austin City Council and the Capital Metro Transportation Authority, they authorised a transit expansion funded by federal grants and a 4% increase on property taxes. Notably, the $300m for anti-displacement efforts includes rental subsidies and assistance to homeowners. The idea is for low-income people who live along projected routes to be able to stay in their homes and enjoy the increased connectivity that comes with transit expansion, instead of being priced out of a neighbourhood that’s just become that much more appealing to developers.

The equity measures in the project build off of several years of efforts in Austin to counteract the worst impacts of gentrification. In 2017, Austin’s City Council passed a resolution acknowledging that displacement was a rampant problem in the city. The following year, voters passed a $250m bond explicitly for affordable-housing projects.

“You had both entities, the city and our Capital Metro agency coming at this with equity being part of our culture, part of our plan,” City Council Member Ann Kitchen says. “We got more intentional about it last spring, seven or eight months before we decided to put it on the ballot.”

In putting the proposal on the ballot, the City Council offered a binding “contract with the voters” for Project Connect that includes specific processes for how the anti-displacement funds are to be allocated. It requires that the city develop an equity assessment tool to evaluate the risks that communities face from gentrification as a result of transit infrastructure development as well as the specific housing needs of those communities. The measure also calls for a performance dashboard to track progress once the strategies are underway, and a community advisory committee to oversee it, one that must include people who are at higher risk of displacement.

The community advocates and officials who designed the anti-displacement strategy say this combination of tools and accountability is key to meeting specific, neighbourhood-level needs.

“We have neighbourhoods that are right now the last strongholds of homeowners of colour. Their needs are very different from another area that has a lot of older multifamily homes [where] there are a lot of renters,” says Awais Azhar, leader of Planning Our Communities, an advocacy organisation involved in developing equity measures for Project Connect. “So we need to understand the geographic difference and the strategies being employed.”

To explain her wariness of light rail, Almanza references the East Riverside Corridor Master Plan, a project adopted in 2010 to revitalise a disinvested east-side neighbourhood that was populated primarily with working-class Latinx residents. A central feature of the plan was a light rail running along the main street linking the downtown core to the airport. Crucially, the planning process for East Riverside did not involve input from low-income Latinx people, many of whom were renters. While the proposed rail line was not ultimately approved, the development that did happen resulted in the loss of over 1,000 affordable-housing units over the next several years, and thousands in the original East Riverside community were displaced.

“There wasn’t really a coherent strategy for trying to preserve access for low-income people,” says Elizabeth Mueller, an associate professor of community and regional planning at the University of Texas who has written extensively about gentrification and housing in Austin.

Almanza worries that Project Connect won’t be any different. Her own neighbourhood of Montopolis, a high-poverty area where the majority of residents are black or Latinx, was identified in a city report as one of the neighbourhoods most vulnerable to the effects of gentrification. It is scheduled to get a rail station as a part of Project Connect, but Almanza is concerned that the 4% property tax increase alone used to fund the project could be enough to cause the remaining black and Latinx homeowners in the neighbourhood to lose their homes.

If Project Connect’s anti-displacement strategies succeed, there is a real possibility for the extended transit system itself to achieve equity goals. The low-income communities that are at the greatest risk of gentrification are also the most dependent on public transit, while also being cut off from goods and services in other parts of town.

Over half of Austin’s income-restricted affordable-housing units are within a half mile of a proposed Project Connect rail station. Additionally, much of the bus service expansion is projected to serve areas east of Interstate 35, including plans for several neighbourhood circulator buses.

“To have a comprehensive transportation system that works for everyone in the city is so important,” Kitchen says. “Being able to get to the places you need to go is necessary to take full advantage of what you need to do in life: to get to work, school, healthcare, all of those things.”

This approach is why Kitchen believes the ballot measure passed this time, where other transportation initiatives have failed. The measure passed with 58% of the vote and received overwhelming support from communities of colour, while most of the opposition came from wealthier, majority-white areas.

But holdouts like Almanza have plenty of reason to remain sceptical; after all, the links between rail and displacement run deep.

Still, Azhar and others see Project Connect as a chance to depart from that painful history.

“For once, we are literally committing to the fact that we want to provide [for] folks who have historically been left out of such opportunities. It comes with an added challenge of: how do we make sure that an opportunity does not displace them?” says Azhar. “If we can pull this off successfully, it gives us a template not only for future transit projects but all infrastructure projects.”

Topics in this article : Mass transit