Every day, some 500,000 people walk along Oxford Street in London – Europe’s busiest shopping street. Now, the city’s mayor, Sadiq Khan, has proposed a plan to divert buses and taxis on to other parallel roads and redesign Oxford Street specifically for pedestrian use.

The scheme is in the process of public consultation, but the idea is to have the western part of the street pedestrianised by December 2018, followed by the eastern section by 2019 and the remaining area around Marble Arch by 2020. So far, so good – but for me, simply making Oxford Street a thoroughfare for pedestrians does not go far enough.

If you take a stroll down Oxford Street today, pedestrians are generally trying to walk along it as fast as they can. Those who pause or dawdle are met with a huff of frustration from the person behind. And then, you see a pair of people standing and chatting. They are creating their own social space, to enjoy a conversation among the bustle of pedestrians. They are being human.

A street designated for pedestrians won’t have any vehicles on it, but it will still look and act like a street. If its design treats pedestrians like traffic, then they will behave like vehicles – rushing from A to B. Yet it is people, not pedestrians, who are the lifeblood of the city. 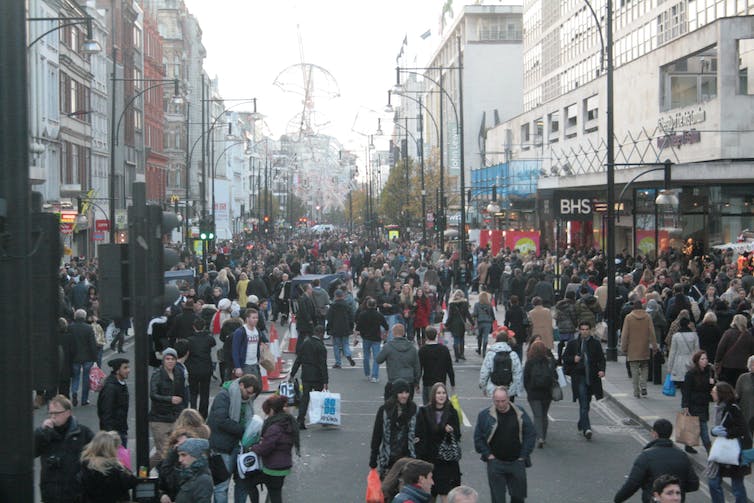 So, rather than becoming a street for pedestrians, Oxford Street should become a place for people – a place where people want to come and spend time, because it is a great space to pause, linger and simply be.

Renowned people-watchers, such as anthropologist Edward T. Hall, commentator Holly Whyte and more recently architect Jan Gehl, show that people define the spaces in which they feel they can socialise.

Human places also need soft edges: that is, boundaries defined not by walls, but by passable doors. Oxford Street is already full of doors on both sides, and the space between them is large enough to allow for lingering as well as movement. So there is potential to create a place which people can enjoy, rather than endure, as they make their way from one encounter to another.

In his study of personal and social space, Hall suggests that a comfortable distance for people chatting is between about 45cm to 120cm – a theory which myself and other researchers are currently checking in our laboratory. During our tests, we observed how a casual chat, evenly spread between three or four people, descended into a highly restricted, two-person encounter as background noise levels were increased.

So, for people to hear and see their companions in comfort, they need places of the right scale to stand, sit or lean, and a suitably low level of background noise. This requires street furniture and space to chat – as in Havana, where people come together to chat around 18th-century bronze cannons, which have been repurposed as bollards. 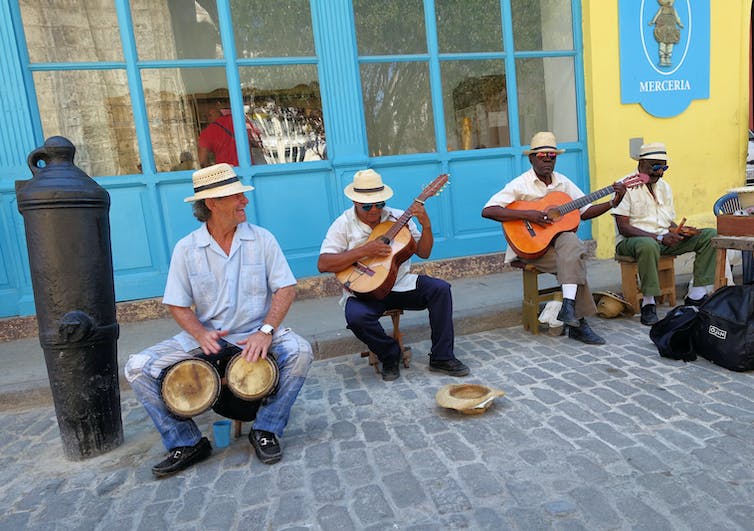 The bollards are a comfortable height for people to lean on and, as a result, the frontier between the pedestrianised city centre and the roads beyond is often full of people chatting and having coffee.

Another way to make Oxford Street more people-friendly would be to unmask the rhythm of the street. Scholar Henri Lefevbre, in his book Rhythmanalysis, talked a lot about the rhythms of the city – some of these are audible, like the sound of footsteps, while others are visual, such as the vertical columns between shops.

The bustle of many people walking means that the rhythms of footsteps along Oxford Street are rather lost at the moment, making the space sound featureless. But they could be revealed through design or even music. People function at different speeds – from a lingering pause to a purposeful walk – but always with a distinct rhythm. Those rhythms can be captured in the way a place is designed – acoustically as well as visually – by offering people great spaces where they can choose to stop and chat, or simply walk on by.

Having this freedom can stimulate other spontaneous activities – taking a coffee, engaging in conversation, enjoying a performance, looking at art – which could help to generate the varied experience that a wide range of people would enjoy. Make the place work for people, rather than pedestrians, and it will do wonders for society. After all, unexpected encounters with strangers or acquaintances have the power to make people feel happier and more fulfilled.

Perhaps the mayor’s scheme should be to humanise Oxford Street, rather than pedestrianise it – to create a place for people, and not just a street for pedestrians.

Nick Tyler is the Chadwick Professor of Civil Engineering at UCL.