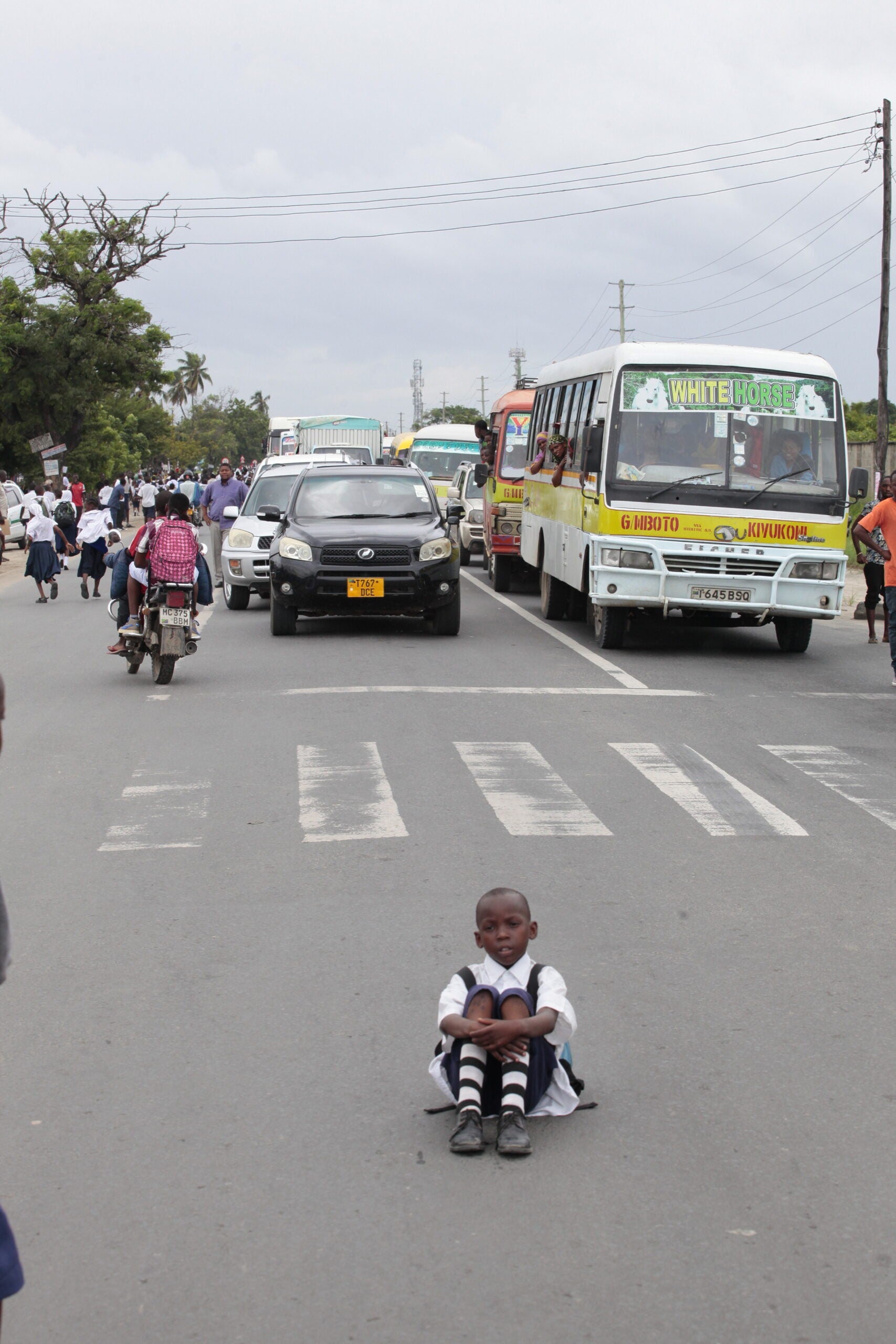 A school boy in Dar es Salaam conducts a protest after a classmate was struck trying to cross a busy road in front of Mzambarauni Primary School in 2016. The students wanted a speed bump. (Photo by Mohamed Mambo, via Amend)

Every morning, Cecilia, ten years old, wakes up in a slum in Dar es Salaam, Tanzania. She makes herself a chai tea and heads out alone on the city’s chaotic roads on her way to school.

Three-quarters of Dar es Salaam’s children walk to school in this fast-growing city of 4.4 million located on the Swahili coast in East Africa. The dangers they face on those journeys are extreme.

About 70% of the city’s population lives in informal settlements, in families earning the equivalent of just a few dollars a day. Cecilia’s family will likely never be able to afford a car. Only a small portion of Tanzania’s richest people drive. Cecilia’s father earns around $100 a month as a security guard.

In Dar es Salaam, slum dwellers rely almost exclusively on walking. Although car ownership is growing, Tanzania remains primarily a walking country. For every 1,000 people in Tanzania, there are only 39 vehicles; in the United States, by comparison, there are 873.

But even with so few cars, lower-income nations like Tanzania have staggering traffic death rates. According to the World Health Organization, people in “developing nations” account for just 1% of the world’s cars but 13% of the world’s 1.3 million annual traffic fatalities.

Commuters in sub-Saharan Africa are particularly vulnerable. In Tanzania, for example, two and a half times more people are killed in traffic on a population-adjusted basis than in the United States and about 11 times more than the country with the world’s safest streets, Norway.

Official transport data from many lower-income countries is unreliable, but Julie Babinard, a senior transport specialist with the World Bank, says that 40% to 60% of trips in Africa are made on foot. By contrast, according to the US Census Bureau, only 2.7% of US workers commuted by walking in 2017.

Workers crowd into the streets in fast-growing African cities like Dar es Salaam, Lagos in Nigeria and Abidjan in Côte d’Ivoire every morning when it is still dark, often hauling wares to sell at markets. Many cannot afford the price of urban housing and commute long distances from rural areas. “Often there are no transport services available,” says Babinard. “The poor are still needing to walk to work.”

In many so-called developing countries, transportation mode is stratified to an extreme degree by class. The World Resources Institute analysed transportation modes by income in Nairobi, Kenya, for example. Among low-income people, walking was the primary mode for some 62%, and only a vanishingly small share, 3%, traveled by car. For those belonging to the upper class, however, it was different; almost one-third, 29%, used cars for transportation, a slightly higher proportion than those who walked.

“Sub-Saharan Africa, in particular, has a vast income and mobility divide – a wealthy elite and small middle class while more than 90% of people earn less than $10 per day,” says Kate Turner, a spokesperson for the FIA Foundation, which supports road safety initiatives around the world.

Until very recently, infrastructure development in much of Africa has catered almost exclusively to drivers. According to a survey by the International Road Assessment Programme, only a small percentage – less than 10% – of roads in sub-Saharan Africa with speed limits greater than 40km/h (about 25 miles per hour) have footpaths at all. Even when they do have sidewalks, they are often impassible, crowded with vendors or consumed by motorcycle parking.

At times, international development groups have contributed to the problem. One of the worst examples is in Accra, Ghana, a city with a fast-growing population of 2.5 million.

In 2012, the Millennium Challenge Corp, an international nongovernmental organisation, funded the upgrade of National Highway 1, or N1, between the Accra airport and port. One stretch, 14km (8.7 miles) long, was widened to a six-lane divided highway. The project was designed to “reduce bottlenecks” on the highway, which carried about 25,000 vehicles a day, and aid Ghana’s economy.

Completed in 2012 and renamed the George W. Bush Highway, the N1 has been a disaster for pedestrians. Turner calls it “one of the worst international development mistakes… with vast numbers of fatalities.” Six of the ten most dangerous areas of Accra are on that highway.

An FIA report explained that the highway runs through residential neighbourhoods in Kwashieman, Lapaz and Abeka, where many residents earn as little as $2 per day. “The N1 highway has been built through the centre of the Kwashieman community, dividing it in two,” the FIA reported. “Throughout the day, hundreds of people line up to cross the six-lane highway with traffic travelling at speeds of up to 130km/h [approximately 80 miles per hour]. Whole families stand by the road attempting to get across to their places of work, to services and schools.”

Experts say that there is an urgent need for better pedestrian infrastructure – namely, sidewalks – in these countries. “In somewhere like Nairobi, the majority of people walk and bicycle,” says Turner. “But the only thing that’s happening in Nairobi is building more bypasses…  All it does is encourage more people to aspire to have vehicles. They end up back in the same situation where they have gridlock.”

In addition to inadequate infrastructure, poor nations have other challenges that make streets much more dangerous than wealthy nations. In many less developed countries, for example, there is little to no police enforcement of traffic rules.

“Basic safety rules just are not respected,” says Soames Job, global road safety lead for the World Bank. “In many countries, seat belts are not even a required element to be used. Some states don’t even have a license requirement.”

In addition, in many lower-income countries, police departments are often rife with corruption. For example officers, who earn low wages, may insist on a bribe to escort a group of people across a dangerous street.

Inadequate vehicles are also a problem. The cars that often arrive in poor nations are almost exclusively those discarded by wealthy nations. Many vehicles are overloaded, old and unsafe.

Under these conditions, schoolchildren under age 14, like Cecilia, are at the greatest risk. Compared with that of the United States, Tanzania’s population is very young, with about 45% of the population being less than 15 years old. A staggering number of youth in Dar es Salaam have their lives shattered just trying to make their way to school.

A survey by the African road safety group Amend of 15,000 children in 22 schools in Dar es Salaam was used to estimate death rates for children ages five through 14. The group estimated that there were about 45 traffic deaths per 10,000 children. This result indicates that far more children are killed by cars, trucks and motorcycles in urban Tanzania than are killed by Aids, malaria or diarrheal diseases.

People in Tanzania have fought for safer streets heroically. Children in Dar es Salaam sometimes stage impromptu protests, including a boy who sat in the middle of Nyerere Road in Dar es Salaam to protest a crash that injured one of his schoolmates in April 2016.

“Unfortunately, this being a regional road, responsible authorities have always discouraged the use of speed humps – speed reduction – due to the ‘political and economic sensitivity’ of these roads,” says Turner. “In the end, speed humps were not put in place, but a police officer was later brought in to assist pupils to cross.”

Cecilia’s case was held up as a case study in a report by FIA. In early 2016, she was one of the unlucky ones: she was struck by a motorcycle while walking to school on a footpath by the side of a busy road.

She struck her head and was rushed to the hospital by one of her teachers. (A lack of prompt medical care is another contributing factor to the high traffic fatality rates in poorer countries.) But even though she was released from the hospital that day, the effects have been long-lasting for both Cecilia and her family. She had to be seen at several follow-up appointments and missed a month of school. When FIA last reported on her case in September 2016, she had still not caught up with her classmates and had ongoing issues with concentration.

Her family suffered long-term financial repercussions, as well. Medical treatment for her injuries cost $100 – a monthly salary for her family. They were forced to borrow the money from family and friends, and more than a year later, they had not been able to repay.

Incidents like these compound the already enormous inequality in countries like Tanzania, say experts. “The poorest are most likely to be injured and to then become even poorer as a result of losing a breadwinner, the cost of treatment or a family member giving up work to become a carer,” says Turner.

In the aggregate, high traffic fatality and injury rates also prevent poorer nations from becoming wealthier and more stable. Traffic crashes exert huge economic costs on the overall economy and hinder economic growth. A 2018 report from the World Bank estimated that Tanzania could increase its gross domestic product 32% if it could reduce traffic injuries 50% over a 24-year period.

This article was adapted from Right of Way: Race, Class, and the Silent Epidemic of Pedestrian Deaths in America by Angie Schmitt. Copyright © 2020 by Angie Schmitt. Reproduced by permission of Island Press, Washington, DC.

Angie Schmitt is a writer and the founder of 3MPH Planning and Consulting, which is focused on pedestrian safety.
Websites in our network