As the local tourist board will no doubt tell you, Leeds has much to be proud of: grandiose industrial architecture in the form of faux-Egyptian temples and Italian bell-towers; an enduring cultural legacy as the birthplace of Goth, and… motorways. But stand above the A58(M) – the first “urban motorway”  in the country – and you might struggle to pinpoint its tourist appeal.

Back in the 1970s, though, the city council was sufficiently gripped by the majesty of the motorways to make them a part of its branding. Letters sent from Leeds were stamped with a postmark proudly proclaiming the city’s modernity: “Leeds, Motorway City of the Seventies”.

During the 1960s, post-war optimism and an appetite for grand civic projects saw the rapid construction of motorways across England. The construction of the M1 began in 1959; it reached Leeds, its final destination, in 1968. By the early 1970s the M62 was sweeping across Pennines, and the M621 loop was constructed to link it to Leeds city centre.

Not content with being the meeting point of two major motorways, Leeds was also the first UK city to construct a motorway through the city centre: the inner ring road, which incorporates the short motorway stretches of the A58(M) and the A64(M). As the council put it in 1971, “Leeds is surging forward into the Seventies”.

The driving force behind Leeds’ love of motorways was a mix of civic pride and utopian city planning. Like many industrial cities in the North and Midlands, Leeds experienced a decline in traditional manufacturing during the 1960s. Its position at the centre of two major motorways seemed to offer a brighter future as a dynamic city open for trade, with the infrastructure to match. In response to the expansion of the roads, 1970s council planners also constructed an elevated pedestrian “skywalk” in an attempt to free up space for cars at ground level. Photos of Leeds from that time show a thin, white walkway running through blocky office buildings – perhaps not quite as extensive as the futuristic urban landscape originally envisaged by planners, but certainly a visual break with the past.

Fast forward to 2019 and Leeds’ efforts to become a “Motorway City” seems like a kitsch curiosity from a decade that was not always known for sustainable planning decisions. Leeds’s historic deference to the car has serious consequences in the present: in February 2019, Neville Street – a busy tunnel that cuts under Leeds station – was found to contain the highest levels of NO2 outside London.

City centre planners did at least have the foresight to sink stretches of the inner motorways below street level, leaving pedestrian routes largely undisturbed. Just outside the centre, though, the roads can be more disruptive. Sheepscar Interchange is a bewildering tangle of arterial roads, Armley Gyratory strikes fear into the hearts of learner drivers, and the M621 carves unsympathetically through inner-city areas of South Leeds with pedestrian access restricted to narrow bridges that heighten the sense of a fragmented landscape. 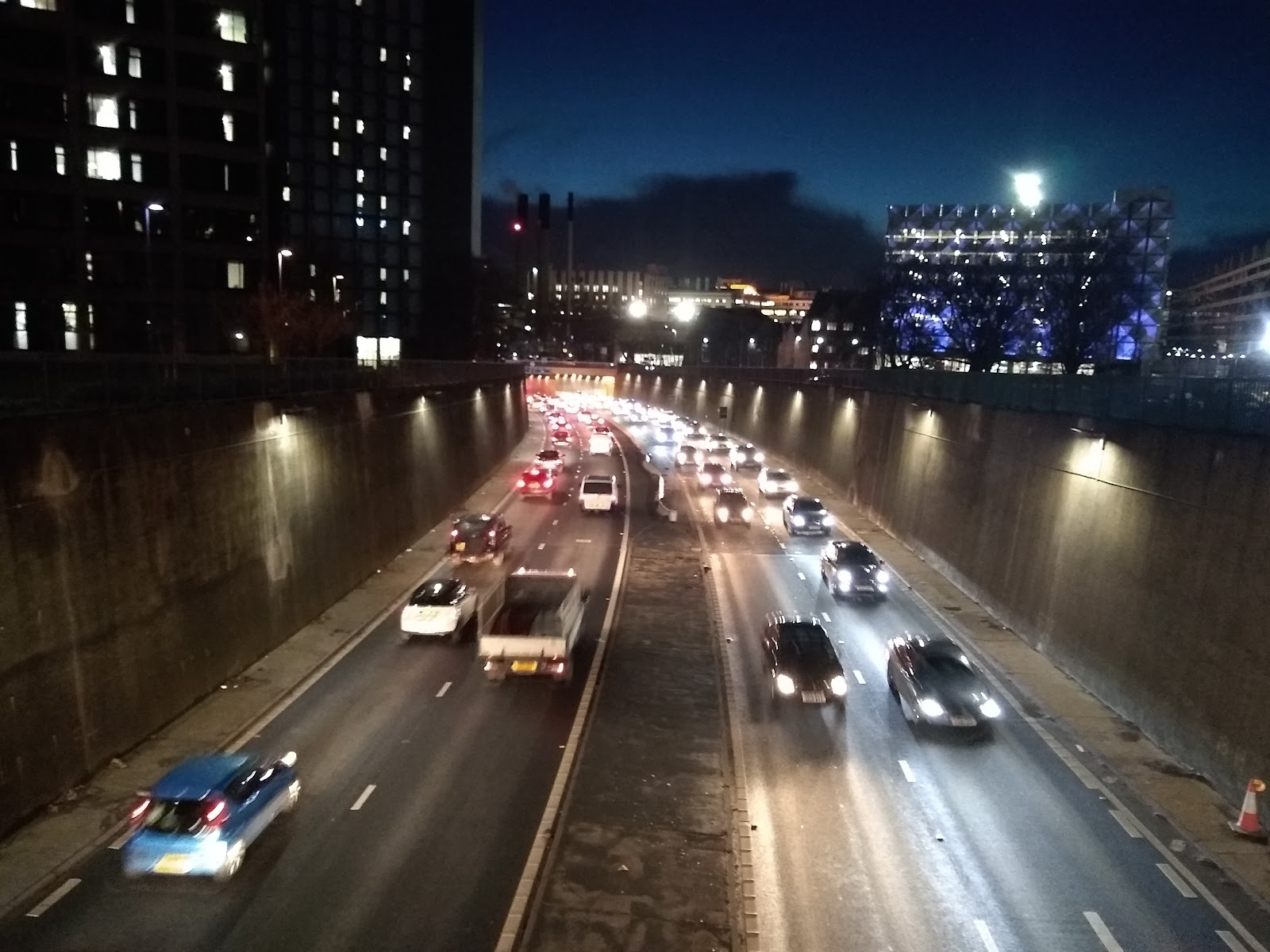 The greatest problem for Yorkshire’s “Motorway City” in 2019, however, is not the occasional intimidating junction, but the complete lack of an alternative to car travel. The dire state of public transport in Leeds has already been raised on these pages. In the early 20th century Leeds had one of the most extensive tram networks in the country. The last lines closed in 1959, the same year construction began on the A58m.

The short-sightedness of this decision was already recognised in the 1970s, as traffic began to build. Yet plans for a Leeds Supertram were rejected by successive Conservative and Labour governments unwilling to front the cost, even though smaller cities such as Newcastle and Sheffield were granted funding for light transport systems. Today, Leeds is the largest city in the EU without a mass transit system. As well as creating congestion, the lack of viable public transport options prevents connectivity: the city’s bus network is reasonable, but weaker from East to West than North to South. As a non-driver, I’ve turned down jobs a short drive away that would be a logistical impossibility without a car.

Leeds’ early enthusiasm for the motorway was perhaps premature, but there are things we can learn from the 1970s. Whatever else can be said about it, Leeds’ city transport strategy was certainly bold – a quality in short supply today, after proposals for the supertram were watered down to a trolleybus system before being scrapped altogether in 2016. Leeds’ rapid transformation in the 1960s and 70s, its grandiose visions of skywalks and dual carriageways, were driven by strong local political will. Today, the long-term transport strategy documents on Leeds City Council’s website say more about HS2 than the need for a mass transit system within Leeds itself, and the council has been accused of giving up the fight for light rail and trams.

Whilst central government’s refusal to grant funds is the greatest obstacle to Leeds’ development, the local authority needs to be far more vocal in demanding the transport system the city deserves. Leeds’ desire to be the Motorway City of the Seventies might look ludicrous today, but the political drive and utopian optimism that underpinned it does not.