In 1890, no one foresaw the rise of the internal combustion engine: horses were the fastest means of transport, and a status symbol.

Today, society stands at a similar tipping point. No one can really predict how transport will be used in the coming century, or if people will even need to travel as much as they do today. But some of the most commonly used modes of public transport may be closer to extinction than previously thought.

Buses have been a reliable feature of urban and rural landscapes for more than 200 years. They have helped to define communities; think of London’s red double-decker bus, or the iconic Greyhound bus across the US. And buses have traditionally been a great social leveller: ethnic minority groups fought hard for the right to share the same seats and stops and the poor enjoy the same regulated prices as the middle class.

Yet the end of the bus has already been signalled. In the UK, there has been a reported decline in bus and train usage over recent decades – and it’s not related to the nation’s sluggish economy. Today, only 5 per cent of journeys are made by bus, with 10 per cent by rail, 1 per cent by air, 1 per cent by bicycle and 83 per cent by car or taxi.

The UK has added 45,000 more private hire vehicles in the last year, driven by Uber and similar ride-sharing companies. These organisations are dominant in London, but they are becoming more active in other metropolitan areas.

Uber rolled out to eight areas across the UK in 2016, and Gett has grown by acquiring and repurposing traditional taxi companies such as Radio Taxis. And point-to-point minibus services, such as those piloted by Slide in Bristol, UK, and Chariot (backed by Ford) in San Francisco, US, are also expanding into more cities. Surely it’s just a matter of time before their reach expands properly into rural areas. 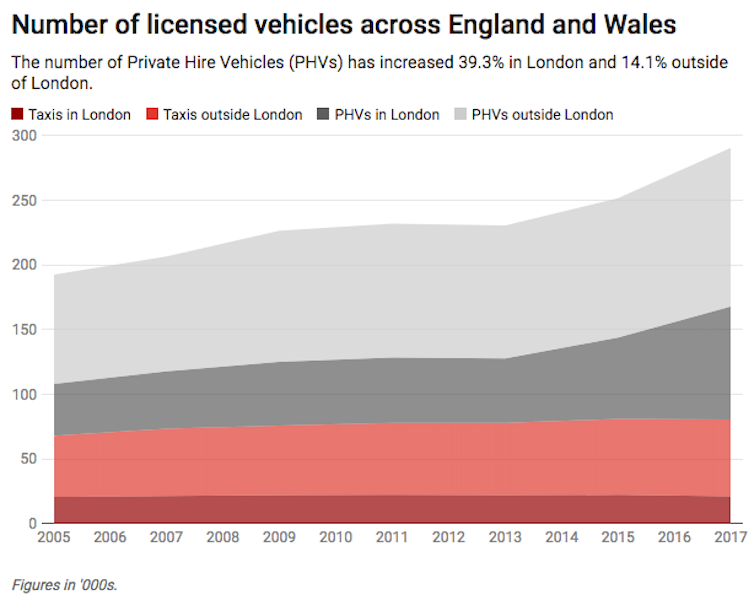 Get the data. Image: Department for Transport.

According to a British think-tank, the Institute for Public Policy Research, the convenience and automation provided by digital technology such as smart phones puts 63 per cent of transport jobs at risk of replacement over the next 50 years. Plus, fleets of autonomous vehicles are set to decimate the automotive industry, potentially reducing the number of vehicles required in the UK by over 75 per cent.

This transport revolution does provide an opportunity to increase the quality of service and to reduce subsidies, where they exist, by increasing efficiency. It could also lower transport staff numbers and the amount of cash spent on fuel. But all of this will come at a cost.

People who use public transport have traditionally enjoyed “positive” regulations, which ensures usage is fair and open to all. Subsidies from local or city government go towards servicing underused routes – in rural areas, for example – and offering discounted or free fares for young people and pensioners. But now, this model is coming under increasing pressure.

The cost of running a public transport system is effectively fixed in advance, and relies on enough passengers actually travelling to cover the costs. The average number of journeys per worker, per week dropped from 7.1 in 1988-92 to 5.7 in 2013-14, leading to a shortfall in expected demand. And changes in the funding rules mean there is no guarantee that operational subsidies will be available going forward; indeed, the central government has already removed its grant for London’s transport body.

A similar fate awaits metro systems and commuter rail services, and the problem will become chronic if – or rather, when – autonomous vehicles start to spread.

Silicon Valley tech start ups are now subsiding journeys with discounted travel to get into the transport market. But this is not for the economic benefit of users. Rather, it undermines the existing transport systems and create new, unregulated markets. This could lead to travellers paying whatever the monopoly dictates. In all likelihood, surge pricing will occur, forcing the less affluent into the least popular time slots and the least desirable vehicles.

Perhaps regulating these new modes of transport is part of the answer. But it’s also important to consider how subsidies are applied. One line of thought is that subsidies should be focused on areas where travel choice is restricted. But budgetary pressures could easily mean leaders choose to reduce, rather than redistribute, the subsidy. This would lead to further inequality between the rich and the poor, in a world where social mobility is becoming increasingly difficult.

To inform reasonable regulations and fair subsidy strategies, there needs to be a consensus, or some leadership, about the ultimate aims of transport; whether it’s for growing the economy, connecting communities or something else. In the UK this is more difficult due to governmental structures, whereby ministers focusing on delivery modes (such as rail, road and walking) rather than outcome (commuting, intercity travel and freight, for example).

But there are some good examples to follow, with countries such as Germany rethinking transport with a Department for Transport and Digital Infrastructure, which plans for a wider range of options to pursue social and economic goals.

One thing is for sure: there will be fewer buses around in the future. This disruption will affect communities, but this challenge could also create an opportunity to shape society to function better, by design.

Future generations will live by different rules, have different values and be presented with different opportunities to us. The decisions we make today will have a real and lasting impact on those generations in ways we cannot yet understand – let’s hope we get it right for them.