Walt Disney: animation pioneer, ruthless tycoon, union crusher… and train fan. Ever since his childhood in the town of Marceline on the Santa Fe railroad, Disney had a lifelong fascination with trains.

He not only included them in his films (most famously, the persistent Casey Jr. in Dumbo) but he built them too. After back injuries stopped him playing sport, he became interested in model trains, and in 1949, he built the miniature Carolwood Pacific Railroad in his garden. And every Disney park features some type of train transportation.

But which one is the best? This is the definitive ranking.

Before we start, let’s quickly set out what we mean by trains. No, rollercoasters don’t count, even if it pretends to be a proper railway (Big Thunder Mountain Railroad, I’m looking at you). We’re only interested in vehicles that run on some sort of rail, outdoors, under their own power. Lots of websites have ranked Disney parks by their rollercoasters, but only CityMetric will tell you which one has the best variety of rail vehicles. 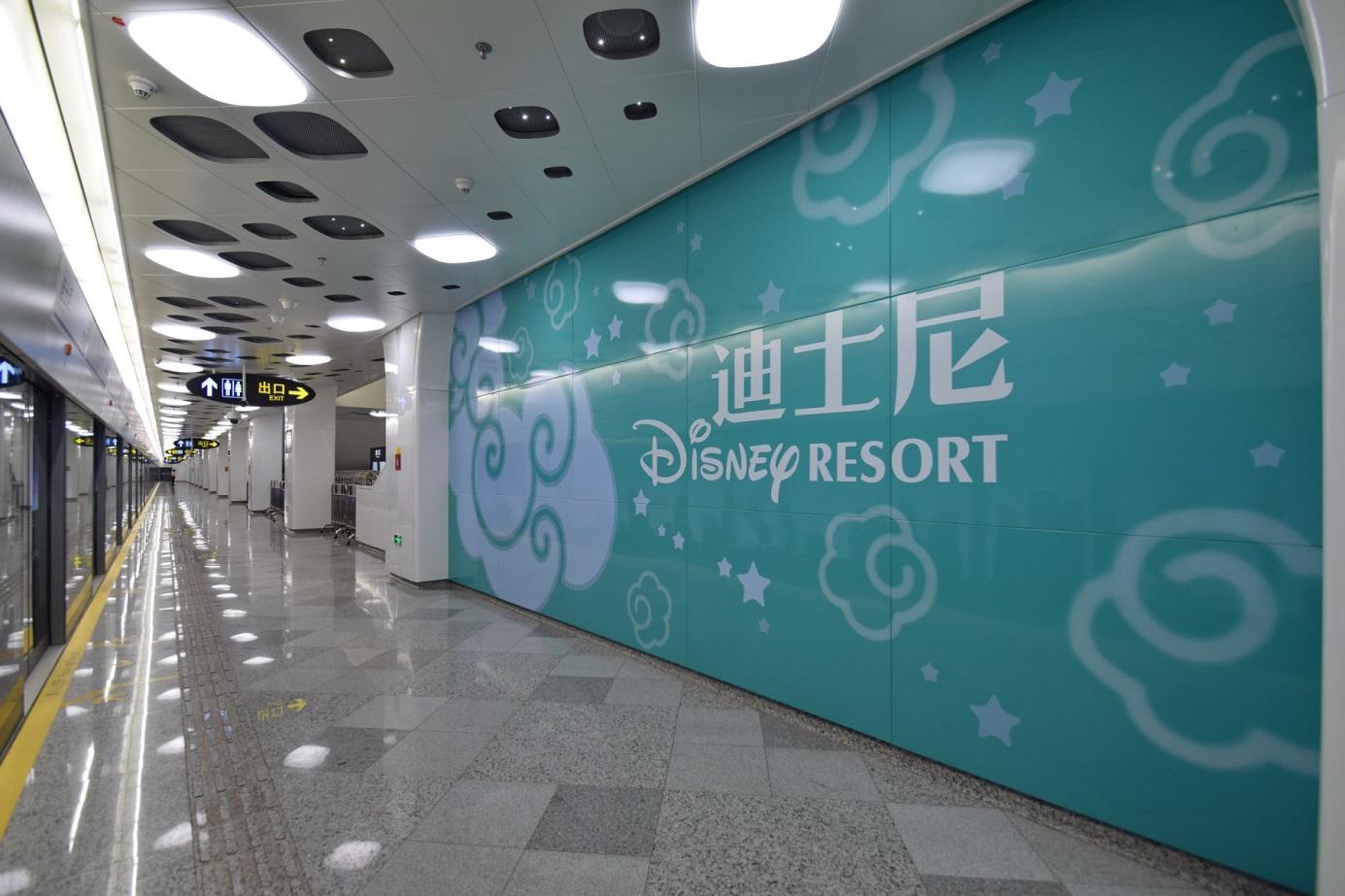 This is the best photo I could find of Shanghai Disney Resort station. More like, Dismal Resort. Photo: Baycrest/Wikimedia Commons.

The Disney park in Shanghai was supposedly specially tailored to Chinese tastes, and apparently Chinese people don’t like trains, because this park doesn’t have any fun ones. The only rail transport it has is a station on the Shanghai Metro. To be fair, that’s an impressive system – the second largest underground network in the world, but Disney doesn’t get the credit for that – and perhaps it explains why Shanghai residents wouldn’t think of trains as something to ride for fun.

You’ve got to admit – the windows are a neat touch. Photo: Hokachung/Wikimedia Commons.

At least this one has one train ride – the Hong Kong Disneyland Railroad which transports guests between the Main Street USA and Fantasyland areas – but unlike the equivalent railways in the other parks, the “steam” engines are just diesel locomotives dressed up with funnels and coal tenders.

It also slightly one-ups Shanghai Disney Resort by having not just a subway station, but a dedicated line on the Hong Kong MTR system, and the trains on it rather charmingly have Mickey Mouse-shaped windows. 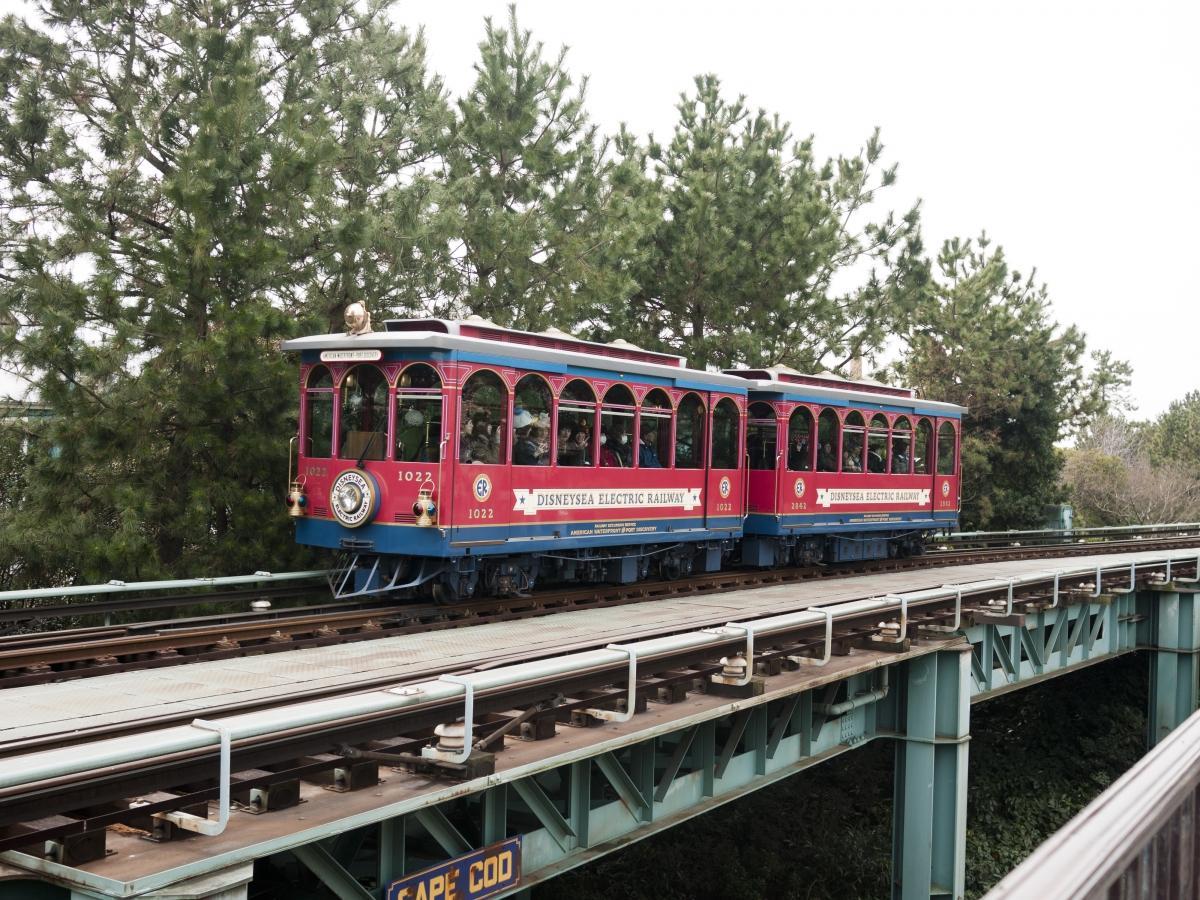 From here on in, it’s nothing but good stuff. Tokyo may be on the bottom half of this list, but it still has a monorail which runs around the park and connects it to commuter rail services at Maihama station, a genuine steam-powered sightseeing train called the Western River Railroad, and an overhead electric railway in the DisneySea part of the resort.

That said, it was a slow adopter of trains – under Japanese law, any railway line with more than one station used to be regulated as transportation. The monorail and the elevated line weren’t built until after that law was repealed. 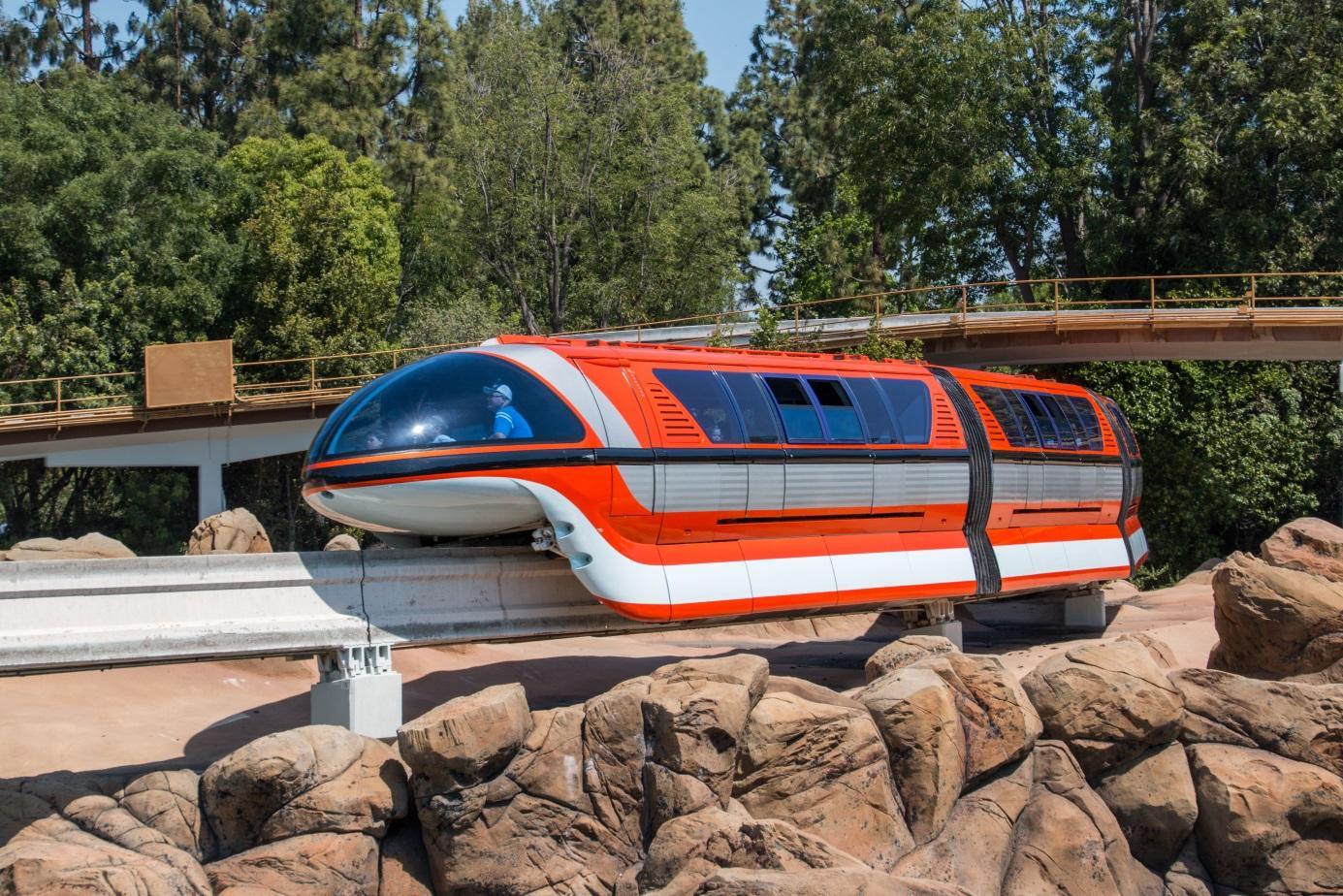 The far future, as seen from 1959. Photo: HarshLight/Wikimedia Commons.

There’s a lot to like here. The Disneyland monorail is a famous piece of retro space age engineering, while the steam railroad was directly inspired by Walt’s own model trains and those of his friend Ward Kimball, and the Main Street Streetcar is one of the few horse-drawn trams left in the world. More recently, the park has also added a tram that replicates the appearance of the classic Red Car streetcars (famous from Who Framed Roger Rabbit), although it actually runs on battery power despite having fake overhead wires.

Why doesn’t it rank higher? Well, the Casey Jr Circus Train is really just a children’s ride with only one station, and most of the others can also be found at… 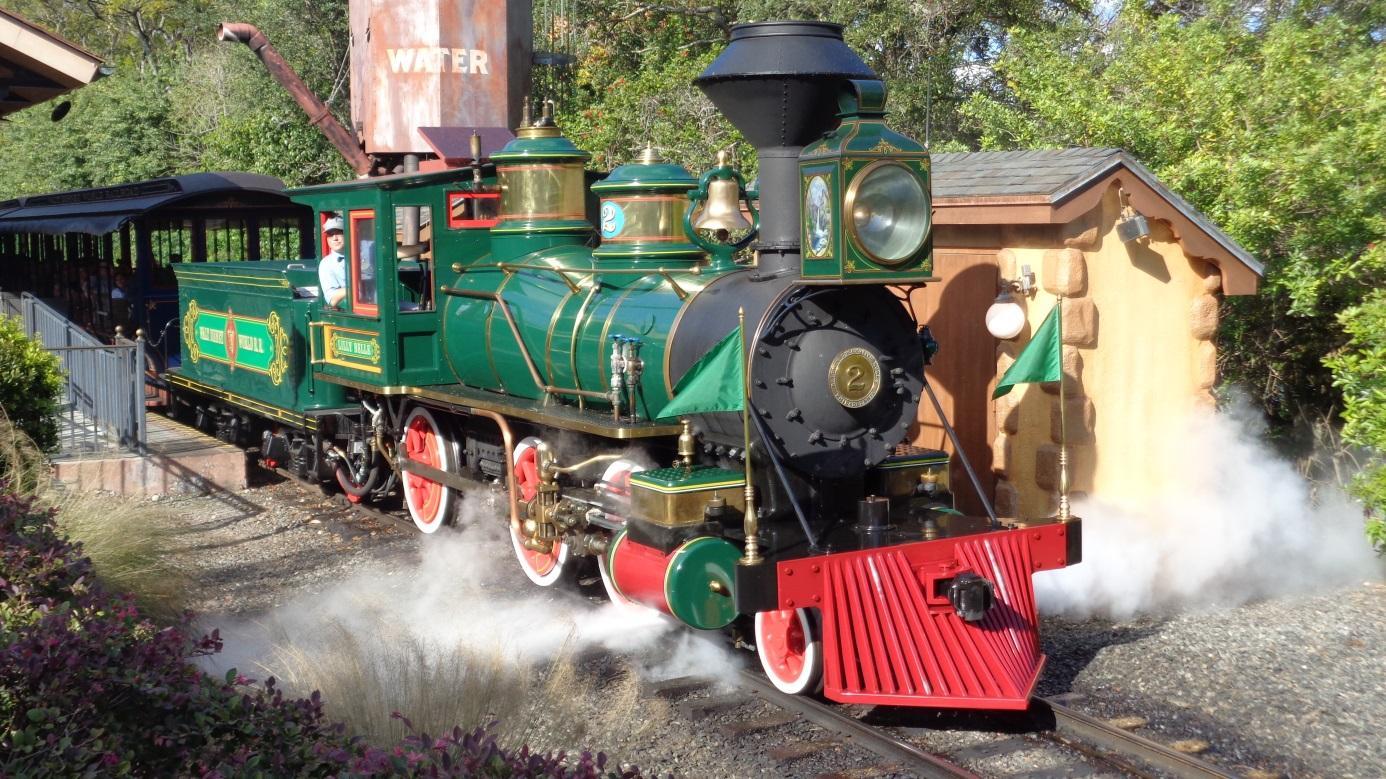 I should include a steam train somewhere. Might as well be here. Photo: Jackdude101/Wikimedia Commons.

Monorail? Check. Horse tram? Check. Steam railway? Check. No electric tram, but it does have a safari train, the Wildlife Express that runs through the Animal Kingdom, and the frankly bizarre Tomorrowland Transit Authority PeopleMover.

Supposedly a vision of public transport of the future, the ride only actually has one station, rendering it completely useless as a people mover, but it is powered by linear induction, the same basic principle that pushes maglev trains along. 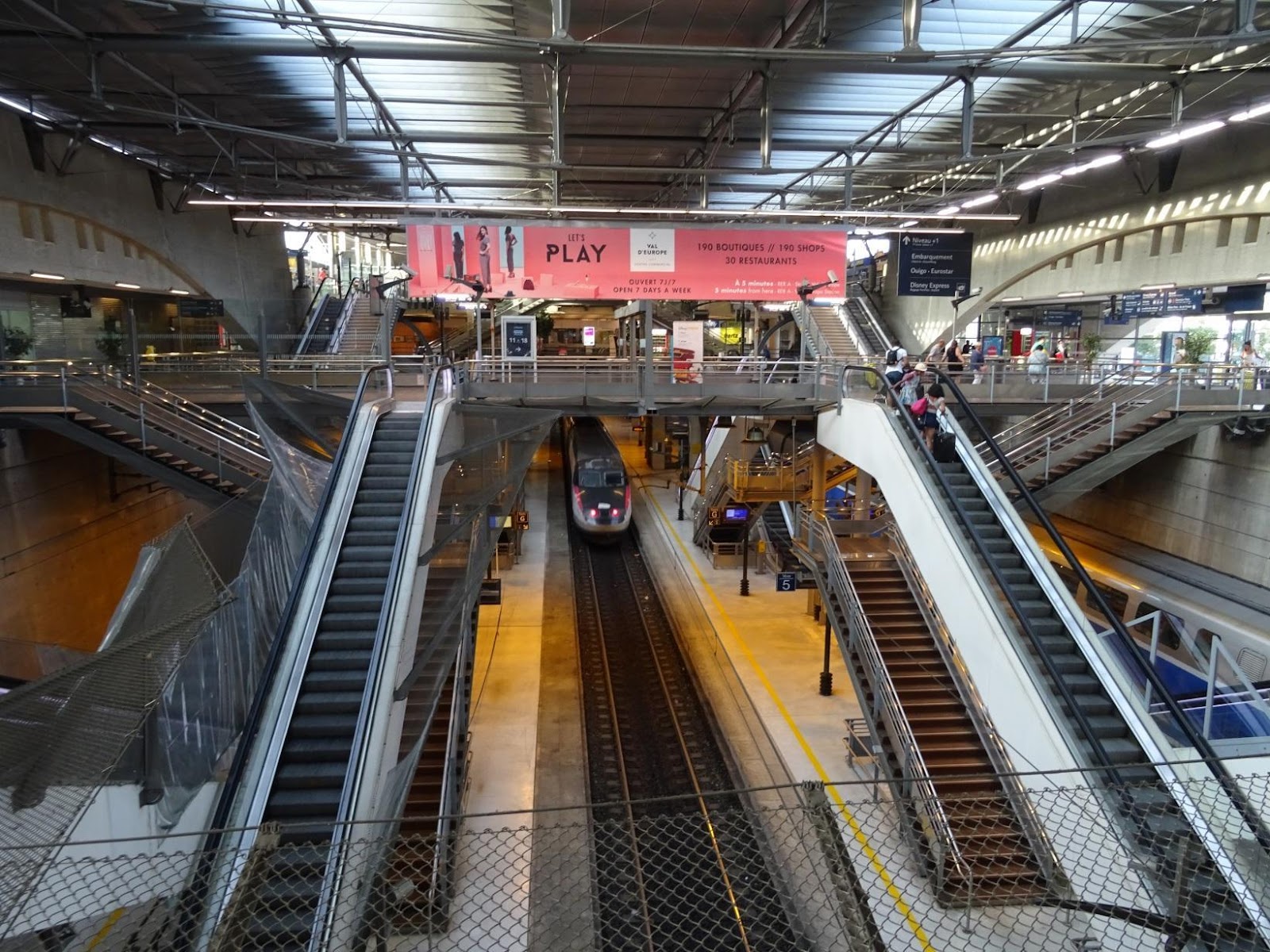 Keep your Space Mountains and your Pirates of the Caribbeans. This is all we want from a Disneyland. Photo: Remontees/Wikimedia Commons.

OK, there’s no monorail here, but there is another steam railway and another horse tram (and another Casey Jr). But there is also one thing that sets Disneyland Paris apart from all other Disney parks: le Gare de Marne-la-Vallée-Chessy.

Buried underneath the park is a station with both local train services on the Paris RER and high-speed lines. TGV services from all corners of France call at the station, meaning you are just a few hours away from Bordeaux, Lille, Marseille, Nantes or Strasbourg. Even better, the station also gets trains from Eurostar and Thalys to destinations like Amsterdam, Brussels and, of course, London.

Some of Disneyland Paris’s direct train connections. It’s not such a small world after all. Adapted from a map by madcap/Wikimedia Commons.

The best most Disney parks can do when it comes to international experience is a quick boat ride through the pretend dioramas It’s a Small World, but from Disneyland Paris, you actually can travel to another country. And that’s why it’s the happiest place on earth, provided that your definition of happiness mainly involves trains.