The New Road, which skirted the northern boundaries of London’s built-up area, first opened in the 1750s. Originally, it was intended to link outlying villages and provide a route to drive sheep and cows to the meat market at Smithfield without having to pass through the congested city centre. 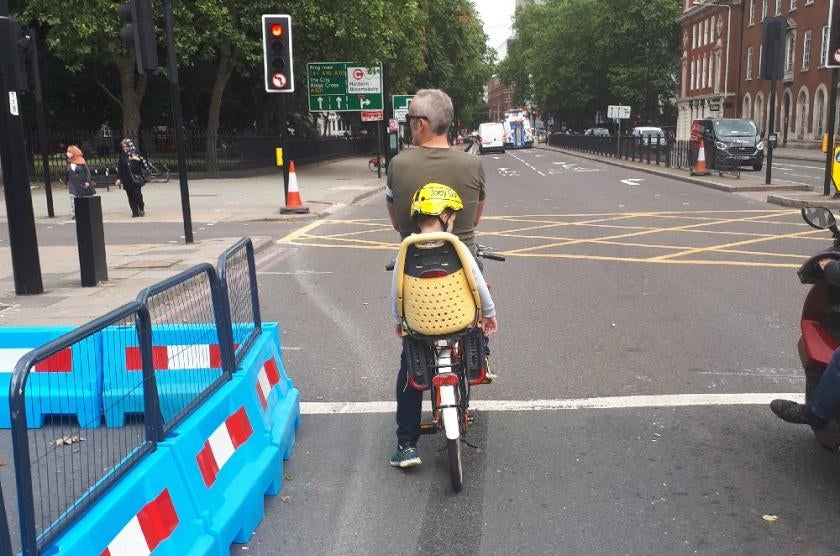 Cyclists on the Euston Road. (Photo by Jonn Elledge)

As with bypasses and ring roads the world over, however, it increasingly became congested in its own right. Today, you won’t often find livestock on the route, which is now Marylebone, Euston and City roads. But you will find up to six lanes of often stationary buses, cabs and private vehicles. In a city whose centre is largely free of multi-lane highways, London’s northern ring road has long been the sort of abomination that you avoid at all costs.

But now, somewhat surprisingly, the road is seeing yet another new use. This week, the first phase of a temporary cycle lane opened on Euston Road, the roughly mile-long middle section of the route. As London rethinks roads throughout the city, this addition to the cycling map falls solidly into the category of streets that didn’t seem like candidates for cycling before the pandemic.

It is, to be clear, temporary. That’s true of many of the Covid-led interventions that Transport for London (TfL) is currently making, though those in the know will often quietly admit to hoping they end up being permanent. In this case, however, the agency genuinely seems to mean it: TfL emphasised in its press release that the road space is already being allocated for construction starting late next year and that “TfL will work with local boroughs to develop alternate routes along side streets” when the cycle lane is removed.

At lunchtime on Friday, I decided to try the lane for myself to understand what an unlikely, temporary cycle lane can accomplish. In this case, it’s clear that the presence of a lane accomplishes only so much. A few key things will still leave riders wanting:

It’s one-way only. To be specific, eastbound. I found this out the hard way, after attempting to cycle the Euston Road westbound, under the naive impression that there was now a lane for me in which to do this. Neither I nor the traffic I unexpectedly found myself sharing space with enjoyed the experience. To be fair, London’s cycling commissioner, Will Norman, had shared this information on Twitter, but cyclists might find themselves inadvertently mixing with multiple lanes of much, much bigger vehicles.

It radically changes in width. At times, the westbound route, which is separated from the motor traffic by upright posts, is perhaps a metre and a half wide. At others, such as immediately outside Euston station, it’s shared with buses and is suddenly four or five times that. This is slightly vexing.

It’s extremely short. The publicity for the new lane said it would connect with other cycle routes on Hampstead Road and Judd Street (where Cycleway 6, the main north-south crosstown route, meets Euston Road). That’s a distance of roughly 925m. It actually runs from Gower Street to Ossulton Street, a distance of barely 670m. Not only does the reduced length mean it doesn’t quite connect to the rest of the network, it also means the segregated space suddenly stops: 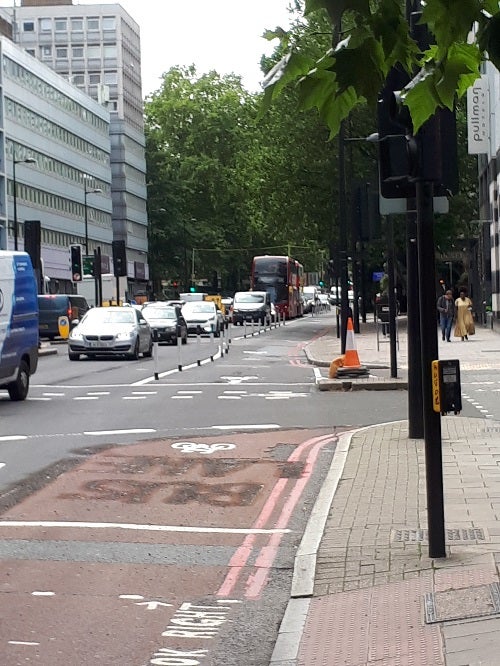 The junction between Euston Road and Ousslston Street, where the segregated lane suddenly, unexpectedly stops. (Photo by Jonn Elledge)

It’s for these reasons, perhaps, that the new lane is not yet seeing many users. Each time I cycled the length of it, I saw only a handful of other cyclists (although that did include a man cycling with a child on a seat behind him – not something one would have expected on the Euston Road of the past).

Though I hesitate to mention this because it feeds into the car lobby’s agenda, it was also striking that the eastbound traffic – the side of the road that had lost a lane to bikes – was significantly more congested than the westbound. If the lane is extended, it could, counter-intuitively, help, by removing the unexpected pinch points at which three lanes of cars suddenly have to squeeze into two.

There’s a distinctly unfinished air to the project – though, to be fair, it’s early days. The westbound lane needs to be created from scratch; the eastbound extended. At that point, it would hopefully be something TfL would be keen enough to talk about that cyclists started using it in greater numbers – and drivers got the message that they should avoid Euston Road.

The obvious explanation for why TfL is going to all this trouble is that it is in charge of Euston Road, and so it can do what it likes there. Building cycle lanes on the sides of nearby roads means working with the boroughs, and that’s inevitably more difficult and time-consuming.

But if the long-term plan is to push cyclists via side roads anyway, it’s questionable whether all this disruption is worth it. A segregated cycle lane that stops without warning and leaves you fighting for space with three lanes of buses, lorries and cabs is a cycle lane that’s of no use at all.