As Arlington, Virginia, bike shops struggled to meet increased demand, the number of weekday riders on the county’s network of bicycle lanes and multi-use trails rose 4% in March-December 2020 compared with the same period a year earlier. But the rate of injury crashes with vehicles plunged 28% compared with 2013–19, thanks to changes in riding patterns, IIHS researchers found. 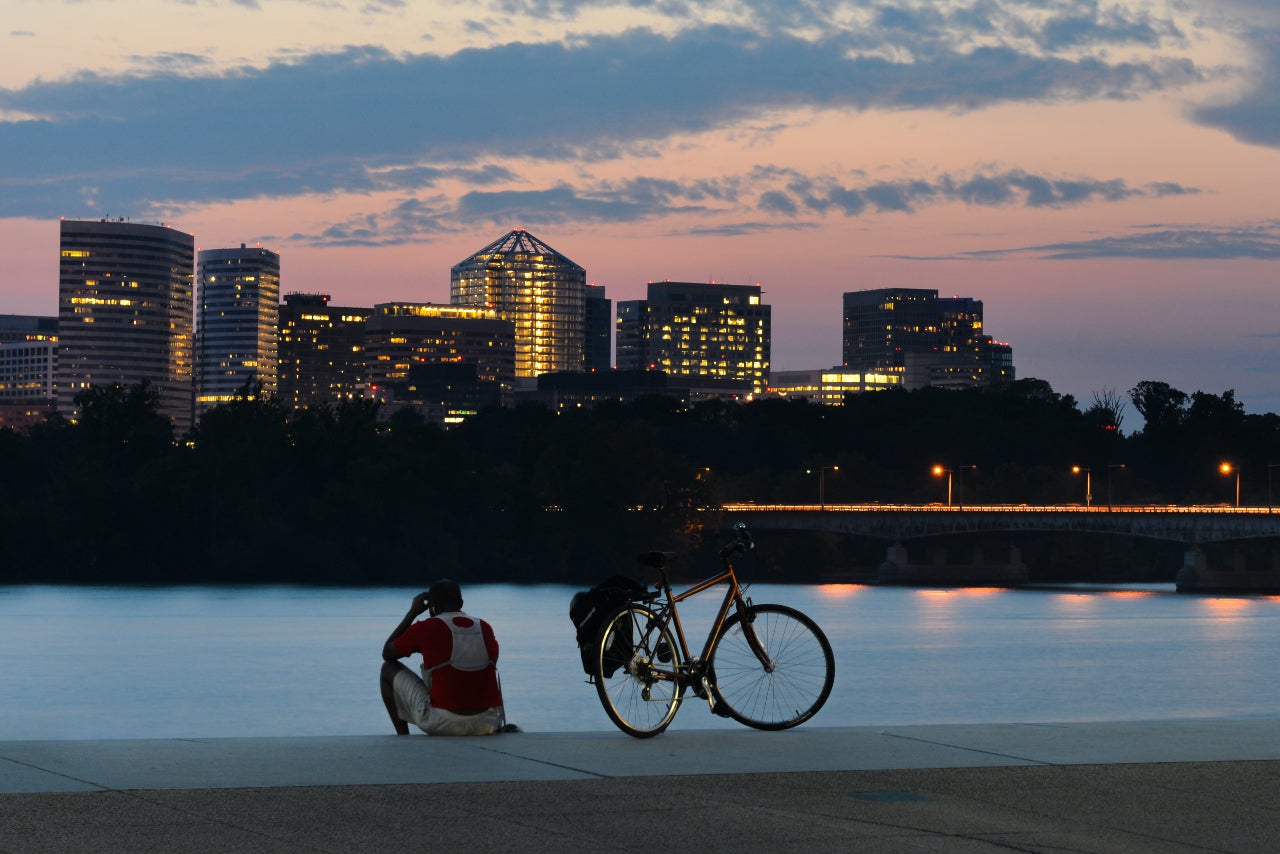 A cyclist’s silhouette in front of Rosslyn skyscrapers at sunset in Washington, DC. (Photo by Orhan Cam/Shutterstock)

“Fewer cars on the road may have led to fewer crashes between vehicles and bicyclists, but shifts in riding patterns also likely played a role,” says IIHS statistician Sam Monfort, the lead author of the paper. “Cyclists moved from unprotected bicycle lanes to off-road trails and rode less often in the morning hours, which are normally the most dangerous.”

With a median household income of about $120,000 and a population of around 240,000 people, Arlington is a densely populated, semi-urban county located across the Potomac River from Washington, DC. Considered among the most bicycle-friendly communities in the US, the county boasts a bicycling network that includes 52 miles of paved, off-road trails and 37 miles of on-road lanes, according to the most recent estimates. On nearly 80%t of the on-road lanes, bicycle traffic is separated from vehicle traffic by a painted line. Off-road trails are entirely separate from the roads except at crossing points.

To determine the impact of the pandemic on bicycle safety in the county, IIHS analysed crash data from the Virginia Department of Transportation (VDOT) and weekday traffic from 16 bicycle counters located along popular cycling routes, including ten on off-road trails and six on bicycle lanes, from March to December 2020.

As the use of other forms of transportation dropped dramatically, the counters registered about 40,000 more cyclists during the study period than in the same months of 2019. However, the rate of injury crashes between bicycles and motor vehicles fell to 1.98 crashes per 100,000 bicyclists in 2020 from an average of 2.74 over the prior years, thanks to changes in riding patterns.

Over March-December 2020, about 65,000 more Arlington bicyclists used off-road trails compared with a year earlier, a 7% increase. About 26,000 fewer riders used bicycle lanes, a reduction of 16%. About half as many people rode during the traditional morning rush hour and three-quarters more rode in the mid-afternoon. The number of evening riders remained essentially unchanged, though many of them migrated from bicycle lanes to trails.

All of these changes likely helped prevent a rise in injury crashes.

Over 2013–19, the morning crash rate per 100,000 riders was about 20% higher than midday or evening rates, which is consistent with past research that has found the morning rush hour to be the most dangerous time for bicyclists. Not surprisingly, prior research has also shown that bicyclists using off-road trails have the lowest risk of injury in a motor vehicle crash of all riders.

“We found that Arlington’s network of off-road trails was able to absorb a large amount of additional traffic in 2020 – at least 300 more riders per day compared with the year before,” says Monfort. “Places with fewer trails might have seen an increase in cyclists on the road instead, leading to more injury crashes with motor vehicles.”

Anecdotal evidence suggests that the character of the riders themselves might have changed, too. Less than 24 hours after Virginia Governor Ralph Northam issued a statewide stay-at-home order in March 2020, the line at Jan Feuchtner’s bicycle shop in Falls Church, a small city bordering Arlington, stretched out the door. It stayed that way until they ran out of bikes, he says, but the customers were different from prior years.

“The biggest pickup was probably family-oriented riding, which warmed my heart a little bit, because that’s a segment that has always been underappreciated,” Feuchtner says. “Commuter bikes, which had been essentially our hot spot, basically fell off.  It turned into leisure and recreational riding.”

That’s consistent with a nationwide survey by the NPD Group, a market research firm, that showed that sales of leisure bikes tripled in 2020 compared with 2019.

Not everybody was happy with all the new activity on cycling thoroughfares like the Washington & Old Dominion Trail, Custis Trail and Mount Vernon Trail, however. Facing crowds of walkers, joggers and new cyclists who weren’t familiar with trail etiquette, some hardcore riders shifted to alternative routes – especially when the roads were deserted – while other serious cyclists saw their weekly mileage plummet.

“I’ve gone back to some trail riding and some road. It’s about 50/50 now,” says Christina Watson, a 56-year-old federal employee and serious cyclist. “With people going back to normal, I see that the trails are very congested. The ones close to the city are really crazy.”

That conflict perhaps signals some challenges ahead if the pandemic usage patterns continue as long-time bicycle commuters return to in-office work. But several trail-improvement projects came to fruition during the pandemic that could help continue the momentum.

Last August, regional officials broke ground on a long-delayed plan to widen and improve one of the busiest sections of the Washington & Old Dominion Trail in Falls Church, for example. In March 2021 VDOT completed a trail bridge over US29 in Arlington that had been in the works for two years, and the county is moving forward with a plan to extend the widened path another two miles. The District of Columbia, like other cities around the country, is also considering whether to make some pandemic-related street closures permanent.

A similar “positive feedback loop” drove the creation of Arlington’s bicycle network beginning in the early 1970s, says Monfort. “The pandemic bicycle boom that happened in 2020 might fuel a demand for better facilities elsewhere in the country, which in turn may encourage more bicyclists.”