Night is falling on pandemic-paralysed New York. From the Bronx to the Rockaways, the city’s usually thronged streets are mostly empty of pedestrians and drivers alike. But as darkness gathers, the persistent whine of car engines, running at high speeds, can be heard in the neighbourhoods that lie along the city’s Robert Moses–era highways. The noise carries for miles in the odd silence of quarantine, mixing with the distant, near-constant wail of sirens to create a nightmarish soundtrack for the age of Covid-19. 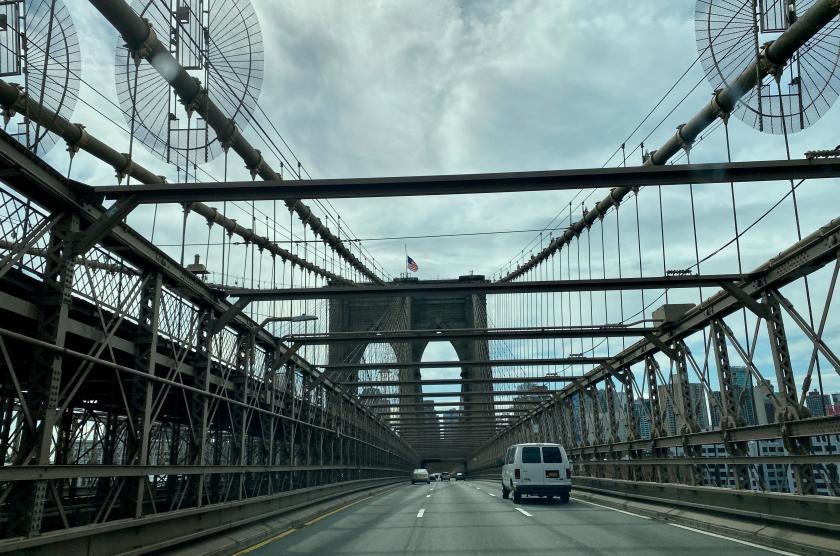 Low traffic is viewed on the Brooklyn Bridge, one of the busiest bridges in New York, on 14 April, 2020. (Photo by Daniel Slim/AFP via Getty Images)

“It sounds like a f***ing nascar race is happening on the highway right now,” tweeted the Brooklyn-based account Bay Ridge Drivers.

In cities around the globe, the shutdown has led to a radical downturn in automobile traffic as drivers stay at home. On 10 April in the five counties of New York City, for example, estimated vehicle miles traveled were down between 78% and 92% from January volumes, according to Streetlight, a mobility data company. In Denver, driving is down an estimated 75%. In Houston, 66%. In Miami, 72%. In Chicago, 68%. Several major auto insurance providers have offered discounts to their customers to reflect the reduced risk, with premiums cut by as much as 20%.

The empty streets of the world’s cities, however, have in many cases presented a seemingly irresistible temptation for speed-happy drivers. According to an analysis of data by Streetsblog NYC, a news and advocacy site that has been leading the way in compiling data on road use at the American epicenter of the pandemic, the number of speeding tickets triggered by city cameras in school zones went up by 57% in the first 10 weekdays after New York state implemented its “Pause” order on 22 March. Between 2 March and 9 April, six motorcyclists and drivers died on New York City streets and highways, a figure that matches the highest count for those dates since the city’s Vision Zero initiative began in 2015.

“At the same time, car collisions were down 54% between 8 March and 5 April, according to the NYPD,” Streetsblog’s Gersh Kuntzman wrote on 9 April, “meaning that a likely reason for the increase in motorist deaths during this year’s coronavirus crisis is simply that drivers are traveling at excessive speeds, which makes crashes far more likely to be fatal”.

In London, speeding is also causing concern. According to Transport for London, since 20 March, reduced traffic volumes have resulted in far fewer crashes, and a 68% drop in deaths and serious injuries. Speeding, however, is way up. In one case, a driver was recorded going 134mph in a 40mph zone.

“All enforcement zones have seen a rise in driving speeds,” Superintendent Andy Cox of the Metopolitan Police’s Roads and Traffic Policing Command wrote in a press release. “This includes 20mph zones where many key workers are walking or cycling. Such driving behaviour is totally unacceptable and speeding increases the risk of a serious collision which will further impact on the NHS, Fire and Police services, abstracting them from working on Covid-19-related issues and potentially depriving patients of access to intensive care facilities and medical care”.

In Austin, Texas, speeding appears to be offsetting any benefits from the reduction in crashes. “While average traffic volumes appear to be down ~50% from earlier this year, overall crashes are only down ~20% and we’ve seen an increase in serious injuries by ~15%,” Susanne Harm of the city’s transportation department writes in an email. “One takeaway from this is that people who continue to drive seem to be getting into serious car crashes more frequently, which is likely tied to many drivers choosing to go at faster speeds than normal.”

To complicate matters, locked-down cities around the globe are facing the speeding issue at a time when their human and financial resources are already stretched to the breaking point by the pandemic response. “Speed kills, and is the main factor that turns a crash into a fatality,” writes Alex Engel, spokesperson for the US’s National Association of City Transportation Officials, or NACTO. “Cities are sharing their experiences. In a fast-moving pandemic, cities are acting rapidly, too, and are collaborating like never before on urgent responses to new challenges”.

Engel cites Los Angeles, where speeding is up by 30% on some streets and officials are experimenting with retiming signals to slow drivers down, and Oakland, California, whose 74-mile “slow streets” program is opening up residential thoroughfares to pedestrians and cyclists in an effort to provide a healthy, safe place to exercise for its cooped-up citizens. Cities across the US are closely watching Oakland’s efforts, which have been implemented largely through partnerships with neighbourhood organisations, to minimise the burden on city staff.

In New York, though, Mayor Bill de Blasio has said that he won’t be adopting the Oakland model anytime soon, because New York is “profoundly different from other cities.” Meanwhile, the sound of drag racing might not let up until the virus itself loosens its grip.

Sarah Goodyear is a Brooklyn-based writer and co-host of The War on Cars podcast.