The coronavirus pandemic has brought unprecedented loss of life as well as economic devastation in the billions of dollars globally. But the crisis has come as a blessing to many boda-boda operators in East Africa. 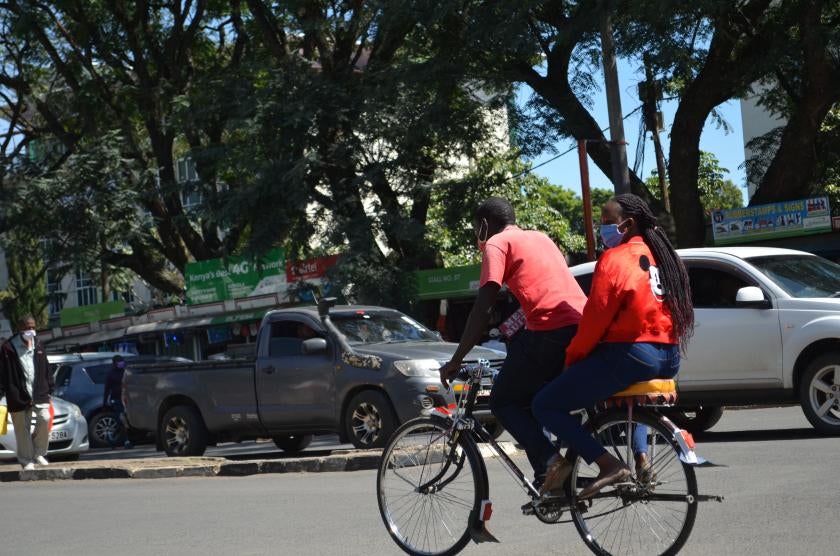 A boda-boda carries a passenger in the Kenyan border city of Busia. (Photo by Daniel Sitole)

Bicycle taxis, locally known as boda-boda, are a popular mode of transport in this region of the continent.

Boda-boda drivers say that restrictions on many other forms of transport, combined with the closure of international borders in the region, have boosted their businesses.

“Times of human despair are our dollars-mining seasons, especially for us operating near international borders,” says Paul Wanyama, 43, a boda-boda driver based in Busia, near the Kenya-Uganda border. “Our services are in high demand when everything else fails, like now. No movements of persons by air, water or roads, and borders are closed. Police are on 24-hour surveillance on both sides of the borders.”

Boda-boda drivers use their knowledge of the terrain to make trips that would otherwise be impossible during the crisis. They are able to carry goods and passengers across borders by making use of clandestine routes, sometimes through remote villages, to ensure their clients get to their destinations safely. The bicycle taxis are also more flexible in areas where roads are dilapidated, and they make less noise than cars, allowing them to escape the notice of authorities.

Before Covid-19, citizens of Kenya, Uganda and Tanzania enjoyed 24-hour unrestricted cross-border movements and trade. Traders did not need passports or visas, just national identification cards. The pandemic brought all of that to a sudden halt. No cross-border movements or trade are allowed, with the exception of cargo trucks carrying essential commodities.

The Kenyan government put in place additional restrictions such as a 7pm-to-5am curfew in some cities, including Nairobi and Mombasa. The measures are intended to curb the spread of Covid-19.

John Onyango, 50, a boda-boda operator in Busia, says he and others secretly help traders who own shops in Uganda or Kenya to cross the border every morning and pick them up again in the evening, evading Kenyan and Ugandan police border patrols.

“We are natives here and know the terrain better than any police officer. The police use cars and patrol in groups, but for us, it is a rider and the passenger,” Onyango says. “Our services are excellent and trusted in the region because we do not betray our clients. We do not care if a client is a drug trafficker, murderer or a high priest. Our mission is offering transport services.”

Boda-boda fares vary depending on the time of day, distance, location and the passenger’s circumstances. A typical ride starts at about $0.50 for a 5km trip. The fare can go as high as $10 in extreme cases.

“A criminal escaping, people transporting contraband goods or drugs pays more than an ordinary passenger,” says Antony Barasa, 35, a boda-boda operator in Malaba, Kenya. “But sometimes we help those wanting our services to escape inhuman conditions, political or religious prosecutions, or going for medications.”

He adds that many refugees in the region use boda-bodas at low or no charges to flee their home countries.

Patrick Otieno, 80, is now retired after 40 years as a boda-boda driver in Kenya and Uganda. He says the Covid-19 pandemic is the third super-boom in the history of the local boda-boda economy since they first became popular as a public-transport option in the 1960s. 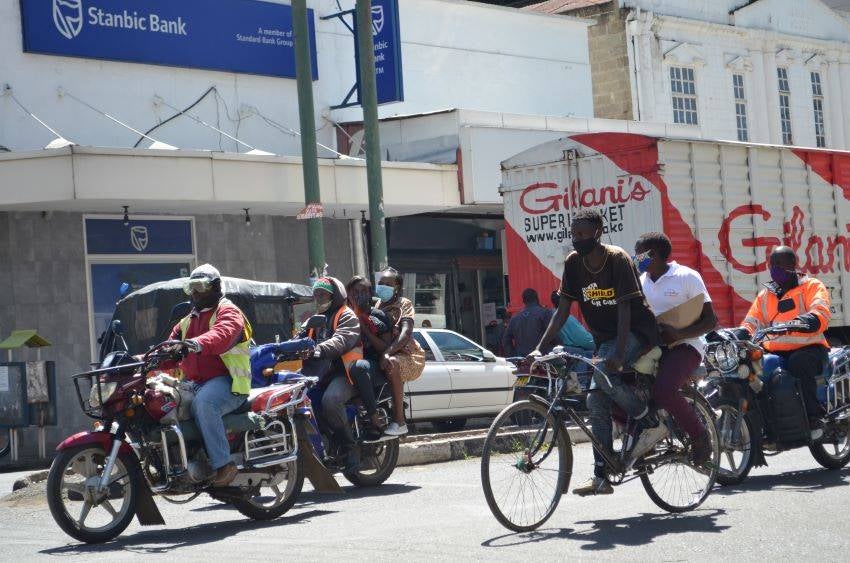 Boda-boda of both the motorcycle and bicycle varieties. (Photo by Daniel Sitole)

The first boom came during a rise in the illegal smuggling of coffee beans from Uganda to Kenya in the mid-1970s, concentrated around the Chepkube Market in Bungoma, Kenya. The local coffee industry had taken off following a cold snap in Brazil that destroyed coffee plantations, causing a global shortage. Later, US President Jimmy Carter imposed a ban on the importation of Ugandan coffee, due to human rights violations by Idi Amin, which prompted black-market coffee to flourish.

“We transported bags of coffee across the Kenya-Uganda border through the Chepkube village. Our job began at 8pm to 4am every day until 1978,” says Otieno.

He says he earned a lot of money during that period, allowing him to marry two wives and to build two semi-permanent houses. He also opened a grocery shop in his Busia home.

The second boom started in 1978 during the Tanzania-Uganda war that led to the overthrow of Amin.

“[Government] ministers, army generals and their families, and thousands of civilians fled into Kenya using boda-boda to cross the border. I carried hundreds of them, and some had bags of cash in Kenya shillings, sterling pounds and US dollars,” says Otieno.

It was during this time that bicycle taxis were named boda-boda, because the fleeing Ugandans did not understand the Kiswahili language. The only way to communicate with the drivers was shouting “border-border,” meaning take us to the border.

The boda-boda economy has since evolved. The majority of operators moved to Chinese motorcycles, but the original bicycles continue in many cities and border crossing points. The sector, motorcycles and bicycles put together, employs millions of people across East Africa.

Despite the crucial role the drivers play in the mobility of persons and goods, they are also blamed for rising crime and road collisions in Kenya.

According to a 2019 National Crime Research Centre report, boda-boda involvement in murder cases accounts for 37.5% of all homicides, robbery with violence 52.9%, assault 67% and causing death by dangerous riding 79.5%.

“Some riders work with criminals, and some do participate in crimes,” says Joseph Mutebi, a transportation security trainer and consultant. “That is why more than half of criminals are reported to have escaped using boda-boda. They are violent to other road users, do not observe traffic rules and dangerously use any open space, including pavements.”

The national chairman of the Boda-boda Association of Kenya, Kevin Mubadi, insists his 1.2 million members are not involved in crime but agrees that boda-boda in general are helping people make trips despite pandemic-related restrictions.

“This is true that some riders are smuggling people across the locked areas, and as an organisation, we have given them a stern warning and advised the government to deal with such individuals seriously,” Mubadi said in an emailed statement. “People in Kenya are allowed to ride their bicycles and motorcycles. Criminals buy them for the purposes of committing crimes, and their actions are attributed to genuine boda-boda riders.”

Daniel Sitole is a Kenyan journalist and a member of the Foreign Correspondents’ Association of East Africa.