It seems every day, another pedestrian or cyclist is injured or killed in Toronto. In this respect the city is living a historical déjà vu: interwar Toronto (1919-1939) witnessed similar numbers of walkers and bikers, especially children, dying on its streets by the same cause: cars.

Yet, like their earlier cousins, today’s Torontonians hear the same platitudes voiced by police and community leaders: cyclists and pedestrians must actively defend their own self-interests. In other words, cyclists and pedestrians must ultimately construct ways to protect themselves — by themselves — on thoroughfares full of dangerous motor vehicles.

How odd that in 2018 the best Toronto’s policymakers and enforcers can do is to rehash a century-old idea that in practice failed catastrophically in the past? Historical fatalities involving children give us a glimpse into Toronto’s remarkably unimaginative approach to the street.

Toronto’s leaders alone created this intolerable street-policy circumstance. Their virtual indenture to the car since the 1910s effectively renders them policy-impotent. 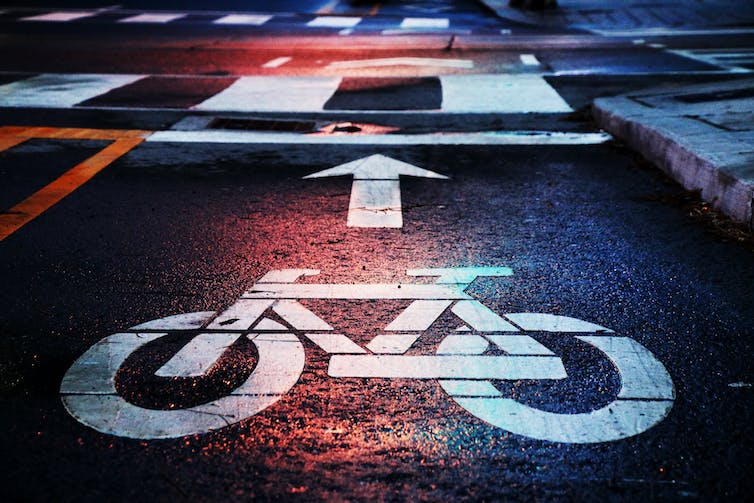 The only method to guarantee pedestrian and cyclist safety on streets currently dominated by motor vehicles would be to prohibit automobiles. Since this idea is inconceivable, what is left for municipal leaders to say or do — except lamely urge people to be careful?

Torontonians have understood the threat to civic life posed by automobilisation since the 1910s. They learned the excruciating effect of unforgiving motor vehicles on children, as they watched their own children die on the very streets in front of their homes.

At the end of the First World War, children were losing their lives by the dozens at the wheels of motorists (90 between 1919 and 1921). Throughout the 1920s and 1930s, it was common knowledge that Toronto’s children were imperiled.

The city’s newspapers almost daily, and certainly gruesomely, described how motor vehicles bruised and lacerated the “little tots of the street,” broke their bones and shattered their skulls, flayed and crushed them to death. Dragged and battered in their ancestral playground — the street — Toronto’s besieged preschoolers, many just three years old, had no recourse. Protection by government policy never happened.

Changes from horses to cars

True, bicyclists “scorched” through newly asphalted fin de siécle streets, sometimes running down adults and children in the first instances of modernised hit-and-run crime, but for the overwhelming majority, the street was safe. By 1920, with booming motor vehicle ownership and traffic, pedestrian, bicycle and automobile collisions became commonplace.

Automobiles raced through intersections, drove on both sides of the road, challenged streetcars and passed them as riders disembarked. They jumped curbs and collided with walkers (and buildings). They raced trains at level crossings, frequently operated erratically and, of course, cut off and bumped cyclists.

Crucially, the time-space compression of fast-moving traffic was difficult to assess for both pedestrian and driver, and both — but most especially children — struggled to adjust to the new culture of the street. 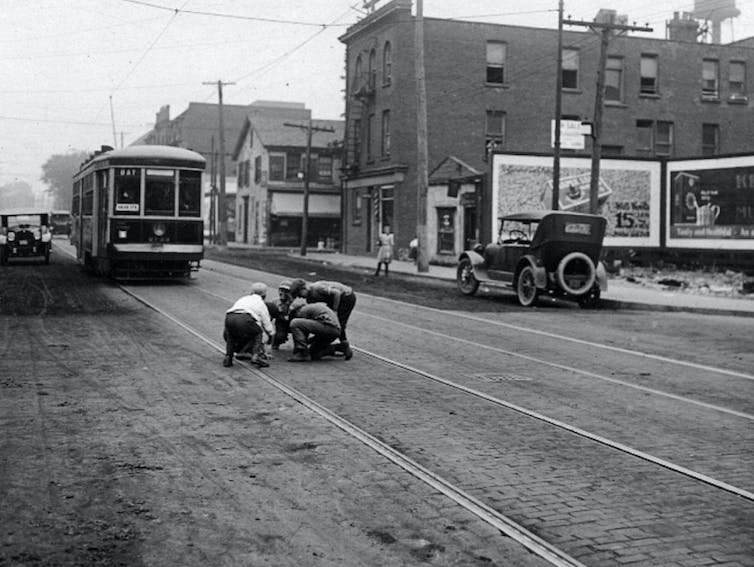 A staged image from the Ontario Safety League campaign for pedestrian safety in 1923, showing examples of improper behaviours by pedestrians and cars. Image: City of Toronto Archives.

Compounding the circumstances, foot traffic escalated as the population swelled with hundreds of thousands of opportunity-seeking migrants. Multitudes awaited public transit, paraded to schools, churches and stores, and congested sidewalks.

The consequent crisis of pedestrians and automobiles was inevitable. And neither the city nor the province had any idea how to stop a person from walking in front of a moving car, or how to prevent a motor vehicle from hitting a pedestrian.

‘The chariot of prosperity’

The real problem from a policy perspective was the automobile’s economic significance. Its value was obvious to all, particularly to Toronto’s politicians and business people. As the “perfect machine,” it was “the chariot of prosperity,” and quickly “achieved its rightful prerogative over all other methods” of transportation.

“The king of vehicles,” the Globe wrote, “the motor-driven car, has won its place in the civilised world”. That this paragon of civility fomented lethal conflict with pedestrians, including kids playing tag or chasing butterflies, was a paradox to be ignored.

So what did Toronto’s policymakers do to stop cars from killing children on the streets? Nothing.

Deputations to and motions in City Council (in 1920 and 1928 respectively) to ban motor vehicles on streets where children played were unsuccessful. The result: every year between 1927 and 1934, dozens of toddlers died horribly in the streets.

In 1934, after three consecutive years of unconscionable fatalities — 30 toddlers per year — Ontario’s highways minister, Leopold MacCaulay, exclaimed that he could not “help but shudder at… the needless mangling of little ones.”

Ironically misunderstanding his role in the policy solution, MacCaulay believed it “would seem entirely unnecessary to ask [drivers] to protect” these children. “The instinct of humanity should be sufficient,” he continued, “but these figures prove it is not.”

Thus, the only ersatz policy ever devised to prevent people and cyclists from injury and death on automobilised roads was the invocation of self-preservation. This included committing preschoolers, whose crime was to innocently play on calamitously speeded-up streets, to “the necessity of guarding against accidents by abstaining from contributory negligence,” as the Ontario Safety League put it.

For as long as we can remember we have looked both ways before crossing the road — this is the only policy in the municipal arsenal to prevent people from being hit by cars. It is offered with a predilection to blame non-automobilers for inattention to their own safety. 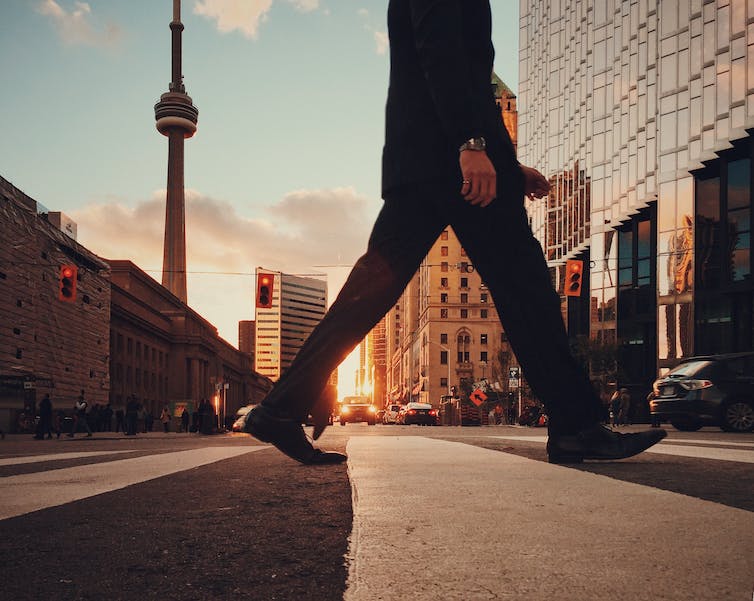 Pedestrians and cyclists know how to save lives in Toronto in 2018: ban automobiles from the places where we live. This cannot happen today for the same reasons it could not happen a century ago: automobiles matter more than pedestrians.

Thus, death and injury are ineluctable externalities of the car’s modern beneficence. Just as the City of Toronto wouldn’t enact policy to save the lives of the blameless and darling toddlers who fell by the hundreds a century ago, it will do nothing to protect adult bicyclists and pedestrians, regarded by many as urban pests.