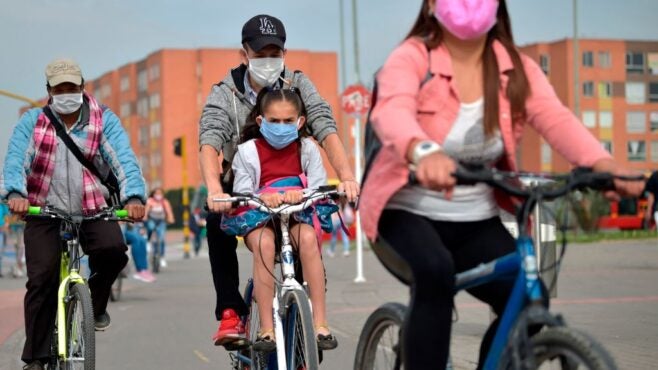 Cycling has long been popular in Bogotá, and ridership is up even more since the pandemic began. (Photo by Raul Arboleda/AFP via Getty Images)

Bogotá may be the capital of a cycling-obsessed country and have the most extensive network of bike lanes in Latin America, but its cycling officials have recently acknowledged an issue that hasn’t been remedied just by building more infrastructure: women aren’t riding as much as men.

Recreational cycling is championed in this city of about eight million residents. Biking regularly to work or school, however, can be decidedly less fun. Bogotá’s bike lanes may consist of fresh pavement or pure potholes, depending on the route, and some end when you least expect them to. The city is also finding that infrastructure is not the only reason why women account for only about 24% of the approximately 880,000 daily bike trips in Bogotá. Safety is also a big concern.

“Women are more at risk of being harassed in public spaces, and if they are on bikes, they have an additional risk,” says Blanca Durán, director of Bogotá’s recreation department, known as IDRD. The potential for robberies or assaults is also a problem on public transit, and Durán notes that women on bikes may feel additional pressure to cover up or stay alert to avoid unwanted touching. “That’s obviously one of the most uncomfortable things that can happen to you here on the street,” she says.

Bogotá bills itself as the bike capital of the world, and it certainly feels that way each Sunday morning, when the weekly tradition of the Ciclovía is in full swing. From 7am to 2pm, cyclists and joggers enjoy about 128km (80 miles) of car-free spaces amid a block-party-style atmosphere of street vendors. The city is still figuring out how to be bike-friendly after the party ends.

“Perhaps [women] ride bikes on Sundays during the Ciclovía, but for daily transportation, it has been more difficult,” Durán says.

In a series of investigations, women told the city’s recreation department that several factors play a role in their reluctance to rely on bikes for transportation. Some of these include a “constant” perception of insecurity, a lack of amenities such as bike parking and showers at work, concerns about finding places to fix bikes and insufficient knowledge about how to ride them. Bogotá hopes to increase the number of female cyclists through a variety of programmes seeking to improve safety, education and infrastructure.

One of the most comprehensive initiatives to increase female bikers is Al Trabajo en Bici (To Work by Bike), which the IDRD launched on 3 June. The first phase of the plan aims to provide safer spaces for women along a nearly 10km corridor transiting through mostly residential middle-class neighbourhoods before ending near El Dorado International Airport. Guides along the route – which includes a complicated construction zone – accompany cyclists between 6.30am and 6pm to provide real-time information about any possible unsafe situations. The department is also working to identify businesses that could be the “eyes and ears” of the bike route and help cyclists call for help or report incidents, Durán says. It is unclear whether the guides are monitoring the route every day during these hours; they were not obvious on a trip through a portion of the zone in late September.

The department picked this route because many women were already using it and the area had higher reported safety incidents than some other places in the city. The IDRD in February hopes to expand this concept to the busy Seventh Avenue bike lane, a main north-south artery that has been a nightmare for cyclists. The department is still analysing the best way to increase female riders using this corridor and is admittedly taking a bit of a trial-and-error approach. “We have not yet achieved increasing the number of women using this route,” Durán says. 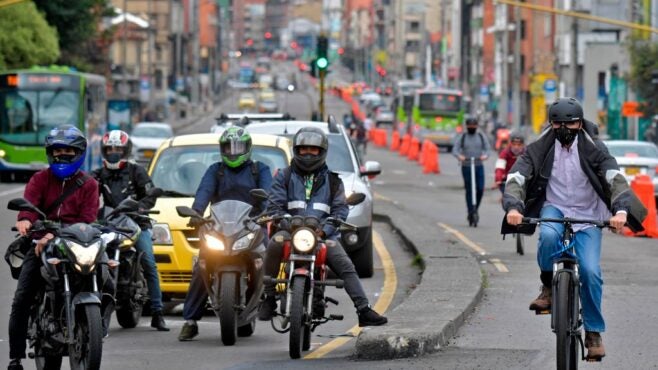 In the spring, Bogotá rushed to expand its bike lane network as a preventive measure against the spread of the novel coronavirus. (Photo by Raul Arboleda/AFP via Getty Images)

One of the biggest problems in Colombia’s capital is the perception of safety, and cyclists here face particular risks. Bike thefts have increased, and Bogotá’s safety secretary, Hugo Acero, recently told Caracol Radio that the problem profoundly affects women despite the fact that most victims are men. Many cyclists also worry about personal safety. A nurse named Yenny Cerquera was recently killed in Bosa, the area of Bogotá that Durán says has the most bike users. Meanwhile, femicides in Colombia increased during its five-month quarantine.

The city hopes to cut down on stolen bikes by doubling the number of places to park them in coming months, Mayor Claudia López (who is herself an avid cyclist) said during a 28 September panel in honour of Bogotá’s Bicycle Week. The city is also working to better connect bike lanes and display signage pointing to bike shops and other places of interest, as one of the most pressing safety concerns among women is breaking down en route and not knowing where to find a repair shop.

The question of how to keep communities safe has been contentious, especially since early September, when protesters burned down police stations in response to a video of officers shocking a man named Javier Ordóñez with a stun gun prior to his death. López mentioned during the panel that the city has 500 police officers patrolling the bike paths, and the city is also forming a citizen support network to rely on resources like neighbours, street vendors, bike-related groups and cameras to increase security.

Some women aren’t riding bikes because they never learned how, an issue that, according to Durán, stems from cultural attitudes about protecting young girls in the street. To remedy this, the city has set up “schools” in various public spaces that have taught nearly 34,000 residents how to ride, more than 75% of whom were women. Another major challenge, Durán says, is the cultural expectation that women should arrive at work looking polished, so the city is also encouraging businesses to add amenities such as lockers and showers, and plans to offer tax breaks to businesses that invest in new bike parking spots in the next four years.

The city’s notoriously long commutes and insufficient public-transit system also factor into women’s willingness to use bikes in the capital, the Bogotá-based sociologist and transportation expert Juana Afanador says. While bikes may cut down on journeys for some, others may find the distances too daunting or time-consuming.

“Imagine a woman with children who works – she already needs to get up early to get everything ready in the house and for her little ones, and then would need to ride a bike for an hour and a half or two hours to get to work,” Afanador says. Cycling could be more attractive for women, she says, if Bogotá had a transportation network that encouraged riders to combine bikes with trains or a metro system. While a metro is finally in the works, today’s buses, including the rapid TransMilenio busway network, are not bike-friendly (only foldable bikes are allowed, and they can be hard to bring on board during crowded, peak hours).

Women play a key role in Bogotá’s plan to increase cycling and ease congestion and air pollution. The city added more than 80km of temporary bike lanes to an existing 550km during the quarantine, which helped increase cycling as a percentage of total journeys from 6.6% before the pandemic to today’s 13%. One of the most noticeable new routes that popped up in lockdown is on Seventh Avenue. Daily trips on a key part of that route have already increased from fewer than 100 to more than 800.

In the four years prior to the pandemic, daily bike trips in Bogotá increased by nearly 40%, with the share of female riders increasing from about 21% in 2015 to 24% in 2019, according to a 2019 citywide mobility study. Luz Marina Ramírez, a former professional cyclist and pioneer of women’s cycling in Colombia, says that despite general safety concerns with bike lanes, such as potential robberies, she has noticed more women riding. “In these moments of the pandemic, we have gained a lot because the roads are full of cyclists,” she says.

Adding more bike lanes – even the 280km in additional lanes planned over the next four years – will not necessarily convince more women to use bikes. The city will also have to improve perceptions of safety and institutional support to mark meaningful increases. Durán says some of the hardest challenges are cultural: changing machismo tendencies and attitudes about the car being the ultimate symbol of progress in a city built for them.

Topics in this article: Covid-19, Megacities