Not all bike routes are equal. Some places that are marked as bike routes on a map feel precarious when traversed on two wheels, including shoulders covered in debris and places where you can feel the wind from speeding cars.

Despite this boost in biking infrastructure, a city’s website may not immediately reflect the changes or it may lack important information that can make cycling safer or more enjoyable.

Web-based maps that allow people to add information about bike routes give riders detailed data about the type of route, what it might feel like to ride there (do you have to ride close to cars?) and where it can take them (for example, shopping, work or school).

They can also tell us which cities are the most bike-friendly.

We set out to assemble a dataset of bike routes in Canadian cities using their open data websites. But we found it was nearly impossible to keep it up-to-date because cities are constantly changing and the data are shared using different standards. 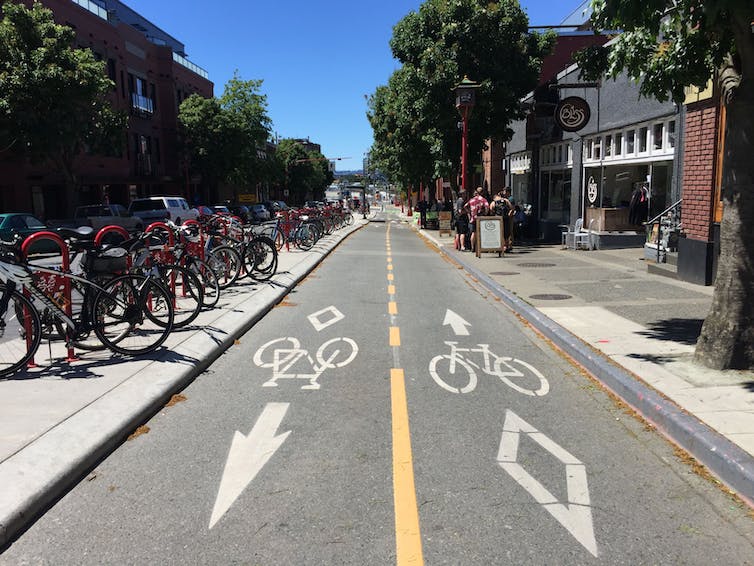 The solution was OpenStreetMap, which creates and distributes free geographic data. Anyone can add data or make edits to OpenStreetMap, whether they want to build a better bike map or make a navigation app.

We looked at OpenStreetMap data for three large cities (Vancouver, Toronto and Montréal) and three mid-sized cities (Victoria, Kelowna and Halifax) in Canada.

Not only did the data in OpenStreetMap agree reasonably well with the cities’ open data: in many cases it was more up-to-date. OpenStreetMap tended to include more local details such as where painted bike lanes ended and often marked the short cuts connecting suburban streets.

How did OpenStreetMap measure up?

Our analysis focused on how well different types of routes were mapped. We measured cycle tracks (which physically separate bikes from motorised traffic), on-street painted bike lanes (which use painted lines to separate bikes from motorised traffic), bike paths (which are located away from streets) and local street bikeways (which include traffic-calming features and where bicycling is encouraged).

Painted bike lanes are the most common type of route and also the most consistently well mapped. This makes sense, because the definition of a painted bike lane may be clearest across time and place. There is also a straightforward way for volunteers to tag it on OpenStreetMap.

But it was harder for us to distinguish cycle tracks from on-street painted lanes or paths (bicycle-only or multi-use) using OpenStreetMap. Local street bikeways were challenging to identify because of the wide range of ways cities design these kinds of routes along residential roads. Some use traffic-calming measures such as curb extensions, traffic islands, speed humps and raised traffic crossings to slow vehicle traffic and encourage safety, or greenery, reduced speed limits and bike-friendly markings on signs and the road surface.

Bicycle routes that are physically separated from motor vehicles and pedestrians, like cycle tracks and bicycle-only paths, have the greatest benefits for bicycling safety and encourage bike use.

Ease of access to bicycle routes is important to a city’s overall bicycle friendliness, but there are other important things to consider including the distance to destinations, the number, slope and length of hills, number of riders and how the transportation culture of a city can influence its safety.

Our results showed that Montréal has the greatest total distance in cycle tracks in Canada. As cities continue building more bicycle routes, researchers and planners can use OpenStreetMap to measure these changes on the ground.

The perfect bicycle map is up-to-date, covers the entire globe and gives riders an idea of the kinds of experiences to expect on different trails, roads and paths. People cycling in cities can contribute to the high-quality geographic data needed to understand changes in bicycle friendliness.

But OpenStreetMap is only as good as its contributions. The exciting thing is that anyone who wants a better bike map — city planners, researchers and everyday riders — can join the bike-mapping revolution by logging in to OpenStreetMap and mapping the features that are important to bicyclists.

This article is from the CityMetric archive: some formatting and images may not be present.
Topics in this article: Maps
Websites in our network