The UK will need to spend £1bn a year on flood management to avoid the worst consequences of climate change, according to the national Environment Agency. The organisation’s chair, Emma Boyd, said “we can’t win a war against water by building away climate change with infinitely high flood defences”, and warned that entire communities may need to change location due to flood risk.

More frequent extreme weather events – particularly flooding – are a hallmark of climate change. By their very nature, such events are unpredictable and can do substantial damage to communities. Significant floods occur in the UK every few years, so the way flooding is managed can have a major impact on how much damage is done, while poor strategic decisions such as building on historic flood plains can leave new communities vulnerable.

Coastal defences – including sea walls, buffer areas and evacuation plans – can help to protect towns and cities against flooding from storm surges. But inland flooding caused by excess rainwater requires more nuanced solutions. Humans have altered water courses such as rivers, streams and canals for centuries, and every change affects the way the ground responds to flooding. Today, artificial intelligence (AI) can use data to help make decisions about how water should flow in and around human settlements, to avoid the worst effects of flooding.

Introducing AI to the sewers

In cities, every drain is an opportunity to adjust the movement of water. At the University of Sheffield we worked with partners to create the CENTAUR system (Cost Effective Neural Technique to Alleviate Urban flood Risk), which uses AI to manage the flow of water in cities. The system works by installing “gates” in the sewer network that can control the flow of water from one part of the sewer network to another. Sensors are also added, to monitor water levels on either side of the gates.

The gates can be controlled remotely during extreme weather events, to prevent flooding in important areas. For example, if a part of the network starts flooding downstream, the system can detect rising water levels and close a gate upstream, to slow the flow of water or divert it into other parts of the sewer with spare capacity, and thereby prevent water from overflowing onto the street.

The “smart” bit, implemented by researchers at the university, was to create computer software that is capable of managing these systems independently of humans, and learning from its mistakes. The control system makes use of fuzzy logic – a way of interpreting uncertain conditions, such as the actual water level – and making decisions in those situations.

The CENTAUR system has proven successful in pilot installations in Coimbra, Portugal (2017) and Toulouse, France (2018). It has a relatively low cost, in the tens of thousands of euros, which means it can be easily incorporated into existing flood defence programmes. There are limitations though: if there is no spare capacity for water in a city’s sewers, then managing them with AI in this way would have very few benefits.

The limits of AI

The major issue when defending against floods is that water has to go somewhere. In small floods, water might be able to be diverted so that no area gets flooded. But during larger floods, the priority is not preventing flooding altogether, but managing which areas flood, and limiting the danger to people, property and key infrastructure.

Often, flood defence strategies divert flood water from urban areas into rural farmland and areas where fewer people live. To do this, water is either held upstream from urban areas by partially blocking rivers, or encouraged to move downstream more quickly by dredging or expanding rivers. 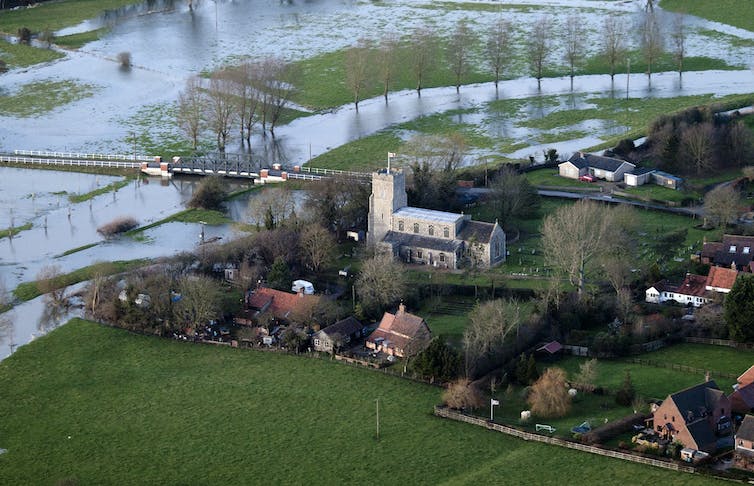 Some places may fare worse than others. Image: John D. Fielding/Flickr/creative commons.

While innovative flood management systems such as CENTAUR can help to protect people living in urban areas from flooding, the water has to be diverted. Decisions about which communities are offered greater protection from flooding, and which are left with limited defences, have the potential to set communities against one another. That’s why these higher level decisions cannot be left to AI.

Many different groups need to be involved in such decisions. Farmers might be in control of some drainage channels, water companies are generally responsible for the sewerage network, and environment agencies are responsible for river systems. Of course, the communities that are affected are also entitled to a say on it all. Local, regional and national governments must listen to and negotiate with all of these groups, to create a sound strategy for flood prevention.

These discussions have major implications, not just for the UK, but for the way nations deal with climate change around the world. The costs of stopping climate change will be very high for some countries – especially those which depend on coal for economic development, such as China. Yet for others – such as the Maldives, which is threatened by flooding from storms and rising sea levels – the cost of inaction will be far greater. Smart technology can help to mitigate the consequences of climate change, but it will take global action by world leaders to prevent it from reaching crisis point.

This article is from the CityMetric archive: some formatting and images may not be present.
Topics in this article : Natural disasters , Utilities