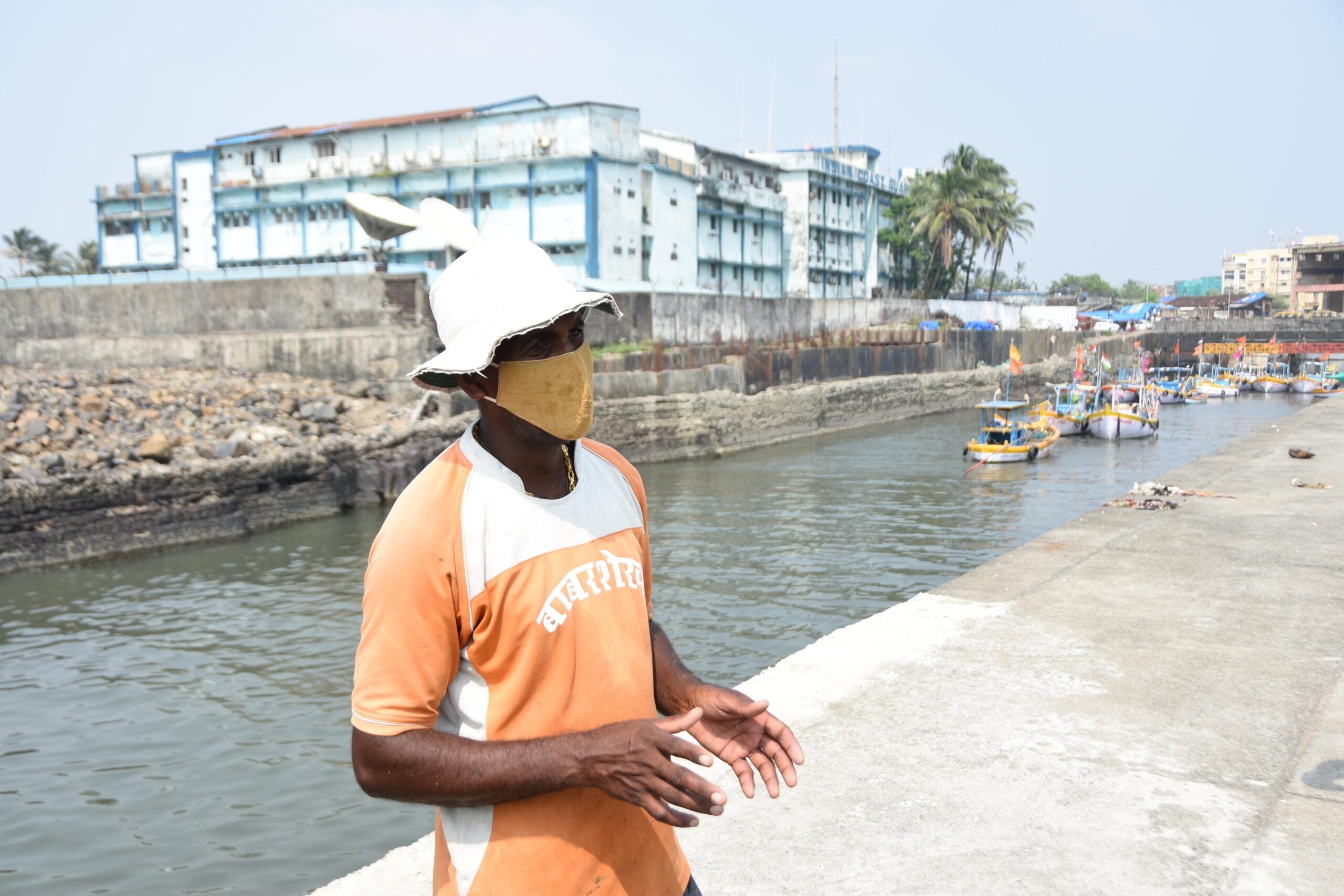 Nitesh Patil, a fisherman who fears that Mumbai’s latest infrastructure project, the eight-lane Coastal Road, will mean the end of his livelihood, looks out on the Arabian Sea. (Photo by Colin Daileda)

On a recent sweaty October Friday, Nitesh Patil was gesturing towards a swath of cobalt Arabian Sea that Mumbai’s government wants to transform into an eight-lane superhighway.

This body of water is slated to become part of an initial six-mile, $1.6bn portion of the 22-mile Coastal Road, which will run from Mumbai’s southern tip all the way to the city’s northern neighbourhoods. Dump trucks will grunt past the short inlet canal where Patil and other fishermen in Mumbai’s Worli area anchor their boats. They will then pour piles of dirt into the shallow water and on top of the coal-black rocks that line this side of the city, paving over wetlands and greenery. New development will bury stony coral, rock oysters, Asian green mussels, octopuses, golden snappers, clapping crabs and other sea creatures that live there and provide the fishermen with a livelihood. The new land will be turned into parks, cycling tracks, jogging paths and open-air theatres that sprawl alongside the fresh asphalt. Water will retreat, and ostensibly, Mumbai’s mind-numbing traffic congestion will be alleviated.

At least that’s the city and state governments’ plan. But reduced traffic may come at the cost of fishing communities while also exacerbating the heatwaves and catastrophic floods that are already becoming more common due to climate change.

The Coastal Road project has moved forward despite persistent opposition from local fishermen and a cohort of environmental organisations and activists.

Patil, who represents the Worli Koliwada Nakhwa Matsya Vyavsay Sahakari Society, a group that advocates for Worli’s fisherfolk, says he wasn’t consulted about the highway project. Nor was anyone in the fishing community, including Nandakumar Pawar, who stood next to Patil that afternoon and has filed a petition in court to try to stop some of the construction. India’s Supreme Court hasn’t decided whether to sanction the full project, yet it has allowed road construction to go ahead while the fishermen wait for a ruling. 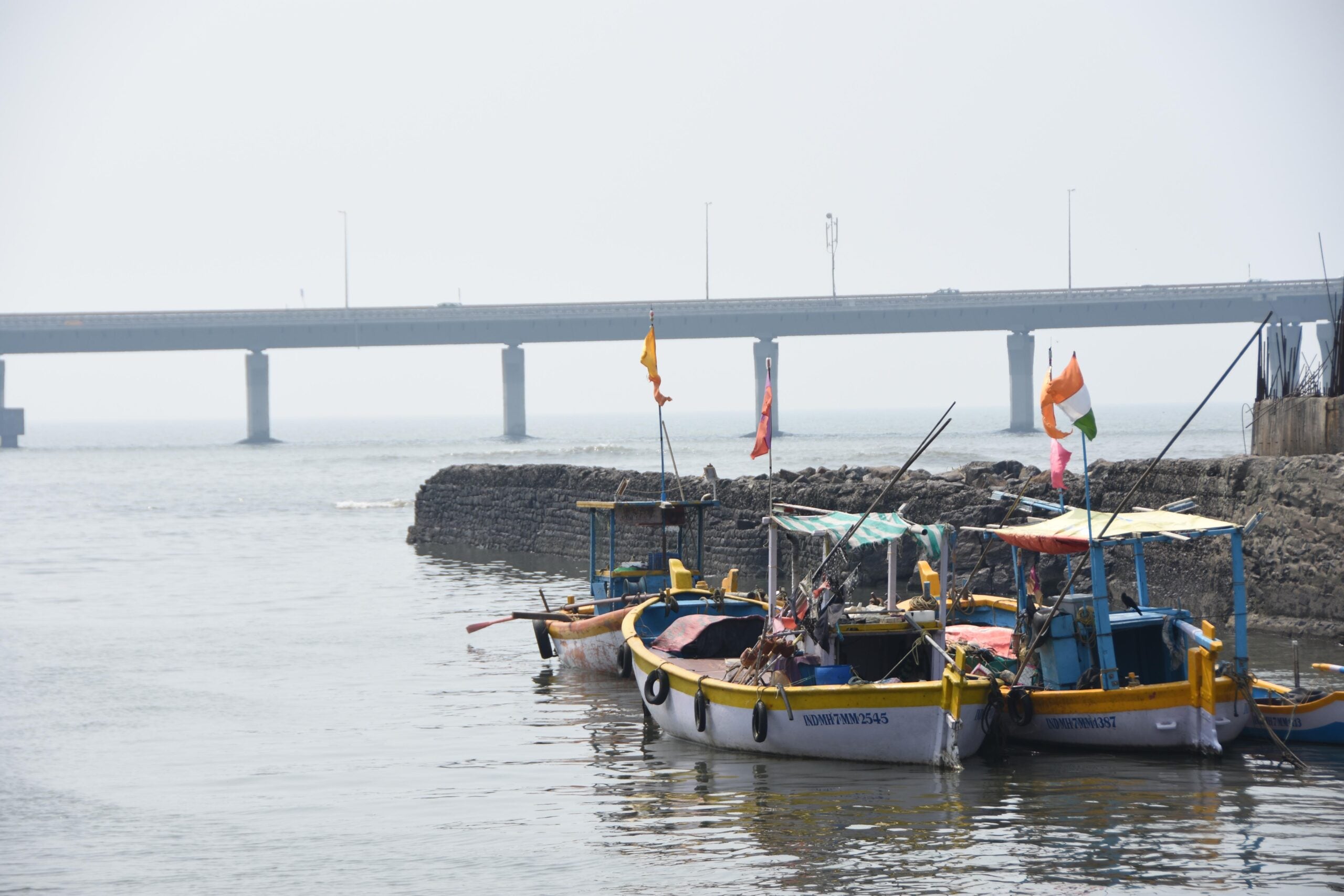 Fishing boats bob in a Worli canal as cars drive across the Bandra-Worli Sea Link. (Photo by Colin Daileda)

Cranes and drills are already spreading up towards Worli from the stretch of seaside known as the Queen’s Necklace for the way orbs of light curl around the coastline near Mumbai’s southern tip. That part of town is just 20 minutes away by car, and though it’s not clear when the government will tell Patil and the other fishermen that the right to their land no longer applies, there’s a sense that it won’t be long.

A question of survival

The Coastal Road now has the inevitable feel of a massive development project that – along with revamping Mumbai’s eastern shore and building the country’s longest sea bridge, among other endeavours – the government believes will launch the city into a glitzy new era. It has been clear that it wants to take land from the sea even though doing so would have an immense environmental impact and potentially erase Mumbai’s urban fishing communities. Patil and Pawar refuse to believe that the government’s plans are inevitable, because for them, the project is a path to permanent estrangement from their land and history.

On the other side of Mumbai, in a small but airy space, Stalin Dayanand leads a non-profit called Vanashakti, part of a coalition challenging the legality of the Coastal Road on the grounds that the city never considered how construction would wreck the environment. Most of Vanashakti’s employees have stayed home since the pandemic began, and so on that same Friday afternoon, Dayanand sat by himself at his glass desk, the windows open and a fan chopping the air from above.

In 2012, Dayanand asked the city to build the Coastal Road on stilts to avoid encasing the shore in asphalt. That might have happened before a different infrastructure project – metro train construction – left Mumbai with a sudden surplus of dirt that the government could plop into the Arabian Sea. The Municipal Corporation of Greater Mumbai, a government organisation, started dumping even as environmental groups were protesting their right to do so in court.

Vanashakti demanded that the corporation at least save the legally protected corals found across Mumbai’s coast, something the government agreed to do after several rounds of denying their existence. But Dayanand questions whether transplanting corals is even possible.

“The [government] has zero experience in relocating corals,” he says. “How can you move them out of a habitat where they’ve formed maybe over the last 100 years or so and say, ‘OK, now this is your new home?’”

Vijay Nighot, the chief engineer of the Coastal Road project, says the municipal corporation has yet to finalise its plan to find the corals a different spot.

Even if corals and other species are spared, Dayanand says the government has already “put the city in a position from where it will not recover”. Though construction is nowhere near complete, it may have already had a hand in causing unprecedented amounts of flooding.

Much of Mumbai floods during monsoon season, but the south had largely kept dry until a August downpour this past August turned it into a swimming pool. More rain fell on that part of the city in a 24-hour period than all but one time since 1974. It’s the kind of deluge that climate change has made more common across India. The torrent swamped the city’s new chunk of impermeable shoreline, and that man-made land also left the sea with less room to roam at high tide. The water had nowhere to go.

The government pinned this on freak weather and faulty storm water drains, but Dayanand believes it is conveniently ignoring the damage its roadwork has done. He thinks the Coastal Road is part of its long-term plan to build Mumbai out into the Arabian Sea, even though sea level rise threatens to swallow an enormous amount of the city as early as 2050. Developers could put up skyscrapers full of pricey apartments so long as people looking for a home on Mumbai’s new frontier aren’t put off by constant flooding caused in part by the ground they want to live on. Dayanand’s theory falls in line with the history of the city, which was an archipelago until the English transformed its water into property centuries ago, from 1710 to 1728.

The Bandra-Worli Sea Link is a bridge that spools across Mahim Bay, another grand road that was supposedly built to ease Mumbai’s crush of cars. But as Pawar looked across the water from the Worli shore that Friday, the bridge was nearly empty.

Though a larger percentage of Mumbaikars now use private vehicles than at the turn of the century, the vast majority still get around on public transit. Given the numbers, Pawar – the fishermen’s representative – sees the Coastal Road as the government catering to wealthier car owners at the expense of people who have spent more time on Mumbai’s waters than its streets.

Officials have suggested that Patil and other fishermen should turn to deep-sea fishing, but they don’t have the equipment. They’ve never needed it. Worli’s coast has washed up enough fare that the fishing communities have lived off it and near-shore parts of the Arabian Sea for generations. Asking them to change how they fish is asking them to do an entirely different job, one that requires different skills and money to upgrade their boats, nets and storage. They say the government hasn’t offered any assistance in this regard.

For now, the city plans to nominate two fishermen to a committee that will “collect data” to “see how they are affected”, says Nighot, the Coastal Road engineer. But when asked, he isn’t specific about the kind of compensation they’d get. Whatever it is, he says it would dissuade the fishermen from protesting, though they’ve been doing that for years. Patil says Worli’s fishing community is ready to oppose any area construction en masse.

Just a short drive south, two workers were dipping paintbrushes into buckets of sunset-yellow pigment, slathering a wall the corporation has put up along much of Mumbai’s southern coast. It blocked the shore from view like a new border, as though whatever was beyond it had never been a part of the city before.

Colin Daileda is a Bengaluru-based freelance journalist whose work has appeared in Longreads, the Atlantic, Atlas Obscura and other publications.

Topics in this article: Congestion, Megacities

Colin Daileda is a Bengaluru-based freelance journalist whose work has appeared in Longreads, The Atlantic, Atlas Obscura, and other publications.
Websites in our network