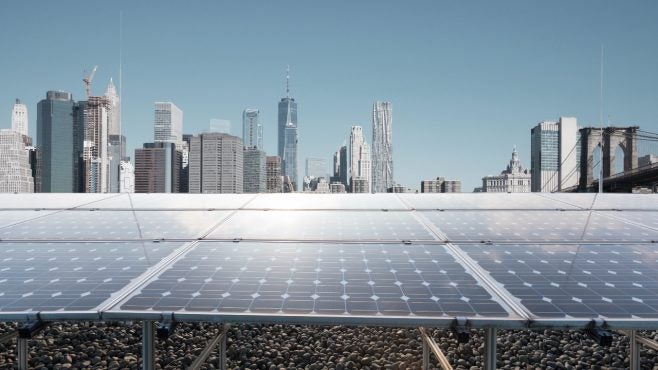 Solar panels against the NYC skyline. (Photo by Zhu Difeng/Shutterstock)

President Biden wants to achieve net-zero emissions in the US by 2050. Three decades sounds like a long time – until you grasp the scale of the challenge before him. The to-do list includes reducing CO2 emissions from around 140 million residential units and six million commercial buildings.

Buildings account for nearly 40% of US energy consumption and the same share of CO2 emissions. Biden proposes a two-pronged strategy to slash emissions from the sector. One, decarbonise the electricity delivered to homes and businesses, which he aims to do by 2035. Two, retrofit millions of buildings each year with electric heat pumps and other energy-efficient equipment. Biden also wants Congress to establish a 2030 net-zero emissions standard for new commercial buildings. The ultimate goal is to reduce the carbon footprint of the nation’s buildings by 50% by 2035.

Biden can propose such ambitious goals thanks in part to investments made when he was vice-president. Billions of federal dollars in the US’s 2009 stimulus package went to large-scale renewable energy projects that helped transform the market. Utility-scale onshore wind is the cheapest source of new electricity in the US, with solar not far behind. By the end of 2020, 40% of US power was carbon-free.

The increasingly abundant and affordable carbon-free electricity makes it possible for the Biden administration to clean up the power grid and buildings at the same time.

Decarbonising US buildings is a challenge commensurate with Joe Biden’s all-of-government commitment to climate action. Biden has assembled an accomplished climate and energy team and stocked federal agencies with a legion of climate policy wonks. Achieving carbon-free buildings will call on those experts to come up with solutions suited to tens of millions of private homes and businesses, as well as the federal government’s own vast real estate holdings.

Mobilising the US government

Biden has wasted no time getting started. He signed an executive order on his first day in office directing agencies to propose changes to existing appliance and building-efficiency standards by June 2021. Last month, the Department of Energy (DOE) sent the White House a list of 13 proposed rule changes for products ranging from water heaters and furnaces to light bulbs and showerheads.

Former President Donald Trump regularly railed against low-flow showerheads and toilets at his political rallies. The message was received by the political leadership at the DOE, who delayed or weakened dozens of efficiency standards over the past four years.

One week into the job, Biden signed an executive order directing each federal agency to prepare action plans within 120 days aimed at “using the power of procurement to increase the energy and water efficiency of US government installations, buildings and facilities and ensure they are climate-ready”.

The federal government is the US’s largest energy consumer. Its real estate portfolio includes more than 350,000 buildings – a vast canvas to trial carbon-free technologies before commercial deployment in private homes and businesses.

“There are a lot of federal buildings, perfect to showcase pollution and financial savings associated with making them all-electric,” says Bruce Nilles, executive director of Climate Imperative, a project based at Energy Innovation, a California-based research company.

The DOE’s Federal Energy Management Program could be empowered to significantly ramp up its work assisting agencies in reducing the energy consumption of their buildings. It offers advice on how to execute energy savings performance contracts, agreements under which energy service companies shoulder the upfront cost of energy-saving upgrades in return for a share of future cost savings.

Biden’s menu of options only grows from there. “There is a ton Biden can do,” says Nilles. “It is a great example of ‘all of government opportunity’, and done right offers huge job and equity benefits.”

“Advocacy at the local level in terms of better technical support is something the DOE does and has been doing but could certainly do more of,” says Lauren Urbanek from the Natural Resources Defense Council (NRDC), a New York-based non-profit organisation. “Especially if they had more of a budget in terms of training and ensuring officials understand, and can adopt and enforce, the most recent building codes.”

There is an increasing awareness at the federal government, and really nationwide, that gas appliances don’t just release greenhouse gases. Denise Grab, RMI

The White House will push the DOE to strengthen the deficient appliance standards promulgated by the Trump administration and clear a backlog of overdue standards.

“Catching up on overdue deadlines for updating standards and meeting upcoming ones is an even bigger challenge,” writes Andrew deLaski, executive director of the non-profit Appliance Standards Awareness Project.

The Trump administration did not just weaken appliance standards, it also ignored statutory deadlines. The DOE is required to review every national appliance standard every six years, but as of Joe Biden’s inauguration, the DOE had missed 28 legal deadlines for considering new standards, says deLaski. “By January 2025, another 19 will be due.”

Updating the standards for 47 products could reduce cumulative CO2 emissions through 2050 by up to 2.9 billion metric tonnes, depending on how quickly the power sector decarbonises, finds a report prepared by deLaski’s team.

The Energy Department could set standards to favour high-efficiency electric appliances like heat pumps over fossil fuel alternatives. Such action could increase the energy efficiency of heating by 300% or more, says Nilles.

The DOE’s Weatherization Assistance Program, for instance, funds whole-house retrofits to reduce energy expenditures for low-income families. These households typically spend 14% of their total income on energy bills, compared with just 3% for higher-income households, says the DOE. The programme serves about 35,000 households each year while nearly 40 million are eligible, says Urbanek.

“You are talking about a gigantic waiting list,” she says. “That needs additional funding. With some tweaks, it can be expanded to focus on electrification and get fossil gas appliances out of the home, especially if they are being replaced anyway.”

During the presidential campaign, Biden pledged to weatherise two million homes over four years. “It is significant, but it doesn’t even get close to where we eventually need to be,” says Urbanek.

In a November 2020 letter to Biden, the NRDC and two dozen other organisations urged the incoming administration to direct the DOE to strengthen the energy efficiency standard for manufactured homes. The standard for these factory-built homes, which tend to be occupied by low-income families or senior citizens on fixed incomes, has not been updated since 1994.

Not just about CO2

“The other critical player is the EPA [Environmental Protection Agency],” says Climate Imperative’s Nilles. “Gas appliances are a massive source of local air pollution. In California, gas appliances emit more NOx [nitrogen oxides] than cars and SUVs and we have the dirtiest air in the country.”

“The EPA has never set emission standards for [fossil-fuel burning] water heaters and furnaces,” he says. “A handful of states, including California, Texas and Utah, have modest standards, but the EPA can and should, just like with cars and trucks, be driving the market to zero emissions.”

There are a lot of federal buildings, perfect to showcase pollution and financial savings associated with making them all-electric. Bruce Nilles, Climate Imperative

“There is an increasing awareness at the federal government, and really nationwide, that gas appliances don’t just release greenhouse gases,” adds Denise Grab, a manager on RMI’s carbon-free buildings team. “NOx, when released indoors, such as from stoves, can cause and exacerbate asthma, especially in children. There is a 42% increased risk of asthma symptoms for children living in a home with a gas stove.”

The EPA has regulated wood stoves and backup diesel generators under the Clean Air Act, meaning there is a precedent of the agency regulating household appliances. “But the EPA has not as of yet issued gas appliance standards,” Grab adds.

An assist from Congress

The legislation provides $8bn in rebates for home retrofits and $17.5bn for the Energy Efficiency and Conservation Block Grant Program, a DOE programme launched in the 2009 stimulus that provides energy efficiency grants to cities, states and Indian tribes. Federal rebates would also be available for more efficient electric appliances that replace existing equipment. With Democrats in control of the US Senate, at least some of the provisions in the CLEAN Future Act are likely to be incorporated into the green infrastructure package congressional Democrats will attempt to pass this spring. Biden will unveil the White House’s vision for a multi-trillion-dollar infrastructure plan in Pittsburgh on 31 March.

Federal lawmakers could also look to states for inspiration. California State Senator Dave Cortese recently introduced a package of three bills focused on building decarbonisation. One, SB 30, would prohibit state agencies from constructing a new state building with a natural (fossil) gas connection from 2022 and require all state-owned buildings to be carbon neutral by 2035. In parallel, a climate policy package released by Washington Governor Jay Inslee in December 2020 included a proposal to require new buildings to be carbon-free by 2030 and for the existing building to be fossil fuel-free by 2050.

The message from these forward-leaning states is clear. In the long run, a more efficient appliance is not the answer if it is still burning fossil gas. “Putting in a less-polluting alternative doesn’t solve the problem,” says RMI’s Grab. “It just kicks the grenade further down the road.”

Topics in this article : Skyscrapers