A massive redevelopment of the old Royal Albert Dock in East London is transforming the derelict waterfront to a gleaming business district. The project, which started in June 2017, will create 325,000m² of prime office space – a “city within a city”, as it has been dubbed – for Asian finance and tech firms. Then, in 2018, authorities in Kampala, Uganda celebrated as a ferry on Lake Victoria was unloaded with goods from the Indian Ocean, onto a rail service into the city. This transport hub was the final part of the Central Corridor project, aimed at connecting landlocked Uganda to Dar es Salaam and the Indian Ocean.

Both of these huge projects are part of the $1trn global infrastructure investment that is China’s Belt and Road Initiative (BRI). China’s ambition to reshape the world economy has sparked massive infrastructure projects spanning all the way from Western Europe to East Africa and beyond. The nation is engaging in what we, in our research, call “Silk Road urbanism” – reimagining the historic transcontinental trade route as a global project, to bring the cities of South Asia, East Africa, Europe and South America into the orbit of the Chinese economy.

By forging infrastructure within and between key cities, China is changing the everyday lives of millions across the world. The initiative has kicked off a new development race between the US and China, to connect the planet by financing large-scale infrastructure projects.

Amid this geopolitical competition, Silk Road urbanism will exert significant influence over how cities develop into the 21st century. As the transcontinental trade established by the ancient Silk Road once led to the rise of cities such as Herat (in modern-day Afghanistan) and Samarkand (Uzbekistan), so the BRI will bring new investment, technology, infrastructure and trade relations to certain cities around the globe.

The BRI is still in its early stages – and much remains to be understood about the impact it will have on the urban landscape. What is known, however, is that the project will transform the world system of cities on a scale not witnessed since the end of the Cold War.

Silk Road urbanism is highly selective in its deployment across urban space. It prioritises the far over the near and is orientated toward global trade and the connections and circulations of finance, materials, goods and knowledge. Because of this, the BRI should not only be considered in terms of its investment in infrastructure.

It will also have significance for city dwellers – and urban authorities must recognise the challenges of the BRI and navigate the need to secure investment for infrastructure while ensuring that citizens maintain their right to the city, and their power to shape their own future.

Developments in both London and Kampala highlight these challenges. In London, Chinese developer Advanced Business Park is rebuilding Royal Albert Dock – now named the Asian Business Port – on a site it acquired for £1bn in 2013 in a much-criticised deal by former London mayor Boris Johnson. The development is projected to be worth £6bn to the city’s economy by completion.

But the development stands in sharp contrast with the surrounding East London communities, which still suffer poverty and deprivation. The challenge will be for authorities and developers to establish trusting relations through open dialogue with locals, in a context where large urban redevelopments such as the 2012 Olympic Park have historically brought few benefits.

The creation of a third financial district, alongside Canary Wharf and the City of London, may benefit the economy. But it remains to be seen if this project will provide opportunities for, and investment in, the surrounding neighbourhoods.

The Ugandan capital Kampala is part of the Central Corridor project to improve transport and infrastructure links across five countries including Burundi, the Democratic Republic of the Congo (DRC), Rwanda, Tanzania and Uganda. The project is financed through the government of Tanzania via a $7.6bn loan from the Chinese bank Exim. 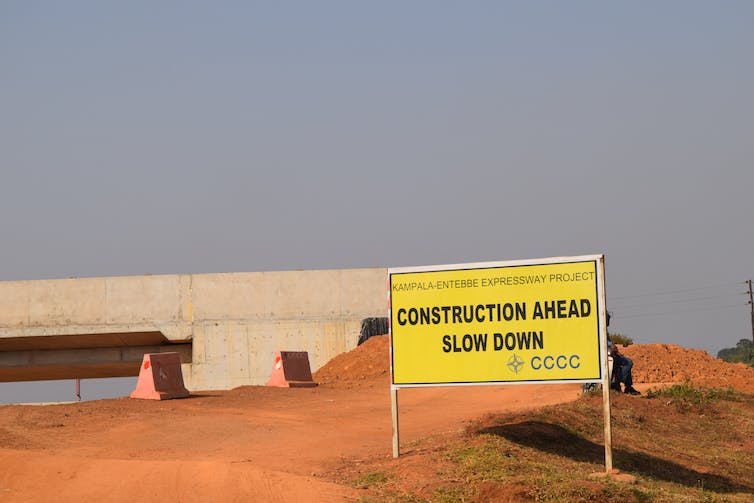 The growth of the new transport and cargo hub at Port Bell, on the outskirts of Kampala, with standardised technologies and facilities for international trade, is the crucial underlying component for Uganda’s Vision2040.

During fieldwork for our ongoing research into Silk Road urbanism in 2017, we witnessed the demolition of hundreds of informal homes and businesses in the popular Namuwongo district, as a zone was cleared 30 metres either side of a rehabilitated railway track for the Central Corridor required.

As Silk Road urbanism proceeds to reshape global infrastructure and city spaces, existing populations will experience displacement in ways that are likely to reinforce existing inequalities. It is vital people are given democratic involvement in shaping the outcomes.

This article is from the CityMetric archive: some formatting and images may not be present.
Topics in this article : Inequality
Websites in our network