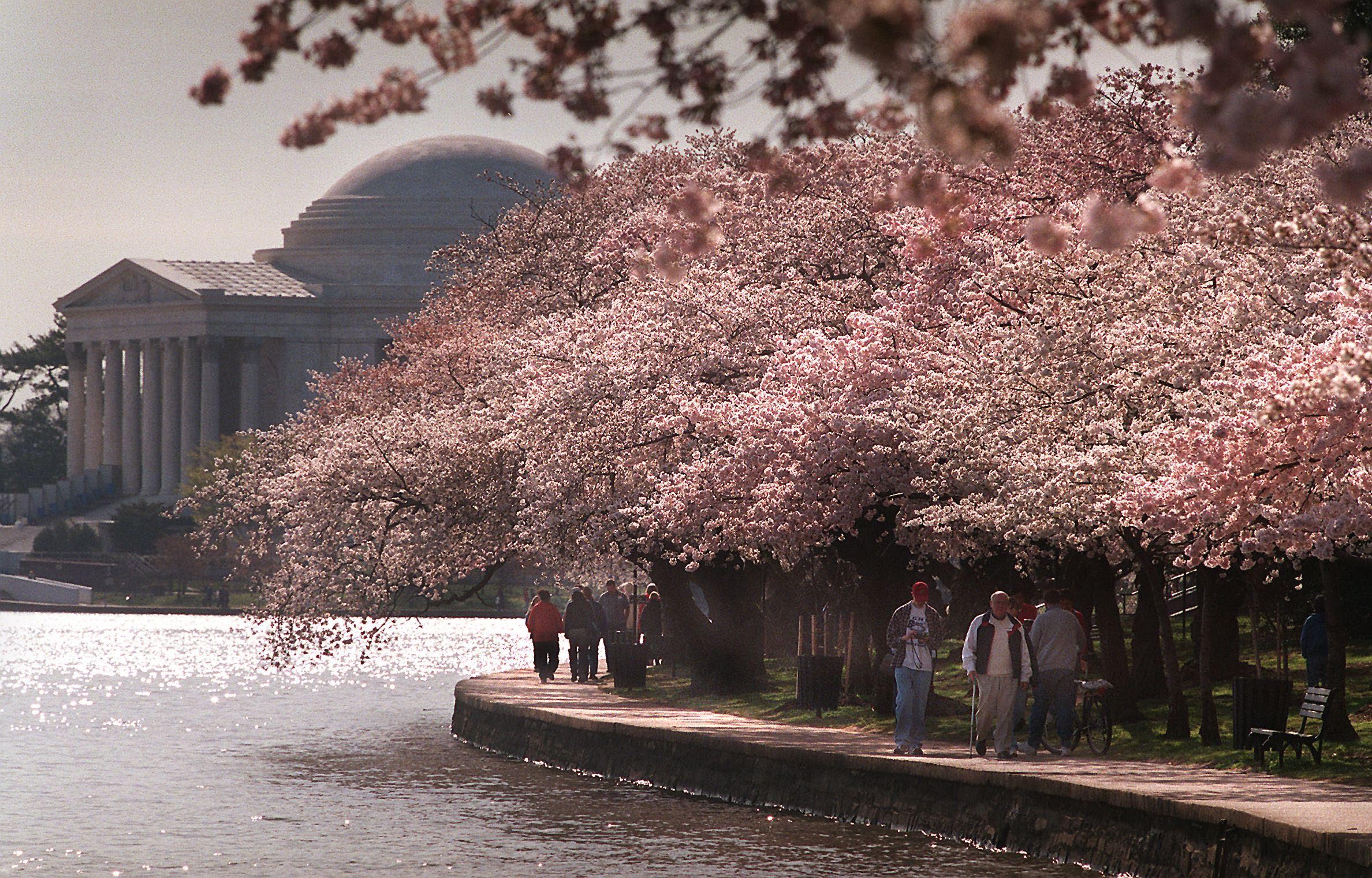 Sightseers walk around the Tidal Basin in Washington, DC under blooming cherry trees. (Photo by Tim Sloan/AFP via Getty Images)

In February 1881, the Potomac River flooded parts of the National Mall in Washington, DC and much of the southern part of the city was accessible only by boat. In the following years, the Army Corps of Engineers dredged the Potomac River, using sediment from the Washington Channel shipping canal to fill in the swamp. The National Mall and the Lincoln, Jefferson, Vietnam and Martin Luther King Jr memorials were all built on that land – and a new pond (now known as the Tidal Basin) was created to prevent the flood from occurring again. Some 140 years later, the flood risk remains – and the Tidal Basin is up against the (sea)wall.

Located south of the National Mall, the Tidal Basin is a 107-acre national landmark surrounded by a parade of presidential monuments and a ring of cherry trees. Today, daily flooding and crumbling infrastructure threaten the mall’s role as a scenic, recreational and symbolic landscape. By 2040, for example, the Jefferson Memorial is projected to be submerged daily in 4ft of water; by 2100, it will likely stand in 9ft of water under the same conditions. The 2,000 cherry trees planted in 1912 by then First Lady Helen Herron Taft along the Potomac waterfront – a gift from Mayor Ozaki of Tokyo to reflect the growing friendship between the US and Japan – now stand daily in 3ft of water at high tide, their roots rotting. But none of these challenges are visible to the naked eye. “I don’t think the American public realises the significant and interlocking threats to the Tidal Basin,” says Katherine Malone-Frances, chief preservation officer at the National Trust for Historic Preservation.

The Tidal Basin Ideas Lab emerged in response to this impending catastrophe. Launched in late October by The National Trust for Historic Preservation, the National Park Service and the Trust for the National Mall, the exhibition aims to raise awareness of the challenges facing the basin, and proposes new ways of thinking about ecology, social spaces, narratives and experience, all at the foot of the US’s front yard. Five landscape architects – DLANDstudio, GGN, Hood Design Studio, James Corner Field Operations and Reed Hilderbrand – recently presented proposals exploring how to both preserve and transform the public space for the future. Originally meant as an exhibit at the Smithsonian National History Museum, they are now exhibited online.

The Ideas Lab is an urgent call to action. It invites the public to explore the histories and challenges of the Tidal Basin and share feedback on its evolution, which varies according to the architects’ proposals. James Corner Field Operations, for example, has designed three distinct scenarios to mitigate rising water levels: an earthwork levee that protects the site, a series of islands that function as gardens and protect the monuments, and an entropic solution that embraces the inevitability of flooding. The latter favours impermanence by transforming the Tidal Basin into wetlands where decaying ruins of former monuments can be observed via an elevated public walkway. “As with Lars von Trier’s 2011 movie Melancholia, one can either deny reality with brazen and unchanging pride, or accept natural time for what it is, with humility and respect,” says James Corner. “The end game can be seen as embracing the temporality of nature and change instead of fixing on stasis and permanence.” 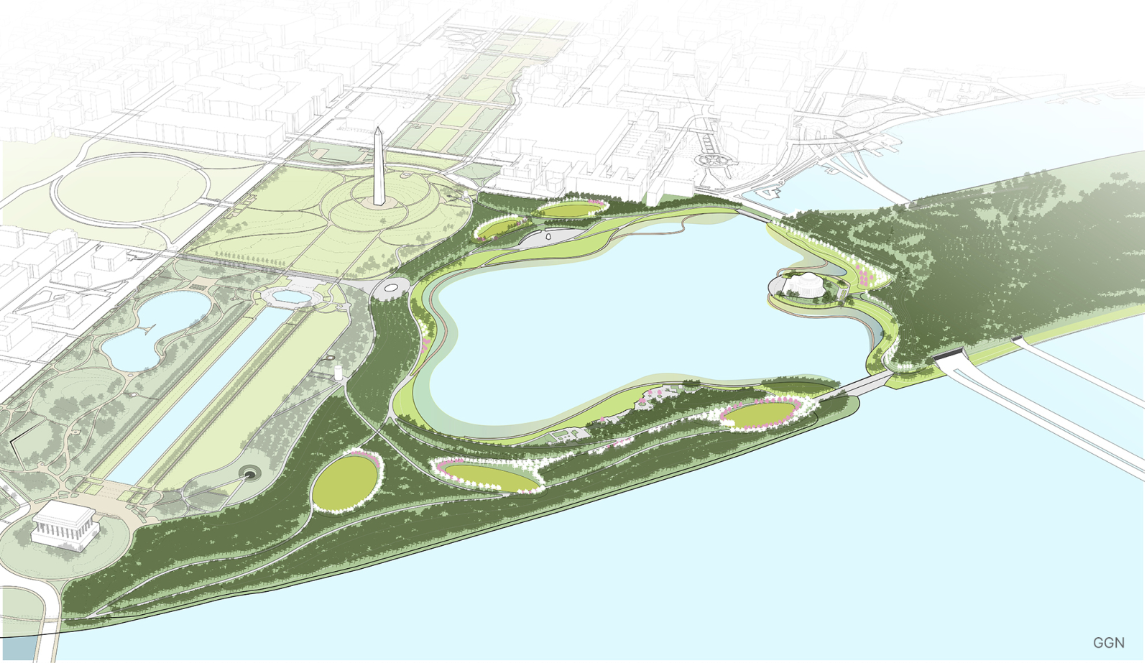 GGN proposes changes at the Tidal Basin that would better integrate it with the National Mall and the city. (Rendering courtesy of GGN)

In the same vein, GGN has envisioned a sequence of gradual changes that will allow the site to adapt to the environmental challenges of the future and bring about a new cultural aesthetic, where monuments will be adapted, protected or relocated while preserving the importance of this shared space. DLANDstudio has proposed extending the National Mall via a jetty to the west of the Lincoln Memorial, and to relocate the Martin Luther King Jr Memorial upon this newly filled land. Reed Hilderbrand has revived the 1902 McMillan Plan – which envisioned a diverse, connective, and cooling regional park system – reframing the Tidal Basin as part of a vast system of parks and green spaces dubbed “Washington Commons”. 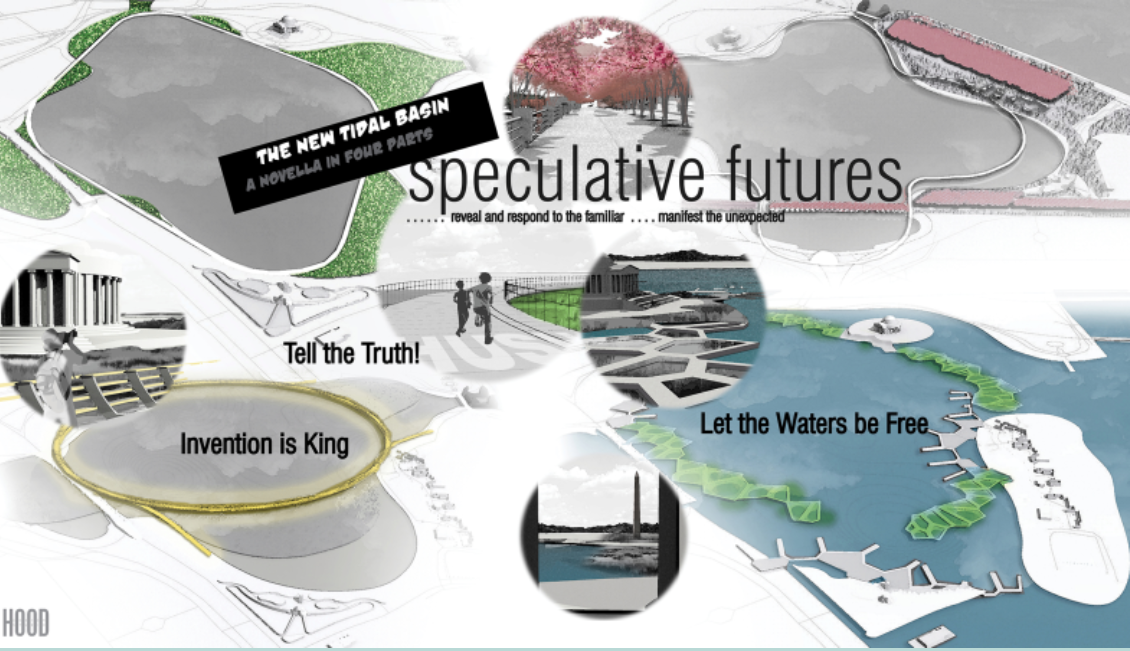 Hood Design Studio has taken a more socio-historic approach to the site’s challenges. Building on the Tidal Basin’s cultural history as “hush harbours”, where enslaved people congregated and practiced religion in secret, the studio proposes a new, elevated walkway surrounding the Basin. Seen as an educational instrument rather than a romanticised bridge, the walkway would teach visitors about the landscape’s lost narratives and cultural histories.

Together, the five studios have charted courses of action to be realised over the coming century, but “the time to begin this process is now”, the architects said in a collective statement.

Unlike a design competition, the exhibition format promotes an exchange of ideas between designers, stakeholders, and the public. “It’s such a complicated place that we needed that dialogue between the best minds we could bring,” says Tereza Durkin, executive vice president at the Trust for the National Mall. Ultimately, the National Park Service will initiate an environmental review and a masterplan for the site. This will be supplemented with concepts born out of the Ideas Lab, and it will consider visitor experience, circulation, ecology, but also connections to the rest of the National Mall.

More than 36 million people flock to the park every year, and yet, the National Mall is suffering from two decades of deferred maintenance that now amounts to $800m in costs – and declining infrastructure all around. “When you’ve got a landscape built in 1880s like the Tidal Basin, and you’ve had the population double since the 1950s, you’re simply not prepared for the sheer number of people that are coming,” says Durkin.

Since its founding in 2007, the trust has leveraged millions of federal dollars for restoration projects on the National Mall, including the Lincoln Memorial reflecting pool, the District of Columbia War Memorial, the 17th Street Levee that protects the White House against rising waters, the Jefferson Memorial Seawall, and the National Mall’s turf, which had fallen victim to its own popularity. Starting 2010, HOK Architects began an ecological restoration of the mall’s turf, which had been reduced to a patchwork of weeds, dirt and turf the density of cinder block. The soil was redesigned to perform more like a resilient sports field, with a smart irrigation system that captures rainfall into four 250,000gal cisterns, reducing the amount of potable water needed to irrigate the mall by 75%.

“The National Mall struggles the most with deferred maintenance because it’s 100% urban. Every inch of this place needs to be maintained every single day,” says Durkin, citing issues like subsidence and flooding, which can be seen as a microcosm of the broader impact of climate change on our cities.

How we preserve the Tidal Basin can provide a model for other seaboard cities that face the challenges of climate change. According to the National Trust’s Malone-Frances, the key lies in preserving the landscape’s character while building a stronger foundation for change. “That’s the power of preservation: writing new stories while continuing to tell stories from the past. Powerful places, they hold their stories until we’re ready to tell them.”

Elissaveta M Brandon is a Brooklyn-based writer whose work has appeared in publications including Metropolis, Curbed and Architectural Digest.