The year 2020 was, by common consensus, straight out of a disaster movie – and it started on a suitably apocalyptic note. The south-east Australian bush was on fire, forcing thousands of people to flee and sending plumes of yellow smoke as far afield as New Zealand.

During what became known as ‘Black Summer’, the inferno ripped through 2.4 million hectares of woodland. At least 34 people lost their lives, more than 3,000 homes were destroyed, and three billion animals were killed or displaced.

The 2019–20 bushfire season, the worst on record, followed on from an exceptionally hot and dry year. In effect, the bush had become a tinderbox. It also set a ‘hazard cascade’ in motion.

Air pollution levels soared, and as rain finally fell on the charred landscape, the soil erosion led to polluted drinking water and floods.

It was a tragic start to the decade, but sadly it was no anomaly. Along with the Australian bushfires, wildfires are now a staple part of life on the American Pacific Coast. There have been floods, typhoons and hurricanes. This summer, Pakistan reached temperatures ‘hotter than the human body can handle’, while a ‘heat dome’ lurked ominously over Canada, killing around one billion marine animals in an ecosystem unused to 40ºC heat.

All the evidence suggests that extreme climate events are here to stay – and despite our fastidious attempts to cut waste and offset carbon. In this context, there is something feeble around the now ubiquitous ‘net zero’ rhetoric, in which corporates pledge to cut carbon emissions with a view to staving off a future crisis. By many measures, that crisis point has already arrived.

An eye on the clock

From an architectural standpoint, this poses some serious questions. Sustainable building practices are all well and good – but what about if disaster can’t be averted? Can the built environment go further than cutting emissions, and actually protect humans from the flooding, fires and heatwaves that have become a fact of life?

Dr Ian Weir, a research architect specialising in bushfire-resilient architecture, has been pondering these questions for some time.

“As far as I know, I’m the only architect in Australia that does exclusively bushfire-resilient housing, and I’ve been working on that for about 25 years,” he says. “I’m now 57, and as an architect, I feel like I’m only just getting started.”

Weir grew up on the south coast of Western Australia, in one of the most botanically diverse corners of the planet. He was both fascinated and repelled by the land-clearing practices that took place there, in which acres of trees and shrubs were burned down to make space for farms.

As far as I know, I’m the only architect in Australia that does exclusively bushfire-resilient housing. I’m now 57, and as an architect, I feel like I’m only just getting started. Dr Ian Weir, research architect

“I saw it cleared before my eyes in a really devastating fashion,” he recalls. “There was a certain excitement around the huge bulldozers and the massive fires, but at the same time, I had this innate sense that it was just extremely brutal. We really felt the effects of the land clearing not so long after, when we had droughts and floods.”

As is now well documented, land clearing has significantly altered the regional climate patterns, not least by reducing rainfall. This contributes to the drought conditions that exacerbate bushfires, creating a continental climate crisis on top of the global one.

Nonetheless, land-clearing practices are still the preferred choice for state governments, who see land clearing as the best means of saving lives. Their reasoning is straightforward, if short-termist – with less vegetation around your house, it’s significantly less likely to catch alight.

Weir, however, disputes this premise. Quite aside from the climate-altering effects of land clearing, he argues that trees keep a moist microclimate around the house, meaning the landscape is less prone to igniting from sparks and embers. At least 85% of homes lost to bushfires actually start out with an ember attack. He adds that land clearing is used as an excuse not to make buildings fire-resilient.

“It just saddens me every time I come across another bureaucrat patting themselves on the back for achieving land clearing,” he says. “Just [recently], one of the partners in a national project I’m working on was celebrating that he got approval from an Aboriginal organisation to clear their land to facilitate conventional house building. And that made me feel physically ill – that is what’s considered to be innovation in the year 2021.”

Following on from Glenn Murcutt, the celebrated Australian architect, Weir prefers to take a different tack – designing buildings that can withstand bushfires. His houses eschew tinder in favour of materials like steel and fire-resistant hardwoods, and any feature that is specifically made for bushfire is given a role in the daily life of the house.

“A few of my houses have bushfire protection screens that also provide sun control and insect control, meaning you have to use these features every day,” he says. “If there is an emergency, people know how to operate them, as it’s just embedded in their daily habits.” 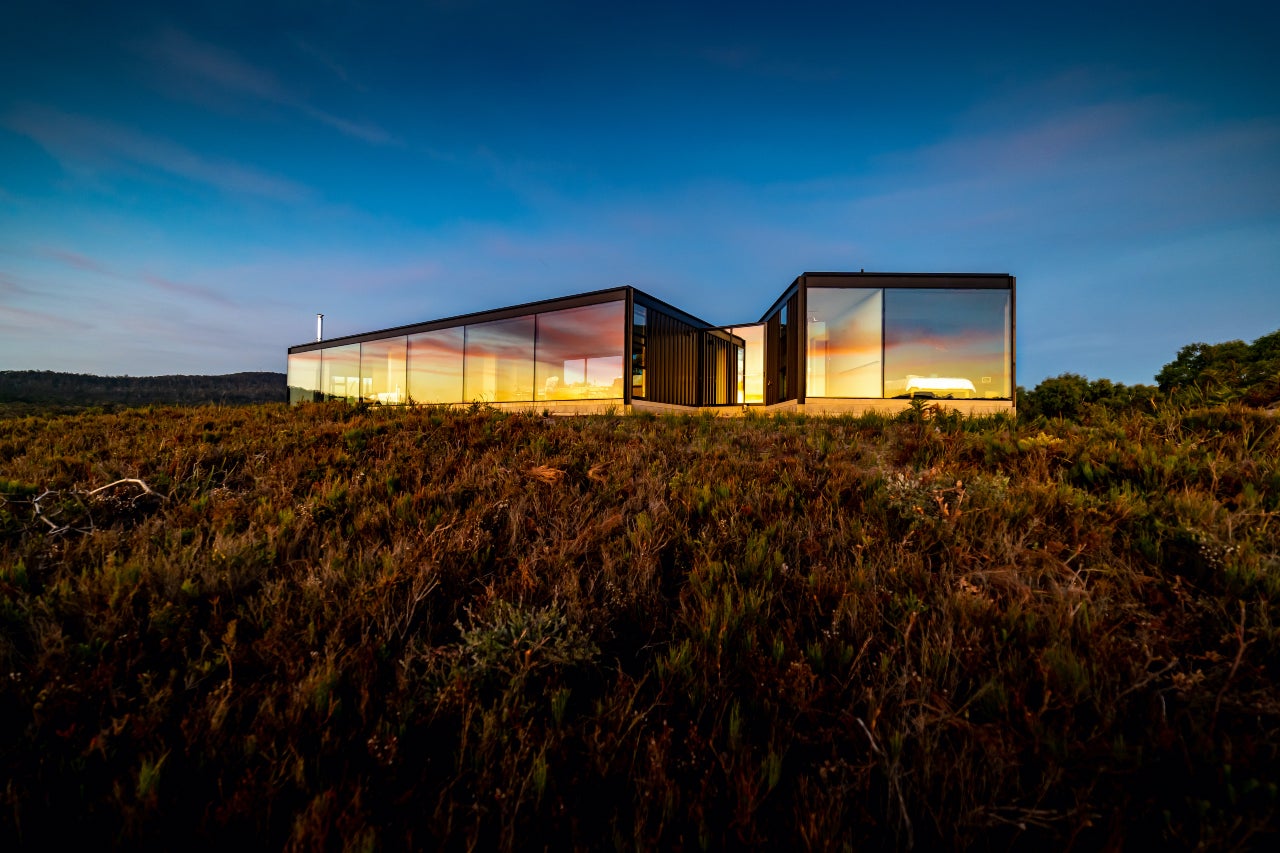 However, this is not merely about creating functional steel boxes. Weir is fascinated by what the aesthetics of bushfire design might turn out to be. At the moment, he is working on a permanent artwork that is designed to be burned, the firing process enhancing its appearance in the manner of Japanese raku pottery.

“Bushfire is a catalyst for creativity, and we need to think about how we can use bushfire as a trigger to develop a whole new typology of architecture,” he says.

Some 4,000 miles to the north-west, in Bangkok, Thai landscape architect Kotchakorn Voraakhom is trying to figure out how to foster resilience against a very different kind of natural disaster. The city’s canal network, once extensive, has now been largely stoppered with concrete, a high-rise urban jungle sprawling on top.

Concurrently, Bangkok has become more and more flood-prone. Rainfall is intensifying, thanks to climate change, and there’s nowhere for the excess water to drain. By 2030, nearly 40% of this coastal city may be submerged every year, according to the World Bank.

“Growing up, I used to see the rice field next to my house and many other porous landscapes around the city, but now it’s all covered in concrete,” recalls Voraakhom, who is the CEO of social enterprise Porous City Network and founder of the urban design firm Landprocess.

“Today, Bangkok ranks as one of the lowest per capita cities when it comes to green space.”

Much like Weir, Voraakhom has taken her painful and formative experiences and turned them into a mission statement. Today, she designs parks, public spaces and gardens that bring some much-needed greenery to the city, at the same time as tackling the flooding problem.

Growing up, I used to see the rice field next to my house and many other porous landscapes around the city, but now it’s all covered in concrete. Kotchakorn Voraakhom, CEO of Porous City Network

One notable project is the Chulalongkorn University Centennial Park in Bangkok, which as well as being spectacularly lush and verdant, functions as a kaem ling (monkey cheek) water retention zone.

During floods, it can hold nearly a million gallons of water in its storage system, which is released after the flooding has subsided. (The kaem ling metaphor comes from the late Thai monarch King Bhumibol, who believed Bangkok should be able to store floodwater, just as a monkey stores food in its cheeks.)

“When you talk about climate change, it’s not like you have a set of solutions and you can just apply a copy and paste with each project – you really have to understand the context of each site,” says Voraakhom. “It’s about understanding the seasonal change and how the landscape functions.”

Both Voraakhom and Weir, if not exactly voices in the wilderness, are unusual in their willingness to look at climate change face on. So what do they think about the architectural profession in general? Does it need to build around climate disaster, rather than trying to forestall it?

“Our design education teaches us to sell to the private sector, to use marble from Italy and China – it’s really not relevant to the set of challenges we’re having right now,” says Voraakhom. “There are so many people who need good design, like those who live in informal settlements or those who are displaced from climate change – they’re not your direct clients but you can work with governments to come up with a solution for them.”

Weir remarks that the architectural profession is often very passive and tends to do what it’s told. He thinks architects need to fight harder for the positions they hold.

“Climate disaster is considered a planning problem – planners come in and say, well, people aren’t going to live in those areas anymore, so we don’t get the design innovation,” he says.

“Architects need to have more imagination, more assertiveness, and elbow their way in, so that we don’t have planners designing us out of the whole opportunity to innovate. Right across the board internationally, conventional houses just keep getting built and the disasters just continue.”

Climate grief is a very real phenomenon, and as with any grief, it probably comes in stages. However, for those like Weir and Voraakhom who have already witnessed fire and floods, there is nothing to be gained through planting their feet in the denial stage.

It is time to move on towards acceptance.

Abi Millar is a freelance writer based in London, UK.
Websites in our network