A decade after the global economic collapse, urban development is booming.

This is good news for architects. Indeed, 2018 promises to be a favorable year for the profession: a spectacular array of sleek museums, posh hotels and some of the world’s tallest towers are slated for completion.

But income inequality is on the rise in the United States, with many city dwellers reaping few benefits from the current economic upturn.

The same could be said for the colossal scale and visual theatrics of high-profile buildings. Residential towers for the super rich are transforming the skylines of cities and public spaces are increasingly being privatised. As a result, cities are being shaped according to the desires of the elite.

This is particularly troublesome as many cities are also grappling with the ongoing politics of austerity – less and less investment in public services, infrastructure and public housing. Yet some architects have dedicated themselves to addressing these very problems.

The architecture of social engagement – the idea that buildings should address inequality and improve the lives of all dwellers – first started gaining steam during the Great Recession. It’s important to continue moving this work out from under the shadows of the glossier buildings that tend to receive the most media attention.

Three projects to be built in 2018 – a library in Brooklyn, a low-income housing project in Chicago and transitional housing for the homeless in Los Angeles – demonstrate architecture’s unique power to build, sustain and forge communities.

In the popular imagination, cities are often associated with their biggest buildings and largest monuments. But the lifeblood of all cities is their small-scale civic buildings and public spaces: libraries, schools, community centres, parks and playgrounds. These places are gathering spaces for residents; they create robust and enduring urban enclaves.

A new building for the branch library in Brooklyn’s Greenpoint neighborhood – the Greenpoint Library and Environmental Education Center – exemplifies public architecture’s ability to reflect the concerns of local communities.

A massive oil spill that was discovered in 1978 wreaked havoc on Newtown Creek, the waterway bordering Greenpoint to the north. Because cleanup efforts are still ongoing, environmental activism remains a defining aspect of the community’s identity.

Given this history, it’s no surprise that issues of environmental justice were important when it came time to rebuilding a larger library in Greenpoint, one of the more widely used branch libraries in the Brooklyn Public Library system. 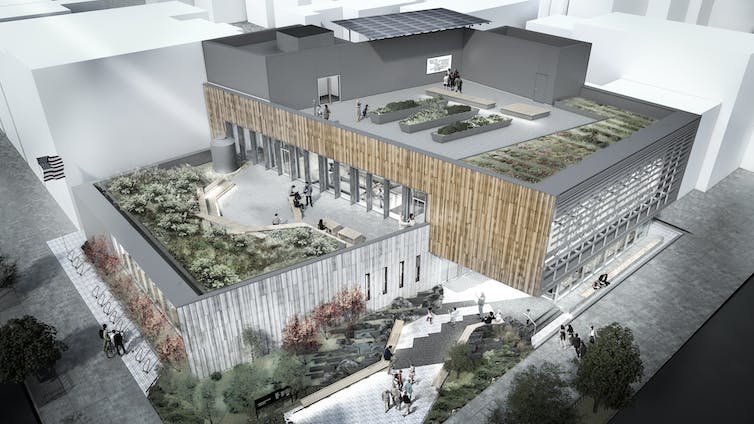 A rendering of the Greenpoint Library and Environmental Education Center in Brooklyn, N.Y. Image: Marble Fairbanks.

Designed by the architecture firm Marble Fairbanks, the two-story building has all the features of a traditional library, from book stacks to reading rooms. But there are also meeting spaces being built for the expressed use of community activists and environmentalists, as well as an education centre for environmental awareness – nods to the neighborhood’s history of environmental activism.

It’s also being built according to the highest standards of green design, with plans to reduce the building’s air pollution, energy and water use. The building’s two green roofs, in addition to its public plaza, will be planted with species native to the region.

A grant from the Greenpoint Community Environmental Fund, created through a settlement with Exxon Mobil over the spill, even paid for part of the new project. Collectively, the library’s design shows how at the local level, environmental justice and social justice are intertwined.

Beating back the tides of gentrification

The same could be said of an affordable housing project being built in the Humboldt Park neighborhood of Chicago’s West Side. As important as public places, affordable housing helps create equitable and accessible cities. Dubbed Tierra Linda, the project is the result of Landon Bone Baker Architects’ ongoing work with the community-based organisation Latin United Community Housing Association.

When it’s completed, Tierra Linda will have created 12 small-scale housing projects scattered throughout the neighborhood. Most will be located on lots that were formerly vacant. While all of the buildings plan to incorporate sustainable design practices, one of them will be Chicago’s first affordable, multifamily passive house, which means that it’s designed to dramatically reduce energy use for heating and cooling. 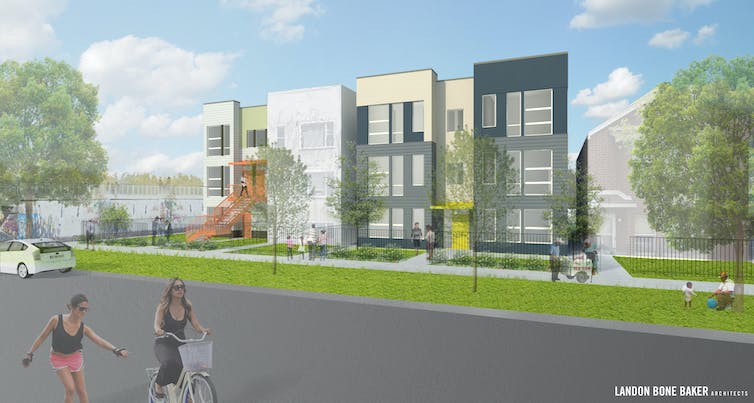 These affordable homes are part of a broader effort to maintain the vitality of the neighborhood’s Latino community, which, in recent years, has been threatened by gentrification. The Bloomingdale Trail – an elevated greenway running though Chicago’s Northwest Side – has caused real estate prices to rise in the area.

By collaborating with the community as part of the design process, Landon Bone Baker Architects’ work in Humboldt Park underscores how neighbourhood-focused projects can help sustain communities facing economic and social change.

A shipping container as a home?

Affordable housing also has the capacity to build new communities. In Los Angeles’ Westlake neighborhood, the architecture firm KTGY is building Hope on Alvarado, a transitional apartment building for the homeless. (Hope on Alvarado is one of a number of similar housing projects in Los Angeles planned by developer Aedis Real Estate Group.)

The project, which is being privately funded, will address a crisis head on: last year, California had the largest homeless population in the country, with Los Angeles County experiencing an especially dramatic rise in its numbers of homeless people.

KTGY has plans to use recycled metal shipping containers as the primary units for what will be a five-story building organised around a central courtyard. 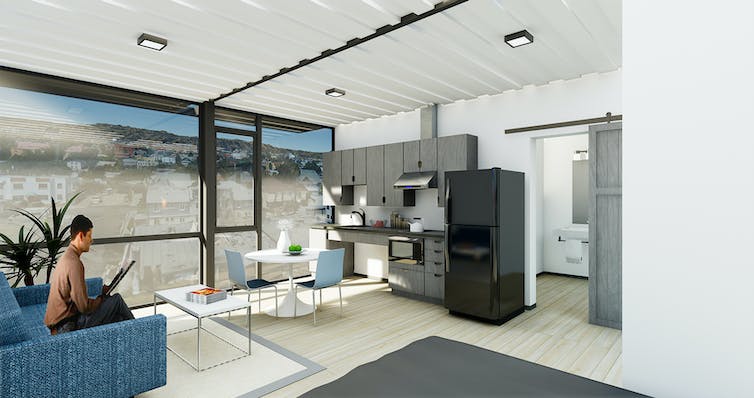 A rendering of the interior of a unit in the Hope on Alvarado Housing Project in Los Angeles, Calif. Image: KTGY.

It’s certainly an innovative approach, since the use of prefabricated containers allows for quick and cheap construction – necessary, given the dire state of homelessness in Los Angeles. At the same time, it’s not hard to see how the building could create a safe and supportive community for its future residents.

Looking at how everyday buildings can strengthen communities and invigorate urban life is becoming increasingly important. Currently over half of the world’s population lives in cities, and urban populations are only expected to grow. Meanwhile, natural and man-made disasters are wreaking havoc on cities around the globe, another trend that promises to continue.

With these challenges in mind, the smaller buildings highlighted in this article can help us understand architecture as a social art – a means to weave an urban fabric that creates lasting social ties. They offer models for thinking about architectural design as a tool that addresses the needs of individual communities – lessons that cannot be learned from the slicker buildings that so often compete for our attention.

After all, museums, hotels and towers do not alone make cities.