In early September 2020, the municipality of Kigali in Rwanda released a new master plan to guide development for the coming 30 years. It is called “Kigali Yacu” – “Our Kigali” in Kinyarwanda.

Despite the friendly local name, the plan for the country’s capital city was actually produced by a foreign entity: Surbana Jurong, a global firm owned by the government of Singapore that has emerged as a dominant force in city planning across Africa.

Though none of these countries have said why they chose Surbana, the firm does have at least one attractive calling card: before it was spun off as a separate business entity 17 years ago, it was Singapore’s Building and Development Division – and its deep connection with the city state’s political structure persists to this day. Singapore’s government has managed to build solid infrastructure and decent domiciles across the city, and this authoritarian competence has perhaps made the firm appealing to African administrators desiring to reverse the continent’s reputation for kleptocratic rule and the resultant heritage of rash, badly planned interventions.

Surbana won’t release details of its work in any of these places – a spokesperson claimed the planning documents are “owned by the clients” – and the cities involved have not released anything either. Which leaves the words of Louis Tay, head of Surbana’s African operations, one of the few clues regarding how the company operates: “Planning is straightforward,” he said a few years back. “You fly in, fly out and get the job done.”

This attitude is exactly what worries architects across Africa as their governments continue to hire outsiders to plan for the future.

“It’s a disaster, actually,” says Issa Diabaté, a partner in Koffi & Diabaté Group in Abidjan, the capital of the Ivory Coast, where the local government has recruited Japan to advise it how to plan. “Most governments have not put any thinking into their urban strategies. They bypass much of the creativity that surrounds them.”

“For the longest time, the African city has not been controlled by Africa and not even built by Africans,” says Kenyan architect Kabage Karanja, director and founder of Cave_Bureau in Nairobi. African cities, he says, come straight out of the history of colonialism, and “the tools they use to plan them have tended to be tools to control the city as opposed to tools to liberate the city”.

“Sometimes it looks like a kind of recolonisation,” admits Omar Degan, a Somali architect who grew up in Italy and whose firm, DO Architecture, is based in Mogadishu. Degan says that most outside planners don’t see the strength and importance of African traditions. “I’m living in a coastal city, and we have new Western-style buildings with curtain walls and air conditioning. This is not sustainable. And it’s creating big problems for the future.” 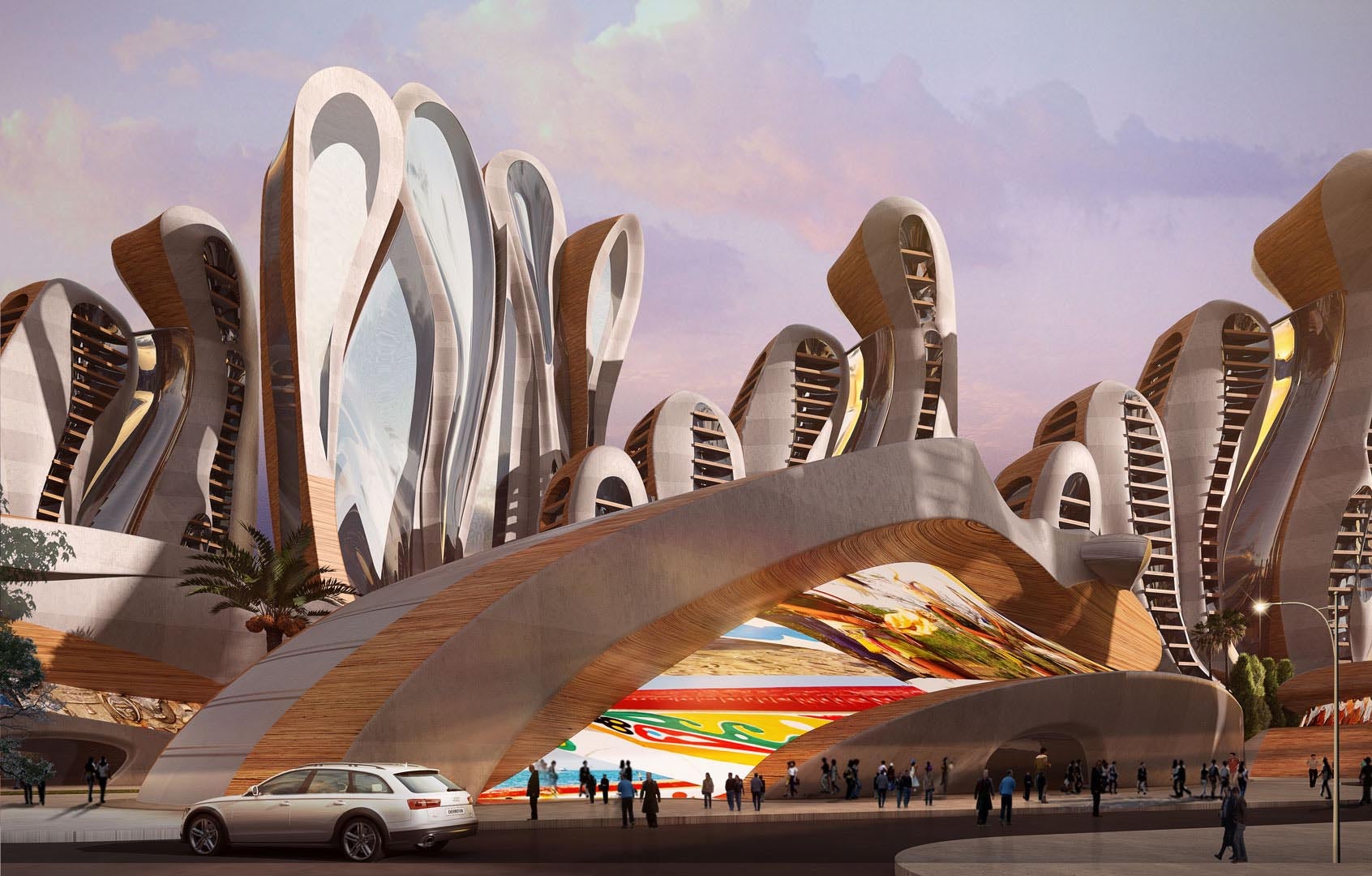 “We are looking at Akon to become the beginning of Africa’s future,” says Akon, the Senegalese-US singer for which it is named. A rendering of Akon residences, part of a 2,000-acre planned future metropolis. (Rendering courtesy of Hussein Bakri)

Even Africans who have achieved success in the diaspora seem to neglect local traditions when they plunge back into their home countries. Take, for example, Senegalese music superstar Akon’s plan to erect a massive new Wakanda-inspired city an hour’s drive up the coast from Dakar. Akon City, as he calls it, may be the world’s first metropolis controlled by legal instruments more commonly used by tech bros than city planners: when City Monitor reached out to KE International, a US development firm responsible for spiriting the plan to completion, a spokesperson said it would take a long time to respond “due to [non-disclosure agreements] in place”.

Still, renderings by the project’s Dubai-based architect, Hussein Bakri, reveal a series of flowing, flamboyant high-rises set along a Miami-style waterfront – an approach that might be dubbed Morris Lapidus on acid. Financing details are sketchy as well: Akon’s people have even refused to say how much they paid Senegal for the development rights. Nevertheless, a recent article in Le Monde suggests that although locals don’t know exactly what the megastar is up to, they are willing to accept the plan as long as they benefit. A resident of Mbodiène, one of the villages that will be impacted by Akon’s plan, told the paper that his father was paid $5,400 for his land. This amount, which probably seems like a fortune in a country where the minimum wage hasn’t changed since 1996 (it’s currently $0.37 an hour), measured against the publicly announced $6bn price tag for the new city, hardly seems generous at all.

Back in Rwanda, Christian Benimana, a principal and managing director of Kigali’s Mass Design Group, a firm known for its elegant incorporation of local knowledge, labour, materials in the schools, housing and healthcare facilities it designs in collaboration with communities, says that Surbana’s new plan for the city is a major improvement over the firm’s first effort, which debuted seven years ago. “The 2013 plan was fully loaded with urban-planning jargon and concepts that were in no way applicable to Rwanda,” he says. For instance, Benimana notes, it didn’t allow renovation of historic buildings or mixed-use structures. He says he’s happy with Surbana’s update, adding that it provides a “wide canvas of definitions of what the city should develop like.”

Still, like his fellow architects across the continent, Benimana wonders why Kigali needed to hire outside planners in the first place: “This is not to undermine Surbana, but I don’t think Surbana did any work someone here couldn’t do.”

Kunlé Adeyemi is a Nigerian architect whose firm, NLÉ, is based in Amsterdam. His most notorious creation in Nigeria was the Makoko Floating School – an award-winning wooden A-frame perched atop dozens of lashed-together plastic barrels that was erected in a lagoon near a shantytown in Lagos in 2013 – that collapsed in a storm just three years later. Adeyemi insists that although the building failed, the project itself was not a failure – it was an experiment, a concept for the future, an idea to be worked on and improved. He accuses African governments of continually seeking approval from abroad: “If it’s not the Singapore model, it’s the Dubai model. There’s nothing wrong with having international expertise, but when it’s not combined with local knowledge, it fails. I truly believe in collaborating and working with people who know a lot and people who know nothing.”

So what do these architects think a truly African city should look like in the 21st century? City Monitor was able to extract a few possible principles:

Focus on the young

Most African cities are dominated by young people. In Abidjan, one of Africa’s ten largest cities, where 70% of the population is under 30, Diabaté, an architect, suggests that planners need to understand that few of these youthful city residents are likely to buy cars, as they prefer to zoom around on motorcycle taxis. In addition, most don’t relate to the idea of commuting downtown every day. This would suggest the need for a master plan with less focus on roads leading to the centre and more focus on supporting commercial hubs in every community.

Build what people can afford

“People migrate to the city from the villages to find job opportunities,” explains Degan. “So the key question is, how you can provide the highest-quality urban standards for people with less money?”

Nairobi’s Karanja has a similar view: he breaks the city into three zones: Origin, Void and Made. Origin is where we come from – as mystical as evolution or as down-to-earth as the village where we grew up. Void is the unplanned, chaotic space of life. Made is what exists – the economic system of the world, the colonial infrastructure, the road system, the buildings. “Immense numbers of people migrate from the Origin into the Made,” explains Karanja. “They come and exist in informal settlements [which, being unplanned and self-built, are part of the Void]. By keeping the Void as it is, you control the electorate. We have to hack this system to find real impact.”

In the tiny Abobo Baoule neighbourhood of Abidjan, a strong local chief resisted the government’s pressure to redevelop the community with Western-style buildings. Instead, he leveraged his popularity and power to push a more community-oriented concept. Today, the neighbourhood, in one of the most chaotic parts of the city, remains an oasis of sorts, with low-rise buildings, tree-lined boulevards and its own sewage and sanitation systems.

Mass Design Group’s Benimana has pioneered methods of building with locally produced materials. He believes urban plans should endorse this principle for all development. Karanja adds another dimension – the idea of local finance. Saccos – savings and credit cooperatives – have grown wildly in Kenya over the past ten years, remaking the country’s financial landscape. Today, an estimated ten million Kenyans have invested in a sacco. The savings they have amassed – a combined $6bn – account for 6% of the country’s gross domestic product. “The future,” Karanja insists, “is in these groups.”

As the African continent has 48 cities of more than a million people, its governments face a choice: do they want their cities to look like every other city in the world? Or are they willing to experiment and redefine what it means to be urban?

Topics in this article : Construction , Megacities