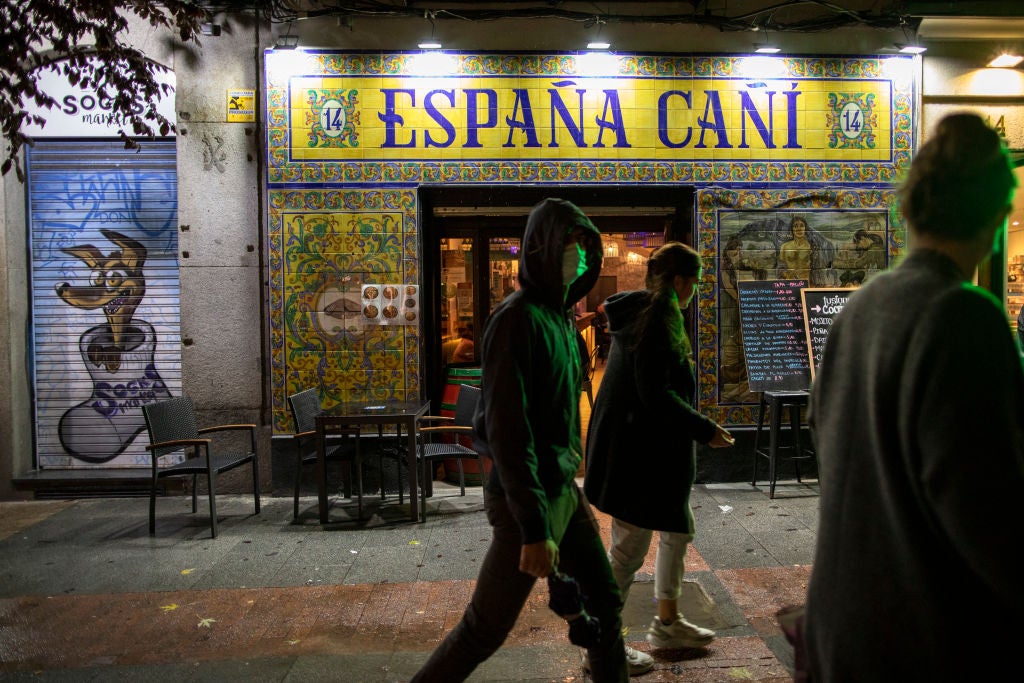 People walk past a closed restaurant during Spain’s countrywide curfew in October 2020 in Madrid. (Photo by Pablo Blazquez Dominguez/Getty Images)

Let’s rewind to early March 2020 in Spain. One day, life was normal, and the next, the nation was directed by the government to stay indoors in what became one of Europe’s strictest lockdowns. Being at home during the coronavirus pandemic has been difficult for people all over the world, but it has proved a great challenge for many Spaniards. This is especially true for the approximately 6.6 million people living in Madrid’s densely populated metropolitan area.

Spain has one of the highest percentages of flat dwellers in Europe, second only to Latvia, according to Eurostat. A large share of the city’s apartment blocks date back to the dictatorship of Francisco Franco, when a rural exodus saw many Spaniards seek out work and a new life in the city. This meant a vast and rapid depopulation of the countryside, resulting in what is still known today as la España vacía, or “empty Spain”. It also resulted in massive urban growth.

Living in a typical Madrid apartment doesn’t pose much of a problem in normal circumstances. The good weather and Spanish culture lend themselves to spending as much time as possible outside, socialising with family and friends in town squares, playgrounds or bars. A 2018 Eurostat study showed 15% of Spanish household consumption was spent in restaurants or bars, higher than the EU average of 9%.

“The street was always an extension of my home,” says Carolina Da Silva, a 38-year-old doctor from a town on the outskirts of Madrid’s metropolitan area who grew up dreaming of living in the city centre and has done exactly that for the past 12 years. “With lockdown, everything changed, including all my thoughts about life. We found ourselves stuck in an 800ft² apartment with two children. Even though we’re privileged with light and a balcony, we suffered a lot, and I missed a little garden.”

My priorities became clearer than ever. I needed space – both inside and outside – nature, clean air.

She’s not the only one. I too found myself in an 800ft² apartment with two children under four and a husband working from home. Born in London, I moved to Barcelona before relocating to Madrid almost nine years ago for work. Living in a small ground-floor apartment had never bothered me until lockdown. It was only when we were inside long term that I realised how little natural light we had. I took to placing my children on one arm of the sofa every morning at 10am for 15 minutes of direct sunlight. I gave them vitamin D drops.

Others had it worse. Facebook groups were littered with stories of children not seeing natural light, the street or even the sky at all during confinement. According to the real estate website Idealista, Madrid is the Spanish city with the highest number of interior flats; one in five households here have no view of the outside.

I began to daydream about the country, being able to walk across open spaces. My priorities became clearer than ever. I needed space – both inside and outside – nature, clean air. This was confirmed when lockdown ended and I saw the city again. All I saw was concrete, narrow sidewalks, cars. Carolina described it as “hostile”.

“Lockdown put us back in touch with our basic needs,” she says from her large new house with a garden in a small town in the surrounding mountain range of Sierra de Guadarrama, 40 minutes north-west of Madrid. (Carolina’s move swiftly followed her decision to leave; mine is a longer-term plan.) “We’re not made to live in cities,” she says. We’re here because the work is here.” That might sound extreme, but for Carolina, the advantages of city life disappeared with lockdown. With no access to local amenities, children’s activities or the perks of the local neighbourhood, she and her family were left with “only disadvantages”. That said, Carolina is keen not to cut herself off from her former life forever: “It’s not adios, it’s hasta luego”. While the city is not for her right now, she remains open to the possibility of returning to “the middle of things” one day and still owns property in the city.

Others have joined Carolina in leaving the metropolis behind for greener pastures. Londoners are looking to swap their city abodes for rural boltholes. Irish towns are making a comeback. New Yorkers are decamping to the suburbs. Washingtonians are moving near and far.

Mariano Urraco, a sociologist and professor at the Open University of Madrid, writes over email: “Lockdown has meant that many people have developed a ‘live in the moment’ mentality, of doing things here and now, a kind of ‘postmodern carpe diem’, without waiting or putting anything off.”

Elena de la Torre, a founding partner of a local nursery school, identifies with that notion. For her, lockdown ended an ongoing “leave or stay” debate that had spanned more than two years. The 29-year-old left the capital for a town in the surrounding mountains with her boyfriend in late 2020. Now, from her window, she sees the sun set over the mountain range rather than the building across the street.

“Lockdown was a key moment when I was able to stop. That’s when I noticed how small my flat was,” Elena says. When restrictions ended after 98 days and her neighbourhood jerked into life, she was hit by the smell of exhaust fumes, the number of cars and the noise, the lack of green spaces. She upgraded her 500ft² rental apartment in the city for a 700ft² one in the mountains with a communal swimming pool and garden. The cost is about two-thirds of what she’d been paying before.

Carolina’s and Elena’s face-to-face jobs remain in the city. Both are surprisingly happy with their new commutes. Elena chose an apartment close to a train station and enjoys reading and relaxing on the ride to and from work. Carolina says she likes to drive the 45 minutes it now takes her to get to work. Others need not factor in such a commute thanks to the widespread implementation and normalisation of remote working. Roughly a third of people in the EU are currently working from home, according to the Associated Press.

The recent findings of City Monitor’s Intent to Move survey, which show that almost 30% of global professionals may be considering relocating in 2021, wouldn’t surprise the people I’ve spoken with about their plans to leave Madrid. Those who can work from home are now free “to live wherever they want”, says Urraco.

Many are doing just that. A study by the real estate website Fotocasa reveals that 42% of Spanish tenants sought to rent another home in the first four months of the pandemic. It also found that searches increased in the periphery of the Greater Madrid region, as opposed to the city centre. “Many Spaniards have left lockdown wanting to look for a new home, and rent has been the formula chosen by many because it makes it possible to move with a certain immediacy and allows you to try different places and homes,” says Anaïs López, Fotocasa’s communications director. Meanwhile, statistics published by the Notary General Council in December revealed that sales of houses in Spain are also at a record high, with the volume of sales of single-family homes rising 25.9% and 13.2% in September and October, respectively. Conversely, the volume of sales of apartments is down, falling 0.1% in September and 13.9% in October.

Not everyone is moving to the mountains. Some, like Marc Expósito, 38, are headed to the beach. The graphic designer moved to the Mediterranean in the tail end of 2020 after a long, hard year that saw his agency lose a key client, his relationship with a girlfriend come to an end and his love for the city tested by lockdown. A native of Barcelona who has lived in Madrid for ten years, he asked himself the following questions: “Does it make me really happy to live in a big city at this stage of my life? Am I the same person I was when I moved to Madrid a decade ago? Do I still want to be part of a centralised system that contributes to cities with a poor quality of life? Is it all sustainable? The answer to all these questions was a simple no.”

He looks forward to starting a new life and to “leaving a better mark on the earth, looking for a fair trade on what I do for a living, and living closer to the sea and nature”.

The global progress in remote working, Marc says, is one of the few good things 2020 will leave behind. It’s certainly made his new life possible – and cheaper.

Lockdown itself provided the impetus some of us needed to make a change. For Carolina and Elena, life in the big Spanish smoke was no longer enough, or maybe it was too much. They headed for the quiet and green of nearby mountains. Marc returned to the sea. I, meanwhile, am planning a move to a small city in northern Spain’s Basque Country that my husband calls home, where we’ll have family, mountains and the coast close at hand. These are some of the things I need in my life right now. The pandemic has shown me that.

Miriam Foley is a freelance lifestyle journalist whose work has appeared in Good Housekeeping, Refinery29, Yahoo Lifestyle and many other publications.
Websites in our network