Last week, Eviction Lab, a team of eviction and housing policy researchers at Princeton University, released a new dashboard that provides timely, city-level US data for use in monitoring eviction spikes and other trends as Covid restrictions ease. 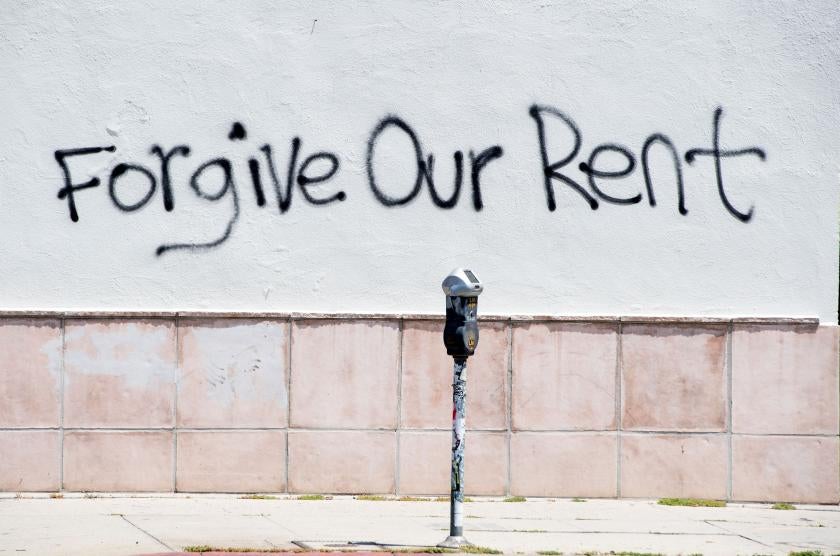 Graffiti asking for rent forgiveness is seen on a wall on La Brea Avenue amid the Covid-19 pandemic in Los Angeles. (Photo by Valerie Macon/AFP via Getty Images)

In 2018, the group released the first national database of evictions in the US. The nationwide data is granular, going down to the level of a few city blocks in some places, but it lags by several years, so its use is more geared towards understanding the scope of the problem across the US rather than making timely decisions to help city residents now.

Eviction Lab’s new Eviction Tracking System, however, provides weekly updates on evictions by city and compares them with baseline data from past years. The researchers hope the timeliness of this new data will allow for quicker action if the US begins to see a wave of evictions once Covid eviction moratoriums are phased out.

But due to a lack of standardisation in eviction filings across the US, the Eviction Tracking System is currently available for only 11 cities, leaving many more places facing a high risk of eviction spikes out of the loop.

Each city included in the Eviction Tracking System shows rolling weekly and monthly eviction filing counts. A percent change is calculated by comparing current eviction filings to baseline filings for a quick look at whether a city might be experiencing an uptick. 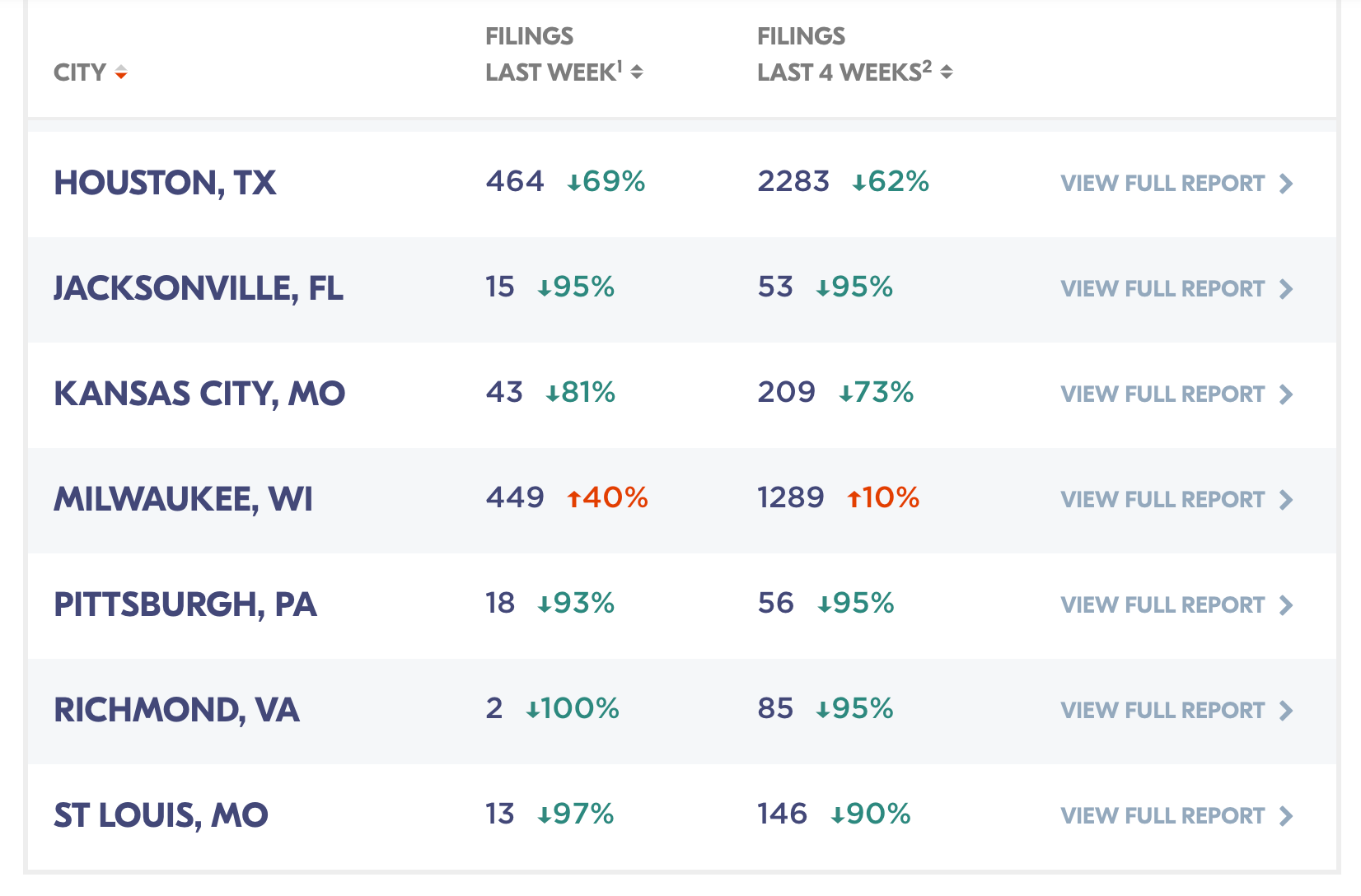 Timely US eviction data for a handful of cities is now available from the Eviction Lab. (Image courtesy Eviction Lab)

The tracking system also provides a more detailed report on each city’s Covid eviction moratorium efforts and more-granular geographic and demographic information on the city’s evictions.

Click to the above image to see a city-level eviction map, in this case for Pittsburgh. (Image courtesy Eviction Lab)

As part of its Covid Resource, the Eviction Lab, together with Columbia Law School professor Emily Benfer, also compiled a scorecard for each US state that ranks Covid-related tenant protection measures. A total of 15 of the 50 US states plus Washington, DC, received a score of zero because those states provided little if any protections.

City Monitor talked with Peter Hepburn, an assistant professor at Rutgers who recently finished a two-year postdoc at the Eviction Lab, and Jeff Reichman, principal at the data science research firm January Advisors, about the struggles involved in collecting and analysing eviction data across the US.

Perhaps the most notable hurdle both researchers addressed is that there’s no standardised reporting of evictions across jurisdictions. Most evictions are reported to county-level governments; however, what “reporting” means differs among and even within counties.

In Texas, evictions go through courts presided over by a justice of the peace. In Virginia, they’re processed by general district courts. Judges in Milwaukee are sealing more eviction case documents that come through their courtroom. In Austin, Pittsburgh and Richmond, eviction addresses aren’t available online, but ZIP codes are. In Denver, you have to pay about $7 to access a single eviction filing. In Alabama*, it’s $10 per filing.

Once the filings are acquired, the next barrier is normalising them. While some jurisdictions share reporting systems, many have different fields and formats. Some are digital, but many are images of text or handwritten documents that require optical character recognition programs and natural language processors to translate them into data. Otherwise, the filings would have to be processed by hand.

“There’s not enough interns in the world to do that work,” says Hepburn.

Aggregating data from all of these sources and normalising them requires knowledge of the nuances in each jurisdiction. “It would be nice if, for every region, we were looking for the exact same things,” says Reichman. “Instead, depending on the vendor that they use and depending on how the data is made available, it’s a puzzle for each one.”

In December of 2019, US Senators Michael Bennet of Colorado and Rob Portman of Ohio introduced a bill that would set up state and local grants aimed at reducing low-income evictions. Included in the bill is a measure to enhance data collection. Hepburn is hopeful that the bill could one day mean an easier job for those trying to analyse eviction data.

That said, Hepburn and Reichman caution against the public release of granular eviction data.

“In a lot of cases, what this gets used for is for tenant screening services,” says Hepburn. “There are companies that go and collect these data and make them available to landlords to try to check and see if their potential tenants have been previously evicted, or even just filed against for eviction, without any sort of judgement.”

According to research by Eviction Lab principal Matthew Desmond and Tracey Shollenberger, who is now vice president of science at Harvard’s Center for Policing Equity, residents who have been evicted or even merely faced eviction proceedings often have a much harder time finding equal-quality housing in the future. That, coupled with evidence that evictions affect minority populations at disproportionate rates, can lead to widening racial and economic gaps in neighbourhoods.

While opening up raw data on evictions to  the public would not be the best option, making timely, granular data available to researchers and government officials can improve the system’s ability to respond to potential eviction crises.

Data on current and historical evictions can help city officials spot trends in who is getting evicted and who is doing the evicting. It can help inform new housing policies and reform old ones that may put more-vulnerable citizens at undue risk.

Hepburn says Eviction Lab is working, in part with the ACLU, on research that shows the extent to which Black renters are disproportionately affected by the eviction crisis.

More broadly, he says, better data can help provide some oversight for a system that is largely unregulated.

“It’s the Wild West, right? There’s no right to representation. Defendants have no right to counsel. They’re on their own here,” says Hepburn. “I mean, this is people losing their homes, and they’re being processed in bulk very quickly by the system that has very little oversight and that we know very little about.”

A 2018 report by the Philadelphia Mayor’s Taskforce on Eviction Prevention and Response found that of the city’s 22,500 eviction cases in 2016, tenants had legal representation in only 9% of them.

Included in Hepburn’s eviction data wish list is an additional ask, something that is rarely included in any of the filings that the Eviction Lab and January Advisors have been poring over for years. He wants to know the relationship between money owed and monthly rent.

“At the individual level, if you were found to owe $1,500, was that on an apartment that’s $1,500 a month? Or was it an apartment that’s $500 a month?” Hepburn says. “Because that makes a big difference in the story you’re telling about the nature of the crisis, right? If you’re letting somebody get three months behind, that’s different than evicting them immediately once they fall behind.”

Now that the Eviction Tracking System has been out for a week, Hepburn says one of the next steps is to start reaching out to state and local governments to see if they can garner interest in the project. While he’s not ready to name any names just yet, he says they’re already involved in talks with some interested parties.

*Correction: This story initially misidentified a jurisdiction that charges $10 to access an eviction filing. It is the state of Alabama, not the city of Atlanta. Also, at the time of publication, Peter Hepburn was an assistant professor at Rutgers, not an associate professor.

Topics in this article : Covid-19 , Demographics