“We always joke about New York being the ‘city that never sleeps’,” says luxury Manhattan real estate broker Stan Ponte. But on 22 March 2020, Ponte’s birthday, the streets fell silent as 8.4 million New Yorkers went into lockdown. “New York seemed almost like the poster child of the pandemic early on. It was so dramatic to see Times Square empty.” 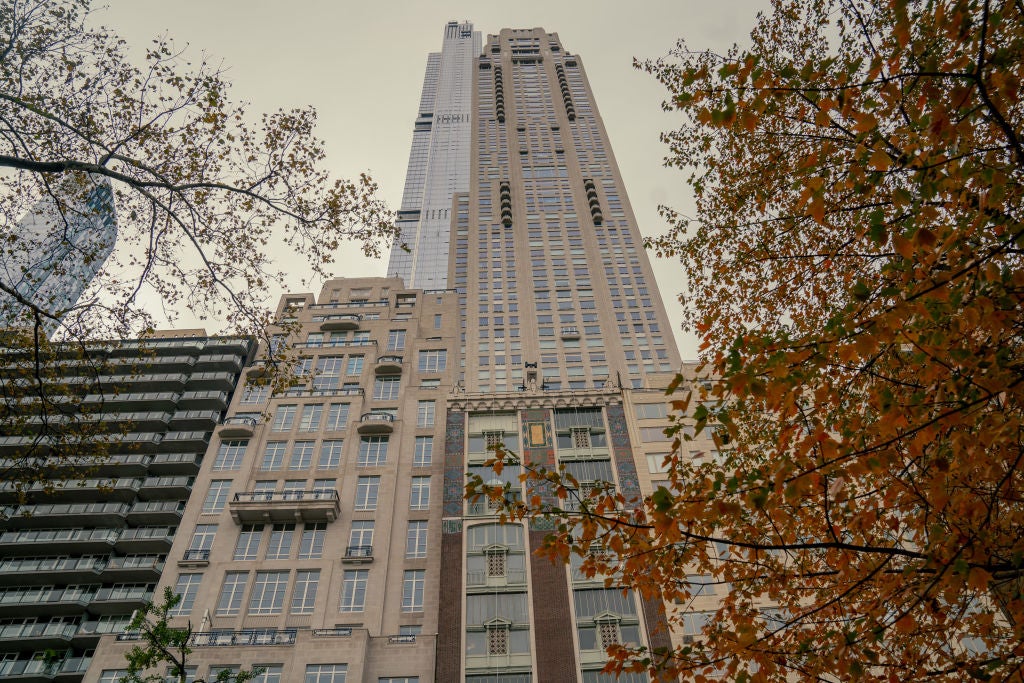 The 220 Central Park South residential skyscraper situated along Billionaires’ Row on the south side of Central Park in the Midtown neighbourhood of New York. Midtown is the only section of the borough where new-development sales are lagging behind their pre-pandemic performance. (Photo by Amir Hamja/Bloomberg via Getty Images)

Like all industries, real estate had to adapt to a ‘new normal’ but with an unprecedented market shut down and in-person viewings off-limits, in Q2 of 2020, Manhattan was in the midst of the largest percentage drop in sales for 30 years. With a market in shock and listing inventory down to a seven-year low, how did the New York City real estate market return with such a bang in 2021 to achieve the highest number of sales in the third quarter for 32 years?

If you want to know the answers, Stan Ponte is the person to ask. The senior global real estate adviser and associate broker at Sotheby’s International Realty was named the number two agent in Manhattan in 2020, achieving $144m in sales. His current listings include the $79m Pinnacle Penthouse and the $25.95m Pavilion A at Woolworth Tower Residences which was used to film the HBO show Succession, among many other luxury properties.

“There were over 4,500 closed sales in the third quarter of 2021. It was triple that of 2020, beating the 2007 record, which was 3,939,” says Ponte, explaining the figures behind the headlines. “It really brought us back to those days of the heights of the market – the pre-Lehman [Brothers] days we call it in New York.”

According to Ponte, 2021’s fourth quarter will follow a similar story, with luxury real estate doing particularly well. The broker points to the Olshan Luxury Market Report that lists contracts signed on Manhattan residential properties $4m and above. Data reveals there were 411 contracts signed in Q3, with Q4 numbers already at 394 as of 1 December 2021.

To understand the surge in sales, you have to look a little further back than the start of the pandemic. “In 2015, 2016 and 2017 we were really flying along and then in 2018, there was a bit of a chilled blanket put on the market. Part of that was the change in tax laws in 2017 that took a little bit of a swipe at ultra-high-net-worth individuals’ (UHNWI) perception of the New York City real estate market. In particular, the SALT tax implications put a $10,000 limit on how much money one could deduct on mortgage interest costs and on property tax costs.

“Then, New York City also added a graduated mansion tax. We’ve always had a mansion tax in New York of 1% on all properties over $1m but starting on 1 July 2019, they created a graduated tax which went as high as 3.9% on the acquisition of property over $25m.

“Basically everyone that was in the luxury market knew the tax was coming, they [completed] before the tax start date and then the second half of 2019 was a bit slow. We had a sense that Covid-19 was in the air by January of 2020 with reports out of China and people started to press the pause button.”

Fast forward to 2021 and, according to Ponte, a combination of pent-up demand, an acceptance of the new tax laws and the Covid-induced reevaluation of priorities among potential buyers and sellers set the wheels in motion for 2021’s record-breaking Manhattan real estate numbers.

A return to pre-Lehman days

He said: “We also had a return to something that we hadn’t seen since 2007: the turn in the market came back. When I started in real estate in 1999/2000 you’d sell someone a one-bedroom and then a few years later they’d buy a two-bedroom, then a three-bedroom, then a penthouse and around the financial crisis of 2008 we lost that kind of upgrading in the market, and people stayed put. [Last year] people decided, I want bigger, I want smaller, which is the Covid effect, right? It’s the re-examining of life and lifestyle and priorities.”

Ponte didn’t see a mad rush of UHNWI’s selling their city residences either. “The news talked a lot about people wanting to buy a place outside of an urban centre but, in truth, UHNWI’s already own the kinds of properties that fit their lifestyles. It doesn’t make sense to move out of a city that you love when you have enough money to [have] both.”

According to Ponte, buyers have been mainly domestic due to traveller restrictions but as the Manhattan real estate market came back to life in the summer, the city began to welcome back “planes full” of international buyers.

“Today, I’ll be showing a $22m penthouse to a couple from Germany. Yesterday evening, I was in a $9m apartment with a buyer from Dubai. These were people who hadn’t been able to get into the country previously. Although we did quite a number of sight-unseen purchases during Covid, many UHNWI’s from other countries did sit on their hands. It’s hard to buy a $20m apartment site unseen, though it is possible. During the pandemic, one of the highest deals I did was $34m for a penthouse in Soho. it was a record-breaking price for a penthouse in Soho and it was site unseen with a buyer from South America.”

So, the trillion-dollar question is, how has all of this impacted Manhattan’s real estate prices? “I have a surprising answer,” Ponte said. “Prices have not gone up. Averages are only up by one or two per cent. I think the third-quarter average was around 1.6–1.7% depending on the report. It’s hard to balance these two ideas, right? How can so many apartments be selling without the prices going up? And I think there are two simple reasons for that.

“One is that we had so much shadow inventory in our supply. [This is] apartments in new construction condominiums that haven’t been released. So if you built a 200-unit building, you don’t put 200 apartments on the market the first day. You put one one-bedroom, two two-bedrooms, two three-bedrooms and maybe a small penthouse. So listed is five out of 200, therefore if you take a snapshot on that day of the available inventory in New York City, you would see five apartments, but behind it, the shadow inventory is 195. Just in one building. Now take that and multiply that city-wide.”

“[Secondly], sellers are willing to negotiate to make the sale that they want to make because as we’ve all experienced, Covid has given individuals a chance to re-examine their priorities. Whether they are moving into the city, out of the city, up-sizing, down-sizing, buying a second apartment as a home office in the same building. There are so many different dynamics going on.

A seller’s market in Manhattan?

When it comes to buyers’ wants, there is one big post-pandemic change that Ponte has noticed amongst his clients: “Individuals are now truly looking for properties that are unique to their preference. They are being less driven by what the market is handing them and saying ‘No, I want something different. I want something that suits my style and my taste. And I don’t want to have one of a thousand. I want one of one, or one of two.’ We’ve seen a real focus on pre-war buildings especially.

“I very happily have nearly completed the sell-out of the Woolworth Tower [the iconic early American skyscraper designed by Cass Gilbert in 1912]. That is 32 apartments with an average price of $8m. We’ve sold 30 of them and only have two left, our Pinnacle Penthouse and our Pavillion. And these are like buying individual castles.

“One of the changes in New York City has been the zoning laws, allowing for super high towers. The New York skyline doesn’t even really look like the New York skyline anymore because buildings have gotten so tall. I think that at the UHNW-level, some buyers believe that inventory will keep increasing almost without end.”

Buyers’ motivations for purchasing also vary, suggests Ponte. ”That under $4m buyer is mostly looking for their primary residence. For UHNWIs, it’s mostly primary residences and second, third, fourth and even fifth homes. We’re doing a lot of deals for entire families where a buyer is coming in and saying ‘We don’t want to have just a small foothold in New York City to stay for a night or two, we want to be able to spend a month or two in the city per year. And we want to have a place for our mother and our two grown kids and for our grandchild, so we’re looking for five bedrooms.’ Buying properties to rent or let out is lowest on the totem pole right now. “

When it comes to the locations around Manhattan that Ponte’s clients are coveting, the luxury real estate broker has noticed buyers tend to fall into one of three categories. “[There’s] the UHNW-buyer who wants to be near Central Park, the shopping of Fifth Avenue, go to The Plaza for tea and to the Lincoln Center for ballet, all without moving more than three blocks. That’s called Billionaire’s Row, it’s 57th Street and that is where many of these ultra-high glass towers have been built. There’s a certain buyer for that and there’s a lot of property available for them.

“There’s also a buyer who almost wants to be in a small town in our city and those are the buyers that are in the West Village, Soho and TriBeCa. The buildings are only a few stories high, the streets are all cobblestone and there are cafes on every corner.

“The third category is that value-driven UHNWI looking for future value and one good example of that is the City Hall Park area of TriBeCa. There’s a beautiful park there and of course, it used to be the epicentre of New York City a century ago. It then turned into a highly commercialised zone and now City Hall Park is nearly all residential with a very strong value increase in terms of dollar per sq ft over the past few years.

In terms of investments, Ponte believes this particular part of TriBeCa is a smart choice as well as Hudson Yards, a new construction project on the west side of the city.

As the year draws to a close, Ponte is optimistic about what 2022 will bring. “The headlines on January 1 and 2 will be ‘Record-Breaking Real Estate Numbers in New York City and Major Cities Around the World’. And that headline will spur to action more activity and more records. How long will that last? I don’t know, but I look forward to seeing.”

Emma Al-Mousawi is a digital writer for Elite Traveler.
Websites in our network