Not only is this officially the most sustainable development in Europe, but it was also built on the most expensive piece of British real estate ever sold, in London’s most exclusive borough.

Occupying 12.8 acres between the upmarket boutiques of Sloane Square and the River Thames, the former British army site has been transformed beyond any recognition into one of the planet’s most desirable neighbourhoods within the highly prized SW1W postcode.

The 9,947ft² 3 Mulberry Square is one of the development’s most significant properties and has recently come on to the market. (Photo courtesy of Chelsea Barracks)

Set among five acres of gardens are the Chelsea Barracks Townhouses – a collection of new homes, architecturally styled on the iconic London Georgian Townhouse (think The Banks’ family home in Mary Poppins) sensitively adapted for today’s living. The 9,947ft² 3 Mulberry Square is one of the development’s most significant properties and has recently come on the market.

Designed by award-winning international architects PDP London, it is one of just 13 of its kind. “The townhouses are, at their core, homes for families,” says Marion Baeli, partner at PDP London. “[Though] based on traditional Georgian layouts and proportions, they are resolutely contemporary in their design and in the wealth of amenities they offer. 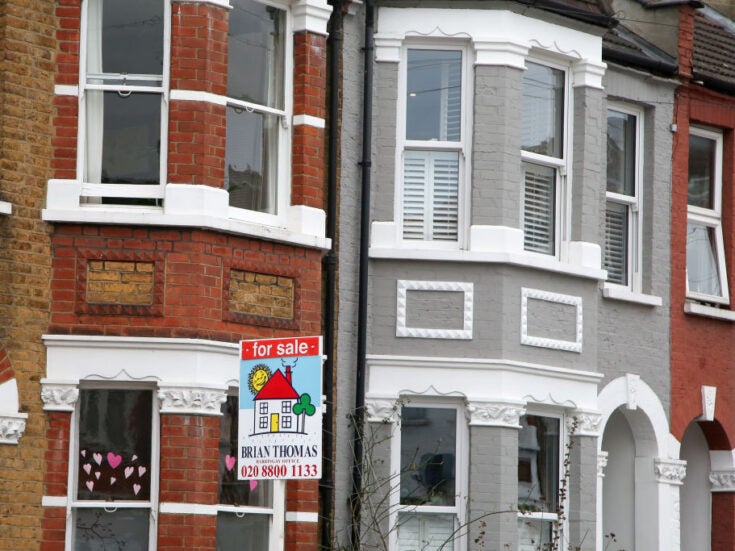 For the balustrades that line the property’s grand staircase, designers 1508 drew inspiration from the sabre of a sword. (Photo courtesy of Chelsea Barracks)

The roof terrace offers views of the London Eye and the Shard. (Photo courtesy of Chelsea Barracks)

“The front facade speaks the same language as the surrounding Belgravia locale, and the townhouses sit within a re-interpretation of the historic London green square – which is so typical of the area – justifying their place in this quintessentially British, urban landscape,” she says.

With an emphasis on heritage and craftsmanship, the townhouse’s interior is also a fresh interpretation of timeless British design, with nods to both the area’s Georgian history and the site’s military past. A clever example of this is the balustrades that line the property’s grand staircase, for which London design studio 1508 drew inspiration from the sabre of a sword.

Exquisite English herringbone and marble flooring can be found throughout and London design firm Albion Nord dressed the townhouse in an elegant neutral colour palette and touches of walnut and oak, to create a beautifully sophisticated space that works hand in hand with the property’s architecture.

The space has been designed for socialising. (Photo courtesy of Chelsea Barracks)

“We took inspiration from the British heritage of Chelsea Barracks and the nature of Georgian house,” says Camilla Clarke, creative director at Albion Nord. “The house uses traditional heritage colours such as earthy greens, china whites and dusky blues. Our aim was to bring the house to life through collected and curated objects, antiques and artworks that were carefully sourced throughout the UK. In doing so, the spaces feel timeless and inherited and have become part of the Chelsea Barracks legacy in themselves.”

The upper three levels of 3 Mulberry Square house four en-suite bedrooms, including a master suite with two dressing rooms and far-reaching views of Belgravia and beyond. To maximise the views, formal and informal reception and dining rooms also grace the upper levels of the property.

The best vistas of all are granted from the property’s private roof terrace which takes in both the London Eye and the Shard. The terrace is surrounded by green biodiverse roofing and bird boxes to attract and protect existing wildlife – two of the many eco-conscious design facets that have resulted in Chelsea Barracks being the only development in Europe to be awarded Platinum LEED (Leadership in Energy and Environmental Design) certification.

The owner of 3 Mulberry Square will be able to amass an impressive wine collection. (Photo courtesy of Chelsea Barracks)

The lower three levels – two of which are subterranean – have been thoughtfully arranged for carefree living. On the ground floor is a study along with a full-width dine-in kitchen featuring elongated ceilings and Sub-Zero & Wolf and Gaggenau appliances.

The kitchen opens onto a multi-level private garden designed by landscape architect Randle Siddeley. “The different layers and character of the vegetation were carefully selected to appeal to all the senses and create a unique and forever changing experience in the gardens throughout the years to come,” says Siddeley.

The townhouse boasts its own underground pool. (Photo courtesy of Chelsea Barracks)

Enjoy the classics in the home cinema. (Photo courtesy of Chelsea Barracks)

Across the two lower floors you will find a host of amenities including a gym, private swimming pool, cinema room and wine store, as well as underground secure parking and staff accommodation with back-of-house services. With the property spanning so many floors, it also boasts a lift allowing for instant access to all levels.

The new owner of 3 Mulberry Square will also gain membership of The Garrison Club, a carefully curated suite of lifestyle amenities reserved for the use of Chelsea Barracks residents.

Emma Al-Mousawi is a digital writer for Elite Traveler.
Websites in our network