With millions out of work, national economies have been plunged into uncertainty and cities are struggling to maintain a housing structure that supports both higher income earners who fund the city through their spending and lower income workers who make the city run through their labour. 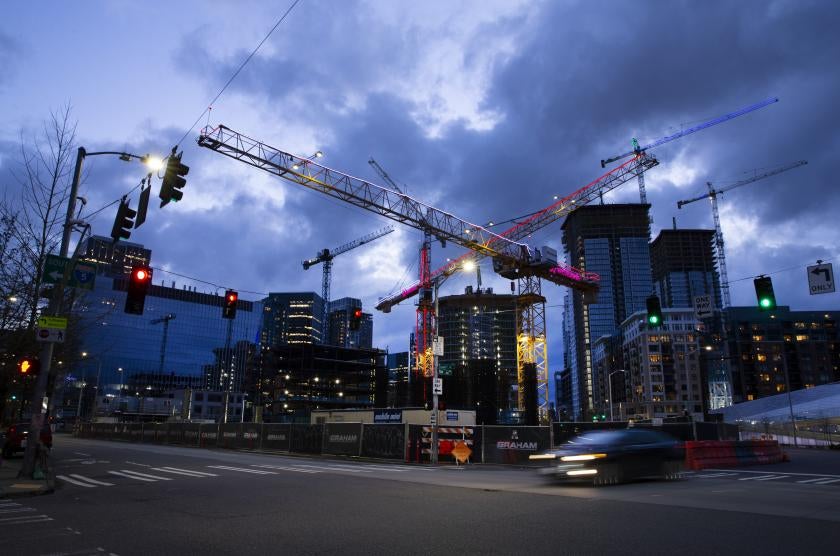 The Covid-19 pandemic has sharpened up some already pressing questions. How much is “affordable”? Who has access to affordable housing? What do affordable living conditions look like?

Many cities have enacted immediate housing relief in the form of rental assistance and eviction protection. But once these emergency stopgaps expire and the world at large begins to reopen, what will the new normal look like for affordable housing?

The coronavirus and residential construction

The growth and continued upkeep of housing stock is crucial to a city’s health. As city populations grow, the housing available to residents must also grow. If that ratio is unbalanced or the housing stock available does not match incomes, housing affordability crises such as those seen in San Francisco and Seattle occur.

The National League of Cities (NLC), a US advocacy group representing more than 19,000 cities and towns, categorizes cities like San Francisco and Seattle as “High-Opportunity Cities” when it comes to housing, meaning that they have higher median incomes and job growth rates, but issue lower numbers of new housing construction permits. Without intervention from local governments, high-opportunity cities are at risk of falling behind in the sufficiency of their housing stock.

Normally, local governments stimulate the building of affordable housing by providing incentives such as tax increment financing (TIF), tax-exempt housing bonds, or linkage fees. But with local budgets anticipating the strain of a reduced tax base due to suddenly high unemployment rates, Jim Brooks, NLC’s director of housing and community development for the Center for City Solutions, says cities might have to look for other ways to get affordable housing built.

“What that may mean is they may turn to private or not-for-profit developers who don’t need that extra kind of incentive” to build the same affordable housing, Brooks says. “And it may also be that they turn for example, to city land that they have and they’ve been holding. Or land that’s in a land trust or a land bank that can be developed that doesn’t need any city dollars to come to the table.”

In Vancouver, April 2020 new residential construction permits were down 43% compared to last April, a potential loss of as much as $171 million in construction value. Construction employment, which is tracked at the state level, was also down in British Columbia this April, a 14.5% drop from the previous month. That’s more than a 17% decrease when compared to April of last year.

In Seattle, residential housing permits have yet to decline. “At this point, it’s still too early to know what the true impact of Covid-19 will have on market conditions,” says Moon Callison, a spokesperson for the Seattle Department of Construction & Inspections, “but we expect there to be some level of decline in the near future.”

Even before the pandemic, cities such as San Francisco and Vancouver have added fewer housing units than needed by their growing populations. That means existing properties are more susceptible to market rates, with demand rising and supply remaining stagnant. Both cities have seen much larger increases in average rents than in median household incomes.

As prices increase, housing quickly becomes less affordable for residents whose wages are not increasing at the same rates.

Data compiled by GlobalData show median incomes in the Vancouver metro area have risen 4.8% between 2016 and 2019. Over the same time period, the average rent for a two-bedroom apartment has risen 21%, from $1,450 to $1,748 CAD, according to Canada Mortgage and Housing Corporation data.

In the Seattle metro area, median household incomes have risen 9.7% between 2016 and 2019, while the average home sale price recorded by Zillow has risen 28%.

In the San Francisco metro area, rents have risen 9.8% between 2016 and 2019, while median incomes have risen by 11.6%. That might sound like good news for renters, but the average rent already stood at $2,750 in 2016. The US Census Bureau estimates that nearly 47% of San Francisco residents who rent are rent-burdened, meaning that they spend more than 30% of their income on rent.

Construction during the Great Recession

While the most recent global financial crisis is not a one-to-one proxy for the effect Covid-19 is having on the economy, many variables bear a striking resemblance: record-breaking unemployment, worldwide economic instability and pervasive uncertainty over what the housing industry will look like on the other side.

Without the same level of incentives from newly cash-strapped local governments, other players will need to step up to bat for affordable housing, including non-profit organizations and national governments.

In 2009, the French housing organization Social Union for Housing purchased 15,000 stalled housing units from private developers who could not sell them at market prices due to the recession.

Sorcha Edwards, the secretary general of Housing Europe, a federation of public, cooperative and social housing in Europe, says that their organization will be looking at how the €750 billion economic stimulus plan proposed by the European Commission can be used to fund housing construction and renovation in European cities.

What is the new normal?

Until a vaccine is readily available, social distancing is the world’s primary defense against the novel coronavirus. But as city populations grow, places that don’t or can’t build adequate housing fast enough can find themselves with an overcrowding issue as flat sizes decrease and “personal space” becomes less available.

In Hong Kong, hundreds of thousands of people occupy “coffin homes” due to the city’s lack of affordable housing for low-income residents.

A recent analysis by Inside Housing found that UK cities with the worst overcrowding issues also had the worst Covid-19 mortality rates.

A RentalCafe report using Yardi Matrix data shows that the average square footage of a newly built apartment declined 5% between 2008 and 2018 in the US. An LABC analysis found that apartment sizes in the UK have declined 6% from 2000s sizes and nearly 20% from 1970s sizes.

In addition to simply having enough space to live, quality housing is also about access. Is the dwelling close to transit lines? Is there adequate access to fresh foods, decent schools and job opportunities?

A recent City Monitor analysis of access to greenspace in the UK shows that people living in deprived or disadvantaged areas often have less access to private gardens. Access to public greenspaces can also be more limited in densely populated cities where real estate is at a premium and park lands are in danger of development.

Lauren Lowery, programme director of housing and community development at the NLC’s Center for City Solutions, says that cities “will have to look at their need for housing through both a racial equity lens and a health equity lens as they’re looking to build affordable housing.”

The novel coronavirus has disproportionately affected communities of color due to systematic inequalities in access to healthcare, education and wealth. Moving forward, cities will need to consider how to remove these barriers.

What cities are doing

Providing housing security during the Covid-19 crisis is essential to the health of any city. Temporarily banning evictions and funding rental assistance programmes are only a patch for much larger, systemic housing affordability issues that many cities suffer from.

But some cities are seizing the moment to accelerate thinking and planning for longer-term housing change.

In a presentation delivered to Council at the end of April, Vancouver outlined its plan to accelerate some longer-term housing initiatives, such as increasing both below-market rental housing and nonprofit and co-op housing. Currently, only about 27% of housing units in the pipeline are social or below-market rate units.

Uncertainty in what the future will bring for construction and housing resounds throughout the industry, within local governments and among housing advocacy organizations worldwide.

An additional wrinkle surfaced several weeks ago when major tech companies, seen by many as largely responsible for the skyrocketing rents and home prices in cities such as San Francisco, announced that they would embrace indefinite remote work opportunities for their employees. This raises the question: if higher-income residents don’t need to be in overpriced cities in order to do their jobs, will they stay?

At the same time, there is evidence that some Airbnb short-term rentals may have suddenly come back onto the long-term rental market, further complicating the picture.

Amid all of this uncertainty, one thing is clear: in order to provide long-term solutions to housing affordability issues, cities and national governments must act quickly and build on the short-term measures put in place to mitigate Covid-19.