The facts and figures uncovered in the ongoing Grenfell Tower inquiry and other investigations continue to shock. An initial key finding of the inquiry’s first report in 2019 was that the external cladding that surrounded Grenfell Tower was largely responsible for the fire spreading so quickly. 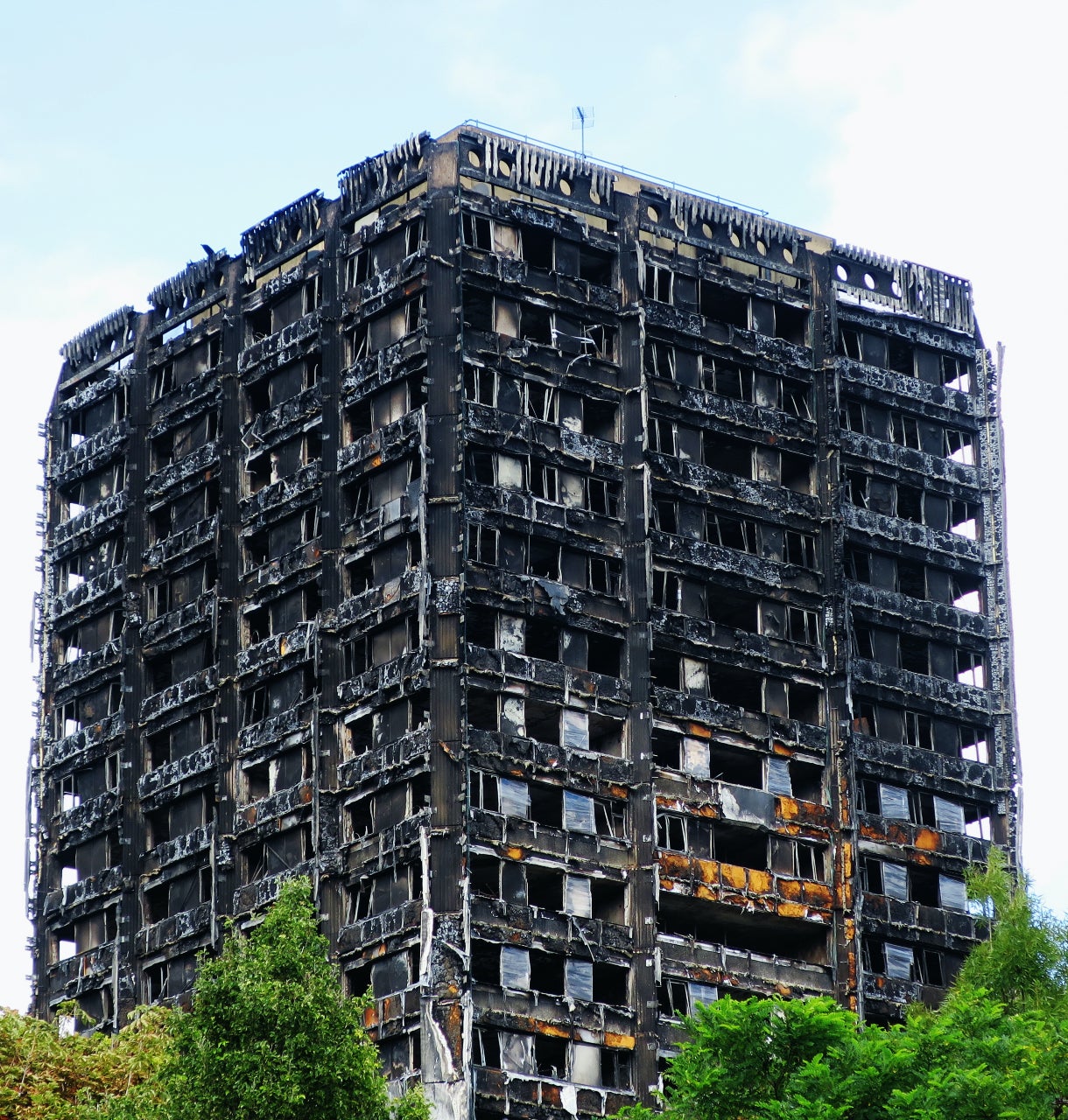 The burnt-out remains of the 24-storey Grenfell Tower block in West London, which burnt down in the early hours of 14 June 2017 claiming the lives of 72 people and making many more homeless. (Photo by Alex Donohue/Shutterstock)

Since the fire, over 400 other high-rise buildings surveyed around the country have been found to have external wall materials similar to those used on Grenfell Tower. Several more recent tower block fires also show serious fire hazards in high-rise buildings remain.

The Grenfell inquiry’s recommendations so far have focused, primarily, on fire-safety legislation, the readiness and operational challenges of emergency services and, crucially, on how everyone – from developers to the London Fire Brigade (LFB) – needs to have a better grasp of how high-rises are built and the challenges they pose.

There’s still a long way to go in terms of assessing existing buildings and ensuring their inhabitants’ safety. This will require a joint-up strategy on part of the government, fire services, builders and manufacturers to ensure fire safety in high-rise buildings.

Much has been written about how the Grenfell tragedy showed that lessons from the Lakanal House, which killed six people in a south London tower block eight years earlier, were not heeded. The Fire and Rescue Service in general, and its fire-risk assessments in particular, were shown to be inadequate.

To prevent such a tragedy from happening again, the state has put £1.6bn towards dealing with unsafe cladding systems on residential buildings of 18m and over. Before Covid hit, the government pledged to inspect and review all high-rise buildings in England by the end of 2021. It is not clear to what extent the pandemic has hampered that process.

The government is also supporting research into evacuation strategies in blocks of flats. This follows Moore-Bick’s call for an end to the “stay put” directive that proved so disastrous for the residents of Grenfell Tower.

New fire safety laws that have been passed are a welcome development, but they will require investments and expertise in fire services to undertake additional inspections and reviews.

The inquiry criticised the government’s Fire and Rescue Service for not understanding how combustible external cladding was. It highlighted the absence of a regulatory framework to share and store information about fire-safety features. It also warned about the absence of a national evacuation strategy for high-rise buildings.

In response, the government has taken prompt action. In February it named Peter Baker as the UK’s first chief inspector of buildings, to run a new national regulator of building safety. As specified in the draft Building Safety Bill 2020, Baker is tasked, in particular, with appointing an “accountable person” for every high-rise in England. Their role will be to listen and respond to residents’ concerns, giving access to vital safety information to residents and leaseholders

Further, the newly enacted Fire Safety Act 2021 improves on previous legislation, by making the owners of high-rises and other residential blocks responsible for managing the fire risk of certain key elements. This includes the structure and the external walls of the building, including cladding, balconies and windows, as well as the entrance doors to individual flats that open into communal areas.

The LFB still has a lot of crucial work to do. The inquiry was very critical of the fact that the otherwise experienced incident commanders and senior officers who attended the scene had received no training in the particular dangers associated with combustible cladding. It also criticised the brigade’s evacuation strategies and lack of contingency plans.

The Mayor of London’s monthly progress reports do show some progress has been made. In particular, policy on how emergency responders are trained to distinguish between callers seeking advice and those needing to be rescued, and on communications between incident commanders and the control room has been revised.

However, the latest independent assessment, carried out by Her Majesty’s Inspectorate of Constabulary and Fire & Rescue Services, expressed concerns that only a handful of the inquiry’s recommendations were actually completed. It highlighted staff shortages causing delays.

The inquiry found the different emergency responders (the LFB, the Metropolitan Police and the London Ambulance Service) failed to work together in an efficient way. And, so far, very little has changed.

Crucially, each declared a major incident independently, and without informing the others. This meant that the need for a properly coordinated response was not appreciated in time.

The report stressed the urgent need for clear lines of communication – and compatible tech – between the control rooms of individual services. It detailed how communication between the emergency services on the night of the fire, both remotely and on the incident ground itself, did not meet the standards required by existing fire safety protocols. The communication link with the police helicopter overhead failed to function, which also adversely affected LFB operations.

It noted that a single point of contact in each control room and direct communication between control room supervisors should have been established. A review is currently under way to address these recommendations.

Much to be done

For our buildings to be safer and those of us who live in them to feel more secure, there remains a lot to be done. Removing unsafe cladding and installing fire safety features in older buildings is a painfully slow process.

Quite who is responsible for paying for this work is an unresolved question too. Leaseholders and residents could yet end up footing the bill. Leaseholders of that east London tower that caught fire in May remain liable for £3.1m of the £11.6m cost to fix their building complex.

Critics have slammed the politicians for letting the developers off the hook and passing on the burden of responsibility. Many resident groups have called this out as a grave injustice.

Unless the lessons from Grenfell are learned and prompt action is taken, we may fail the Grenfell residents who lost their lives four years ago.

Professor of Leadership and Management, Edge Hill University.
Websites in our network