For many renters across the United States, access to affordable housing was precarious long before the coronavirus. Now, with millions freshly out of work, an inability to pay rent could amplify an already massive shock to the economy. 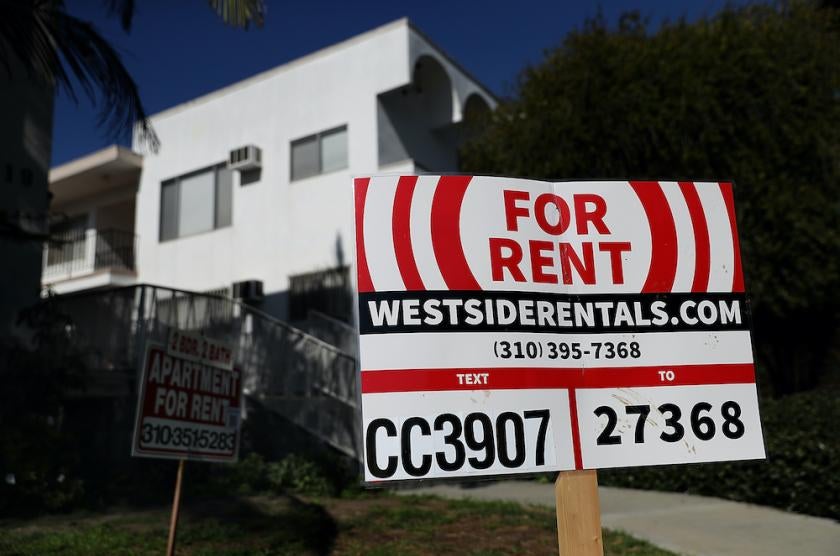 Los Angeles is one of the few US jurisdictions that has mandated a grace period for repaying rent missed during the coronavirus lockdown. (Photo by Justin Sullivan/Getty Images)

The early figures are eye-catching. Just 69% of US apartment renters had paid all or part of this month’s rent by 5 April – down from 82% a month earlier – according to the National Multifamily Housing Council, an apartment industry group. Nearly 17 million Americans filed new unemployment claims in the past three weeks, and job losses hit the service and retail sectors especially hard. The National Low Income Housing Coalition estimates that 10 million low-income US households were paying 50% or more of their income toward rent – and therefore at higher risk of experiencing homelessness – before coronavirus. Now, they estimate 1.5 million more could soon be in the same position.

Like the coronavirus itself, the rent emergency is playing out across borders, too. Residential landlords in the UK reported receiving just 44% of their expected rental income, according to the Financial Times. Canada’s CIBC bank estimates that about 70% of rent was paid in April, and tenant rights activists are organizing a campaign to cancel rent for May. In France, President Emmanuel Macron announced one of the boldest steps taken by a national government so far: promising to waive rent and utility bills for people who can’t pay.

The idea of a rent strike or rent holiday has gained steam in the US in recent weeks as renters point out that many simply don’t have another option: if they don’t have the money, they can’t pay. Landlords are in a jam, too. If they force a tenant out, can they find someone else to move in now? That’s why housing advocates and landlord groups alike are urging the US Congress to move fast to help people pay their rent.

“The good news is there are platforms that already exist” to give money to some of the most vulnerable renters, says Priya Jayachandran, president of the National Housing Trust and a former official at the US Department of Housing & Urban Development. Congress could direct more money “relatively quickly,” she says, to the Section 8 housing voucher programme for low-income tenants, or into other programmes that support housing for elderly or disabled tenants.

Advocates also want Congress to go further to protect renters against the possibility of eviction at a time when staying home is crucial. Federal, state, and local governments across the US were quick to offer at least some protections for renters in late March, as state-of-emergency and shelter-in-place orders went into effect. Congress paused evictions for 120 days for renters who live in homes with federally backed mortgages, a move that protected one in four rental units in the country, according to the Urban Institute. Many state and local governments went further, pausing new eviction filings, banning evictions for people affected by the coronavirus, and directing authorities not to enforce eviction orders until after a state of emergency is lifted.

Still, those steps don’t cover everyone, and they exist as a hugely uneven patchwork of policies that vary widely across jurisdictions. In many places, cash-strapped renters need to prove that coronavirus is the reason they can’t pay rent. They’re also expected to repay that rent once the emergency orders are lifted, possibly even right away.

Los Angeles is one of the few US jurisdictions that has mandated a grace period for repayment, giving renters 12 months to pay back their landlords or allowing them to come to another agreement. For anyone living paycheck-to-paycheck, even that repayment plan could increase monthly housing payments to an impossible level. For renters in cities and states without mandatory repayment periods, housing advocates fear the end of the coronavirus emergency will be the start of an eviction emergency.

“They’re really concerned that there will be an eviction onslaught once eviction orders are lifted,” says Alieza Durana of Princeton University’s Eviction Lab.

And eviction isn’t a one-time setback. “We call it the ‘Scarlet E,’” Durana says. That’s because an eviction on someone’s record can prevent them from getting housing, jobs, or loans far into the future.

Rent money matters on a larger economic scale, too. A 2015 US Census survey found that about 16.7 million rental properties in the U.S. are owned by individual landlords, accounting for about 46% of all rental units in the country. Many individual property owners live off that money, and large and small landlords alike pass portions of it along to financial institutions, utilities, maintenance workers, and state and local property taxes.

“We’re really hampered by not knowing how long this is going to last,” says Jenny Schuetz, a fellow at the Brookings Institution’s Metropolitan Policy Program. “The difference between not paying rent for a month or two months and not paying rent for six to eight months is enormous both for the tenant and for the landlord.”

Shuetz agrees that the best solution is to give money directly to households so they can keep making the payments and purchases that they need to.

“Canceling the rent only takes off some of the pressure on renter households,” she says. “They still have other expenses that they need to meet. If you get money to renters, then they can keep spending it, and the landlord gets money and they can keep people on the payroll.”

With the bailout requests flooding in from all sectors, there’s one fact that gives rental assistance a deeper sense of urgency. A housing affordability crisis has been brewing for years, and Americans well into the middle class don’t have much savings to fall back on.

“There’s a lot of financial insecurity among the middle class that we papered over as long as the job market was good,” Schuetz says. “There are a lot of people who looked OK as long as they had a steady source of income, but they really didn’t have much cushion. We’re going to see as a result a lot of people don’t have savings to tide them over.”

For now, Jayachandran advises renters to talk to their landlords immediately if they can’t make their full rent payment, and to sign on to letters to lawmakers advocating for rental assistance.

“Far before this crisis, we failed in our housing policy,” she says. “When you lose that work, the whole house of cards comes tumbling down.”