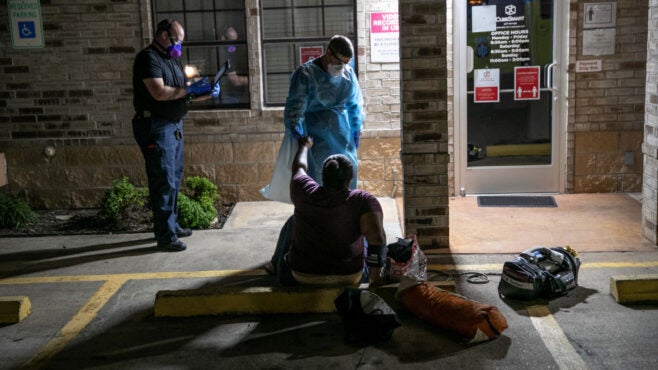 Medics assist an Austin woman suffering from Covid-19 symptoms. The city has rented local hotels as protective lodging centres for vulnerable residents during the pandemic and purchased a hotel for permanent supportive housing. (Photo by John Moore/Getty Images)

Austin, Texas, is making early progress this year on its goals to defund policing and invest in solutions to homelessness simultaneously.

The city council voted this week to buy a hotel to be used for long-term supportive housing for unhoused people and is expected to vote to purchase a second one a week later. Part of the funding for both buildings will come from money diverted from the police budget.

The move is a next step in the city’s decision to invest in alternatives to policing, a process that started last summer when the city council voted to cut the police budget by a third. It’s also the latest attempt to manage a growing homelessness crisis that has existed in Austin for decades but has worsened recently and drawn the ire of the state government.

This solution is only possible because of the transformation of Austin’s police budget. Greg Casar, Austin City Council

The vote, held Wednesday, was to decide whether to purchase two hotels at a total cost of $16m. The initial payment would come from the housing department’s general fund, but service costs to operate the supportive housing would come from a $6.5m pool diverted directly from the police department. The city council approved the purchase of one 65-room building for $6.75m but postponed the decision on the other, slightly larger hotel by a week, citing the need to gain more community input.

“Although I’m disappointed that one of the two hotels was postponed today, I’m confident we can get the second one across the finish line next week,” Council Member Greg Casar said in a statement. “These hotels will not only be homes for people but will also provide services like job aid, healthcare, mental health resources and more. This solution is only possible because of the transformation of Austin’s police budget.”

Casar, a progressive Democrat, has long been at the helm of efforts to reduce the city’s police budget but was met with resistance as the allotment grew year after year. Things changed in August when the city council voted to cut the APD budget by some $150m, spurred by a reckoning concerning racism in policing after the killing of George Floyd in Minneapolis as well as the death of local resident Michael Ramos at the hands of police. While numerous US cities made similar commitments around the same time, Austin was one of the few to follow through.

Most of the divestment was accomplished by transferring duties such as forensics and 911 services to civilian oversight. But more than $20m was cut immediately to be used for public safety alternatives including mental health services, substance use care and the $6.5m for supportive housing. Austin is one of several US cities to go beyond “defunding the police” by actively reinvesting in alternative public safety measures. Los Angeles voters passed a ballot measure to accomplish similar funding goals in November.

Austin City Council’s decision to focus on supportive housing speaks to the urgency felt regarding the city’s homelessness crisis. Unhoused populations have been rising since 2017 alongside an increase in housing costs. (The city’s most recent Point in Time count, a measure of homelessness, recorded roughly 2,500 affected people, 1,600 of them unsheltered.) For years, Austin, like most American cities, criminalised homelessness, with a ban on camping in public places.

The city decriminalised public camping in 2019 but is now facing a backlash. A non-profit called Save Austin Now, with backing from the Austin Police Association, has submitted a petition with 24,000 signatures to the city calling for a reinstatement of the ban. Texas Governor Greg Abbott has signalled state intervention and hopes to put the ban on the ballot in May of this year. Austin Mayor Steve Adler acknowledged in January that the repeal of the ban was “not working the way it needs to”.

Austin has largely embraced this supportive housing model as a more effective solution to homelessness than punitive measures. This most recent hotel will be the sixth one owned or leased by the city to help unhoused people.

Still, the measure hasn’t come without contention. The decision to delay the purchase of one of the hotels was proposed by Council Member Mackenzie Kelly, in whose district the proposed building resides. Nearby business owners have protested the purchase of the hotel, and Kelly has said she wants time to hold town halls with residents and clear up “misconceptions about the hotel purchase and homelessness in general”. Still, Kelly emphasised her support for supportive housing overall.

“We have a homelessness crisis, but treating every proposal as an out-of-context emergency is not great policy and silences stakeholders,” Kelly said during the city council meeting. “We need to provide housing to the unhoused, and we can do so in a way that creates good feelings throughout the community.”

Even before the second purchase, Austin is solidifying its place among the growing group of US jurisdictions that are purchasing hotels as a long-term strategy to curb homelessness. State and local governments were swift to lease hotels as an emergency housing measure at the onset of the pandemic, but as the crisis has worn on, places like Oregon and California have made purchases, indicating a long-term investment in providing housing.