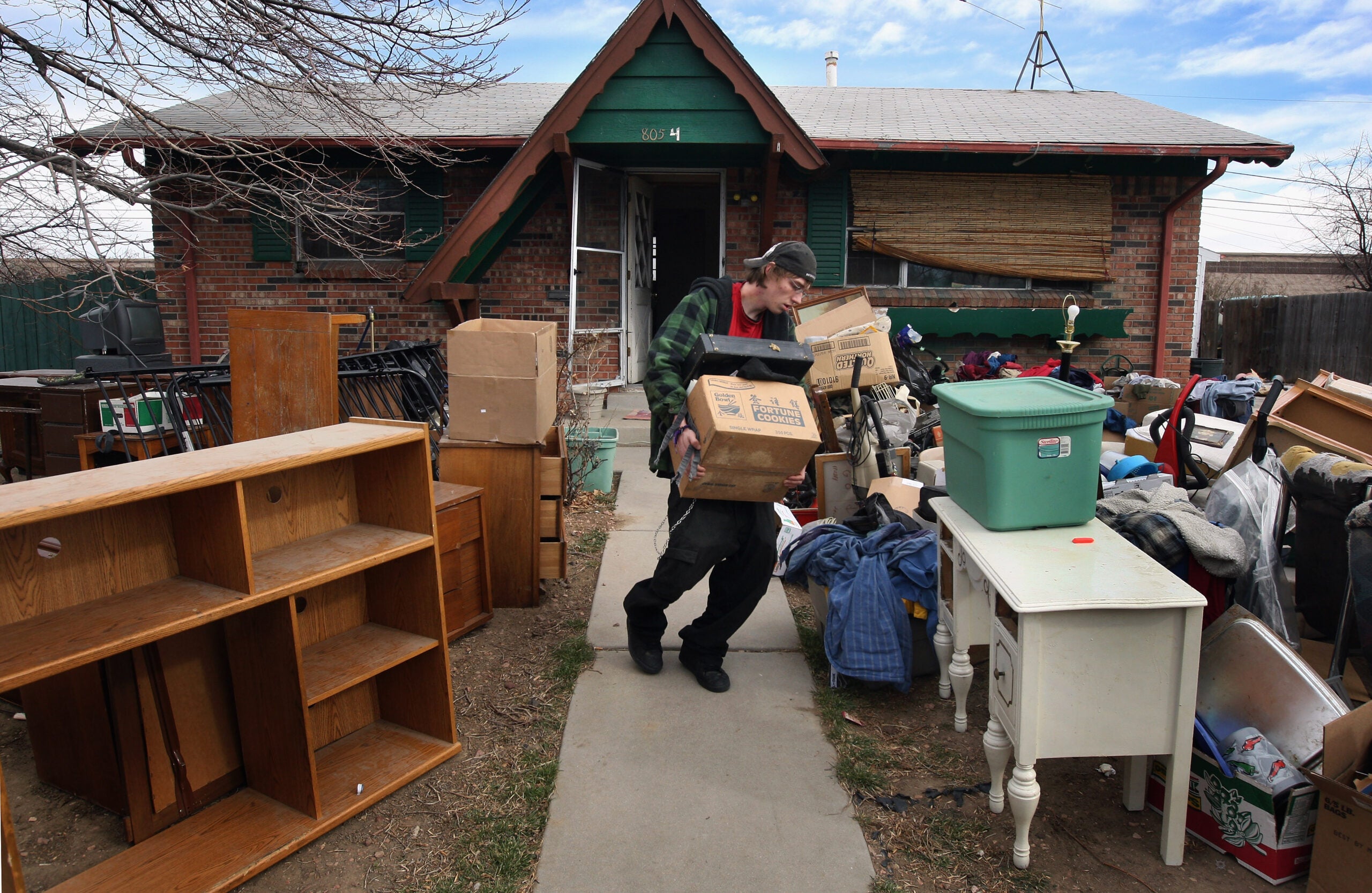 With engrossing reporting and scholarly rigor, his book Evicted: Poverty and Profit in the American City revealed how unstable the private sector housing market is for low-income Americans.

Since then, as the housing crisis in the United States grew more acute, some city leaders have begun focusing on the issues facing low-income renters. Right-to-counsel laws have been passed in big cities like New York and Philadelphia, beginning the process of guaranteeing lawyers to tenants in eviction court. New municipal-level rental assistance programmes supplement inadequate federal policies, while rent regulations are under serious consideration for the first time in decades.

Desmond, meanwhile, founded The Eviction Lab at Princeton University and established the first national database for tracking eviction data. Since the Covid-19 pandemic swept across the nation, Desmond and his colleagues have been tracking the eviction moratorium, utility cut off bans, and other protections enacted to preserve housing during this time of self-isolation and quarantine. This week, they released a scorecard for every American state.

City Monitor spoke with Desmond about the gaps in pandemic-era eviction protections, the differing profit margins for landlords in the low- and middle-income rental markets, and opportunities for public sector investment in housing during the Covid crisis.

This interview has been edited for length and clarity.

What are the most meaningful policies that states and cities can enact right now to stop widespread evictions after the crisis?

There are many states, with millions of renters, that haven’t stopped evictions. The most important thing states can do is put a moratorium on the initiation of all evictions, period. Some states have said you can’t file eviction if it’s Covid related. But in practice, what isn’t Covid related right now? Should we be placing this kind of burden of proof on renters, where they have to get a notice from their employer and a fax machine?

What are we going to do after moratoriums lift? There’s some housing advocates calling for a big injection of federal funds to allow the rent to be paid in a lump sum. But that doesn’t mess with the fundamentals of the system. Then there’s tenant groups saying this is an opportunity to cancel rent and rebalance the scales of power. I think there’s a lot of opportunities in the middle of that debate. We can start asking hard questions like, what is a fair rate of return for landlords? Our answer to that question, for a long time, has been a shrug.

Then we have to think about this coming wave of evictions if we stay the course, if the status quo prevails. We could provide legal counsel beyond just in Philadelphia and New York. We could ask for a freeze on late fees and on rent raises. You remember what happened after Hurricane Katrina? There were massive rent raises in New Orleans because a lot of the housing had been destroyed. There were rent raises during and after the financial crisis.

The Eviction Lab has a new scorecard ranking states’ Covid-era eviction policies. What have policymakers done to defend renters and what are the biggest gaps in their protections?

The states that have the strongest protections have stopped evictions being initiated, they’ve stopped the court process, and they’ve stopped their execution. That’s the beginning, middle and end of the eviction process. To us, the initiation process is the most important thing, because even if evictions are not being executed right now that still means there’s going to be a spike in evictions after the moratorium lifts. At best, it still means you’re going to have this eviction record on your name even if you don’t lose your home and that can sully your credit and ruin your future housing prospects.

Then we think it’s critical that states offer other short-term support, like foreclosure moratoriums, making sure the states are able to keep the utilities and gas flowing during the moratorium, and steps like banning late fees and rent hikes during this time where we’re all in this together.

Then there’s the big step, which is what do we do about all these rental arrears? When the moratorium started coming out, I thought the news coverage was pretty rosy. But when we dug into literally thousands of pieces of legislation we saw, gosh, there’s a lot more holes in these moratoriums than we thought.

Even in states that are known for strong renter protection, like California, they leave a lot up to local discretion. Then if you go down our list, there’s a lot of states that are completely lacking real tenant protections in this crisis.

Let’s talk about right to counsel, guaranteeing lawyers for renters in eviction court, all over the country.

The top evicting cities according to our data include Richmond, Virginia, and North Charleston South Carolina. These places have eviction rates that far outweigh Philadelphia or New York. What about renters in those kinds of communities? You could think of a policy that says if we’re going to let these evictions go forward after Covid, the least we could do is to supply lawyers in eviction court to make sure everyone has a fair shake.

Many landlords say they understand the need to pause evictions, but that they aren’t in a financial place to give tenants a break. What do you think of those claims and do you think relief should be extended at least to smaller landlords?

We’ve been digging into landlord profit margins. There’s a national survey of property owners and landlords, which you can use to calculate how much folks are making and see how profit margins vary across different kinds of neighbourhoods.

The narrative that if we don’t pay the rent, we’re going to go into foreclosure is a narrative that applies mostly to landlords in non-poor areas of the country where most evictions don’t happen in normal times. I think there’s an opportunity coming from that data to ask, why are rents so high in those poor neighbourhoods?

What was in the CARES Act or other federal legislation in response to the pandemic that has addressed the kind of housing needs we are talking about?

The stimulus was not enough. The median rent in this country is over $1,000. If you think of a $1,200 dollar check, most of that’s going to be eaten up by rent.

This a chance for policymakers to think about not only triage to get us through the crisis, but as an opportunity for us to create a new, more just society. Representative Ilhan Omar’s bill has language that would allow landlords to get out [of the industry]. I think the idea would be that property would be turned into something like public housing or cooperatively owned and run housing by the tenants. That’s an interesting idea that comes directly from tenant advocates around the country.

Let’s talk about a policy you’ve long advocated. People who don’t follow these issues super closely might not be aware that Housing Choice Vouchers are not like food stamps, where after you cross a certain income threshold you just automatically get access to them.

Prior to the pandemic, vouchers went to fewer than 20 percent of poor renters. In the Democratic primary, candidates like Bernie Sanders proposed making them accessible for all low-income Americans. Are you hearing anything like that now in D.C.?

I haven’t with respect to the Covid response. But in the context of this crisis it has multiple advantages. First, relief for tenants and property owners would be immediate. Second, a federal moratorium on evictions could be executed through that system. Right now, the federal government is scrambling to figure out how it can intervene for the third of the country who rents their homes. I think a massive expansion of the Housing Choice Voucher Program would solve that.

Speaking of affordability, housing construction right now is paused in a lot of places. Even after the lockdowns end, I imagine it’ll be very difficult to get financing to build new housing. But even before this catastrophe we weren’t building enough homes to meet the need. What could the pandemic mean for affordability in the long term?

This was the lesson we learned during the Great Depression. The private construction industry could not handle the crisis and it caused this incredibly acute housing shortage. In that space, the federal government intervened to create our public housing system.

By the 1930s, America was the only rich democracy in the world that lacked a serious federal investment in housing. This kind of problem that you’re talking about, we’ve been here before and out of that problem came significant government intervention. Could something like that come out again? We are playing fortune teller here, but maybe the best thing we can do is look at history and the lessons we already learned.

The most immediate thing is I don’t think the average reader recognises that people got evicted today in America. If our vaccine is our home, if shelter is our protection against Covid-19, then preserving homes right now seems to be the most important thing. I think that’s not getting enough play in the media right now.