As staffers at the Chicago Department of Housing watched the job loss numbers roll in this March, they realized that many thousands of their fellow residents were going to need some serious help paying rent. 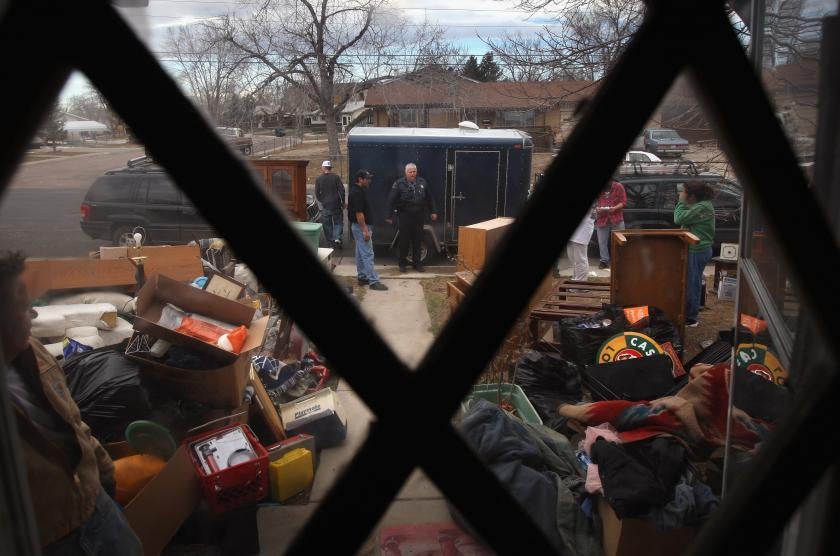 An eviction in February 2, 2009 in Adams County, Colorado. (Photo by John Moore/Getty Images)

Almost 20% of America’s third largest city already lived in poverty before the Covid-19 pandemic struck, and most of them received no assistance with housing costs.

“We were just like, oh, that means when this eviction moratorium is over there’s just going to be like tens or hundreds of thousands of people behind on their rent,” says Paul Williams, a policy analyst with Chicago’s Department of Housing. “They’re just going to get evicted. So, the idea was how do we mitigate as much of that as possible? How can we get money out the doors as fast as possible?”

Williams and his colleagues managed to get $2 million together from the city’s affordable housing opportunity fund and teamed up with the Family Independence Initiative, an organisation that helps orchestrate basic income pilot programmes. The nonprofit already had the financial software necessary to move the funds quickly to those who had lost work, and faced an uncertain future in their homes.

Using the nonprofit’s existing software, Chicago policymakers organised a plan that gives money directly to tenants. The funds can be used for anything: If rent has already been paid, tenants can spend it on food or utilities.

But the number of city residents who required housing aid massively outpaced the resources available at the municipal level. In the first week, 83,000 applications rolled in. The programme only had sufficient funding to reach 2,000 households.

There are no doubt tens of thousands of additional residents who could have applied beyond that already staggering number.

“Obviously, there are plenty of people who didn’t hear about the programme and weren’t able to apply,” Williams says. “But of those who did hear, the demonstration of need was still huge.”

Chicago is not alone in trying to fill the yawning gap for rental assistance in the midst of the pandemic. Eviction bans are still in place throughout much of the country, although a handful of states have begun to end them. Tenant groups fear that when they phase out, millions of Americans will lose their homes in the absence of government aid.

But at the federal level, efforts to move housing relief bills through the US Congress have so far been stymied by the Republican Senate. One of President Donald Trump’s economic advisors even questioned the idea of further stimulus efforts, while conservative senators fear that doing more for those in need could promote indolence.

That leaves cities like Chicago stuck with a bill they cannot possibly afford to pay in full.

In Dallas, $13.7 million was spent for rent, mortgage and utility relief and demand was so overwhelming that the programme reached its limit within a week of launching. In Minneapolis, an emergency rental assistance policy could only cover a seventh of those who applied before the deadline was up. In Philadelphia, which budgeted for 4,000 recipients, the fund hit its limit in a matter of days after 13,000 applications poured in. If everyone who was actually eligible for these funds had known of their existence, those numbers would be even starker.

“The amount of money is serious money from the standpoint of a city trying to cobble together a programme, but puny from the standpoint of the need,” says Alan Mallach, a senior fellow at the Center for Community Progress. “All the [rent aid programmes] I’ve seen are incredibly oversubscribed. Cities like Philadelphia and Chicago are trying to come up with these interim steps. That’s really important, but it’s only going to help a little bit.”

Even before this crisis the United States did not provide much assistance for renters. Unlike food aid or medical assistance, which have budgets that can expand to meet the number of people who are eligible, the Housing Choice Voucher programme that helps with rental costs is capped. Only about a fifth of Americans who are eligible for help with their housing actually receive any subsidy from the federal government.

Now the country is confronting something far beyond the usual tragedies of the American housing market. The scope of disaster facing countless families is even greater than what occurred during the Great Recession, which is why cities are stepping up as they haven’t before.

“The amount of people who are in need of rent assistance and the amount of money that is being diverted and placed into these programmes is at a much higher level than it had been before this,” says Samantha Batko, research associate in the Metropolitan Housing and Communities Policy Center at the Urban Institute. “All of this is unprecedented. The magnitude of what we’re looking at now is so much larger than it was during the recession.”

In the face of inaction by the federal government, states and cities, like Chicago, are trying to step up and fill the void. Despite the inadequacy of city budgets to meet this moment, this effort marks a serious departure. Before the pandemic, few cities had any form of rental assistance (unless people were already homeless). Chicago stood out for providing a municipal voucher programme, while Philadelphia only announced such a policy at the beginning of 2020, before the pandemic struck.

These new efforts are profoundly limited by their budgets, which even in the best of times cannot stretch to cover the great majority of low-income residents. Now as municipalities face a hideous season of austerity, thanks to plummeting local revenues and spiking service costs, their abilities will be hampered even further. (Assistance for states and localities is also held up in Congress, where Republicans have been hesitant to offer help.)

“Given the way that they’re hemorrhaging money, the amount of money that cities and even states can come up with is by definition going to be far too little to address this issue,” says Mallach.

In Chicago, meanwhile, the Department of Housing has been able to scrounge up more money for its flexible rental assistance programme. In June, the mayor and the Board of Alders – Chicago’s version of City Council – agreed to allocate another $20 million in funding, bolstered by federal dollars this time. The size of the grants will be increased beyond the original $1,000 to cope with the extended number of months that many people will not have been able to pay their rent. The goal this time is to reach at least another 7,000 families.

Tens of thousands more will probably still be left out.

“If we don’t do more, then we run the risk of having either massive evictions or landlords unable to pay their bills and mass property tax foreclosure,” says Mallach. “The whole vicious cycle. If it’s going to be solved, it’s going to require a federal solution.”