There are certain things a wise politician would never tinker with: big issues such as council tax reform, which are placed in the “too difficult” box and remain unaddressed and unresolved for decades. Another such item is the redrawing of local government boundaries.

It’s not exactly a glamorous topic and, as BBC Scotland Political Editor Brian Taylor noted in 2012, “it is a courageous politician indeed who tampers with cooncil boundaries”/

Over the past few years in Scotland, there have been calls to reform council boundaries, and give local authorities a greater say in decisions made at Holyrood. But so far, nothing has been done and the current set of 32 Scottish council areas remain.

Despite the political risk associated with boundary reform, other governments across the world have grasped this particular nettle, because it can lead to more efficient governance and cut costs.

Recent regional rejigs in Denmark and France show that it can be done. And we believe an algorithmic approach can at the very least contribute to the debate. In France, the so-called “big bang des régions” of 2016 resulted in a total of 13 new regions, from a previous set of 22.

So, we thought it would be useful to make some suggestions about what a revised Scottish council geography could look like. To do this, we used commuting data and an algorithm called Combo, which groups together places with the strongest ties, using a set of rules. And instead of the current set of 32 Scottish council areas, we ended up with 17. 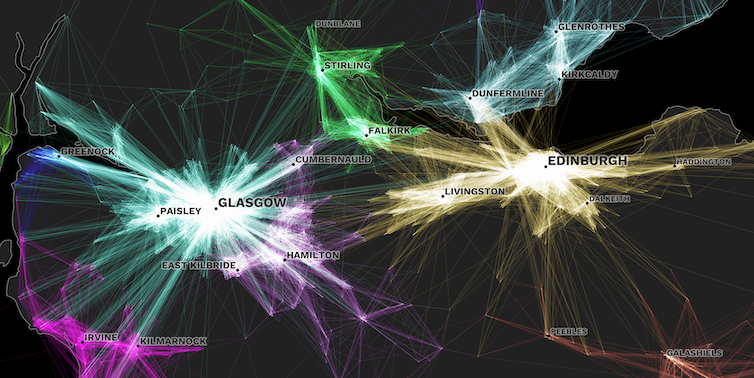 The full set of results and the detailed method can be found in our recently published paper. However, we should emphasise that these are not proposals for new council areas. Instead, we hope our results offer decision-makers some useful evidence on where boundaries could be drawn, if they were based on travel to work patterns.

Of course, commuting is only one part of the story. But it’s a very important part, particularly in places such as Glasgow, where the local economy is highly dependent on commuters living in other areas.

Overall, we think the results are largely plausible. But they also show that, when it comes to drawing boundaries on maps, algorithms definitely shouldn’t have the last word – not least because they don’t have what we might call common sense. 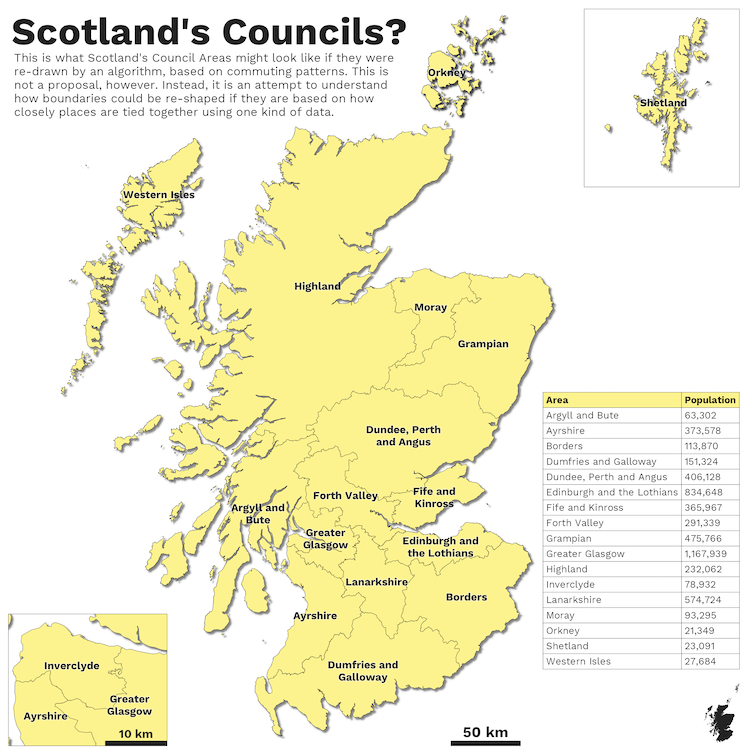 Scotland’s council areas, if they were based on commuting and drawn by algorithm. Image: Alasdair Rae and Ruth Hamilton.

As you can see from the map, there are now 17 areas instead of the current set of 32 – two fewer than those proposed by think tank Reform Scotland in 2012. The most populous of the new areas is Greater Glasgow, with close to 1.2m people. This would make it the largest local authority in the UK.

This is followed by Edinburgh & the Lothians with 835,000. Lanarkshire is next, with 575,000, then Grampian with 476,000 people. These areas are considerably larger than their current equivalents.

Others, like Highland, Moray and Inverclyde stay the same, indicating that some administrative boundaries match existing travel to work patterns quite well. Or, to put it more simply, in some cases political and economic geographies look very similar.

The table below shows the relationship between our new Combo areas and existing council areas. In the final column, you can see what percentage of the population of each new area comes from existing council areas. For example, 50.8 per cent of our new Greater Glasgow area is from the current City of Glasgow and 57.1 per cent of the new Edinburgh & the Lothians area is from the current City of Edinburgh.

On some levels, these new algorithmic subdivisions make a lot of sense – but others clearly require a human touch. For one thing, it doesn’t look quite right based on our understanding of how places function and how local services are delivered. The fact that 2 per cent of the population of our new Dundee, Perth and Angus area is across the Tay in Fife strongly suggests human intervention is needed.

The second issue relates to Scottish Enlightenment philosopher David Hume’s “is-ought” question. This is because algorithms are very good at telling us what is, but they cannot tell us what ought to be.

For example, the algorithm suggests that Inverclyde is an entirely separate area. But given how close it is to our Greater Glasgow area, from a human and common sense perspective, it appears that it ought to be part of Greater Glasgow. Indeed, such a geography would match the current NHS Greater Glasgow & Clyde region.

We need to recognise that algorithms are effectively blind to questions of history and identity. For example, our new boundaries know nothing of the Kingdom of Fife, or the Pictish Kingdom that preceded it. Yet such history often matters deeply to people and places.

This is where human decision-making, nuance and common sense come in, and why – when it comes to “too difficult” issues such as local boundary reform – humans should have the final say. But in getting to that point, we believe algorithms can certainly lend a helping hand.

This article is from the CityMetric archive: some formatting and images may not be present.
Topics in this article : Maps
Websites in our network