The ghost of the Berlin Wall lives on 30 years after its collapse. It sweeps through the statistics on immigrant populations (higher in the west) and on poverty, pensioners and electoral support for the Left Party Die Linke and for far-right parties (all higher in the east). Persistent east-west division intersects with class divides, as well as historical and present forms of institutional racism. This provides the backdrop for the particular success of far-right parties in Germany’s eastern provinces.

In the years that followed unification, eastern Germany slipped from being one of the most industrialised regions of Europe to one of the least. Average productivity had long been lower than in the west. In 1945 the zone that became the German Democratic Republic (GDR) was occupied by a weak and war-ravaged superpower, the Soviet Union, which plundered its industries and infrastructure.

In contrast, the Federal Republic of Germany (FRG) was pulled into the US sphere, with its much larger markets. It benefited from immigration flows – including from the GDR – and from self-reinforcing logics of agglomeration, whereby increased investments attract further capital and skilled workers, and so on in a virtuous circle.

The GDR also suffered from the general crises of the Soviet bloc. The Soviet system that took shape in 1928 had enabled Russia, an abysmally poor society, to industrialise rapidly during the interwar era. But with globalisation from the 1960s onward, Soviet bloc enterprises were handicapped by their weaker ability to internationalise sales and operations. In the 1980s, crisis hit the region and the Soviet bloc’s trade networks collapsed.

On unification, the conservative government of Helmut Kohl set the exchange rate of the Ostmark to the Deutschmark at 1:1 – a 300-400 per cent increase in the value of the Ostmark. Profitability for eastern firms could be maintained only if costs were reduced accordingly, but this was impossible given that all other input prices and overheads were themselves subject to the revaluation. No enterprise could withstand that shock unaided.

The Kohl government of the early 1990s adopted a blasé attitude to deindustrialisation in the east. It set up an agency, the Treuhandanstalt (nicknamed the “Handover Agency”) that oversaw the fire-sale privatisation of eastern enterprises and land – including the sacrifice of perfectly viable firms. The sell-off was accompanied by legal and illegal corruption and was heavily tilted to the interests of western businesses. 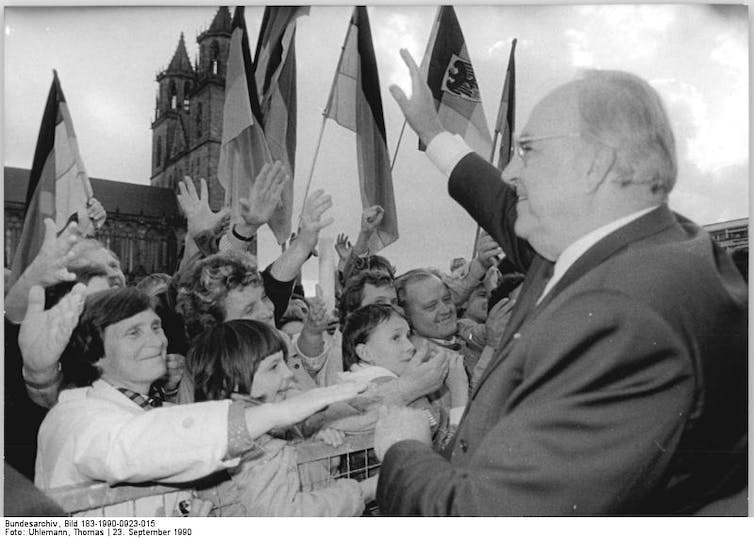 Beneath the German flag-waving, the pickings of unification were taken by the largely western rich. Overall, only 5% of Treuhandanstalt businesses were sold to easterners, 85% to westerners. Germany’s economic divide resumed, with senior management and the bulk of high-value activities located in the west.

The “great handover” combined with agglomeration logics to ensure that Germany’s western states attracted the bulk of capital and skilled migrants – this expanded local markets and, in turn, attracted further investment and immigration. Meanwhile, the declining regions of the east experienced emigration and stagnation, depopulated ghost towns and the wholesale demolition of housing.

Stuttering attempts to close the gap

The German government attempted to counter this east-west divide in two main ways but both also reinforced underlying differences. One was the construction of the east as a low-wage territory and neoliberal testing ground. In a bid to attract investment, employers were encouraged to experiment with practices that the stronger trade unions in the west would block. National collective bargaining agreements were ripped up in the east. This undermined workers’ strength and morale throughout Germany, but the extremes were in the east, particularly in Saxony, which suffers Germany’s highest rate of circumvention of collective agreements.

The other was state expenditure. “Solidarity” transfers of wealth from west to east were very substantial. This helped salaries and per capita GDP in the former east rise to around 80 per cent of the west in the early 2000s. But the gap has stuck at roughly that level ever since, and is predicted to continue or even widen.

West-east transfers are rather like giving fish to someone after taking their fishing rod. Because most of the east’s assets were appropriated by western interests, much of Germany’s transfer spending goes from western taxpayers to the east, then boomerangs back in the shape of rent and profits. To this extent, the transfer is from western workers to western proprietors, recycled through eastern infrastructure projects and welfare recipients.

Inequality and poverty are relevant to the higher levels of racism found in the east. So too are the recurring crises and insecurity that have wracked eastern Germany since unification, and the global slowdown that followed the 2008 financial crisis.

However, reference to regional socioeconomic cleavages and crises only takes us so far. After all, the right-wing, nationalist Alternative for Germany (AfD) party receives strong support in low-unemployment Zwickau (in Saxony). It polls better in the wealthy western states (Bavaria, Baden-Wurttemberg) than in the poorer Ruhr. Its support is, according to several studies, stronger among higher income earners and the self-employed than blue-collar workers, with fear of economic decline and alienation a strong psychological factor.

A key piece of this puzzle is found in the tangles of nation and immigration. In 1990, eastern Germans voted for FRG citizenship. In economic terms, as we’ve seen, something closer to annexation was the outcome. In political terms the hope was for full and rapid equality. “We are one people” was the chant on the streets as 1989 passed to 1990.

But politically, too, East Germans have experienced a form of annexation. Sweeping transformations were rammed through with little reference to public opinion or even parliament. Unification itself was accomplished by fiat, under the “annexation” paragraph of the federal constitution.

Westerners were appointed to most positions of power in the east, including senior civil service posts, professorships, and the top jobs in industry and the armed forces. East Germans were plunged into a quasi-immigrant position. They had left their Heimat behind and found themselves in a strange country. Their social furniture was suddenly upended. Their cultural capital (certificates, knowledge, etc) was devalued. Experiences of disorientation and dislocation were ubiquitous. East Germans, in journalist Toralf Staud’s words, “emigrated while remaining rooted to the spot”.

The analogy is loose, given that easterners did not face racism. Nonetheless, the perception of second-class status was hard to avoid. Perhaps, they thought, we are not “one people”?

Grievances at discrimination can translate into a desire to rebuke elites and central government. And to some extent the Left Party Die Linke is the beneficiary. But where labour institutions and solidarities are weak, as in much of the east, non-German immigrants can be scapegoated.

Labour and immigration policies pre-1989 explain the east-west distinction here. In the FRG, racism and sexism were dominant ideologies in the postwar decades. There was appalling discrimination meted out to economic immigrants and asylum seekers. But rapid economic growth combined with the sluggish rise in women entering the workforce from the 1960s through the 1980s meant immigrants were recruited on a substantial scale. Decade after decade, they fought for their livelihoods, made friends with colleagues and neighbours and won their integration from below. Bigotry was pushed back. 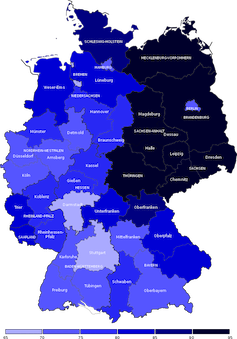 The GDR experienced the reverse. The official ideology was egalitarian and, on the face of things, anti-racist and anti-sexist. Women entered the workforce during boom times. But few immigrants arrived and those that did come were subject to brutal state discrimination and segregation. Few were permitted to settle, and the post-1989 economic collapse ensured the picture did not change. Trade unions were banned, and solidarity in workplaces centred on the (invariably white, German) work team.

Given that contact with immigrants generally undermines xenophobia, far-right parties are enjoying success in areas of low immigration, especially the east. Against expectations, the AfD receives strong support from some immigrants, but of a specific category: the German-heritage “late re-settlers” from Russia and Eastern Europe.

Many of these trends exist in Germany’s western states too, including the rise of the AfD. There is also a longstanding distrust of mainstream politicians and institutions. This is nourished by a perception that elites have feathered their nests and dumped the consequences of unification and economic crisis on the rest. The west has also experienced a rise in poverty – indeed, the east-west poverty gap is actually lower now than ten years ago.

Similarly, an “overwhelming majority” of people in Germany, according to a recent Eurobarometer report, hold that income inequality is excessive. So, together with anti-racist activism in East and West alike, the potential for a politics that cuts across “ethnic” divisions is clear.