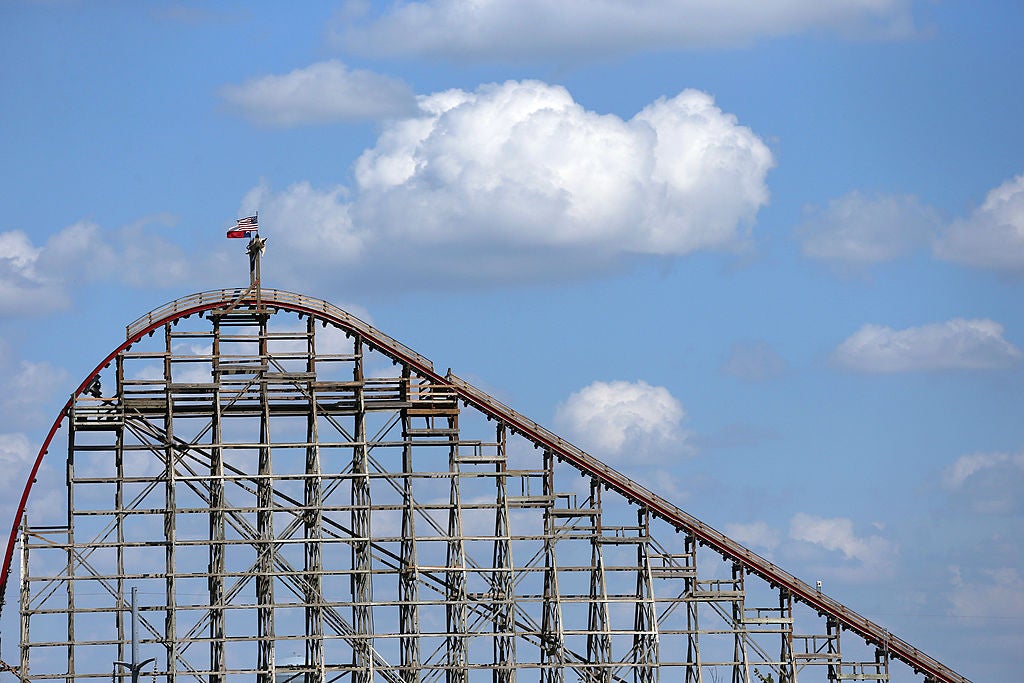 A surprisingly significant portion of many city budgets comes from narrow taxes, fines and fees, like Sandusky, Ohio’s fees on tickets at an amusement park. (Photo by Ronald Martinez/Getty Images)

Sandusky, Ohio, has an awful lot riding on the Cedar Point amusement park.

In normal times, this small city of 25,000 raises over 20% of its operating budget from small fees that are tacked onto ticket sales for the second-oldest amusement park in the US. In a region of the state where many municipalities were scaling back public services long before 2020, Sandusky has been able to rely on revenue from admission fees, using them to bolster myriad local initiatives like down payment assistance for home buyers and neighbourhood beautification programmes.

“The government has really expanded in terms of using admission tax money for economic-development purposes,” says Tom Horsman, an urban planner with the city. “It’s been putting money into housing and really trying to bring about positive change.”

Municipal revenues in the US largely depend on “the big three” taxes: sales, property and income. But a surprisingly significant portion of many city budgets comes from a battery of narrower taxes, fines and fees. An Urban Institute analysis found that the average US city with at least 300,000 people depends on revenue from smaller taxes, charges and fees for 40% of its budget. In some cities, including Denver and Long Beach, California, it’s nearly 60%.

Like Sandusky’s admission fees, many of these targeted revenue sources have proved vulnerable to the pandemic. In April, New York projected its hotel tax revenues to plummet by over 80%. Denver gets twice as much revenue from charges on air transportation as it does from property taxes, while in Long Beach, fees on water transportation represent almost a quarter of general revenue.

“It used to be that cities that were able to diversify their revenue structure away from property taxes were the winners,” says Tracy Gordon, senior fellow with the Urban-Brookings Tax Policy Center. “A lot of things that we used to think about cities’ [revenues] are turned on their head by the pandemic.”

How narrow taxes and fees became so common

The rise of these alternative revenue sources can be traced, at least in part, to the tax revolts of the 1970s. Since then, many experts and policymakers have been preaching the importance of a diversified tax base. But that conventional wisdom is not serving so well during the Covid-19 pandemic.

Although property taxes are considered one of the most reliable income streams, they also stem from higher-income and more politically engaged segments of the population. Many narrower revenue sources find footing in local government because they can raise funds from tourists or from lower-income residents, who are less likely to vote. A diversity of revenue sources can protect office holders from having to return to the well of unpopular property tax increases too often.

Since 2007, user charges have grown more steadily than any other revenue generator in the largest US cities. A September 2020 paper in the National Tax Journal found that charges and fees account for 20% of general revenue raised by the various forms of local government (including counties, school districts, special tax districts and more). Property taxes also grew more slowly than other local revenue sources since the beginning of the last recession. 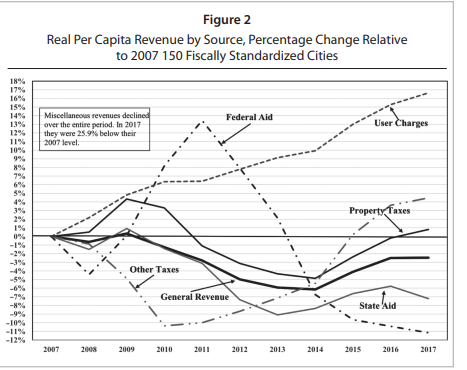 User charges have grown more than other revenue streams in city budgets. (Chart by Howard Chernick, David Copeland and Andrew Reschovsky from their article in the National Tax Journal.)

The National Tax Journal study saw user charges increase from 15% of revenue in 2000 to 20% in 2017, a substantial hike. But half of that increase came from fees that aren’t likely to change dramatically because of the pandemic: that includes sewer usage fees, which are not expected to fall, and fees on visits to public hospitals by non-lower-income people. The authors anticipate a decline of just 5% to 10% in total fee revenue because these two sources are such a large proportion of the total.

But other common fees and narrower taxes will likely get hammered during the pandemic. That includes revenue from parking, airports, hotel stays and alcohol sales – revenue sources that also rose in prominence in recent decades.

The emergence of some fees and fines has also come under scrutiny for their role in perpetuating inequities.

A 2017 study from the Journal of Politics looked at fines and court fees and found that their use as revenue was both common and strongly related to the proportion of a city’s population that is Black. Notoriously, Ferguson, Missouri, was found to be reliant on court fees for a fifth of its operating revenues. A Governing study from last year found a high prevalence of fines as revenue generators, especially in towns and small cities in the US South.

But Howard Chernick, one of the authors of the National Tax Journal study, says it’s mostly smaller jurisdictions that make use of such levies – not cities.

“It is smaller places, like Ferguson, that have relied enormously on [court and prisoner] charges, which is extremely inequitable,” Chernick says.

Property taxes show their worth, for now

In Sandusky, the pandemic delayed Cedar Point’s season by a couple of months. The vast amusement park attracts between three million and four million guests a year, but Ohio Governor Mike DeWine’s strict lockdown orders put that on hold. The park lost 98% of revenue in the second quarter, and income has remained low since the park reopened. As a result, the city lost $5m to $6m from its usual $25m operating budget.

So far, 18 city workers have been laid off, some municipal salaries have been cut, and capital projects have been put on hold. Only police and fire services have been spared. (As in most US cities, the school district is a separate entity from the municipal government and is not included in these tallies.) Routine maintenance of public parks and the downtown business district has been reduced as staffing levels have fallen.

That hasn’t been the case so far in neighbouring municipalities.

“The surrounding townships in the county are much more property-tax-based,” Horsman says. “While the city is making cuts and layoffs, those jurisdictions haven’t really had to because the property tax effects take much longer to play out.”

While that pain hasn’t arrived yet, it may be on the way. Property taxes are generally gathered once a year, and many municipalities have yet to see what the pandemic and its economic fallout will do to those collection rates. The National League of Cities projects that in fiscal year 2021, even municipalities heavily dependent on property taxes will begin facing serious headwinds.

In the medium term, pretty much all municipalities are preparing for more pain, especially as the economic recovery slows and federal aid remains held up in negotiations between Congress and the White House.

Back in Sandusky, that means the outlook could be bleak. Although Cedar Point was able to open for much of its season, attendance was down, and Horsman fears that the tourist economy may not pick up again for years to come.

“There’s going to be pressure to really bring things back to absolute basic bare-bones services,” Horsman says. “But in order to keep these cities moving, you need a lot of help from the public sector, so to cut back and just do police, fire and streets will set us back further.”