As the UK’s Covid-19 situation gradually recedes from “all-consuming crisis” levels, the government is beginning to think about other things again – among them, how to reform local governance in England. 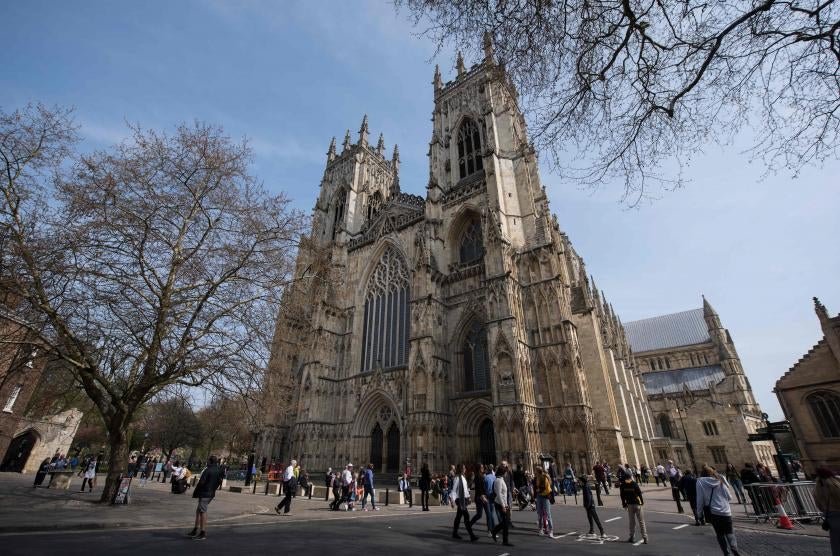 York Minster, York: could this city soon be the capital of a single local district 100 miles across? (Photo by Oli Scarff/AFP via Getty Images)

It’s a subject that has popped up periodically since the late 1960s, with national leaders occasionally seeking to reduce the layers of local government and standardise their duties. For most of recent history, local government in most of England has had a two-tier structure: county councils control services including education, transport and social care,w while smaller district councils handle issues including planning, waste, leisure and libraries.

Now, this autumn, national government is set to release a long-awaited report documenting ministers’ plans for “unitarisation”, the process by which areas with two tiers of government become areas with one tier. This promises to be quite a big deal – the biggest reform to English local government in 35 years, according to the Financial Times.

The upcoming white paper will “set out our ambitious plans for more mayors, greater powers and financial incentives to be given to local councils who embrace reform, and set out the important role we want local councils to play in economic growth in the future”, communities secretary Robert Jenrick, the cabinet minister in charge of the report, said in mid-July. (It’s worth noting, however, that these plans don’t apply to London or other big metropolitan areas, which are moving toward two-tier systems, with councils sitting below combined authorities that have elected mayors.)

The idea is to better control the costs of local administration, but there are few signs that reform will bring the sort of tax-raising powers and fiscal independence enjoyed by city governments in much of the rest of the democratic world.

England’s local councils only have the money and powers that are granted to them by national government, and having an elected mayor doesn’t automatically change this. A mayor can point to a popular mandate, but the main reason this reform might lead to more powerful local government is simply that national government has promised to give councils more powers if they adopt mayors. Exactly what powers will be on offer, and whether they will live up to this billing, remains to be seen.

For councils themselves, it’s a bit of a mixed bag. They probably will get more money and powers. Still, many don’t want to adopt a mayoral system, partly because it represents a radical upheaval to the system what councillors are used to – and partly, if cynically, because it means more power for voters and less for local parties.

Radical reform efforts of this kind have repeatedly been abandoned, but since 1992, a growing area of the country has transitioned to governance under unitary authorities.

The government has repeatedly reassured councils that it won’t mandate unitarisation: instead, it plans to offer extra money and powers for those areas that adopt it, in the hope that reform will then come from the bottom up.  But two weeks ago, Simon Clarke, Britain’s regional growth minister and one of Jenrick’s deputies, told a conference that any area that wanted a mayor, with the “resulting funding and freedoms”, would need to move ahead with it. Details about the exact money and powers on the table have so far stayed surprisingly hazy (the devolution deals passed so far have all been individually negotiated, and consequently all differed). Nonetheless, the message is clear: if an area wants to stay two-tier, then don’t come crying to us when you don’t get the powers your neighbours do.

The arguments in favour of unitarisation are simple. Firstly, it’s more comprehensible: if your rubbish bin wasn’t emptied, you no longer need to remember whether that was a failure of your district or your county. With only one council, it must be that council’s job – and by the same token, there’s less room for buck-passing from the councils themselves.

Secondly, and more pressingly, it’s more sustainable simply because it’s cheaper to run one council than half a dozen. Even before the pandemic, there was a growing gap between the amount of money local governments had and the amount they needed, as the cost of providing social care for the elderly ballooned even as council budgets were repeatedly slashed by austerity. Now that gap looks set to run into the billions. Not surprising, then, that the national government wants its reforms to cut costs.

Against that, though, there are two problems. One is that unitarisation risks increasing the distance between councils and the public. The combined authorities would cover larger populations and swaths of land, with most expected to represent between 300,000 and 700,000 residents.

The earliest unitary councils generally covered district-size urban or suburban areas. More recently, though, they’ve started covering entire counties, including Cornwall (which is relatively small) and Northumberland (which isn’t). The areas now in talks about becoming unitaries reportedly include Cumbria, the East Riding of Yorkshire and North Yorkshire. The last of these is around 100 miles across. Some proposed mergers are already receiving pushback from the public: a petition has attracted nearly 9,000 signatures opposing Blackburn With Darwen Borough Council swallowing its neighbours.

The other problem is that abolishing certain councils will mean putting a bunch of councillors out of jobs. Those same councillors are also the activist bases of the nation’s political parties. This is one reason reform has often proved difficult in the past: whichever party is in government, local reform risks hobbling it at the next election. It remains to be seen whether an 80-seat majority in Parliament will make that any easier.

The government’s white paper, of course, is merely one stage in the policymaking process. If the plans move forward, the government will still need to turn them into legislation and get them passed by Parliament. The bottom-up process it favours points to a lengthy period of talks among councils, too, as they agree on the boundaries of new local authorities as well as more prosaic matters like which offices to retain. And then the government will need to pass statutory instruments to create the new councils.

The recent reorganisation of nine councils in Dorset into just two is, in many ways, a model for the new proposal. That process took over three years. Even if the plans aren’t derailed, it will likely be some time before these proposals result in large-scale reform.

Topics in this article : Mayors