The north of England is as much of a myth as a material reality. Its particular economic, political, social and geographic qualities give it a unique character, distinct from the south of England.

Since 1980s de-industrialisation, the north has been characterised as a region in decline. But this summer’s Great Exhibition of the North is redressing this perception, by promoting the region’s vibrant culture and putting the fruits of its current artistic renaissance on show.

Yet among the flurry of exhibitions, performances, concerts and installations for locals and visitors to see, hear and play with, it’s becoming clear that the old north-south divide is fading – and new fissures are emerging in its place.

The rivalry between north and south has deep historical roots, which continue to shape the attitudes of people in both regions today. From the military successes of southern kings in the Middle ages, to the economic triumph of the south from the early 20th century onwards, historians have portrayed the south as dominating the north. By the end of the 19th century, the “southern metaphor” for an idealised English identity – typified by imagery of a bucolic rural idyll and in marked contrast to the industrial associations of the north – had won out, and the north fell outside common perceptions of “authentic” England.

Yet the very developments in the north’s creative and cultural industries, which are highlighted by the Great Exhibition of the North, also point to changes in England’s economic landscape. As a result, these deep-rooted and divisive stereotypes could soon become very dated indeed.

Across most regions of the UK, the creative sector (which includes the design, software and digital, advertising, film, broadcasting, architecture, publishing, music and performing arts industries) have supplanted the service sector (banking and finance) to become the fastest growing business sector.

This is evident in the emergence of “creative clusters” – agglomerations of businesses, workers and other important institutions, such as universities and business networks, relating to the creative industries. Some 47 creative clusters have been identified across the UK, and it’s perhaps unsurprising – given London’s long-established prominence in the cultural industries – that around a third of these are located in London and south-east England. 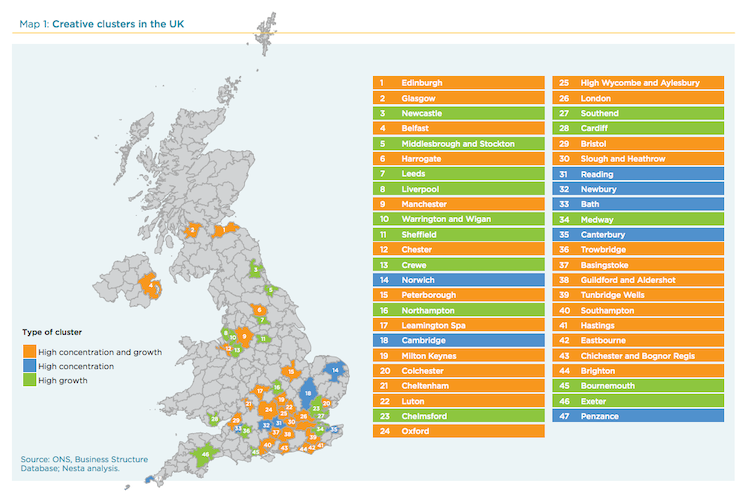 Yet just over one-fifth of the nation’s creative clusters are located in the North – traditionally thought to lack the cultural prestige of the capital. A report by innovation foundation NESTA reveals strong connections between clusters which are geographically close to each other: for example, clusters in Bristol, Bath and Cardiff in the south-west, as well as those in Manchester, Leeds and Liverpool in the north.

Cities such as Sheffield to the east of Manchester, and south of Leeds, also feed into these northern clusters, together with towns including Warrington, Wigan, Chester, Crewe and Harrogate. This grouping strengthens the evidence for a distinctive “southern north” territory, independent from the “wider north” to be found to the south, east and north of this region (the Irish Sea in the west acts as a natural boundary).

Manchester is one of Europe’s fastest growing cities, while Liverpool and Leeds are also experiencing substantial property development and regeneration. This rapid economic growth is coupled with a geographic remove from other creative clusters in the north, which are centred on Middlesbrough and Newcastle – 42 and 68 miles north of Harrogate respectively.

There are strong media production and arts facilities across the southern North region: the growth of the Yorkshire area film and TV industries has outstripped that of every other part of the UK. Screen Yorkshire is unambiguously the most commercially successful and critically acclaimed of the eight remaining English regional screen agencies.

This influence has tangible effects: most of what is seen of the north is captured in film, TV and pop music, which focus mainly on the former industrial heartlands of south Lancashire and west to south-west Yorkshire – probably because that’s where modern film and television industries are based. So it’s not just economically, but also culturally, that the southern North is rising to prominence on the national stage.

What’s more, experts suggest that the HS2 rail programme – which will reduce travel time between Manchester, Leeds, Sheffield and London – is likely to draw the southern North even further away from the influence of the wider north, and towards southern cities such as London.

So, as Newcastle and Gateshead continues with the hard-won honour of hosting the Great Exhibition of the North, it’s worth reflecting on the definition of that label. Clearly, there are significant variations in economic and cultural output within the north of England. Before our very eyes, a new north-south divide is emerging, within what was previously understood as “the north” itself.