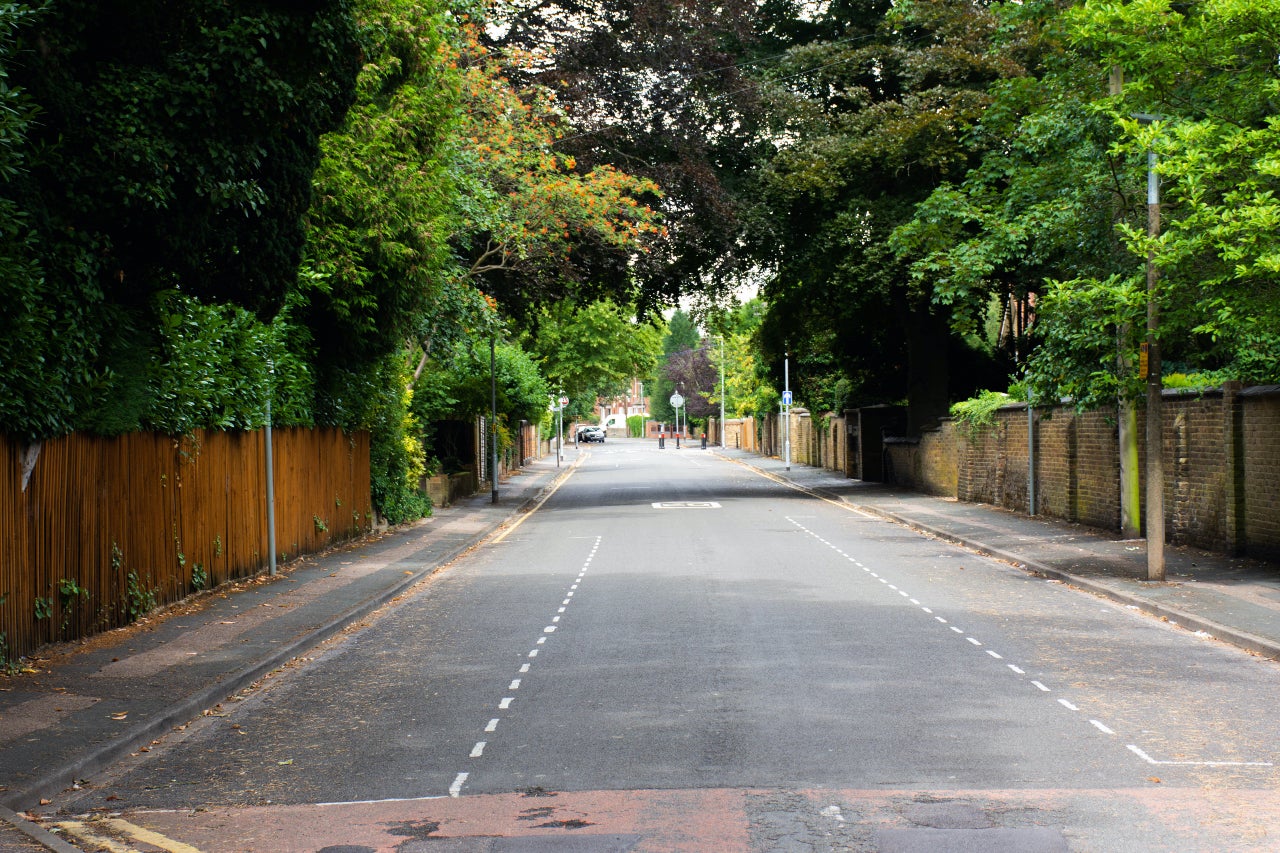 A low-traffic road in the suburbs of London. (Photo by Josh Brown Photography/Shutterstock)

The Manchester inner-city suburb of Levenshulme is on a journey. Its house prices have increased over 50% in the past five years, the disused railway station is turning into a cycle café and co-working space, and the Sunday Times deemed it one of the “best places to live” in 2019 – the same year an off-licence sitting vacant for two years on a street corner transformed into a vegetarian deli and natural wine seller.

“Perfect for cool kids who now have kids”, the newspaper declared. “Good old-fashioned gentrification is alive and kicking in Greater Manchester.”

Amid the redbrick terraces of Levy, there has always been a strong local pride. The community is known for pulling together to protect its neighbourhood. Campaigners saved the historic Carnegie library and local swimming baths from closure in 2013, and have over the years fiercely opposed the development of the Highfield Country Park nature reserve, a haven on the site of an old brickworks.

Yet when 14 roads were closed to cars on a trial basis in January, residents turned on each other. Some welcomed the changes, which make it easier to walk and cycle and create a cleaner, quieter environment on the streets in question. Others opposed them, arguing that they merely divert traffic from quiet streets to already congested residential roads.

Wooden planters installed to block off roads to motor traffic were tipped over, cars were filmed mounting the pavement to get around the closures, and some drivers began ramming the planters.

Members of the group originally tasked by councillors to come up with the scheme released a statement last year claiming they were facing “threatening behaviour, including one member having to be warned that people were knocking on doors asking for their home address”.

On Sunday 25 April, around 100 south Manchester residents stopped traffic in protest against the Levenshulme planters.

Versions of these street-level conflicts are playing out across the country. The traffic filters are part of a scheme known as low-traffic neighbourhoods – or LTNs –  which are an attempt to stop cars rat-running along residential streets.

Towards the start of the pandemic, amid a surge of walking and cycling due to social distancing measures, the Conservative government “expected” councils to trial LTNs as part of its “emergency active travel fund” – and schemes had to be in place within 12 weeks to qualify for funding.

Clustered in their hundreds in London, but present across the country (see the map below), LTNs have become a new frontier in the culture war, which is playing out in campaigns ahead of England’s biggest ever set of local elections on Thursday 6 May.

“It’s our version of Brexit in terms of how divisive it is – it’s all kicking off,” says Dan Sims, a 38-year-old mental health support worker and Labour member who has lived in Levenshulme for nearly a decade, and Manchester for 20 years. So far, he has helped fix six of the damaged filters, working into the night to clear up the compost and move them back into place.

“You just want a nice place to ride your bike and live and not have speeding idiots go past your house all the time. That’s all this is about,” he says. “But I think, like everything at the moment, things can be turned into culture wars.”

In a New Statesman report last year, one LTN-sceptic in Lewisham, southeast London, joked that the situation on the ground was “how civil wars start”.

Even though LTNs are Tory government policy, anti-LTN campaigners descended on London Mayor Sadiq Khan’s campaign launch on 4 March, forcing him to take cover in a café on the advice of his protection officers.

In an email to supporters on 20 April, Brexit Party-turned-Reform UK leader Richard Tice promised to remove “pointless Low Traffic Neighbourhoods” – listed alongside his main campaign preoccupations of “saving our statues” and “promising to never lockdown again”.

London mayoral candidate Laurence Fox, whose campaign is built around opposing policies perceived as “woke”, has also pledged to scrap LTNs, calling them “nonsensical and dangerous”.

The map below shows where LTNs are, coloured according to which party runs the local council:

It should be noted, however, that the data is incomplete, as there is no central database for LTN schemes, and they are often being modified and removed. (Click here to report a missing scheme you know about.)

There is also a lack of local LTN maps available online from councils, which is a key problem with the hastily-imposed schemes: poor communication with drivers. (Hounslow Council, which collected half a million pounds in fines from drivers using the LTN at Turnham Green Terrace in west London last year, was accused of providing “inadequate signage” and confusing drivers.)

In addition to the mayoral races, a number of council candidates are standing in the local elections specifically to oppose LTNs, and political parties can be divided on the issue. Ealing Lib Dem councillors oppose the LTNs in the outer west London suburb, for example, whereas Wandsworth Lib Dems have lamented the cancellation of the scheme by the southwest London council after just two weeks in their patch.

Speaking about LTNs when campaigning ahead of the local elections can be divisive and difficult for candidates. The New Statesman hears talking heads on the progressive left have even been workshopping certain messages and framing for their arguments in favour of LTNs – focusing on their positive impact rather than gloomy pollution stats – so often are they monstered on channels like talkRADIO and LBC for supporting the policy.

Saying anything out of turn about LTNs can “leave you being pummelled on social media”, says Caroline Russell, a Green London Assembly member, national transport spokesperson and Islington councillor. “It is incredibly emotive.”

The Greens support low-traffic neighbourhoods though they have been critical about their implementation without “smart, fair road pricing” and other less blunt low-emissions measures. Russell emphasises they are not the “total solution” to pollution but “just one tool in the box aimed at enabling people to get around safely”.

Some of the backlash to LTNs feels as if it’s “built on from Brexit”, and also reminds Russell of other toxic divisions on social media, such as over trans rights. “It is unbelievably divisive and feels like it’s got that same energy which was in the Brexit campaign behind it.”

Nevertheless, Russell acknowledges that “people certainly feel their main roads are busier” in surrounding roads, despite evidence from some LTNs showing an overall drop in traffic, and “if people are stuck in a traffic jam at a local high street, then they’re going to just perceive that there is more traffic”.

The Greens would therefore improve communication with residents and local businesses regarding LTN implementation. “It’s a really big change for people – it’s ok if you’re someone who’s involved in transport campaigning and air pollution campaigning and you’ve got used to the idea, but for people who haven’t stopped to think about it, it is a massive change and one really has to acknowledge that.”

As the New Statesman reported last November, divisions over LTNs do not simply follow the usual right-left divides. Motorist loudmouths find themselves shoulder-to-shoulder with some disability rights campaigners and anti-gentrification activists, while earnest environmentalists stand side by side with the Tory government, some estate agents and the seasoned cycle lobby.

More Londoners support than oppose LTNs, according to exclusive polling for the New Statesman conducted on 13-14 January by Redfield and Wilton Strategies.

When asked about LTNs, 44% of respondents support the schemes compared with 21% who oppose the schemes (27% neither support nor oppose, and 9% don’t know).

Will people vote according to how they feel about LTNs on Thursday 6 May? Data shows a bounce in the time people are spending in their local areas – shopping and exercising locally – due to the pandemic, and the environment was a top-three voter priority for the first time in 2019, after all.

“I don’t think that in the end it will be just low-traffic neighbourhoods that drive the way people vote, but I think it is an issue,” says Green transport spokesperson Caroline Russell. “The overall issue of cleaning up our air and reducing our carbon emissions and making a healthier city is something that is resonating for a lot of people.”

Back in Levenshulme, an independent candidate and 20-year resident called Jeremy Hoad – the local Pride organiser and community activist – is vocal in his opposition to the LTNs in the area. “This unfair scheme is a shambles with poor engagement, consultation and a severe lack of evidence or a plan,” he told BBC North West.

Whatever happens in the ward that has been solidly Labour since 2014, all residents will be hoping for a resolution to the road wars soon. “The community spirit has been shattered by this, which is a real tragedy,” says local Dan Sims. “It’s going to take some really concerted leadership to repair it.”

Topics in this article : Demographics