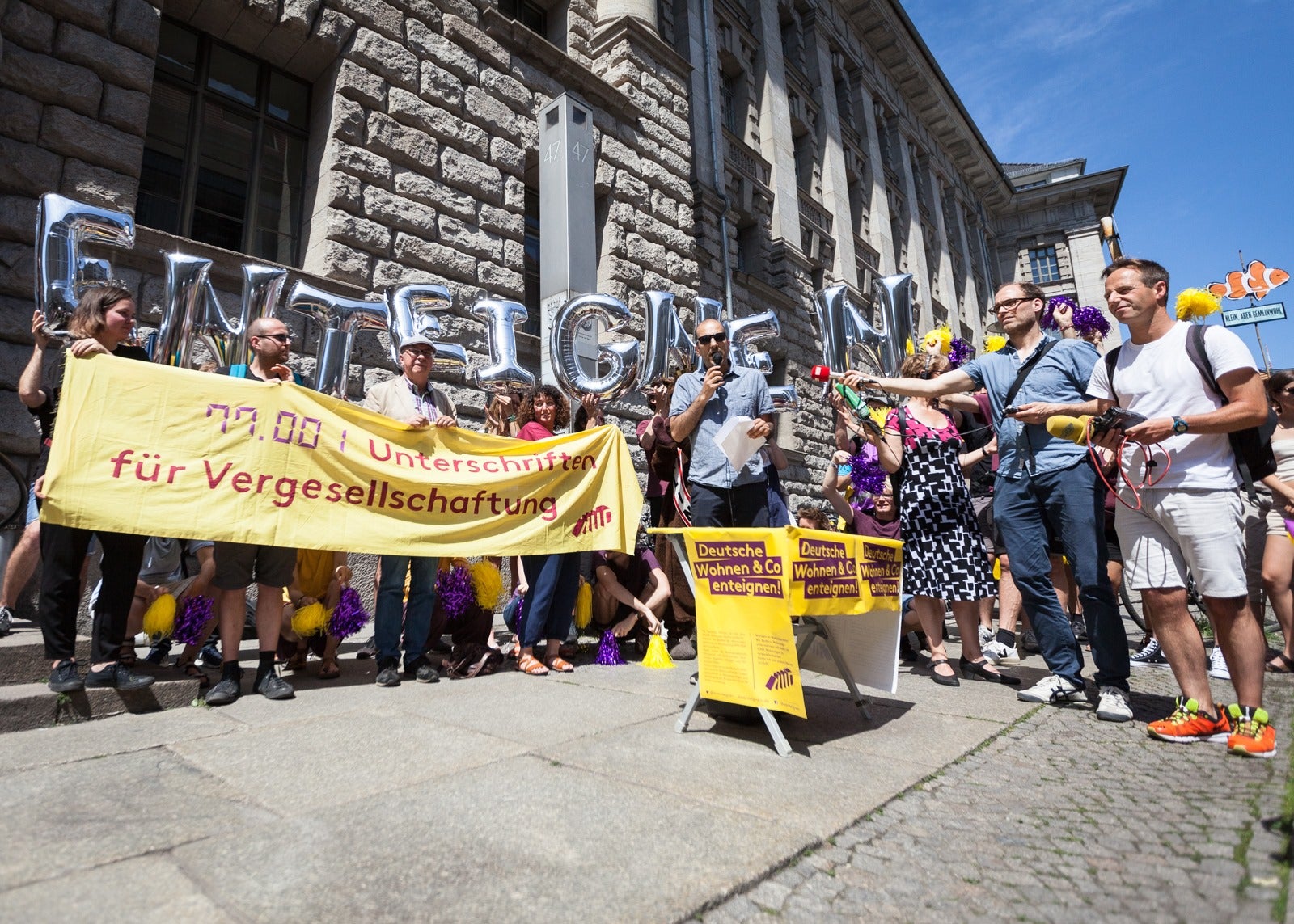 Activists are pushing for a referendum to return nearly a quarter of a million homes to the people. If successful, it would mark the reversal of a three-decade trend of mass privatisation. (Photo courtesy of Expropriate Deutsche Wohnen & Co)

Walk around the streets of the German capital for long enough and you’ll be confronted with a question, usually spray-painted on an apartment block: “Who owns Berlin?”

Graf is a member of the initiative Expropriate Deutsche Wohnen & Co, which advocates perhaps the most radical housing plan in Europe – expropriating 226,000 apartments to create a new generation of affordable housing to be owned in perpetuity by the people of the city.

The idea might sound improbable, but the group’s proposal for a referendum on the issue has already collected around 70,000 signatures and passed a vital legal check from Berlin authorities in September, which means a public vote next autumn is now a very real possibility. It would call on the government to expropriate all landlords that own more than 3,000 homes.

If successful, the measures would mark the reversal of a three-decade trend of mass privatisation. Since 1991, Berlin has sold over 200,000 public homes. Most have since fallen into the hands of a few major corporate giants like Deutsche Wohnen, which alone owns around 110,000 units in the city.

In the past decade, Berlin’s rents have skyrocketed, doubling since 2009. During this time, the big corporate landlords began renovating entire blocks of apartments, leading to the rapid gentrification of neighbourhoods. Tenant groups complained that landlords neglected essential repairs while pursuing surface-level “modernisation” programmes that allowed them to raise market rents, circumvent rent-control laws and force out low-income residents.

“Investors basically bought Berlin,” says Graf. “The situation was very hard, and a lot of people struggled finding affordable flats. There were a lot of evictions.”

Almost all of Berlin’s major landlords undertook more modernisations and fewer repairs than public-housing companies, according to research published by the Rosa Luxemburg Foundation in 2019. For investors, the strategy paid off: between 2012 and 2018, shareholders of the ten biggest landlords recorded average annual returns of 20%.

Expropriate Deutsche Wohnen wants the government to establish a public-housing body that can borrow funds to buy out companies for an estimated cost of €18bn ($21.25bn), with rental income then used to pay off the debt. A report by the Senate of Berlin estimated the cost to be significantly more, between €26bn and €36bn, the higher figure based on the market-value price of the companies.

The plan hinges on an obscure, never-before-invoked article of Germany’s 1949 Constitution that allows for the “socialisation” of private assets at a cost determined by the state. 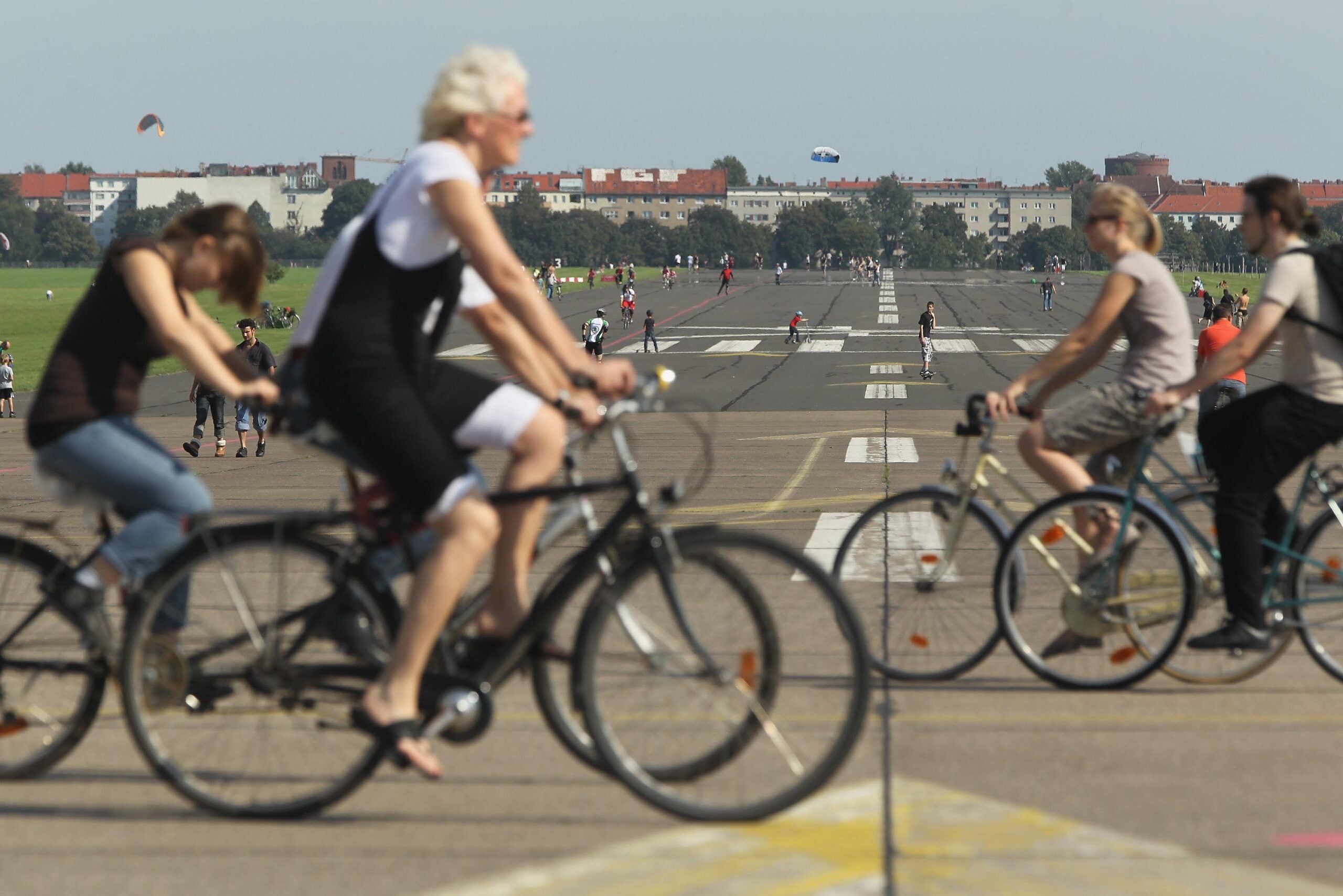 An activist referendum was successful in squelching development plans for Berlin’s iconic Tempelhof Airport. It is now a public park. (Photo by Sean Gallup/Getty Images)

Though referendums in Berlin are non-binding, they carry hefty political weight. Proposals to develop housing on the 300ha Tempelhof Field, a decommissioned airport transformed into a now-iconic public park, were put to bed in 2014 when the city voted to leave it untouched.

The exploration campaign launch in April 2019 was greeted by a flurry of media excitement, with some critics denouncing it as reminiscent of communist East Germany. But despite strong opposition, organisers quickly surpassed the 20,000 signatures required to kick-start the referendum process. Two polls conducted last year put public support for expropriation at 44% and 55%.

Not long after, Berlin’s ruling left-wing coalition proposed a rent cap, affecting 1.5 million apartments, that came into force in February, freezing rents for five years and cutting rates for many renters from 23 November. But campaigners for expropriation think the rent cap was an attempt to stifle more radical demands with a law that is time-limited and could be overturned in Germany’s Supreme Court next year.

So far, the cap has not dented Deutsche Wohnen’s finances – its stock value rose 17% this year, and the company announced on 13 November that it expects the value of its portfolio to rise by 6% despite the rent cap and pandemic.

Graf tells City Monitor more fundamental change is necessary to reliably guarantee affordable rent: “Within the market logic, private investors are protected. Private investors have the power to buy Berlin [while] tenants and normal people don’t have any say in it… we need a change in the whole system itself.”

The city’s major landlords have categorically rejected any sort of socialisation, which they claim has no legal basis.

The real solution to Berlin’s housing crisis is to build more homes, institutional landlords and lobby groups say. The expropriation could even exacerbate the problem by driving away the private investors who fund the construction of most of Berlin’s new housing, argues Haus und Grund, an association for real estate owners and investors.

“New construction is likely to come to a standstill,” says Haus und Grund’s head of legal affairs, Inka-Marie Storm. “The situation will probably not get any better for the tenant, [and] declining rents should not be expected.”

A Deutsche Wohnen spokesperson tells City Monitor that activists could create a fiscal catastrophe for Berlin: “Even if it were [legal], the costs for that endeavour would mean a collapse for the budget of the state of Berlin.”

“In the end, not a single flat would emerge from that, but it would take all the resources that a fast-growing city like Berlin needs so desperately to create reasonable development,” the spokesperson says.

Legal experts counter that expropriation is permissible under the country’s constitution, including three constitutional specialists consulted by the Berlin Senate last year.

“According to general opinion, Article 15 also covers housing companies,” says Benjamin Hersch, a Berlin-based lawyer specialising in residential property. He would expect, however, that companies would appeal in the Supreme Court.

The lack of precedent makes it trickier to know how much Berlin will be compelled to pay, adds Hersch. “Since there has been no socialisation practice so far, it can’t be said with certainty which method of compensation is constitutionally correct.”

The question of compensation will be all-important in deciding whether expropriation will achieve its aims of delivering affordable public housing, says Manuel Aalbers, professor of geography at the University of Leuven and author of The Financialisation of Housing.

“This could be a real win if the properties could be bought back for the original price, give or take some minor price corrections,” says Aalbers. “But – and this is a big ‘but’ – if the properties can only be bought for the current market price, a lot of money needs to be invested that could probably be invested better in social housing that would be constructed and managed by a public or non-profit institution.”

Today, the issue sits in the Berlin Parliament, where it has scant support among the city’s political parties.

In the governing coalition, the Left party backs expropriation outright, but the Greens are divided, and the centre-left SPD, while committing to adding 400,000 public homes by 2026 through construction and purchase, holds that expropriation is a step too far. All opposition parties are vehemently against the measure. If parliament rejects the proposal, campaign organisers will be tasked to undertake a second round of signature gathering beginning in late February.

With parliament near-guaranteed to reject the proposal, Expropriate Deutsche Wohnen will need to collect around 170,000 signatures within four months for the referendum to take place, most likely alongside state and federal elections in September. Thanks to Berlin’s famously ink-and-paper-loving bureaucracy, signatures cannot be submitted online and must be handwritten alongside a registered address. Coronavirus restrictions, which currently prohibit large events and public gatherings, will make that task all the more challenging.

Expropriate Deutsche Wohnen volunteers are already drawing up an action plan to cover every Berlin neighbourhood. They hope to regain their early momentum and public awareness, which were both diminished by the unprecedented 441-day limbo before September’s legal approval, a delay organisers suspect had political motivations.

If the measure ever does reach the ballot, it faces a tough battle, pitted against the entire real estate industry and most political parties. But for Graf, getting this far has delivered its own rewards, pressuring the government to introduce the rent cap and pulling back the curtain to reveal how international capital has exacerbated Berliners’ housing woes.

“I think that’s already a big achievement,” she says.

Ruairi Casey is a journalist focused on housing, politics and migration. He is based in Berlin.

Matthew Ponsford has reported on housing and cities for Thomson Reuters, Financial Times Weekend, the Guardian and CNN.

This article was developed with the support of journalismfund.eu. The production of this investigation was supported by a grant from the IJ4EU fund. The International Press Institute, the European Journalism Centre and any other partners in the IJ4EU fund are not responsible for the content published and any use of it.