Flinching as a gunshot whizzes past your window. Covering your ears when a police car races down your street, sirens blaring. Walking past a drug deal on your block or a beating at your school.

For kids living in picket-fence suburbia, these experiences might be rare. But for their peers in urban poverty, they are all too commonplace. More than half of children and adolescents living in American cities have experienced some form of community violence – acts of disturbance or crime, such as drug use, beatings, shootings, stabbings and break-ins, within their neighbourhoods or schools.

Researchers know from decades of work that exposure to community violence can lead to emotional, social and cognitive problems. Kids might have difficulty regulating emotions, paying attention or concentrating at school. Over time, kids living with the stress of community violence may become less engaged in school, withdraw from friends or show symptoms of post-traumatic stress, like irritability and intrusive thoughts. In short, living in an unsafe community can have a corrosive effect on child development.

Few studies, though, have specifically looked at the toll community violence may take on the growing brain. Recently, I studied this question in collaboration with a team of researchers here at the University of Southern California. Our goal: to see whether individuals exposed to more community violence in their early teen years would show differences in the structure and function of their brains in late adolescence. 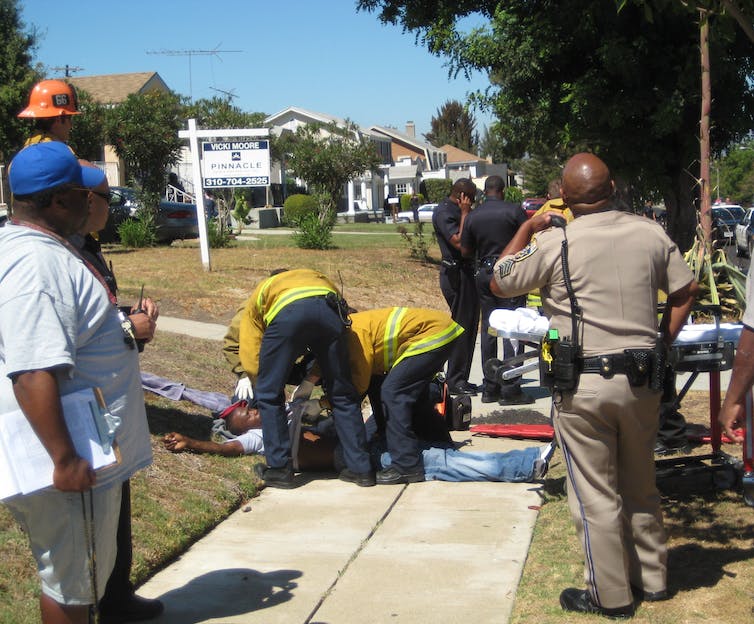 Connecting community violence to the brain

My colleague Gayla Margolin, an expert on youth exposure to violence, has been following a sample of Los Angeles-area youth for over a decade. When these teens were about 13 years old, she asked them to fill out a checklist of community violence experiences: hearing gun shots, witnessing a beating, seeing someone do drugs, watching someone get arrested or chased by the police, seeing someone get chased by a gang, or seeing someone get threatened with a beating or stabbing. For our current study, we added these items together to get an overall sense of how much violence each teen had witnessed in his or her neighbourhood.

About four years after they took the community violence survey, when the youth were around 17 years old, we asked 22 of them to lie down in a magnetic resonance imaging (MRI) machine while we scanned their brains. When we examined the images we’d collected, we zeroed in on two small but critically important structures near the base of the brain: the hippocampus and the amygdala.

The hippocampus, a curved structure shaped like the seahorse it is named after, plays a role in learning and memory. Stress hormones seem to shrink this structure, and adverse childhood experiences like abuse and neglect have been linked with smaller hippocampal volumes later in life. One recent review of research on child maltreatment found that early abuse and neglect predicted smaller hippocampal size in 30 out of 37 studies that looked at the connection.

In our current study, we also measured the size of the amygdala, an almond-shaped structure located close to the hippocampus that is known for its involvement in emotion and threat-related processing. Childhood adversity has also been tied to the size of the amygdala, although this research has been mixed: Some studies have found that people exposed to early stress show smaller amygdala volumes, some show larger amygdalae and some show no relationship at all.

In addition to looking at the size of the hippocampus and amygdala, we also looked at patterns of interconnection between these structures and other regions of the brain. Which parts of the brain “talked” more to each other, as reflected by more tightly correlated levels of activation?

A neural signature of community violence?

In our data, we found that witnessing violence in early adolescence predicted smaller volumes of both the hippocampus and amygdala in this group of teens.

We didn’t measure the absolute size of these structures – instead we tested the relationship between community violence and brain volume. In other words, if our participants told us at around age 13 that their neighbourhood were higher in crime and violence, the size of these critical brain structures looked smaller about four years later, compared to teens who reported less community violence. Interestingly, this link held up even after we controlled for the youth’s socioeconomic status (family income and education) and their present-day exposure to community violence.

We also found that, among youth exposed to more community violence, the right hippocampus showed stronger connections with other brain regions linked to emotion processing and stress, perhaps suggesting that these youth were more vigilant to potential threat. If you’re used to encountering dangerous situations, maybe you and your brain learn to stay alert to avoid the next potential threat that lurks around the corner.

Our study dovetails with other research on early stress and the brain but is the first to specifically look at the link between community violence and the size and connectivity of the hippocampus and amygdala. Our sample was quite small and limited by the fact that we scanned the youth only once, in late adolescence. Therefore, although our measure of community violence was collected about four years before the scan, we have no way of knowing for sure whether community violence actually led to changes in the hippocampus and amygdala. It’s possible these brain differences preceded the youths’ exposure to community violence. For these reasons, this study should be considered preliminary and needs to be corroborated by much more research.

Despite its limitations, this work takes a first step in showing that community violence is linked with detectable differences in the teen brain in ways that are consistent with other forms of early adversity like abuse and neglect. These effects might be due to stress hormones that flood the developing brain and affect the growth of neural structures like the hippocampus and amygdala.

Youth with smaller hippocampal volumes may show learning and cognitive difficulties, whereas smaller amygdala volumes have been linked with depression risk and behavior problems. In other words, if, as we suspect, community violence has a toxic effect on the brain, downstream effects may emerge both at school and at home. And those effects converge with the deficits in attention, cognition and emotion regulation that other researchers have already noted in youth exposed to community violence. They may even endure into adulthood and contribute to a cascade of risk for further problems in employment and education.

Although community violence may be widespread, that doesn’t mean it’s acceptable. Developing kids and teens deserve to feel safe at home, in their schools and in their neighbourhoods. As our results and those of many other studies show, growing up in a violent or chaotic environment seems to leave traces on the brain, and may put youth at risk for other problems down the line. Although we don’t usually think of street lights, after-school programs and revitalised park spaces as brain-building improvements, public investment in urban neighbourhood safety and quality may have wide-ranging benefits for teens at risk.