Kaliningrad and its new $300m “Arena Baltika” stadium has been thrown into the spotlight by the football World Cup. But will the city’s latest project finally succeed in eclipsing its pre-war German history?

Nestled between Lithuania to the north and east, Poland to the south, and the Baltic Sea to the west, Kaliningrad is today an “exclave” of Russia. But the region was once at the centre of European history and culture. 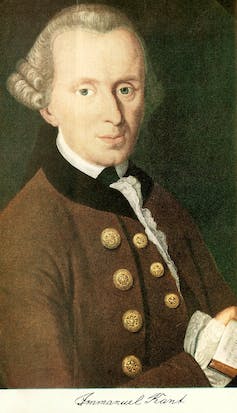 Founded by the Teutonic knights in 1225, Königsberg or “King’s Mountain” – as Kaliningrad was once known – first developed as a Hanseatic commercial centre, and was made rich through trade in people, goods, and ideas. Expanding as a Baltic port city, it became the capital of East Prussia, and remained the coronation city of the Prussian monarchy even after the capital was moved to Berlin.

A city of high culture, Königsberg became a capital for museums, theatre, art, and music. It was a hub in the German-speaking world for artists, musicians, philosophers and scholars of all kinds – famously serving as the lifelong home of the philosopher Immanuel Kant.

Although separated from Germany proper by the Treaty of Versailles, and undoubtedly tarnished by Nazi rule, prior to World War II Königsberg had existed as a vibrant and significant centre of modernist culture at Germany’s easternmost frontier. Yet the outbreak of war in September 1939 was to have profound consequences for the region.

Kaliningrad in context: the Russian exclave is shown in dark green, separated from the rest of Russia (in light green). Image: Wikimedia Commons.

Annexed by the Soviet Union in the wake of World War II, the region underwent one of the most radical erasures of history ever experienced. Due to its status as the USSR’s new westernmost frontier, the region took on a particular symbolic significance. From the outset, a clean break with the past was deemed essential for the Soviet project, and both city and region were renamed Kaliningrad, after Bolshevik revolutionary Mikhail Kalinin.

The indigenous German population was expelled, and the territory was almost entirely repopulated with citizens from elsewhere in the Soviet Union. Kaliningrad was envisaged as functioning like a Soviet version of turn-of-the-century New York City – creating Soviet citizens from a melting pot of peoples of different backgrounds in the same way that Americans had emerged from a diverse New York.

Central to this reorientation towards the east was to replace the remaining German architecture – already heavily damaged by RAF bomber raids during the war – with gleaming examples of Soviet Modernism. Most symbolically, following direct orders from Soviet leader Leonid Brezhnev in 1967, the remains of the former Königsberg Castle that had once adorned the highest point in the landscape were levelled and replaced by a new building, the House of Soviets (Dom Sovetov). Overtly futuristic in design, it was to provide the physical manifestation of the societal transformation brought about by communism – a beacon of Soviet power at its westernmost frontier. 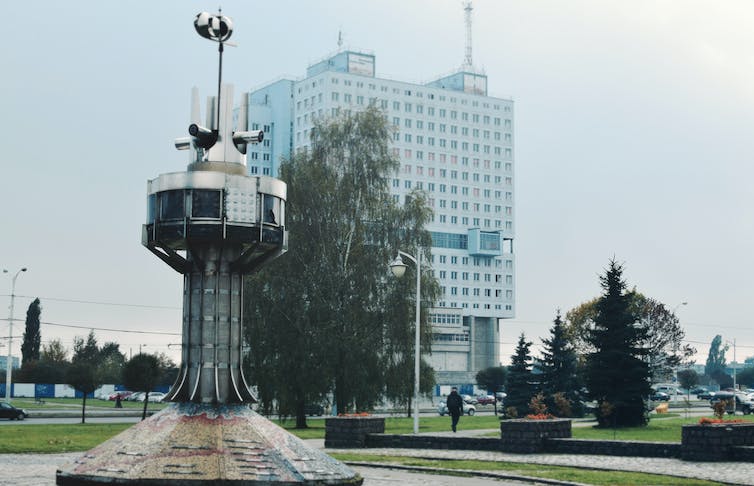 Yet the House of Soviets was never finished. Today, it stands empty, as it has done for more than 30 years. Referred to by locals as “The Monster”, it continues to occupy the central part of the city, standing as an uncomfortable monument to a history trying to be forgotten.

In the official 2018 World Cup tourist guide, for example, the only reference to this founding pillar of Soviet Kaliningrad is as a point from which to direct visitors to the city to a plaque located on the rear wall of the castle ruins, on which is written one of Kant’s most famous quotes: “Two things fill the mind with ever new and increasing admiration and awe, the more often and steadily we reflect upon them: the starry heavens above and the moral law within.”

In fact, visitors to the city will find little mention at all of the Soviet history upon which Russian Kaliningrad is built. Since the fall of the Soviet Union, far greater focus has instead been devoted to pointing towards the region’s former German heritage, such as the 19th-century Koenig Gate, or Kant Island and its restored Königsberg Cathedral, which dates back to 1333 but was a ruin as recently as the 1990s. Even the “fishing village” gets a mention – a Disneyland-like “German” complex said to represent what the future centre of Kaliningrad will look like following its eventual reconstruction. 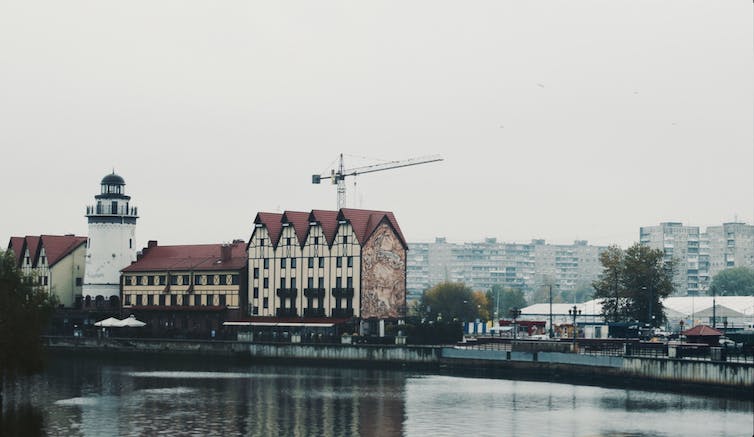 In other words, the focus has been on the history not just of, literally, a foreign country, but that of a city that had ceased to exist prior to the arrival of Kaliningrad’s current inhabitants – and the very same history that the Soviets spent nearly half a century trying to erase.

But the extravagance of the new 35,000 capacity Arena Baltika – in a city where the local team, FC Baltika, typically attracts just 4,000 fans – is an attempt to once again use bold architectural statements as a means of shifting the region’s focus back towards the east.

Yet it is also a reminder to the West of Vladimir Putin’s exclave in the very heart of Europe; home to the Russian Baltic Fleet base and, most recently, a permanent holder of the “Iskander-M” mobile short-range nuclear-capable ballistic missile. As one of the most militarised regions of Russia, there is undoubtedly more at play here than just football.